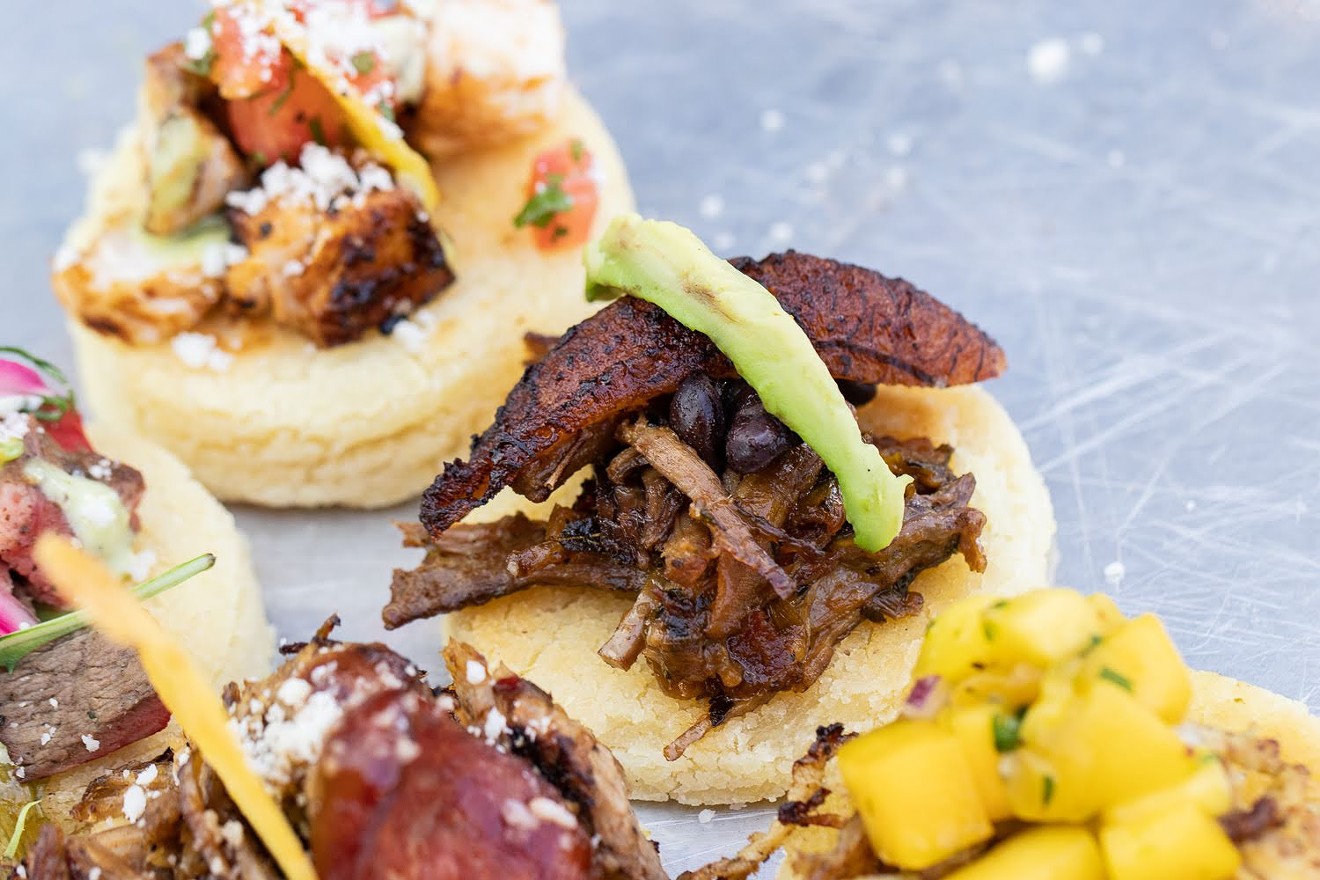 At the new Que Sazon, look for dishes like mini arepas with pork and chorizo or pollo and mango. Que Sazon
Downtown Phoenix’s Heritage Square is gearing up to welcome three new places to eat and drink next month, giving a boost to the historic area known for its repurposed, quaint turn-of-the-20th century homes. Here’s what to expect. Evelia Davis is opening a restaurant in Heritage Square called Latha, devoted to foods of Africa and the African diaspora.
Evelia Davis

628 East Adams Street
Latha, which means “flavor” in Swahili, is opening in the Silva House which used to hold The Rose and Crown, directly across from Pizzeria Bianco. It should begin taking reservations in mid- to late February.

“The menu is basically a celebration of the flavors of Africa and the African diaspora: Brazil, the Caribbean, and the southern U.S.,” according to owner Evelia Davis. “That’s where most of the diaspora is and where they’ve had the most influence on the food.”

She’s working with Digby Stridiron, an acclaimed chef from St. Croix, to create the cuisine. Diners might see tagine from northern Africa, jollof rice from West Africa, or jerk chicken from the Caribbean, for example.One of the goals is to help people discover how food is interconnected throughout the diaspora, according to Davis.

“Jollof is a really important dish in west Africa, but in the U.S., we have jambalaya,” Davis notes, which has many of the same components, like tomatoes, onions, peppers, and spices.

“As someone’s taking a bite, taking a sip, a lot of times there will be things that are familiar that will help them make those connections," she says.

And yes, the drinks will be as thoughtful as the food.

“We’re curating a selection of wine, beers, and spirits that are owned, made, or designed by Black artisans,” Davis says. Latha, a restaurant serving foods of Africa and the African diaspora, is expected to open in February in Heritage Square.
Geri Koeppel
In addition to the restaurant, the space will designate one room as a soko, which means market in Swahili, to sell a curated selection of jewelry, clothing, and home decor. Davis, who has 30 years of corporate retail experience, already runs an online marketplace, The Diaspora Collective, showcasing goods made or designed by artisans from Africa and the African diaspora, including local makers. 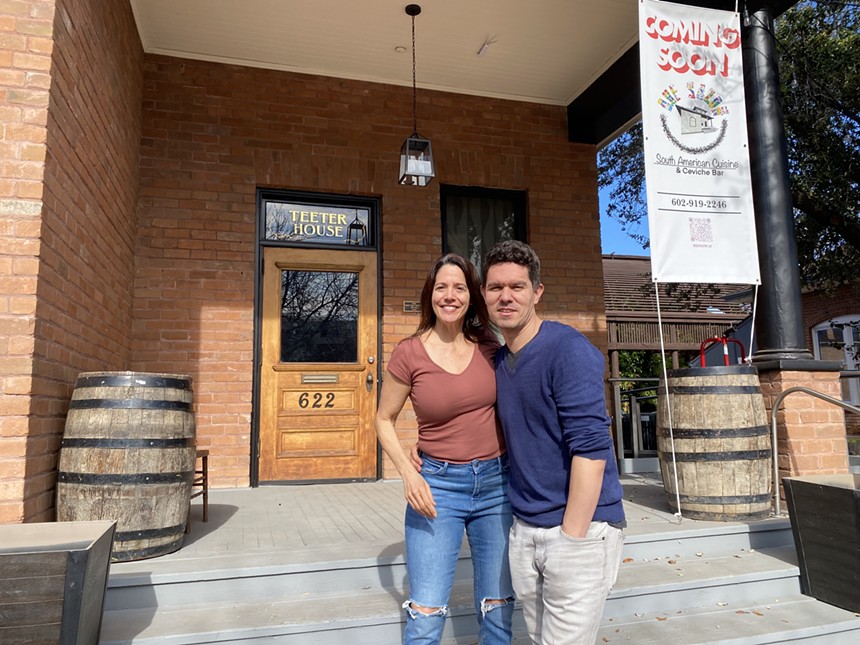 Julie and Fabian Ocampo say to expect a casual, fun ambiance and diverse menu of South American flavors at the new Que Sazon in the Teeter House.
Geri Koeppel

622 East Adams Street
Food truck fans undoubtedly remember the acclaimed Que Sazon, named Phoenix New Times’ Best Food Truck in 2017, the year it launched in Phoenix. The concept had a previous iteration in St. Louis, where the owners lived before moving to the Valley.

But the truck closed in March 2020 due to the pandemic and then took a hiatus. Now, husband-and-wife owners Fabian and Julie Ocampo are reviving their South American concept. They plan to open in the Teeter House, next door to Latha, sometime before Super Bowl weekend.

“When we shut down and then we sold the truck, we were going to do other things,” Julie Ocampo says. “We went to Spain for three months. We explored ideas, options.”

But they decided to open a brick-and-mortar eatery, which they’ll run with their kids Kaylee, 14 and Sebastian, 17, and Julie’s dad, Lenny Arky. 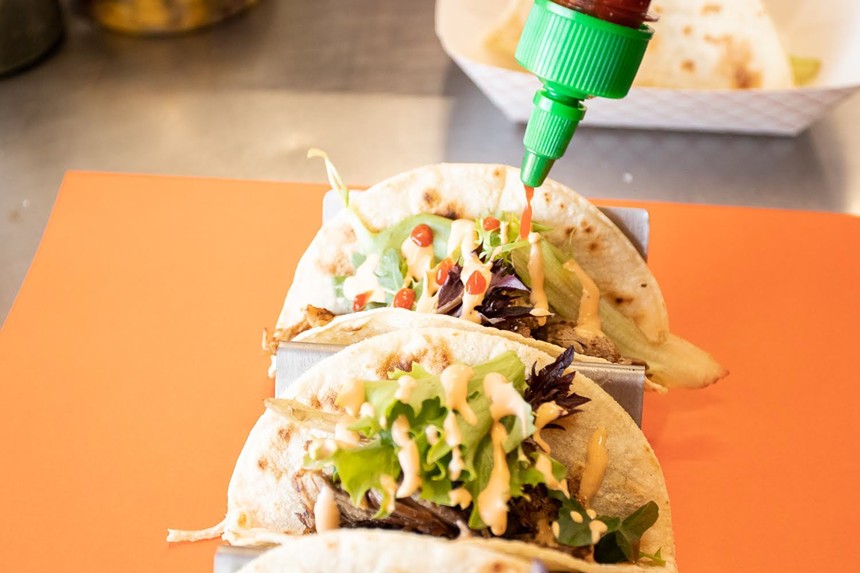 Que Sazon's spicy pork tacos with chipotle aioli and drizzled sriracha will be on the menu at the new restaurant.
Que Sazon
Loyal customers will be happy to hear that Que Sazon will bring back many of the food truck faves such as empanadas, loaded fries with shredded chicken or slow-roasted marinated pork, and rice bowls heaped with meat, black beans, chimichurri, and chipotle aioli. Vegetarian and gluten-free options will be available again, too, along with new dishes that Fabian is devising.

“I’m trying to get the best of South American countries,” he says. “I’m Colombian, but we’ll have some Brazilian, Argentinian,” as well as arepas, which are also popular in Venezuela, and Peruvian-style ceviche. Plantains also will figure prominently on the menu.

Drinks will complement the cuisine, with a few beers, a couple of wines, sangria, and a condensed selection of spirits to make cocktails like mojitos, Julie says.

“It’s more about having a little drink with all this incredible food to try,” she notes, rather than being a full bar.

Que Sazon — which translates to “what a flavor” — will have a casual ambiance with about 40 seats inside and 44 outside underneath string lights on the newly paved patio.

Inside, look for soothing midnight blue walls with a hint of teal, Colombian art, refinished blonde wood floors, a five-seat bar with lighting that changes colors, and big-screen TVs for watching sports including, of course, fútbol and the upcoming Super Bowl. 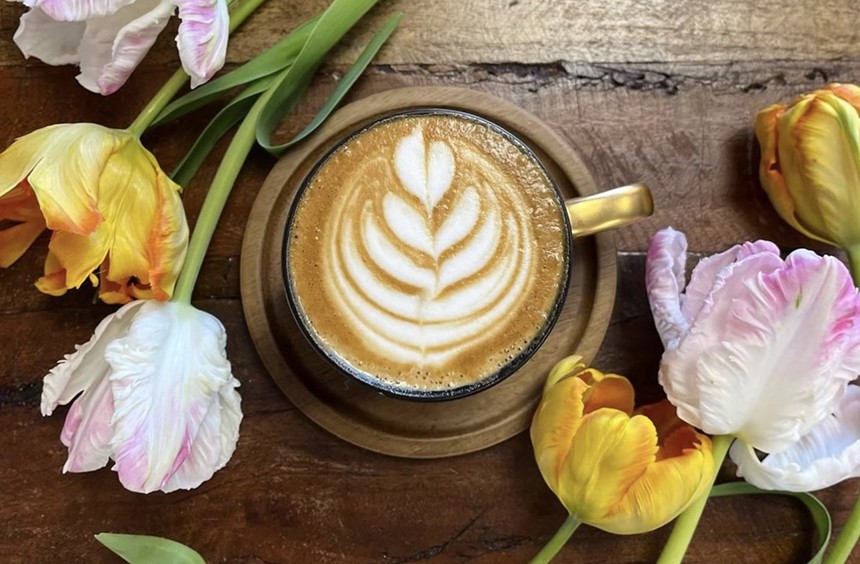 Stemistry uses beans from Ubora Coffee Roasters in Georgia and uses flower and botanical extracts in some of the drinks.
Stemistry

618 East Adams Street
The second location of Stemistry — the first opened in north Scottsdale last year — will be tucked behind Que Sazon in the 700-square-foot Teeter Carriage House, where Royal Coffee used to be. It’s notable for its build-your-own bouquet bar, Instagram-worthy coffee drinks, and the fact that it’s owned by a teenager.

Dylan Capshaw started the business when he was 15 years old as a way to join his dual passions of flowers and coffee. This location will offer much of the same as the original, including breakfast and lunch foods, events and classes, and seating for about 12 inside and eight outside.

Capshaw, now 16, says he went through an extensive application process when pursuing the location, but he persevered because he’s “a big history buff” and always loved Heritage Square.

“I didn’t want to give up, because it would be too cool to be in a historic building like that,” he says.

In fact, this location will feature drinks named after early area residents, such as the “Edward Haustgen” and “Eliza Teeter.” Stemistry is expected to open in February in the Teeter Carriage House, selling coffee, sandwiches, baked goods, and flowers.
Geri Koeppel
Stemistry sources beans from a specialty roaster in Georgia called Ubora, and flower and botanical extracts are used in many of the coffees, including the signature rose latte.

“The first taste you get is of coffee, and then you get the hint of rose, which is pretty cool, and we top it with rose petals as well," Capshaw says. Stemistry also makes a “24K Gold Latte” with real gold leaf on top.

“All of our drinks come with fun toppings so they’re all photogenic,” Capshaw says, adding that they also sell tea and boba drinks. The food menu will feature sandwiches and pastries.

“Our most popular lunch sandwich is our Buffalo chicken on ciabatta,” Capshaw says, adding that the croissant pizzas also are a hit: “It’s kind of sweet and savory. Those always fly.”

Other favorites, he says, include blueberry croissants, muffin tops, danishes, quiches, and egg bites with spinach and bell pepper.

This location will rent picnic baskets so patrons can easily take items to go. He's hoping Arizona State University students from the nearby downtown campus might use them for a study session or date, Capshaw says, and he’ll offer student discounts on certain days.

Stemistry’s grand opening in Heritage Square will run from 10 a.m. to noon on February 4, and will feature free rose lattes, free samples from vendors, and live music. Once the shop is open, hours will be 7 a.m. to 5:30 p.m. Monday through Saturday.
KEEP PHOENIX NEW TIMES FREE... Since we started Phoenix New Times, it has been defined as the free, independent voice of Phoenix, and we'd like to keep it that way. With local media under siege, it's more important than ever for us to rally support behind funding our local journalism. You can help by participating in our "I Support" program, allowing us to keep offering readers access to our incisive coverage of local news, food and culture with no paywalls.
Make a one-time donation today for as little as $1.
Geri Koeppel is a professional writer, voracious reader, devoted traveler, and an amateur cook, wine drinker, birder and tennis player. She's lived and worked in Detroit, San Francisco, and Phoenix.
Contact: Geri Koeppel
Follow:
Instagram: @gerikoeppel