The Michelada Con Comerons at Pescado Borracho is served with chips and salsa. Mike Madriaga
Spicy, tangy, and sometimes sweet micheladas are available with a range of flavors, colors, and over-the-top garnishes at bars and restaurants throughout metro Phoenix.


In Mexico, where the michelada was supposedly invented, folks mix their beers with Clamato or Camaronazo juice — tomato juice flavored with spices and clam or shrimp broth. The cocktail is sometimes referred to as the Mexican bloody mary, and some bartenders take that connection to another level, mixing vodka with the beer to up the alcohol content.

The word michelada translates to "my cold beer," originating from the Spanish words "mi", which translates to my, "chela," a slang term for beer, and "ada," the last three letters of the word helada, which means cold.

While the drink's name origins are clear, there's no official way to make a michelada. But four components seem to be constants at bars on both sides of the border. You need beer, a tomato-based drink, lemon or lime juice, and spice.

Here are three metro Phoenix destinations for refreshing and spicy micheladas that both cool you down and bring the heat. It's called a Michelada Con Comerons; the later end of the $11 beverage's name is a word play on "cameron," Spanish for shrimp.
Mike Madriaga

2540 South Val Vista Drive Suite 104, Gilbert
480-857-2793
Pescado Borracho, which translates to the drunken fish, is known for its tequila-battered red snapper. But this Gilbert spot makes an equally unique beverage called a Michelada Con Comerons. The later end of the beverage's name is a word play on "camerones," Spanish for shrimp.

Aesthetically, the drink is over the top. The goblet-style glass is topped with a massive shrimp, a propped upside-down beer bottle, and a garnish of cucumber, jalapeño, and lemon and lime wedges floating in the middle.

The jumbo shrimp and other seafood served in the restaurant are wild caught and flown into the Valley. The drinks also come with complimentary house-made chips and salsa for the perfect sweet and salty snack. 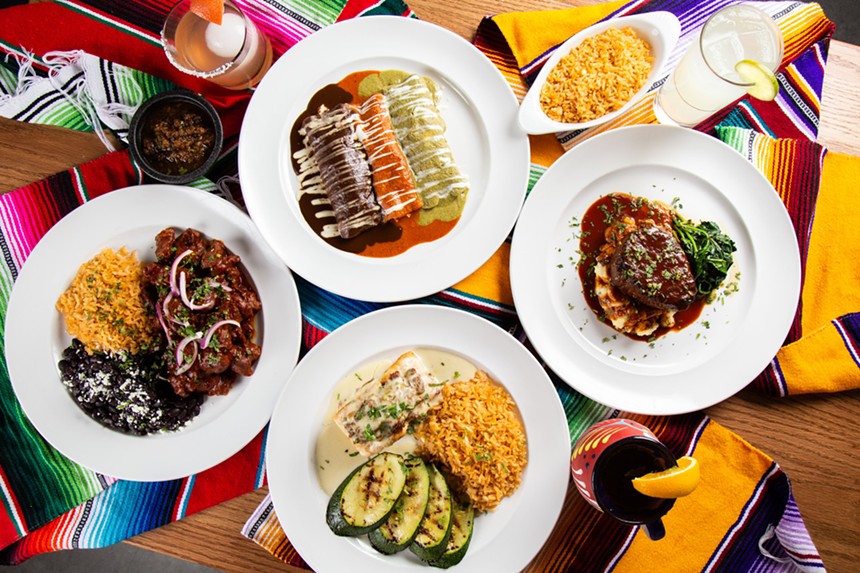 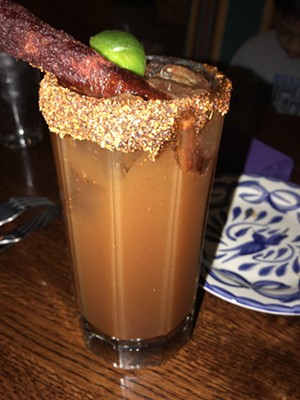 The Michelada Chingona comes with a menacing-looking tamarindo candy stick, doubling as a sweet and tart drinking straw, propped up on top of the glass.
Mike Madriaga
Colorful Mexican restaurant Barrio Queen has locations around the Valley from Gilbert to Glendale and Tempe to Avondale. At the modern, bright restaurants, decorated with Día de Los Muertos-themed artwork, the menu is full of fresh dishes made from old-school recipes. The theme is carried over to the distinctive Michelada Chingona.

The drink starts with ice-cold Modelo Especial. Then, bartenders add a punch of spicy house-made Vampiro mix. Next, a glass is drizzled with tamarindo paste, and Tajín, a powdered mixture of peppers, lime, and salt, is sprinkled on top. Finally, a menacing-looking tamarindo candy stick, doubling as a sweet and tart drinking straw, is propped up on top of the glass next to a lime wedge.

At Barrio Queen, the micheladas take on a brown color from the tamarind, rather than the usual punchy red. But these spicy sips are delicious nonetheless. 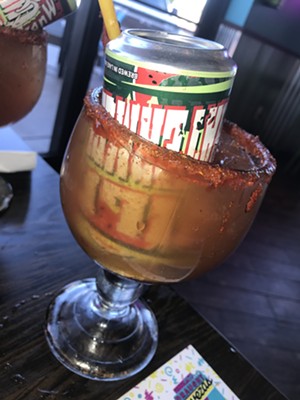 At K-38 Beach Mex Cantina there are pineapple, mango, and watermelon flavored beers fused with a house-made Clamato mix and tamarindo candy.
Mike Madriaga
Like the cantinas in the Mexican beach town, the Chandler-based taco, torta, and burrito restaurant also offers many varieties of margaritas and micheladas.

There are five different types of micheladas including the Michelada De Casa, made with a house-made Clamato mix, tamarindo candy, and a choice of light Modelo Especial or dark Modelo Negra beer.

Other options include pineapple, mango, and watermelon flavored beers fused with Clamato mix and tamarindo candy, or our favorite, the Verde michelada made with a spicy cilantro and lime aguachile broth, cucumber, and Modelo.

The photogenic drinks match the decor, as the place is filled with pastel and bright-colored furniture with Mexican blanket-styled tablecloths. Up top, piñatas hang about, and Talavera tile accents are plastered below the bar. There's a wall adorned with paper flowers from floor to ceiling and another wall decked out in drawings depicting lucha libre masks, margaritas, beer bottles, and tacos. Grab a michelada and snap a pic with the perfect backdrop for your sweet and spicy cravings.
KEEP PHOENIX NEW TIMES FREE... Since we started Phoenix New Times, it has been defined as the free, independent voice of Phoenix, and we'd like to keep it that way. With local media under siege, it's more important than ever for us to rally support behind funding our local journalism. You can help by participating in our "I Support" program, allowing us to keep offering readers access to our incisive coverage of local news, food and culture with no paywalls.
Make a one-time donation today for as little as $1.