Nine Nerdy Things to Do This September in Metro Phoenix

Cosplaying characters from My Hero Academia, currently one of the most popular anime cartoons. Benjamin Leatherman
Geekiness abounds in the month of September in metro Phoenix. You can start the month attending the biggest convention that’s been staged since the pandemic began and end it with local drag queens celebrating banned books.

In-between will be opportunities to go to a Carrollian tea party worthy of the Mad Hatter, grab some gaming gear, participate in a mockup of The Amazing Race, and see one of the schlockiest B-movies of all time.

Without further ado, here are the nerdiest events happening in the Valley this month.

Otaku, anime fans, and weeaboos of the Valley rejoice. Japanese pop-cultural event Saboten Con makes its long-awaited return this weekend after taking a pandemic pause last year. As one might expect, given COVID-19’s continued spread, there will be safety protocols in place during the event, which runs from Friday, September 3, to Monday, September 6, at the Sheraton Phoenix Downtown, 340 North Third Street. Masks must be worn at all times and social distancing will be encouraged.


Four days of activities are planned for this year’s con, including panels, concerts, a cosplay masquerade, maid cafes, and more. Special guests include J-rock band Kazha and voice actresses Olivia Hack, Jackie Lastra, and Faye Mata. Hours vary. Admission is $20 to $35 per day and $60 for a full pass. Complete details can be found here. Benjamin Leatherman

If you’d like another spot to show off your costumes and get in some joystick action, Endgame, 1233 South Alma School Road in Mesa, will put on the three-night “Labor Day Expansion Bash” from Friday, September 3, to Sunday, September 5. It will have a geek-friendly flair with Endgame’s resident selection of PCs and consoles available for play sessions, artist and vendor tables will be set up, and cosplay encouraged throughout the weekend. Various electronic dance music DJs and hip-hop artists will perform each night in the main room and upstairs lounge. Activities start at 9 p.m. on Friday and Saturday and 4 p.m. on Sunday. General admission is $30 to $40 per day and bottle service packages are $750. 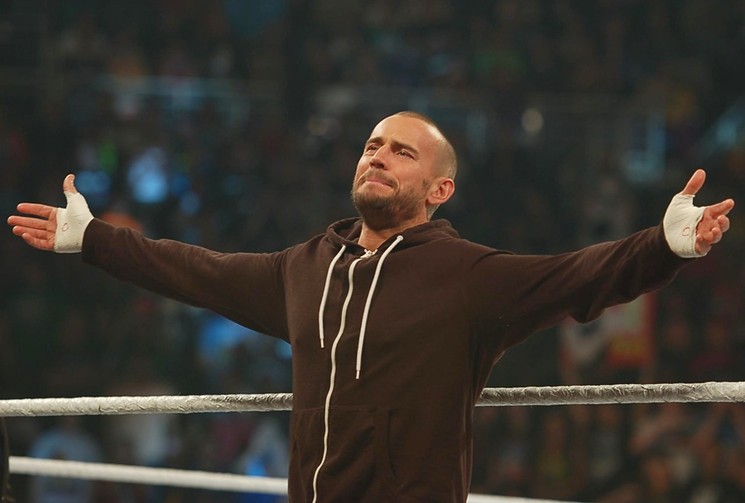 See CM Punk during AEW's All Out on Saturday at local AMC and Harkins movie theaters.
Benjamin Leatherman

AEW All Out Screenings

If you’re a fan of All Elite Wrestling, Sunday, September 5, will be a red-letter date in the short history of the upstart promotion challenging the WWE’s market dominance. AEW’s biggest pay-per-view of the year, All Out, will be happening in Chicago and the legendary CM Punk will have his first match in seven years. And you don’t necessarily have to pay your cable company per viewing of this event as it will screen at several participating Harkins and AMC movie theaters across the Valley starting at 4 p.m. Admission is $20 per person.

They’ll all be a little mad at the Whining Pig, 5030 East Ray Road in Ahwatukee, during this off-kilter and Carrollian-inspired costume party on Friday, September 10. Drink specials will be available, but none of the adult beverages offered will shrink you (we think). Swag for the best costume will be awarded and an Alice in Wonderland trivia session will start at 6 p.m. Admission is free. 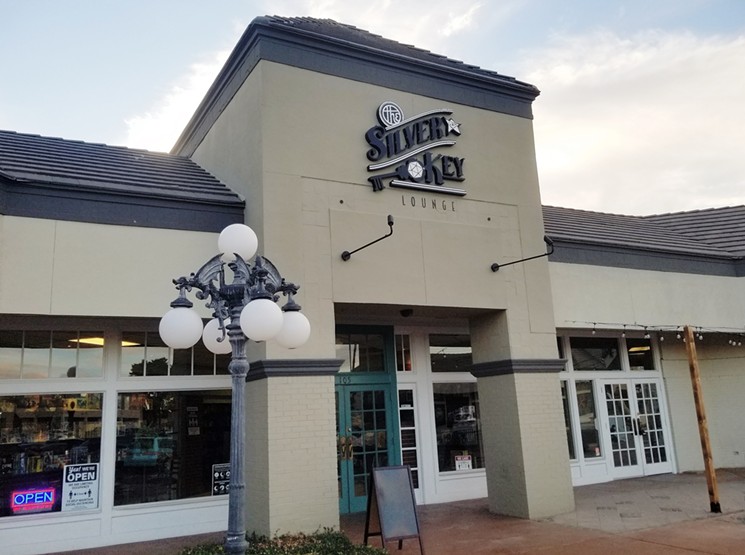 The exterior of The Silver Key Lounge in Mesa.
Benjamin Leatherman

Could you really use a set of tungsten dice or some gently used tabletop titles to add to your growing game den? The Silver Key Lounge, 1837 West Guadalupe Road in Mesa, will stage the latest edition of its sellers market from 9 a.m. to noon on Saturday, September 11. Dozens of vendors and local collections will have tables at the event. Beer and wine specials will be available and there might be play sessions happening. It’s free to attend and $5 for a table. Load-in time is 8 a.m.

Geeks know a thing or three about masks, so this annual festival covering face coverings and celebrating their role in Indigenous cultures feels right up the alley of local nerds. The three-hour event from 2 to 5 p.m. on Sunday, September 19, at Mesa’s Pioneer Park, 526 East Main Street, will include large-scale puppetry, masked performances by local dance troupes and theater companies, and more. Attendees are also encouraged to wear masks. Admission is free.

Downtown Phoenix’s FilmBar and the Nile Theater, 105 West Main Street in Mesa, will stage the first edition of their monthly collaborative project, FilmBazaar, on Sunday, September 26. It’s a record/movie swap (where people can buy and sell their favorite music and films) from noon to 3 p.m., followed by a screening of a fan favorite or cult classic flick. And for the very first FilmBazaar, organizers picked 1984’s The Toxic Avenger, one of the best bad movies ever made. There’s a $5 cover charge. Full details are available here.

Valley residents who have always wanted to appear on the hit reality competition The Amazing Race (but can’t get their audition video seen) should consider participating in a smaller-scale DIY version happening in Ahwatukee on Sunday, September 26. Ditto for anyone up for an outdoor adventure or down to get some exercise. The event will be similar to the show in its setup and execution: Teams of two or more people will race around a certain area and complete various mental and physical challenges in order to progress. If your team can get the tasks done and make it to the finish line first, you win. The race will run from 2 to 5 p.m. and there’s a $100 entry fee per team. Registration and details can be found here.

The Mesa location of Bookmans Entertainment Exchange, 1056 South Country Club Drive, will celebrate the 2021 edition of Banned Books Week, which celebrates forbidden literature, with this virtual storytime session on Sunday, September 26, featuring readings by the performers of Drag Story Hour AZ. Miss Felicia Minor will read passages and pages from some of her favorite banned books from noon to 1 p.m. via their website. It's free to watch.
KEEP PHOENIX NEW TIMES FREE... Since we started Phoenix New Times, it has been defined as the free, independent voice of Phoenix, and we'd like to keep it that way. With local media under siege, it's more important than ever for us to rally support behind funding our local journalism. You can help by participating in our "I Support" program, allowing us to keep offering readers access to our incisive coverage of local news, food and culture with no paywalls.
Make a one-time donation today for as little as $1.