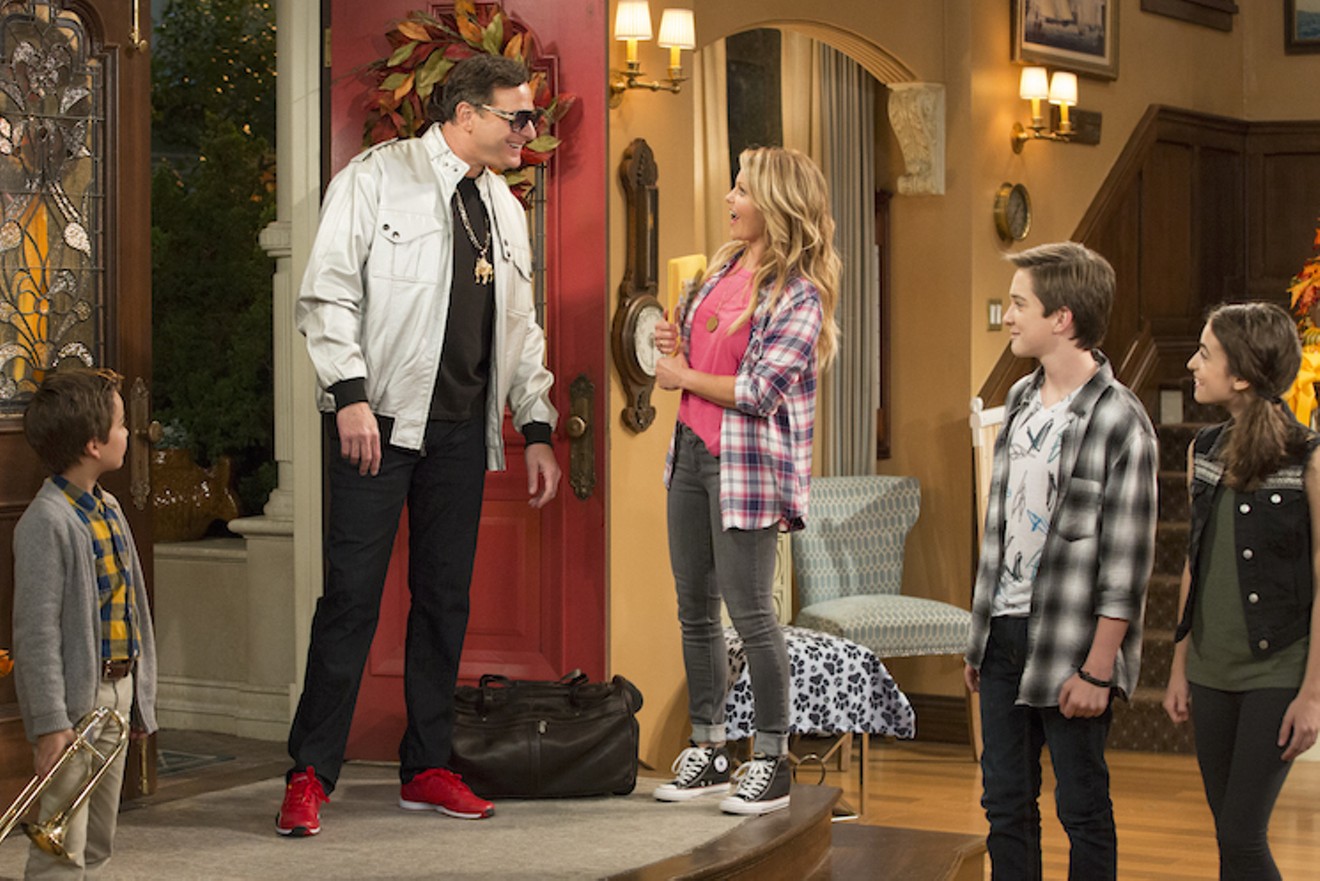 During the first season of Fuller House, we were fairly irritated by the amount of time the O.G. cast – Danny, Jesse, Joey, and Becky (or any combination thereof) – spent popping in and out of the show, derailing the storylines of the DJ, Steph, and Kimmy. Obviously, this is the Fuller House that nostalgia built, but their appearances were mostly just a series of catchphrases: "Have mercy!" "Cut it out!", "Watch the hair, huh!" and that damn woodchuck. It was a disorienting detour from what was supposed to be character development for the ladies of the house and their children. That's why we applaud the writers for resisting the urge and waiting until season two's sixth episode to bring everyone back again.

At last, a family reunion happens under completely believable circumstances: a family Thanksgiving celebration. Mama Deej is in charge, running drills with the current residents (plus new official boyfriend, Matt) to prepare for the arrival of house guests. Yes, she did say, "It's going to be a very full house." Har, har, har. The first to arrive is Danny, flying solo as his wife, Teri, is with her family for the holiday. Let's stop there a minute to point out that the entire first season Danny's wife did not have a name. She was never properly introduced in the premiere, and then preceded to never be seen again. Unless they were doing some next-level trolling, that was the most perplexing part of the whole season.

Danny's in the midst of a very obvious midlife crisis, donning a shiny jacket and red kicks, with a Ferrari parked in the driveway. He says things like, "Mos def, Steph" and "You and Donna Jo getting jiggy wit it?" to a shellshocked Matt. He even has a wildly over-the-top accent, so much so that we wonder just how much Bob Saget was phoning it in. Anyway, the family's biggest concern was how he'd take the news that Stephanie is dating Jimmy Gibbler. She can thank his newfound outlook for the fact that he welcomed Jimmy to the family with open arms.

Baby fever when you hold me tight, baby fever in the morning, baby fever all through the night.
Michael Yarish / Netflix
Next to arrive are Jesse, Becky, Nicky, and Alex. The twins don't have much to say, though it seems they graduated college and now run a "mildly successful" fish taco truck.  Mom and Dad walk in fighting, but we're not told until later what it's about. Apparently Becky's well-documented baby fever from last season hasn't gone away and she's been trying to talk her husband into adopting a baby. He's kind of over it, having helped raise Danny's girls and then two of his own. He feels too old (he kinda is, sorry ladies) but she insists that he's not. They agree to put it all aside for the weekend, although it's definitely top of mind.

Later in the episode, in order to keep the peace, Stephanie coaxes Jesse into helping put Tommy Jr. down for a nap. This was, of course, to prove to him that despite his age, he still has a way with kids. He bypasses the print version of The Little Engine That Could, instead reading it with his famous Elvis impersonation. Becky catches a glimpse of this adorableness, and instead of making her fever worse, she realizes that he's paid his dues. He should be able to stay retired from diaper duty, and she only wants to adopt if he's in 100 percent.

The Gladstone children are as extra as you'd expect them to be.
Michael Yarish / Netflix
The biggest shocker is Joey, who also had a bit of a mysterious introduction last season. He was around for several episodes, sporting a wedding ring, but all we were told was he lives in Las Vegas now and has a nightly comedy show. The girls seemed kind of concerned when he volunteered to babysit and was his usual goofy self. That's why it was surprising to not only meet his wife, Ginger (a magician, because of course), but also their FOUR children: Jerry, Lewis, Phyllis, and Joan. It was also a surprise to DJ, who never got an RSVP from them, and had to shuffle sleeping arrangements at the last minute. Classic Gladstone.

As you might have suspected, these four are funny, outgoing, and way out of control. They raid Ramona's room for makeup and tie up Jackson and Max while shooting them with Nerf guns. When the regular residents get fed up, they all move to the living room, where the brat pack later attacks and deflates the air mattress. Unable to take it anymore, Kimmy is appointed as the as the person to tell them to shape up or ship out. However, the minute he pays her a compliment, she totally caves, so much so that she invites them to stay "as long as they want." They decide to be there another week, so get ready for more Gladstone chaos next episode.

Familiar guest stars are every where you look!
Michael Yarish / Netflix
In addition to the family, DJ invites her boyfriend, Matt, and her former beau Steve (along with his girlfriend, CJ) to participate in the festivities. However, no one told Steve that DJ had ultimately picked Matt, and he seems really anxious about it even though he has a hot babe on his arm. He made it a point to allude to the relationship's eventual failure, citing the lousy odds in a toast over dinner. Cool buzzkill, Steve. You had your chance, buddy.

As you can see, it was a lot to manage, and DJ is losing it, even abandoning the family photo because no one can focus. She can't even commiserate with fellow perfectionist Danny, because he's off the deep end, literally talking about riding a hoverboard to the pier and skinny dipping. She's tasked with getting the real story from him. He admits that a "near-death experience" (a bookshelf almost falling on him) made him realize that he wasted his life being a cardigan-wearing neat freak. He just turned 60; what's it all about anyway? She reminds him that there's a whole house – a full house, if you will – of people who it's "all about." He's the one brought them all together, that's what's important.

That spirit of family must have spilled over to Jesse, who all of the sudden decides he's ready to adopt a baby. Let's just hope his or her hair genes are as good! After using the prayer to one more dig at an absent Michelle ("Come, it'll be fun!" Jesse says directly to the camera) the rest of the episode is a long pan around the table, full of the kind of love, laughter, and hugs that power this revival.