9 Nerdy Things to Do This September in Phoenix

Peep these nine events for nerd-types this September, including a screening of Fast Times at Ridgemont High. Universal Pictures
This September in the Valley, things are gonna get musical, mystical, and a little spooky. (Halloween season can start any time it wants, and it seems like it has already.) Also on the docket are: a visit from at least one nerd-horror icon, a VHS marketplace, some Bowie covers, and a few DIY events, of course.

Here's your guide to nine nerdy things to do in metro Phoenix this September.

A trio of Attack on Titan cosplayers zoom through the crosswalk at Third and Van Buren streets outside of the Sheraton Grand Phoenix Hotel.
Benjamin Leatherman
Saboten Con
Saboten Con (or cactus convention) is a massive anime convention held in downtown Phoenix over Labor Day weekend. Put on by Monkey Paw Entertainment, Saboten Con is billed as “Arizona's Premier Japanese Pop-Culture Convention,” and takes place at the Sheraton Downtown Phoenix from Friday, September 1, to Monday, September 4. Programming includes panels like Cosplay Closet, Advanced Cosplay Makeup Techniques, and Anime Jeopardy!, and there's a J-fashion show and a masquerade. Costs range from $15 for Monday Membership to $350 for an Otaku Pass. For more information, see the Saboten Con website.

Creative Residency Artist Christopher Jagmin at the Scottsdale Livery.
Photo by Scottsdale Public Art
The History Project with the Museum of Walking
An evening of walking through Scottsdale might sound like a typical one. But what if you also logged your discoveries during a self-guided tour of Old Town? That's what happens during the History Project with the Museum of Walking put on by walking-enthusiast Christopher Jagmin and Scottsdale Public Art, as part of the MoW's Artist Curated Walking Series. Meet at the Noriega Livery Stable and take your tour from 5 to 7:30 p.m. on Thursday, September 14. For more, visit the event's web page. 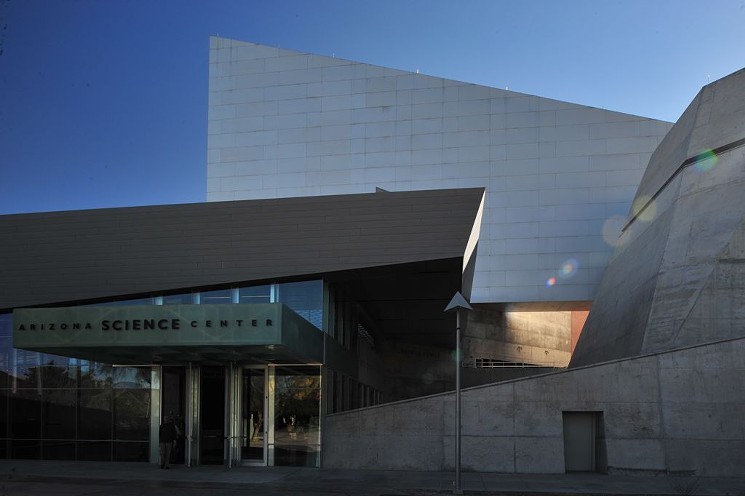 Crows and halo above Rongbuk Monastery near Mt. Everest base camp. May 2007. © Marissa Roth.
Marissa Roth
"Infinite Light: A Photographic Meditation on Tibet"
Photojournalist Marissa Roth went on a journey through Tibet in 2007 and 2010, photographing both trips using Kodachrome film. The resulting images comprise the “Infinite Light: A Photographic Meditation on Tibet ” exhibition in the Asian Gallery at Phoenix Art Museum. The exhibition starts on Saturday, September 23. Entry is free during voluntary donation times from 3 to 9 p.m. on Wednesday, 6 to 10 p.m. on First Friday, and second Saturday and Sunday. For more information, see the PAM website.

Bruce Campbell in Ash Vs Evil Dead. And he's coming to Phoenix.
Renaissance Pictures
Bruce Campbell
Sorry to make you wait this long to learn about actor, director, writer, producer, and overall icon Bruce Campbell coming to the Valley – specifically Dobson High School in Mesa. Changing Hands Bookstore and Phoenix Comicon present Campbell and his author talk on If Chins Could Kill sequel Hail to the Chin, and his hosting of the pop-culture game show, Last Fan Standing. Tickets range from $12 to $66, and the event starts at 7 p.m. on Wednesday, September 27. Find more information at the Changing Hands website.