A Phoenix Trailer That Brings the Barbershop to You 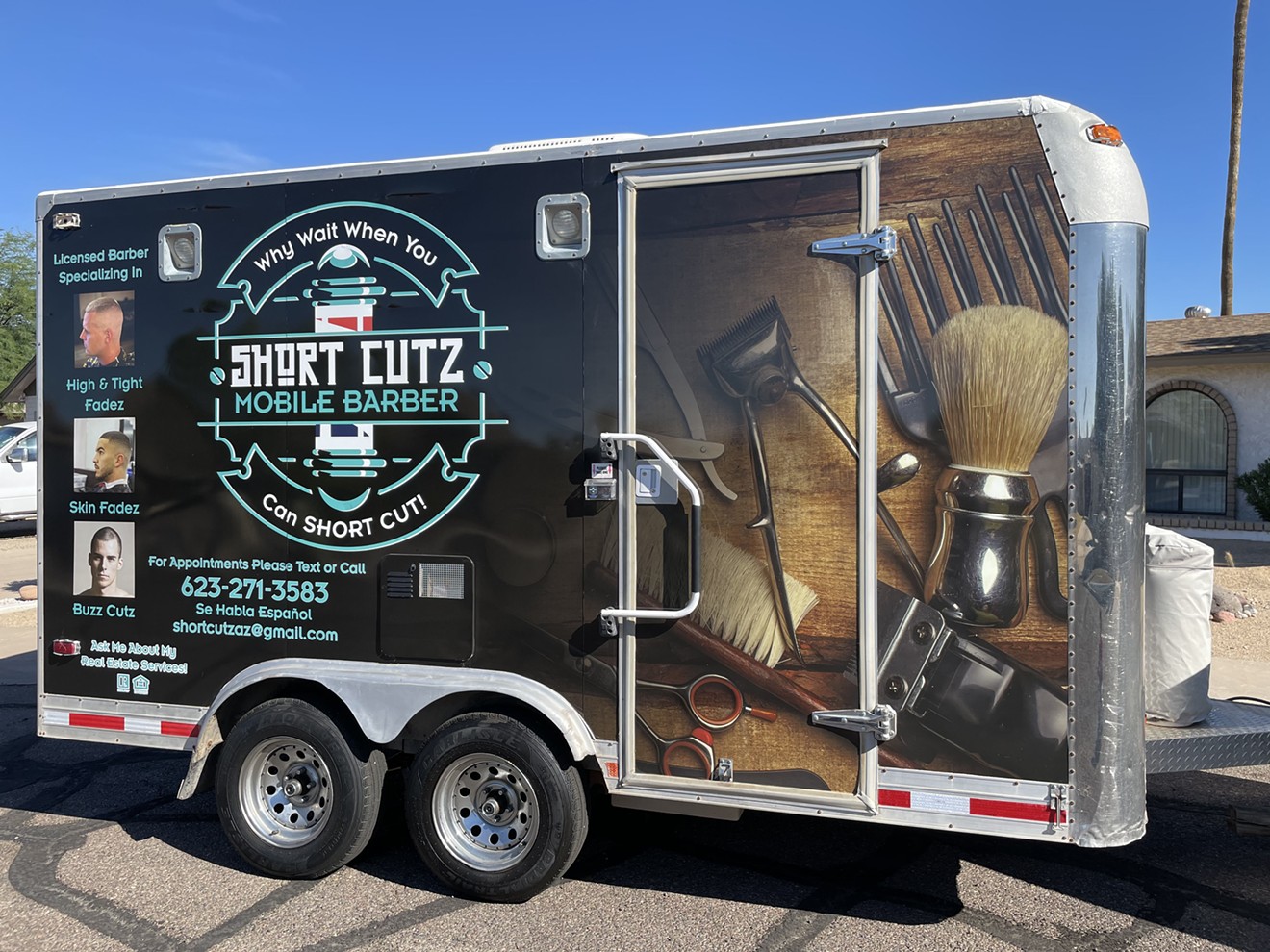 “There was this guy who wanted a business cut,” he recalled. “He wanted me to cut off a perm he had, and he wanted his beard done. And then when I was finished, he was like, ‘You made me look like a thug. I’m not gonna pay.’ I told him just to go, and he got mad and dialed 911 and told them, ‘This guy didn’t cut my hair right!’”

When the police arrived, they told Gonzalez’s client he needed to pay his barber. “All of a sudden he was late for work and had to go,” Gonzalez said, laughing. “You can’t make this stuff up.”

Gonzalez wasn’t always a barber, mobile or otherwise. “I did the call center thing after high school, for years. So long, I kind of dreaded going to work.” He shook his head. “Call centers, man.”

He attended a trade school for auto body repair and dabbled in car fix-ups, but didn’t like the pay scale. He tried market research and worked in the enrollment office at University of Phoenix.

“I got burnt out, man,” he explained. “I was tired of people yelling at me over the phone all the time.”
click to enlarge 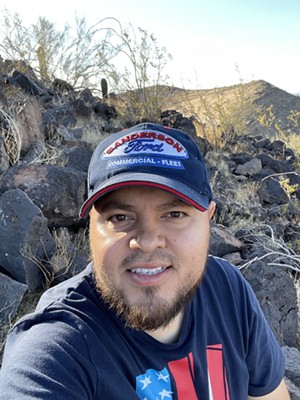 
His mother suggested cosmetology. “She was all into entrepreneurship,” Gonzalez said. “She gave me $300 to go to barber school.”

Gonzalez wrapped up an associate degree in business before enrolling in a local barbering college. “Baby steps,” he said. “I got my 1,500 hours of haircutting in and started part-time barbering. But then I liked cutting hair so much, I went all in. If you don’t risk it, there ain’t no biscuit.”

He started out giving fades and shaving faces at a shop in Peoria. “We were behind a Circle K and kind of hard to find,” he said. “I did that for a year or so.”

Tired of paying commissions, Gonzalez borrowed money from his parents and opened a shop in Sunnyslope. It was hard to keep reliable barbers; the solid ones moved out of state or on to other shops that promised bigger things.

Gonzalez took another job at a nonprofit for disabled adults to keep his barbershop afloat. During his two-week paid vacation from the nonprofit, he took a crash course in real estate and got his license. “The barbering thing wasn’t working right then, so I figured I’d get into commercial real estate and barber on the weekends. But it was too much time away from my kids, man.”

He closed his barbershop and bought a used trailer. “It was a mobile substance abuse testing trailer,” he said. “It was in decent shape, and it had a toilet in there. I put in AC and a little TV, new flooring, and some mirrors. I bought a Dodge Ram to pull it and then I got the trailer wrapped in one of them big banner things with the name of my shop on it. That wasn’t cheap, man. It’s basically a big sticker for $3,000. But that’s how people see you in traffic and know you’re a mobile barber.”

He named his mobile barbershop Short Cutz, he said, because it’s what he liked to do. “That’s my passion, short fade cuts. I don’t like doing long hair or texturized hair, that’s a salon thing.”

His clientele includes men of all ages — 20-year-olds who want to maintain a fade, bedridden Sun City residents living in group homes. He thought a mobile barbershop was a good idea because customers didn’t have to wait around. “You make an appointment, and you don’t have to stand in line. A lot of shops, you wait three hours on a Saturday.”

Mobile barbering was different, Gonzalez said. “In a barbershop, you have a group camaraderie, where you hang out with people and get away from the wife and kids, like a little party.”

What he offered was more intimate. Mobile barbering allowed him to go deeper with people who sat in his chair, because there was no one else around to overhear them. “I’ve had guys break down crying,” he said. “People trying to quit alcohol or they’re getting out of jail and trying to get back on their feet, and I give them that speech that keeps them going.”

And because he’s kept his real estate license active, Gonzalez could offer clients something more than just a good fade. “If they need to buy a house,” he said cheerfully, “I can hook them up with that, too.”
KEEP PHOENIX NEW TIMES FREE... Since we started Phoenix New Times, it has been defined as the free, independent voice of Phoenix, and we'd like to keep it that way. With local media under siege, it's more important than ever for us to rally support behind funding our local journalism. You can help by participating in our "I Support" program, allowing us to keep offering readers access to our incisive coverage of local news, food and culture with no paywalls.
Make a one-time donation today for as little as $1.