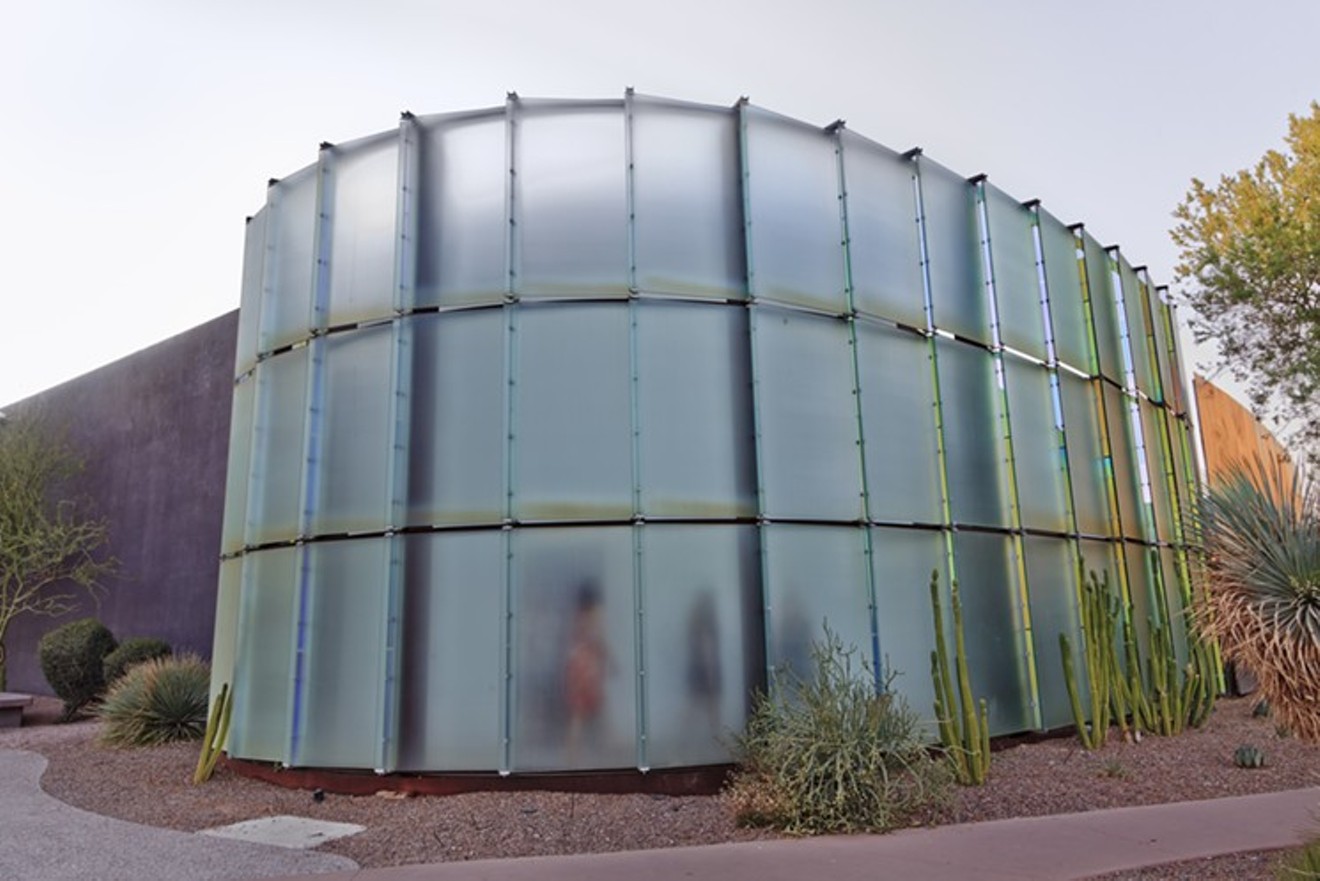 Scottsdale Museum of Contemporary Art is taking a break after December 21. Sean Deckert
Here's what's new, or changing, on the metro Phoenix arts scene this week.

Scottsdale Museum of Contemporary Art will be closed to the public from December 21, 2020 to February 19, 2021. The museum cites the holiday season and preparations for a new set of exhibitions as the reason for the temporary closure.

Before there was a play area, there was this rendering.
Hargreaves Associates

The 20,000-square-foot play area called PLAY officially opened with a ribbon cutting ceremony on Tuesday, December 15. The formal name for the space is Fiesta Bowl PLAY at Hance Park, reflecting the fact that Fiesta Bowl Charities donated $2 million for the project, which is part of the first phase in a multiyear renovation being undertaken by the Hance Park Partner Coalition.

Wasted Ink Is Leaving The Hive

Charissa Lucille announced on Monday, December 14, that she is closing her storefront at The Hive, citing issues with the new owner. She’ll continue to operate Wasted Ink Zine Distro online, and says she’ll consider looking for another physical location once COVID-19 conditions improve.

The Sedona International Film Festival is changing its 2021 dates from February 20 through 28 to June 12 through 20 based on COVID-19 uncertainties and “anticipation of vaccine availability.” The 2021 festival will include new offerings, including outdoor and virtual screenings. For the first time, the festival will include a screenwriting competition.

Phoenix Art Museum will open a new exhibition January 2, 2021, which will feature prints by several renowned artists, including Mary Cassatt, Paul Cézanne, Paul Klee, Edvard Munch, Louise Nevelson, and Robert Rauschenberg. The show’s title is “Out of Print: Innovations of 19th- and 20th-Century Printmaking,” and it will feature works from the museum’s collection and the United Kingdom-based Schorr collection.

True North Studio, a real estate development company headed by Jonathon Vento, recently announced a new concept for the historical Pemberton House located on Second Street north of Roosevelt Street in Roosevelt Row. The Pemberton PHX will include several arts and culinary components done in conjunction with more than a dozen partners, such as FilmBar and Artlink, starting in January 2021. Specific details have not been announced.

Check out the fresh Trumpocalypse design on Grand Avenue during the recent installation.
Lynn Trimble

The Trumpocalypse billboard first installed in March 2017 has a new design by California-based artist Karen Fiorito. New artwork installed on December 17 features a central image of Donald Trump behind prison bars, wearing a jumpsuit and a “Don The Con” name tag. The billboard will be up through the end of January.

Xico Inc. has three new board members, including Jacob Moore, Maria Elena Coronado-Sutter, and Robert Booker. Moore is an associate vice president in ASU’s tribal relations office, Sutter works in grants administration and strategic development for a small business division at Chicanos Por La Causa, and Robert Booker is a former head of Arizona Commission on the Arts. Xico is working to open its new Roosevelt Row location in 2021. The date has not been announced.

Every year, state agencies submit their annual budget requests to the governor’s office as part of the state’s budget process. Arizona Commission on the Arts, the state agency charged with making the arts accessible for all community members, has requested $5 million for the arts in the state’s fiscal year 2022 budget, which covers the period between July 1, 2021 and June 30, 2022. The amount agencies receive will depend on the final budget approved by the state legislature and signed into law by the governor next year.

Throwback to a prior hoop dance competition at the Heard Museum.
Patrick Thomas Bryant

The Heard Museum is transitioning its annual hoop dance contest to a virtual format for 2021 due to the COVID-19 pandemic, citing the devastating toll the pandemic has taken on American Indian and First Nations communities. The Heard Museum Virtual Hoop Dance Contest will be presented on February, 13, 2021, as a prerecorded online event. The deadline to register to compete is January 11, and videos must be received by January 18.

The nonprofit Phoenix Institute of Contemporary Art founded in 2009 has launched a Trajectory Print Project in collaboration with artist Brent Bond and Santo Press. The project is designed to “showcase the richness and diversity” of artworks created in Maricopa County. Initial offerings will include a 12-print portfolio featuring works by artists including Rigo Flores, Shachi Kale, Christy Puetz, and Papay Solomon — plus a series of online exhibitions starting in 2021.

Vision Gallery in Chandler is offering free online art workshops for youth ages 6 to 16 from January to June 2021. Workshops happen on Saturdays at 10 a.m. and 1 p.m. Topics will include book-making, fiber arts, painting, sculpting, painting, and more. Workshop size is limited to 35 students. Registration opens on January 9, 2021.
KEEP PHOENIX NEW TIMES FREE... Since we started Phoenix New Times, it has been defined as the free, independent voice of Phoenix, and we'd like to keep it that way. With local media under siege, it's more important than ever for us to rally support behind funding our local journalism. You can help by participating in our "I Support" program, allowing us to keep offering readers access to our incisive coverage of local news, food and culture with no paywalls.
Make a one-time donation today for as little as $1.