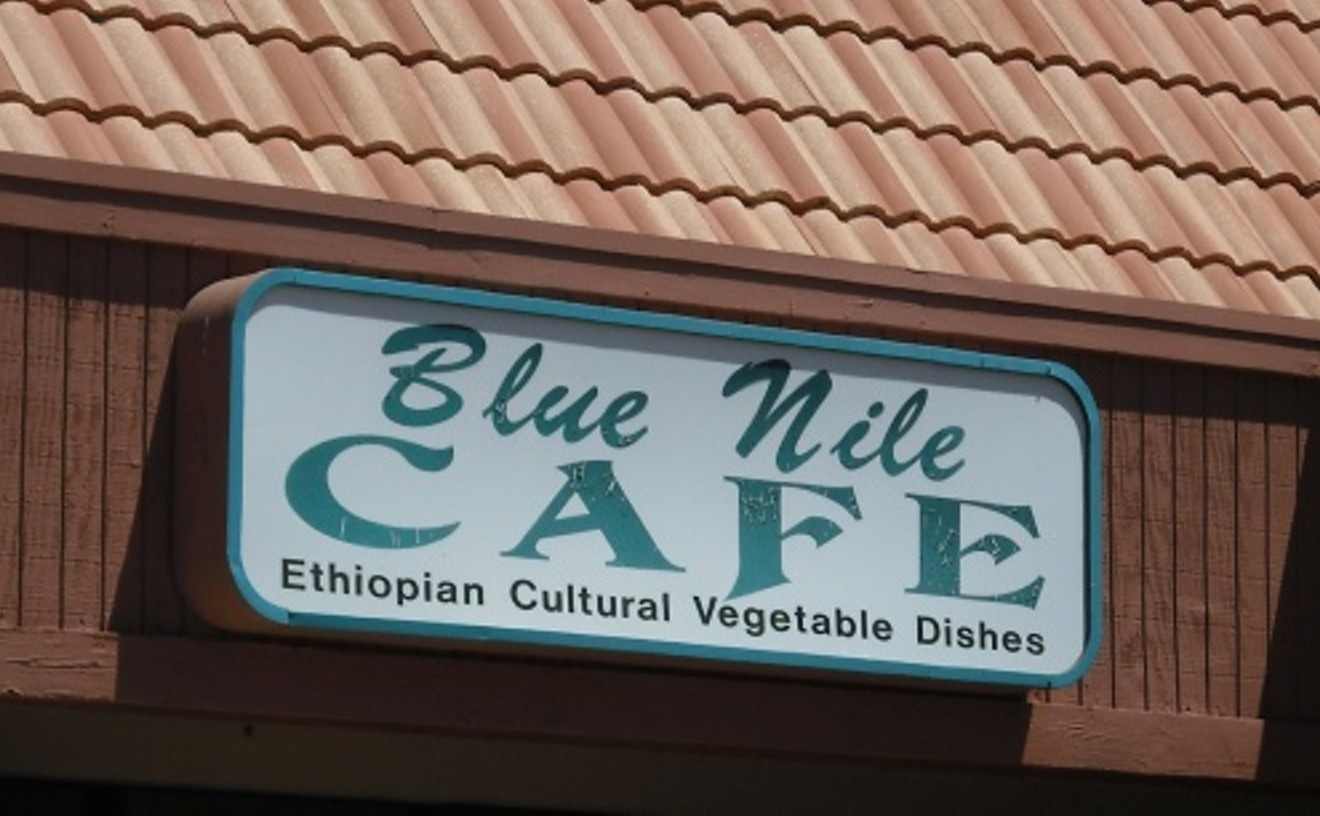 Flavorful, filling, and amazingly affordable cuisine makes for a winning combination at Blue Nile Café. Vegans and carnivores can happily coexist while using moist, tangy injera (a spongy flatbread) in lieu of utensils to scoop up the menu's delectable offerings. We recommend taking in the experience while dining around the colorful woven basket tables called mesobs. There's a multitude of appetizers to choose from, such as the tasty fried samossas (vegetable- or meat-filled fried dough) and vegan Red Sea hummus. After restraining ourselves from licking the hummus bowl clean, we were more than happy to devour our meal of doro wat (tender chicken cooked in a thick, hot berbere sauce) and Blue Nile tebbs (lean beef expertly sautéed in a mixture of onion, green chili, butter, and herbs). The vegetarian dishes are equally alluring, with bean and vegetable dishes infused with aromatic sauces. Be sure to save room for a delicious dessert such as the vegan orange coffee cake and (in true Ethiopian tradition) a drink from the full service espresso bar. 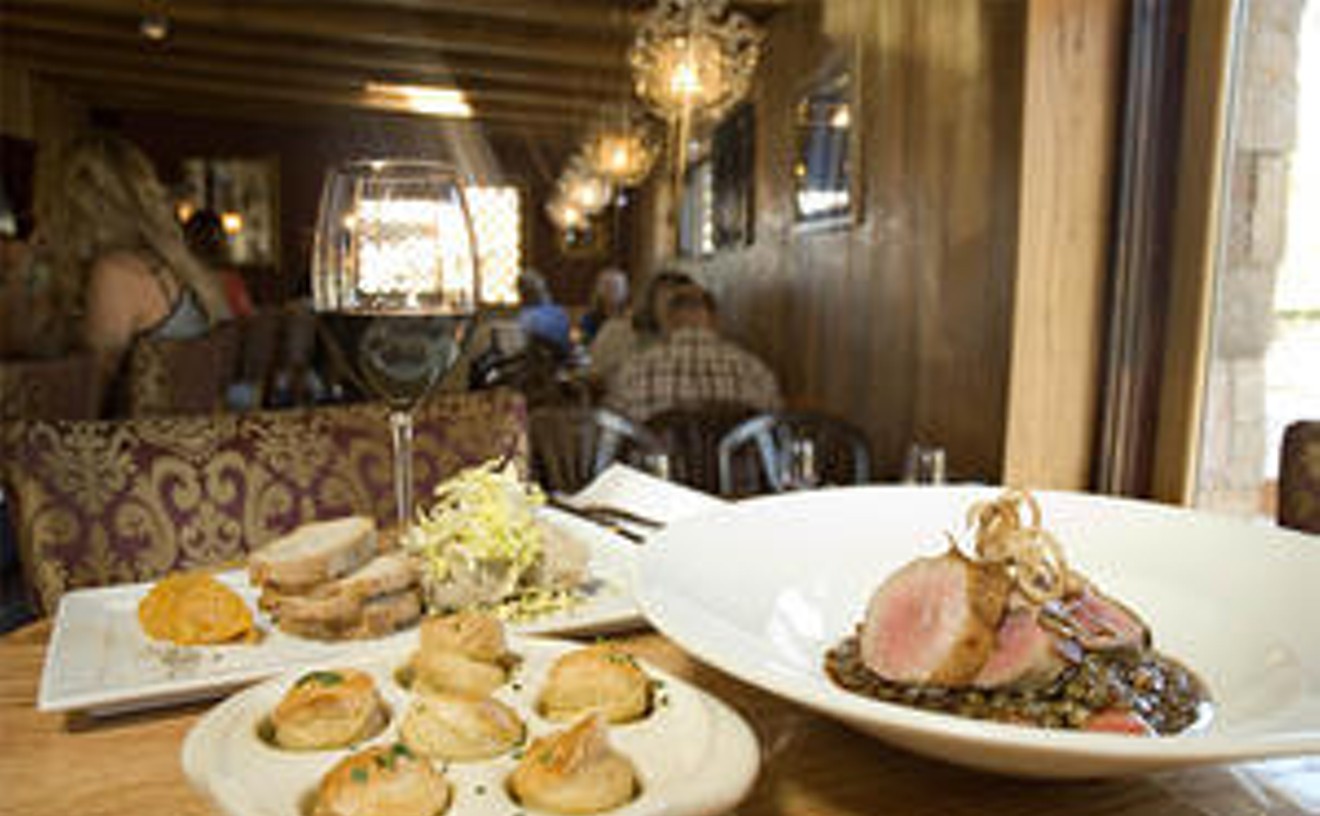 The decadence of French food is unrivaled, but at Petite Maison, they take that real-butter, full-fat approach to gourmet dining. The garden bistro atmosphere is perfect for a romantic night out, and the menu also is dressed to impress. Classic escargot and foie gras share menu space with delicate salads, velvety soups, and rich custards. If it's your first time, you may want to opt for the Staff Meal. Late nights on Thursday through Saturday, the chefs whip up an impromptu menu of their favorite dishes at a discounted price. Whatever you do, don't neglect to end with something sweet!

Jennifer Goldberg
Spaetzle and schnitzel and sauerbraten! When we're craving sauerkraut and sausages galore, we head to Haus Murphy to satisfy our craving for German food. We recommend the Jager Schnitzel, a tender breaded pork loin that is pan-fried to a golden brown and topped with a luscious brown gravy packed with mushrooms. (The gravy is equally good on the spaetzle.) And whatever you do, save room for dessert. The strudels are fruit-packed pastry perfection, and the German chocolate cake always satisfies, but it's the sauerkraut cake that has us coming back again for seconds. Check Haus Murphy out on Saturdays for the in-house accordion and tuba players. 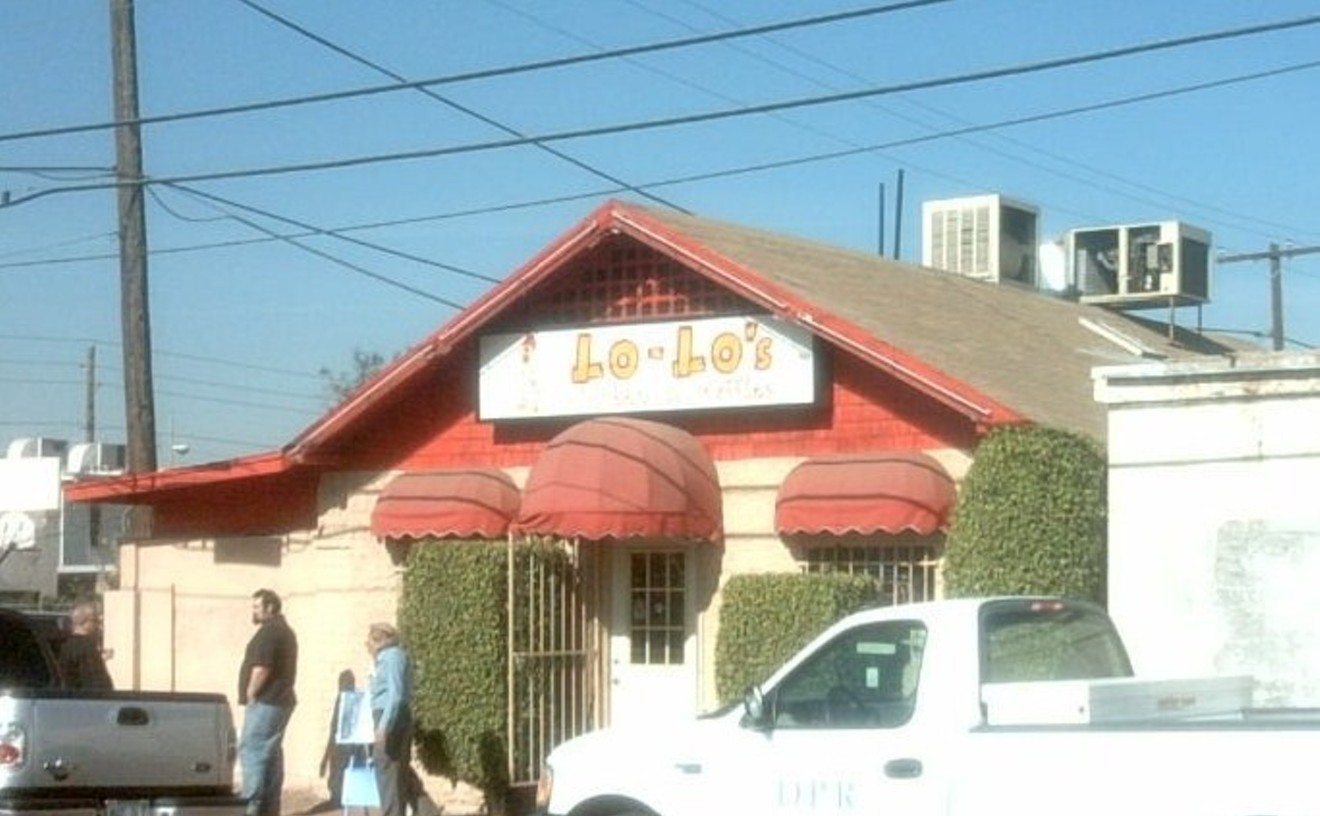 Granted, this isn't exactly front-page news, but the word is out: Lo-Lo's is one of the must-try restaurants in Phoenix. Neighborhood peeps, tourists, fans of the novel, hangover-nursing hipsters, and, really, just about anybody who understands this concept: fried chicken + waffles = Heaven on Earth. We'll be the first to admit that, years ago, when we first heard of this joint, it seemed an odd combo. Once you try it, though, it instantly becomes as obvious as peanut butter and jelly, Oreos and milk, or biscuits and gravy. Syrup, hot sauce, butter . . . it's all part of the equation. Wash it down with a glass or three of red Kool-Aid, and hasten the onset of your Sunday afternoon food coma with a slice of Lo-Lo's transcendent red velvet cake — and you'll know why Phoenicians have begun calling this place an institution.

If you're looking for Texas barbecue — and nothin' but Texas barbecue — in Phoenix, then Texas BBQ House in South Phoenix is your new favorite 'cue. Armed with family rub recipes, owner (and Texan) Mike Pitt is all about the meat — brisket, barbecued chicken, pork ribs, pork loin, chopped beef, sausage, and turkey — cooked low and slow, smoked over oak wood, and sold deli-style. Dinnerware? Only if it's Texas 'cue style. Your "plate" is a scrap of butcher paper, your "tray" a shallow plastic Pepsi crate — and your "utensils"? Unless we're talking about eating a side dish or dessert, they're hands. Start with the heavenly brisket, then move on to plump and peppery sausages, a sinfully good sandwich of chopped beef, and turkey breast that, thanks to a rosemary rub, tastes like Thanksgiving Day. Stellar sides include mustard-y potato salad, Texas creamed corn with sweet kernels bathed in butter and cream, and pinto beans that taste like the veggie version of the 'cue. Pitt's homemade sauce, if you need it (you probably won't), is on the tables. And make sure to bring the green — this cash-only 'cue joint keeps costs down that way.

When you walk into DeFalco's, you see it and you smell it. We're talking about the love that goes into the homemade hot and cold sandwiches, pasta, and pizza at this mom-and-pop Italian grocery-slash-deli-slash-restaurant. The DeFalcos immigrated to North America from Abruzzi, Italy, in 1903 and passed down generations of recipes for their awesome meatballs and tangy tomato sauce. There's no table service here, but that gives you an opportunity to gaze at the racks of imported Italian goodies as you stand in line (and, at lunch, there certainly is a line). And you'll surely enjoy looking at the deli counter, filled with amazing-looking cheeses, cured meats, and side dishes. When it's time to order off the extensive menu, we like to let the folks behind the counter steer us toward what's good, which might be a mouthwatering meatball sub one day or, as one DeFalco told us, "the best cheesesteak anywhere" the next day. Rest assured, we're already plotting our next visit to DeFalco's, because we have a hunch just about everything on that menu is going to make us happy eaters.

We might have trouble finding a good Jewish deli in these parts (hence the absence of the category in this year's Best of Phoenix) but we have no trouble choosing our favorite Italian deli — Romanelli's, the family-owned Italian deli, grocery, and novelty purveyor that's been on Phoenix's northwest side for more than 25 years. Tearing your eyes away from cases packed with salami, pepperoni, and other classic meats and cheeses and chafing dishes filled with steaming homemade sausages, chicken Parmesan, and spaghetti and meatballs means tackling the menu of over 20 hot, cold, and specialty-style subs, in addition to an array of sandwiches, salads, and sides. Not to worry — friendly Romanelli's staff can guide you to a new favorite. On the way out, make sure to stop by the dessert counter for a chocolate chip cannoli and pick up some fresh-baked Italian bread to take home. 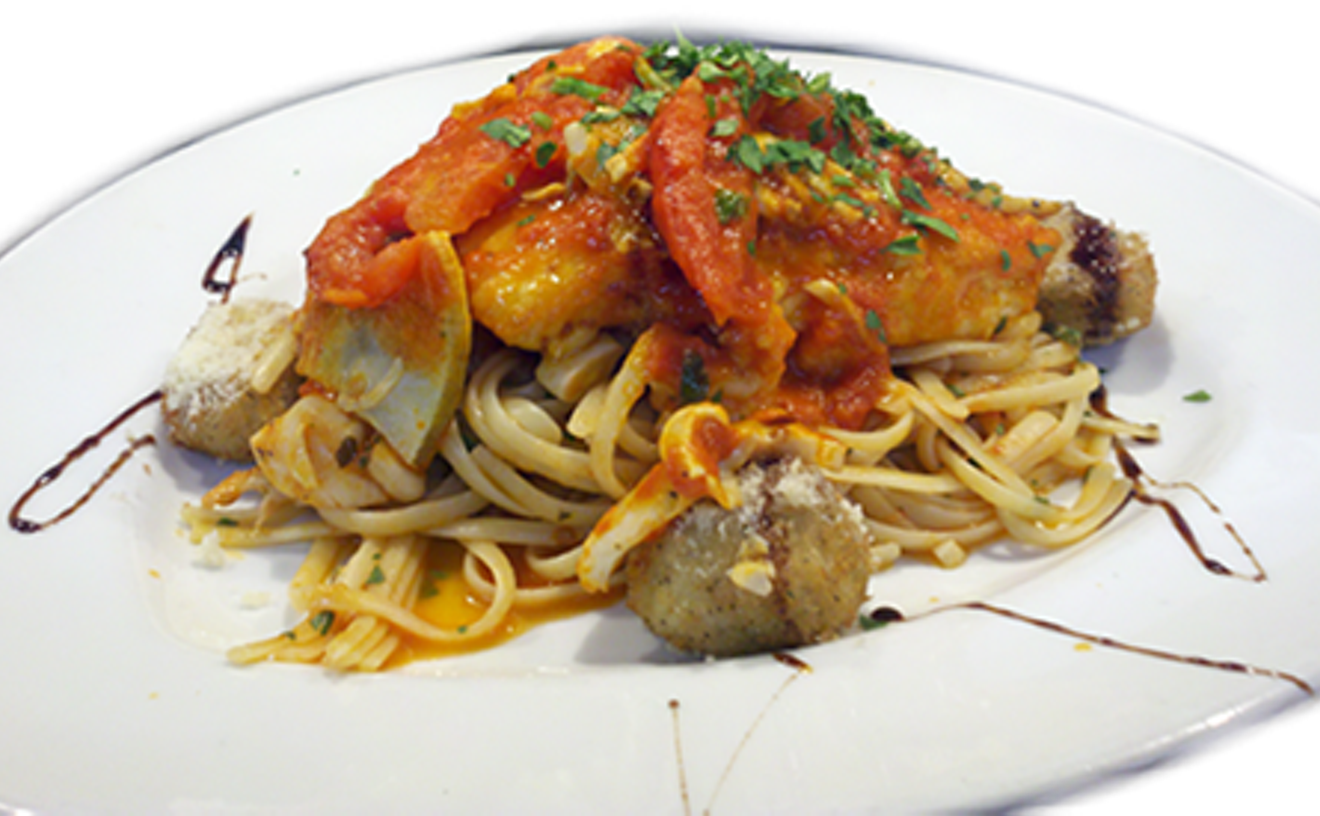 This longtime fixture on the Camelback Corridor does just about everything right: top-notch service by a seasoned waitstaff, great wine, comfortable atmosphere that's classy but not over-the-top decadent, and, most important, primo Italian food. Start with a beautifully displayed antipasto or the wonderful Caprese appetizer before moving on to one of Tomaso's house-made pasta dishes or finely prepared meat and seafood entrées. Our favorite, the Pasta Trio (featuring porcini ravioli, spinach ricotta truffle ravioli, and gnocchi) is a stunning creation that will have everyone at your table ogling your plate with envy. That is, if they can keep their eyes off the Tuscan mixed grill (featuring a bursting-with-flavor house-made sausage, juicy petite filet mignon, lamb chop, and a bed of divine truffle risotto). Seafood lovers certainly won't be disappointed with their plate of lemon prawns and the wonderful lobster saffron ravioli. Before you know it, you'll have killed a couple of hours and a bottle or three of vino, and you and your dining companions will be asking each other: "When are we coming back?" Yeah, there's a reason Tomaso's still remains a go-to on this restaurant-heavy stretch of road.

Grandma used to say, "Don't talk with your mouth full." When we're at Il Posto, we're constantly shoving food into our pie holes, because, well, everything they serve there tastes so great. And so, with our faces full of pizza and pasta, we've never gotten around to asking for the ingredients in these and other amazing Italian delicacies served at the former Our Gang diner.

It's just as well. We've been told that the recipes at this North Central Phoenix gem were all handed down from Grandma Brescia, the matriarch of the New York family that founded Il Posto nearly 20 years ago. The Brescia family's quality menu, rustic décor, neighborly feel, and mouthwatering dishes are made all the more appetizing by the warm, friendly patio, a red brick replica of the Manhattan neighborhood where owner Dino Brescia's father grew up.

Sure, a lot of restaurants serve stuffed mushroom caps, but Il Posto's are stuffed with a seasoned mushroom stuffing served in a brandy cream sauce. Brandy cream sauce? That sounds like something Grandma — at least a nice Italian Grandma — might come up with. And spicy corkscrew pasta with Italian sausage, prosciutto, peppers, mushrooms, and onions in a marinara sauce topped with shaved Parmesan — that one hollers "Grandma!" too. In an Italian accent, that is.

Is that red chili we taste in the rigatoni pomodori? Can it be blue cheese in the cream sauce Il Posto ladles over its fluffy, potato-y gnocchi? The Brescias aren't saying. Family recipes are a secret worth keeping, we suppose, especially when they lead to the kind of amazing dishes that come from the secrets that this nice Italian family are keeping.

Heather Hoch
Somewhere along the way, Phoenix became known as a great pizza town (specifically if you're talking about the gourmet stuff), so it's no easy task to pinpoint the best. This year, though, we have to acknowledge what's become one of our faves, The Parlor. The former beauty salon is simply one of the most comfortable and cool places to eat in a region of Phoenix that's full of them. And the cleverly conceived pizzas are uniformly delicious, with their thin, bubbly crusts, locally raised and processed meats, and fresh produce (many of the herbs and spices are grown on the property). But what tips the scales toward The Parlor in this category this year is what keeps us coming back time and again: the eight-inch pizza for $10. A table of four can order four or five of these dandies, giving everybody a chance to sample, sample, sample without breaking the bank. See you at The Parlor.