Basic Elements Show You Can't 'Hide' From the Past 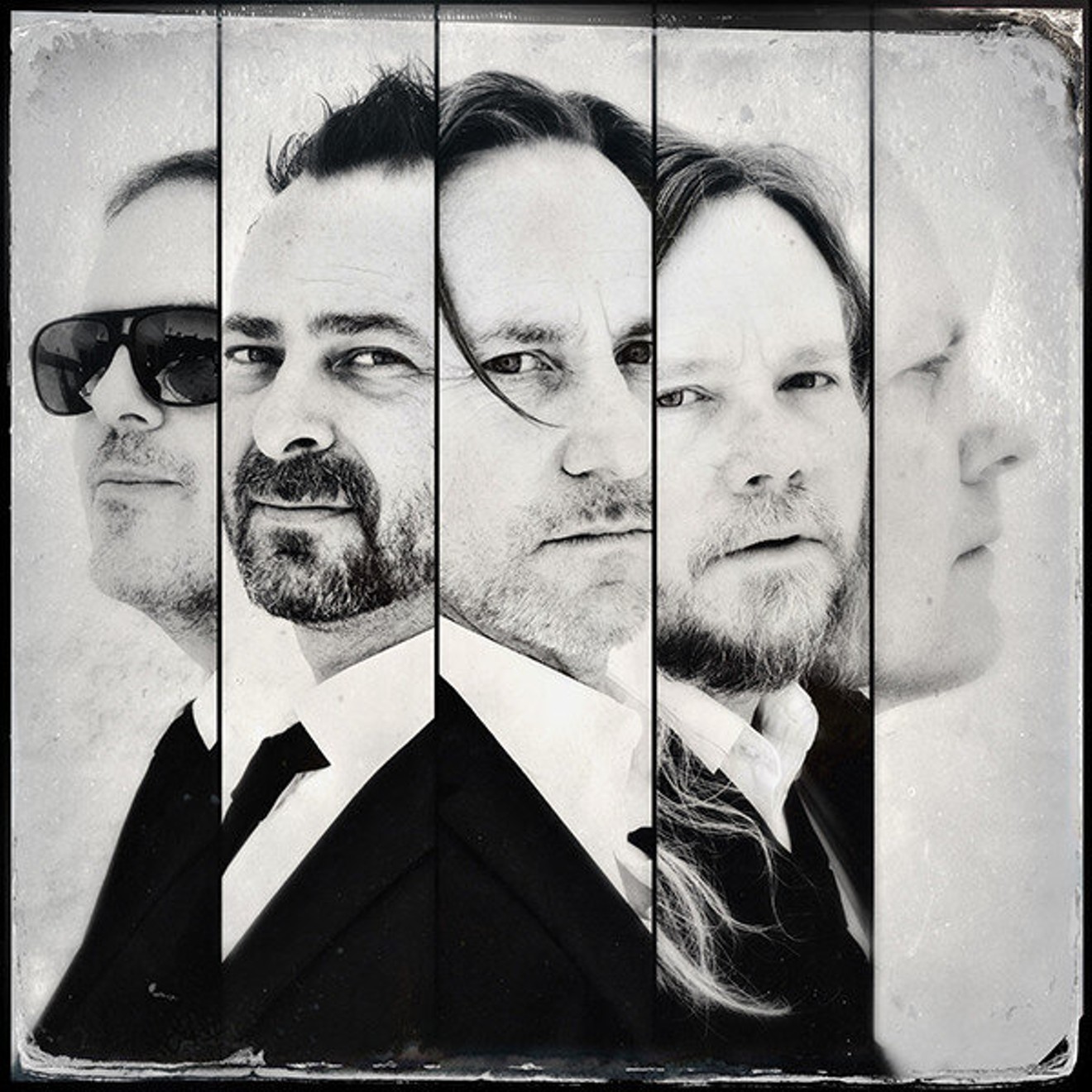 The faces are older, but the songs remain the same. Basic Elements is back. Ashley Noelle Studios

Despite all of the craziness that's currently in control of the world, it's nice to know that there are still opportunities to take charge of things. Sometimes we can even reach back into our past and finish the unfinished.

From 1985 to 1990, the New Wave band Basic Elements played stages all over greater Phoenix, opening for bands like The Bolshoi, Gene Loves Jezebel, and even early incarnations of Gin Blossoms. In those days, the band members were high school students from the Paradise Valley area, and often, they were politely asked to leave the gigs they had just played.

“We were playing in bars with grown-ass adults and alcohol. We were 15, 16, 17 years old," says Jonathan Goldman, who plays synthesizer in the band.  "We would be playing the [Mason] Jar and [owner] Franco [Gagliano] would come and say, ‘You guys gotta go now. We’re going to lose our liquor license.’ So, we would go get high in the back.”

The songs were all part of the Basic Elements (or to those who may not have been the biggest fans back in the day, Spastic Elephants) repertoire during the band’s five-year lifespan.

Goldman and Bowling lived within walking distance of each other as children and formed the band as they were getting out of their Dungeons & Dragons phase, according to Goldman.

“I think it started when MTV came around. My neighborhood was the first to get cable. We lived in Paradise Valley and not every house would get cable, so Jon would come over to my house and watch MTV,” says Bowling, who now lives in the Topanga Canyon area of Los Angeles.

One of the first songs to capture the boys’ attention was “Hungry Like the Wolf” by Duran Duran, which was in heavy rotation in the early days of MTV.

“We started watching Duran Duran (on MTV) when ‘Hungry Like The Wolf’ came out and it was like James Bond meets New Wave. Our minds exploded,” says Goldman before Bowling added, “It had everything we were into.”

The “Hungry Like the Wolf” video shows Duran Duran at various sites in Sri Lanka, with heavy nods to the films Raiders Of The Lost Ark and Apocalypse Now, which were favorites of the band. During our conversation, the band also talk about early influences like Thompson Twins, U2, Simple Minds, and Psychedelic Furs, both musically and in terms of fashion.

“We were going to the ‘gear for guys’ section at Judy’s in Paradise Valley Mall, and wearing our mom’s shoulder pads and eyeliner, asking the girls at London Fog how to do our hair like the Thompson Twins, and in 1984, that meant getting our asses kicked. The lightbulb kind of went off when Bill and I saw Revenge of the Nerds. We were like, ‘Yeah, we should start a band. That’s how we won’t get our asses kicked.’ It was a survival mechanism,” remembers Goldman. 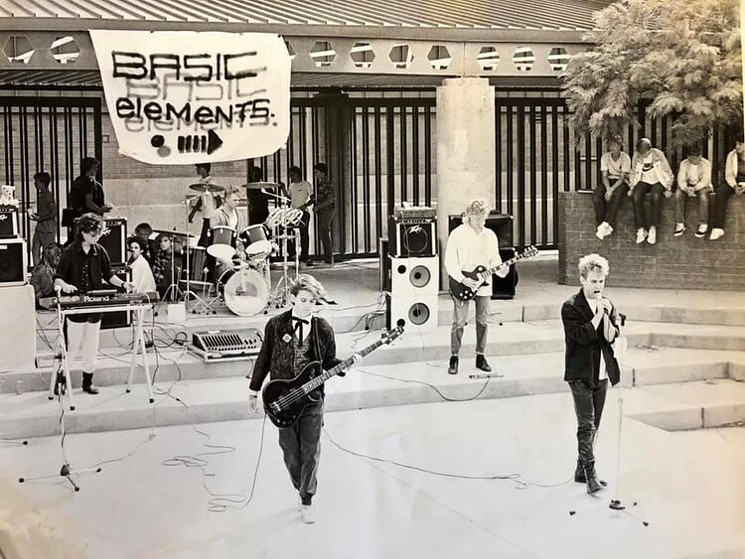 Basic Elements makes an appearance during lunchtime at Horizon High School in 1985.
Paul Faulkner
As it happens, “Hide” was the first original song the band played at their very first gig at the Shadow Mountain High School talent show in 1985.

“We played ‘New Year's Day’ [by U2] to get everyone’s attention, and the second song ... was ‘Hide.’ We were into Frankie Goes to Hollywood’s ‘Two Tribes,’ — the Reagan versus Gorbachev [video] — and ‘Hide’ was a 'hide from your leaders song,' but it also had undertones of hiding from the norm,” Bowling explains.

Denis, a singer and sculptor, shares a story of playing at his alma mater, Horizon High School in Scottsdale, and narrowly escaping the flying fists of nonplussed lunchtime concert-goers who chased the band to their vehicle after their set. Still, he has fond memories of the band’s initial run, especially the song “Hide.”

Whether you'll be hearing “Hide” for the first time on October 2, or for the first time in a long time, you're in for a treat. Recorded expertly by Buller, it doesn't sound dated at all. Fans of Simple Minds will definitely dig it; it has a similar feel to that band’s work on their New Gold Dream record, but it also has an authenticity that current bands inspired by '80s New Wave can only strive for today.

“We were highly influenced by the punk and New Wave thing that was happening in an era when there was not a lot of those things happening. It was fun. Writing that song (“Hide”) was kind of a guttural response to what was going on there. It was about individuality and breaking ground into a new culture. It felt like something was building,” says Denis.

In November  2019, Basic Elements played their first reunion show at the Mint in Los Angeles; a large contingent of Phoenicians were in the audience. They want to play Phoenix in 2021, and if Denis has his way, they'll do a show at Arcosanti as well. (They were hoping to play at The Rebel Lounge earlier this year, but the pandemic put a stop to those plans.)

The timeliness of “Hide” here in 2020 is also something that does not escape the band.

“It is like something I have been working on my entire life,” says Bowling.

“We just want to share it. If people connect to it, we’ll take it wherever it goes. [“Hide”] was our fight song, and it feels like this is our time to fight,” says Goldman.
KEEP PHOENIX NEW TIMES FREE... Since we started Phoenix New Times, it has been defined as the free, independent voice of Phoenix, and we'd like to keep it that way. With local media under siege, it's more important than ever for us to rally support behind funding our local journalism. You can help by participating in our "I Support" program, allowing us to keep offering readers access to our incisive coverage of local news, food and culture with no paywalls.
Make a one-time donation today for as little as $1.