Best of Phoenix 2020: Here Are the Local Music Winners 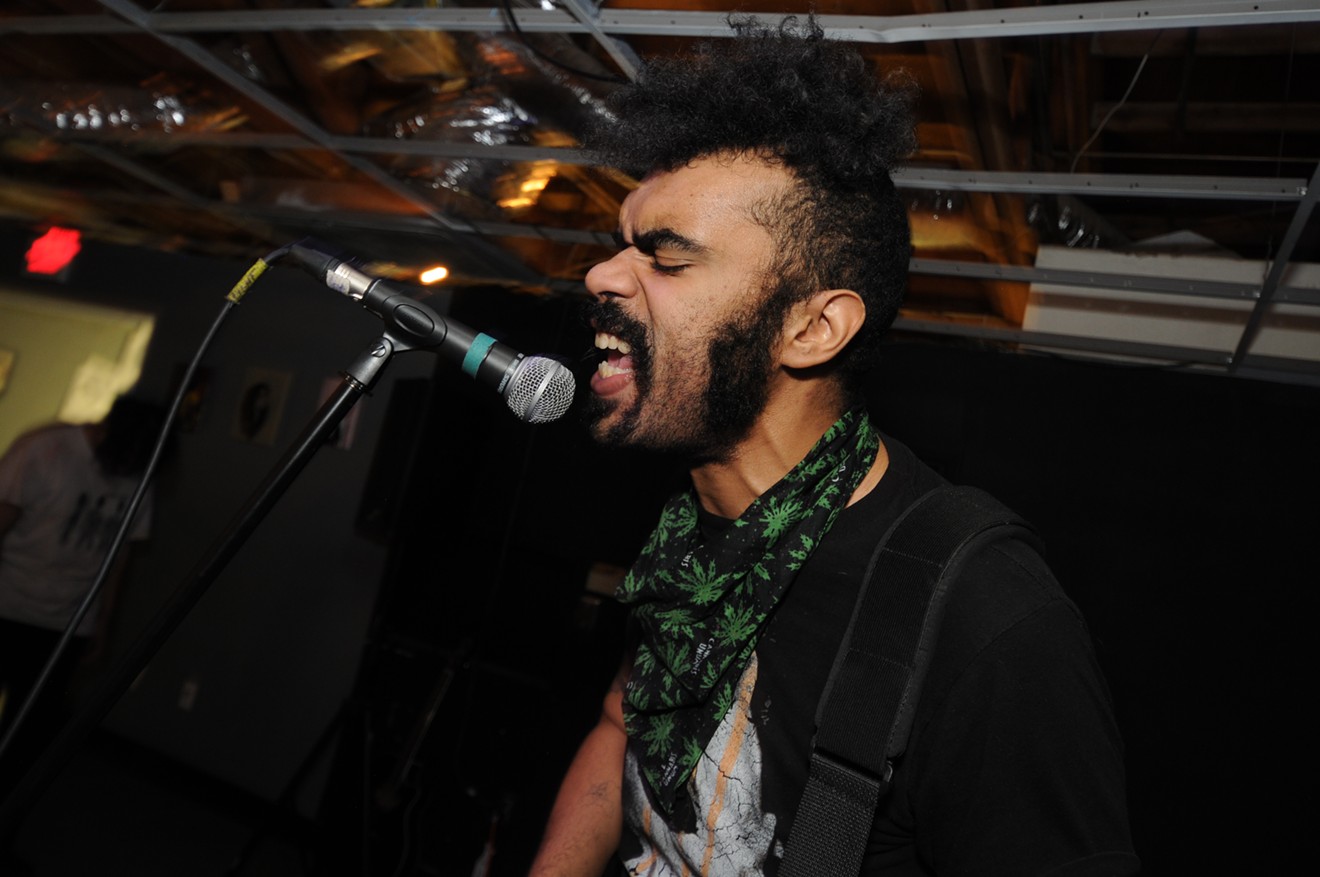 
Even though the COVID-19 pandemic put the kibosh on live performances for most of the year, there's still plenty to celebrate about the metro Phoenix music scene.

Here are some of the winners of the Best of Phoenix 2020 music categories.

We ain't gonna lie: When Justus Samuel first announced the Arizona Hip Hop Festival back in 2014, we thought he was nuts. Or suffering from delusions of grandeur. Or both. Bringing together close to 100 artists (and their egos) from Phoenix's fractured and often-contentious scene for an enormous one-day showcase? It seemed destined to implode under the sheer weight of Samuel's ambition. We were wrong. Save for some logistical snafus, the inaugural festival was a resounding success. Six years later, it's still going strong, helping to develop local talents, foster a sense of community, and put Arizona hip-hop on the map. That's been Samuel's M.O. for more than a decade with his record label and promotions company Respect the Underground, which showcases rappers through regular gigs and lands them airplay on online platforms like iKON Radio. He's even adapted to the COVID-19 crisis, using livestreams and virtual concerts to get RTU's music to the public — whatever it takes for Arizona's hip-hop godfather and biggest booster to continue repping this fine state.

Other rappers might be content with the level of success Raheem Jarbo has achieved — Billboard-charting tracks, nerdcore icon — but not the performer known as Mega Ran, who's never rested on his laurels and never stays idle for long. Jarbo is always leveling up his skills, honing his already considerable lyrical talents through constant projects and collaborations with premier rappers like Young RJ of Slum Village and Kadesh Flow. Game recognize game. He's got geek cred to go with his street cred, continuing to drop tracks laden with gaming and geek references (it's how he first made his name, after all) or hosting virtual concerts in Animal Crossing. Jarbo also uses his status to give something back; in July, he raised nearly $17,000 through Twitch livestreaming for a nationwide bail fund for Black Lives Matter protesters. He's a force on the mic and a force for good.

BIJOU is protecting himself personally and professionally.
SirJhn

After more than a decade of polishing his skills, mostly behind the scenes as a DJ/producer, it's Ben Dorman's time to shine. Over the summer, the artist known as Bijou (French for "jewel") dropped his debut album, Diamond City, and its brilliance proves he's a cut above most locally produced electronic dance music artists. The 15-track effort is a true gem, glittering with radiant bass, hip-hop swagger, and huge infusions of G-house crafted by Dorman, backed up by rap glitterati like Denzel Curry and Wifisfuneral. It's sparkled on SoundCloud so far, with bangers like the Dr. Fresch collaboration "Westside" (featuring bars by Phoenix's Willy Northpole) racking up hundreds of thousands of plays within weeks of release. Such success makes Dorman's decision in 2013 to abandon a potential pitching career a wise one. We're certain the Valley native will be called up to EDM's big leagues soon enough.

Harper and the Moths are this year's best local band.
Jim Louvau

Harper and the Moths

This Is Spinal Tap has been part of the pop culture lexicon for so long, it's become cliche to say that a band can take it up to "11." But with all due respect to Nigel Tufnel's amp, Harper and the Moths went above and beyond after the release of their first full-length album, Dark Enough to Dance, their nod to the funky Nile Rodgers guitar sound of the '80s. No one said they had to produce a choreographed 360-degree video to the single "Your Love" — but they did (and it kicked ass). And they deserve an award for getting local indie kids to stop standing with folded arms and dance at every show. But wait a second, isn't that what we're doing here? We are, and we can't wait to see what's next.

CJ Jacobson of Paper Foxes told Phoenix New Times last year that Popular Confessions, the title of the band's debut album, was a term he coined to "explain the mass depression that nearly everyone seems to be experiencing in 2019." The record made the melancholy melt away more than any other Valley release, which is why we're still listening in 2020, when we're unable to go out and dance with the "death disco" group. And folks outside Arizona are starting to take notice. Paper Foxes was recently named the best unsigned band in the state by Alternative Press. Here's hoping they'll get the chance to show off for the residents of other states soon.

There wasn't much time for live music in 2020 before the world up and changed. Livestreamed shows are a satisfying distraction, but they can't capture the visceral quality — the power, really — of seeing a genuine live concert. Unless, of course, we're talking about Las Calakas. This cumbia fusion band somehow managed to re-create the excitement of their raucous live shows despite the limitations of technology. It's not just that the streams ignited the same fires as an actual concert (an urge to shimmy, the tendency to hoot and holler, etc.) — they displayed the band's dynamic in high-res detail as they whipped out fiery fusion jams in real time. Las Calakas' streams are a reminder of live music's power to help people lose themselves in the creative ether. More than anything, they kept hope alive for what might come next for a post-quarantine world: a night out at the show, dancing and vibing with a few dozen close strangers.

The cowboy mythos may be antiquated, but folks 'round here still blaze plenty of trails. In the last decade or so, Andy Warpigs has cut a swath through this city, shining bright as a folk-punk hero who uplifts listeners with each new trip to the stage or studio. Warpigs champions punk-ish values of individuality and justice, acting as a beacon for an entire community of artists trying to make their own brand of weirdness take flight. What drives his devotion to sound and city alike is a genuine love of music and an earnest belief that great tunes can unite a village, burn out all the evil, and make a place that's more free and fun than previously imagined. Even if such transformations never fully take hold, Warpigs' dedication to Phoenix keeps us all on our toes and perpetually honest with what we're putting in. He's not just some noble figurehead or stoic figure on horseback, and he doesn't demand change so much as show us something in ourselves to work toward. He's the guy with the guitar singing about a dark and twisted world, hoping we'll scream along for just a couple of bars.


Best Transition to a Cover Band

The members of Treasure MammaL have always been tough nuts to crack. As much a band as pure performance art, they blend ironic detachment, bountiful nostalgia, and globs of random pop culture into something indecipherable but nevertheless entirely entertaining. As it turns out, the collective might have another calling as a cover band. Across 2020, they've released bonkers covers of songs by Depeche Mode, Sublime, and the Aquabats. Are these songs "good" in a traditional sense? No. They sound as if your 1998 Dell PC exploded in a fit of mangled musical samples. But they're good in that they're completely insane pieces of media that somehow make our current timeline feel less terrifying and all-consuming. If you're not into it, don't let that stop you from enjoying original Treasure MammaL material (September's Grammy Nominated is totally silly but also transcendent). Instead, let these covers serve as inspiration to, say, leave behind the rat race, move to Las Vegas, and start a covers-centric cabaret show on Fremont Street.
KEEP PHOENIX NEW TIMES FREE... Since we started Phoenix New Times, it has been defined as the free, independent voice of Phoenix, and we'd like to keep it that way. With local media under siege, it's more important than ever for us to rally support behind funding our local journalism. You can help by participating in our "I Support" program, allowing us to keep offering readers access to our incisive coverage of local news, food and culture with no paywalls.
Make a one-time donation today for as little as $1.