About That Die Antwoord Concert Supposedly Coming to Phoenix

Sorry folks, Ninja and Yolandi Visser probably aren't coming to Phoenix anytime soon. Courtesy of Press Here Talent
It was something many Phoenix-area fans of Die Antwoord have been waiting forever to hear.

The infamously bizarre rap-rave act was finally going to perform a show here in Phoenix. And, even better, it would be happening only three months from now.

It's certainly was big news, especially since the South African-born duo of Ninja and Yolandi Visser have never performed in Phoenix.

One problem, though. It wasn't actually happening.

The concert, which was supposedly taking place at the Orpheum Theatre in downtown Phoenix in early July, was part of an April Fools Day prank by a local DJ.

Here's how it went down: In the early morning hours of Sunday, April 1, Emile Ananian (who, as DJ Emile, was one-third of the legendary Bombshelter DJs) began posting a promotional image for the alleged show on social media, including the Orpheum Theatre's Facebook page. 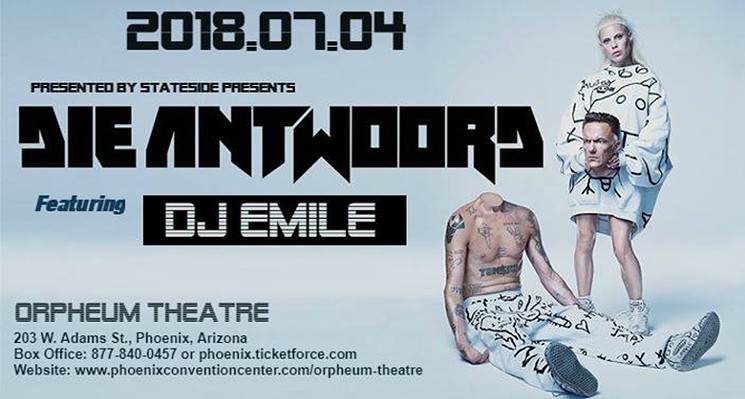 The promotional image touting a supposed Die Antwoord show in Phoenix.
Emile Ananian's Facebook
Among other things, the advertisement claimed the show was being promoted by Stateside Presents and would feature Ananian as an opening act.

The image got some attention over the next few hours, including a several shares, and caused a few folks to hit up Orpheum's website for tickets, only to find nothing listed.

Phoenix New Times reached out to Stateside Presents, which confirmed that the supposed show wasn't happening. By Sunday afternoon, Ananian more or less admitted it was part of an annual April Fools Day joke on his Facebook page.

Sorry, Die Antwoord fans of the Valley. You'll just have to keep waiting.

Ananian wasn't the only member of the local music scene pulling a funny on April Fools Day, as local electronic dance music promoter Relentless Beats got into the spirit of things with a prank of its own.

On Sunday, the company claimed on its Facebook page and website that rapper Travis Scott was bowing out of his much-anticipated headlining gig at its Phoenix Lights festival this weekend.


According to the post, which was very tongue-in-cheek, his girlfriend and baby mama Kylie Jenner would be taking over the spot while Scott babysat their newborn daughter, Stormi.

“It came as a surprise to everyone (okay, not really) when they made the official announcement,” the post stated. “Even more surprising though, was the news that Travis Scott wouldn’t be able to attend Phoenix Lights this weekend – he’s on Storm(i) watch!”

Relentless Beats' prank (which even included a Rick Roll) managed to fool a bit more people than Ananian's stunt, including racking up more than 100 comments and 25 Facebook shares.

In reality, Scott is still expect to headline the second day of Phoenix Lights – which takes place on Saturday, April 7, and Sunday, April 8, at The Park at Wild Horse Pass in Chandler – and is arguably one of the most anticipated performances of the festival.

And that's no joke.