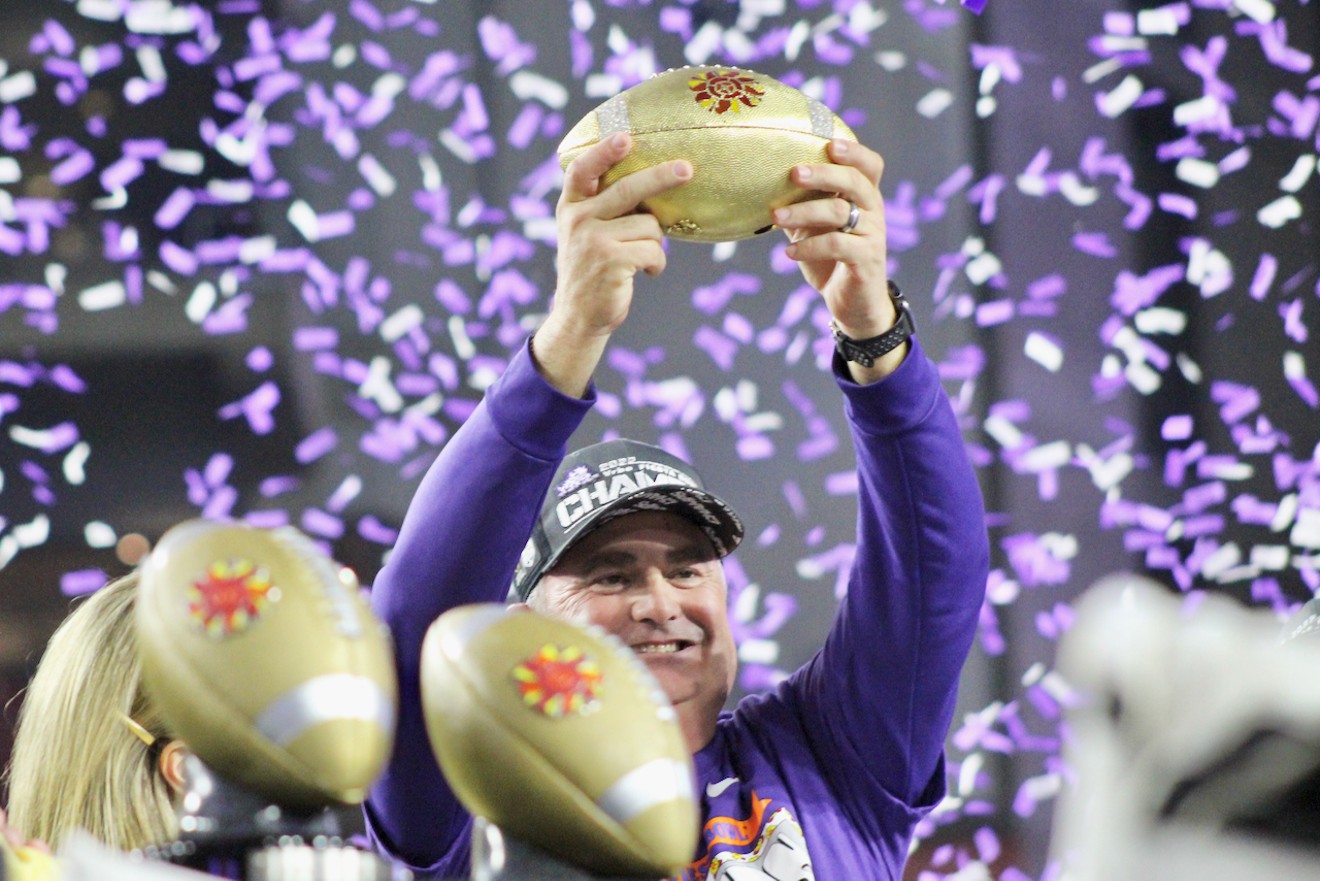 TCU head coach Sonny Dikes celebrates after the Horned Frogs won the Fiesta Bowl on December 31. Elias Weiss
The noise was deafening at State Farm Stadium on Saturday night. It was a blend of ecstasy and incredulity, with hands lifted in praise and tears of despair drowned by an interminable chant: T-C-U! T-C-U! T-C-U!

Before the giant taco dropped on New Year’s Eve — it’s an Arizona tradition — fans from across the country gathered in Glendale for just the third College Football Playoff contest to take place at the Fiesta Bowl. The bowl game itself has been an annual tradition in the Valley since 1968.

Even before kickoff, pennants commemorating the Arizona Cardinals’ bygone heyday rippled from the rafters as 71,723 fans sounded off ear-popping cheers of “Go Big Blue!” and “Riff, Ram, Bah, Zoo!”

This postseason bout between the second-ranked University of Michigan Wolverines and the third-ranked Horned Frogs of Texas Christian University far exceeded its hype as a preview to Super Bowl LVII, which will be played for the fourth time in Glendale on February 12. The high-scoring affair turned from a blowout to a shootout and ended with TCU and its psychedelic meme mascot notching the biggest upset win in college football playoff history. The game smashed no less than 10 college football records along the way.

Glendale Mayor Jerry Weiers recalled “some wonderful, wonderful games” at the Fiesta Bowl during his time in office, but even he couldn’t have predicted the jaw-dropping moments that ensued. “Glendale, Arizona, is so proud to host this game again,” he said during a press conference on December 30.

All the while, players, coaches, and fans enjoyed all the Valley has to offer and marveled at our balmy desert weather and beaucoup attractions.

The TCU mascot with a flex at the Fiesta Bowl.
Elias Weiss

“We're excited to be here in Phoenix,” TCU head coach Sonny Dikes told reporters at a December 24 press conference. “The weather sure is beautiful.” It was 25 degrees in Fort Worth, Texas that morning when the team left for the Valley.

“It's pretty dang cold back home, so it felt pretty refreshing getting off the plane,” offensive lineman Wes Harris added. “It's 65 and sunny out here.”

During their week in the Valley, TCU players ate dinner at Fogo de Chão in Scottsdale, enjoyed a game of Topgolf in Glendale, and watched the Arizona Cardinals game on Christmas Day — a possible hint of things to come as the Cardinals could select TCU wide receiver Quentin Johnston with its top 10 draft pick this spring.

Players from both playoff teams built beds for children in need with the Phoenix volunteer group, Sleep in Heavenly Peace. 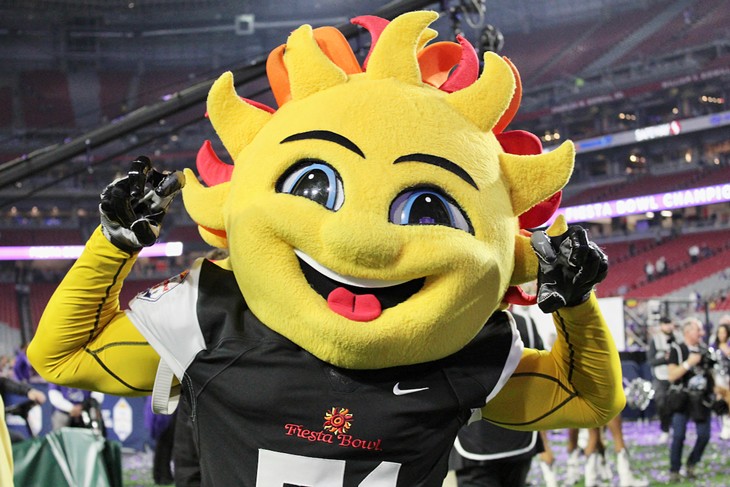 History Made Again and Again in Glendale

Before the 2020 college football season started, doctors diagnosed TCU quarterback Max Duggan with Wolff-Parkinson-White syndrome, which is a condition that causes the heart to beat abnormally fast. He underwent a nine-hour heart operation.

During the 2021 season, the school parted with its winningest coach ever, Gary Patterson, and finished with a losing record of 5-7. This year, the team was projected to finish seventh in the Big 12.

But the team has gone 13-1 and, with a trip to the national championship game in Los Angeles on the line, eked out a six-point win on December 31 in the highest-scoring Fiesta Bowl ever.

Duggan started the season on the bench and ended it as a Heisman Trophy candidate.

TCU’s 51-45 win over Michigan marked the second-most points ever scored in a college football playoff game. The matchup also featured the highest-scoring quarter in college playoff history when the teams combined for 44 points in the third frame.

“They had a business mentality when we got here to Phoenix, and it carried over to the game,” Dikes told reporters after the game.

It was the first-ever battle between the two teams. TCU has the second-lowest enrollment of the nation’s 65 Power Five football programs, making it the smallest school by a wide margin to make the college football playoff.

TCU became the first Big 12 team and the first team in Texas to make the postseason.

The Horned Frogs were also the longest preseason long shot to qualify for the playoff. At 200-1 odds, the Frogs shared the same playoff chances as Iowa State, which finished 4-8, and West Virginia, which finished 5-7.

“This is incredible to win here in Phoenix,” TCU cheerleader Parker Burross told New Times. “There’s nothing like the feeling of pride I have right now. Now we’re in the championship.” 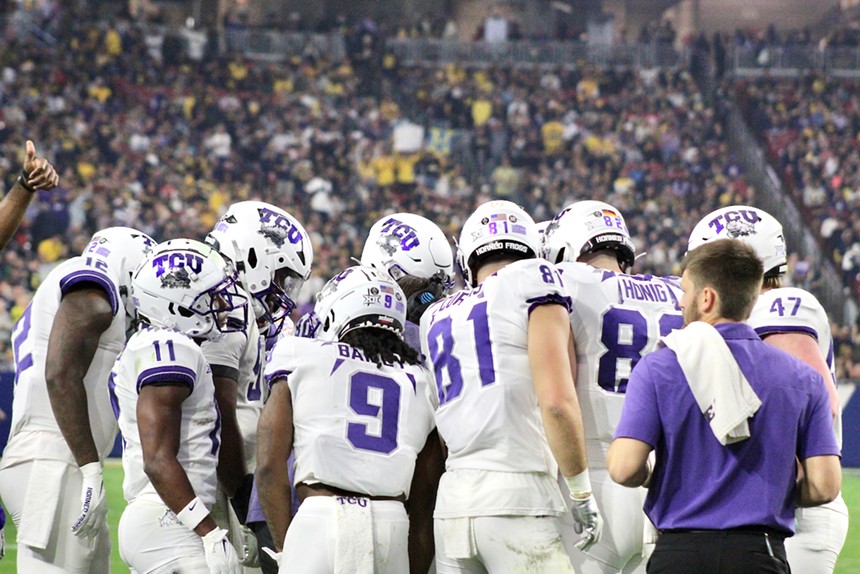 A Big Day for Sportsbooks

Michigan was favored to win by more than a touchdown on Saturday. But after the Wolverines twice failed to convert goal-to-go situations, and after quarterback J.J. McCarthy threw a pair of interceptions returned for touchdowns, the live odds switched at halftime, and the Horned Frogs, then up 18 points, were 7.5-point favorites.

The pregame total of points scored was set at 57.5, but the teams went on to score a combined 96 points. Sportsbooks had a profitable day as Arizona bettors wagered 52 percent of the money bet on the under (less than 57.5 points), according to DraftKings spokesperson Cassie Buontempo.

Sportsbooks made even more money on the point spread and moneyline, or who is going to win.

It was a losing bet, but another win for the bookmakers in the biggest state in the West for sports gambling. 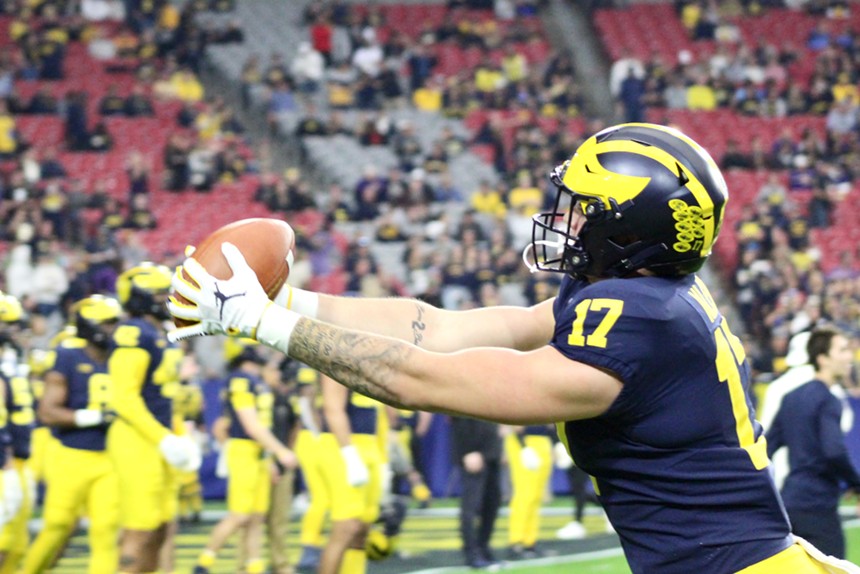 As the Southwest Airlines meltdown continued to slam Phoenix Sky Harbor International Airport in late December, some people in Dallas, near TCU’s campus, worried that they wouldn’t be able to make it to the Fiesta Bowl.

Christy Calderon, a lifelong TCU fan and Texas native who now lives in Utah, was in the minority when her Southwest flight to Phoenix from Salt Lake City International Airport wasn’t called off.

“We made it in okay,” Calderon told New Times. When her flight was looking questionable, “I said, ‘If we don’t make it, how are we going to drive?’”

As more and more flights from Dallas to Phoenix were axed by a struggling Southwest, American Airlines took to Twitter to throw some shade. “We see a lot of purple! #GoFrogs,” the airline quipped after setting price caps in order to make their flights more affordable for delayed travelers.

And when more Southwest flights out of Dallas Love Field were canceled, Dallas Fort Worth International Airport tweeted the hashtags #FrogsBy90 and #FiestaFrogs, garnering replies such as "I’m still mad at  Southwest Airlines for ruining our family vacation, but GO FROGS!"

“I’m excited, I’m nervous,” Alice Griffin, a TCU fan who flew from El Paso, Texas, told New Times when the Frogs took a 28-16 lead in the third quarter. “We are the underdogs. This is very surprising, but I knew Sonny Dikes took it to the next level.”

“Our home is the city of Glendale,” Leightman said.
KEEP PHOENIX NEW TIMES FREE... Since we started Phoenix New Times, it has been defined as the free, independent voice of Phoenix, and we'd like to keep it that way. With local media under siege, it's more important than ever for us to rally support behind funding our local journalism. You can help by participating in our "I Support" program, allowing us to keep offering readers access to our incisive coverage of local news, food and culture with no paywalls.
Make a one-time donation today for as little as $1.
Elias Weiss is a staff writer at the Phoenix New Times. A native of Charlotte, North Carolina, he reported first for the Northwest Arkansas Democrat-Gazette and was editor of the Chatham Star-Tribune in Southern Virginia, where he covered politics and law. In 2020, the Virginia Press Association awarded him first place in the categories of Government Writing and Breaking News Writing for non-daily newspapers statewide.
Contact: Elias Weiss
Follow:
Twitter: @ecweiss