Where to Find Delicious Arepas in Phoenix

Karina Mateus, co-owner of the Wow Que Rico food truck. Wow Que Rico
Arepas are corn cakes that are primarily eaten in Colombia and Venezuela as meals, accompaniments to meals, or snacks, but they have been part of South American culinary life since pre-Columbian times. Made with masarepa (pre-cooked cornmeal), arepas are the ultimate comfort food and can be quite addictive.

Arepa varieties are legion, with numbers ranging from 40 to 70 in Colombian culture. Some are stuffed with cheese or eggs, while arepa paisa is plain, without salt, and is a blank canvas. Try them with hogao, a spicy onion and tomato sauce, or with just a little butter and salt. Colombian arepas typically act as a base for whatever ingredients you want to put on top, from queso fresco and beans to chicken and avocado.

In contrast, Venezuelan arepas are opened up (but not necessarily separated) and stuffed to the gills with beans, pork, beef, chicken, cheese and more.

Finally, there are arepas de choclo, which are a sweeter version of the corn cakes.

Here are four places to indulge in various arepa styles in metro Phoenix: 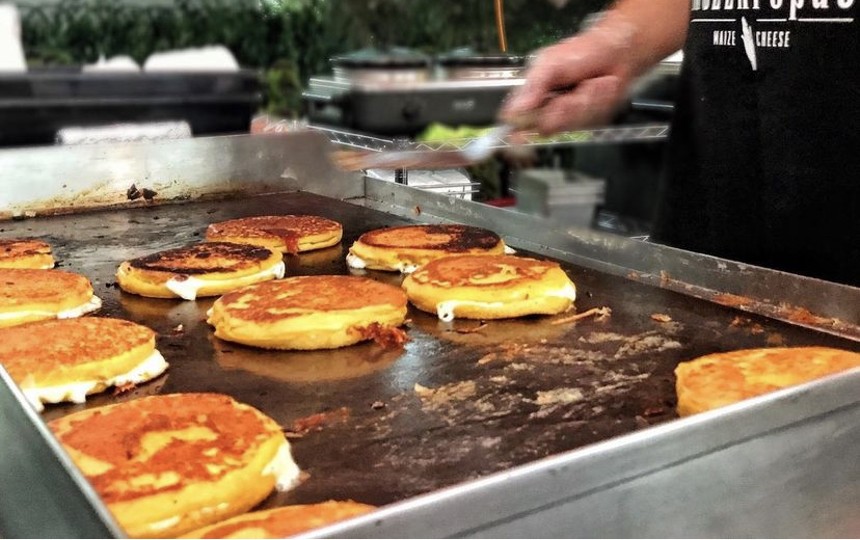 Arepas de choclo at MozzArepas.
MozzArepas
MozzArepas
Food Truck
817 North Second Street (at Luckys Indoor Outdoor)
This family-owned food truck was started in Elizabeth, New Jersey, in the 1980s by Luis and Flor Leon. In 1993, they changed the name from Jumbo Arepas to MozzArepas. Today, their three sons (Harvey, Alex, and Bryan) own and operate the business. MozzArepas expanded to multiple locations, including Arizona (starting January 2021), Florida, New York, Chicago. What sets it apart is its arepa de choclo, or sweet arepas. In addition to masa, this arepa has added sweet corn, imparting a sweet flavor and golden hue. The arepa is sliced in the middle horizontally, where mozzarella is added. You can get the arepas plain or add beef, chicken, or pork inside. The sweet balanced against the savory cheese and umami meat mixture makes this a must-try at least once in your lifetime. Currently, MozzArepas has set up shop at Lucky’s Thursdays to Sundays and, according to Bryan Leon, has plans to expand to the West Coast. The owners are also working on bringing wholesale boxes of arepas to Arizona. To find the truck's schedule, follow MozzArepas on Instagram. 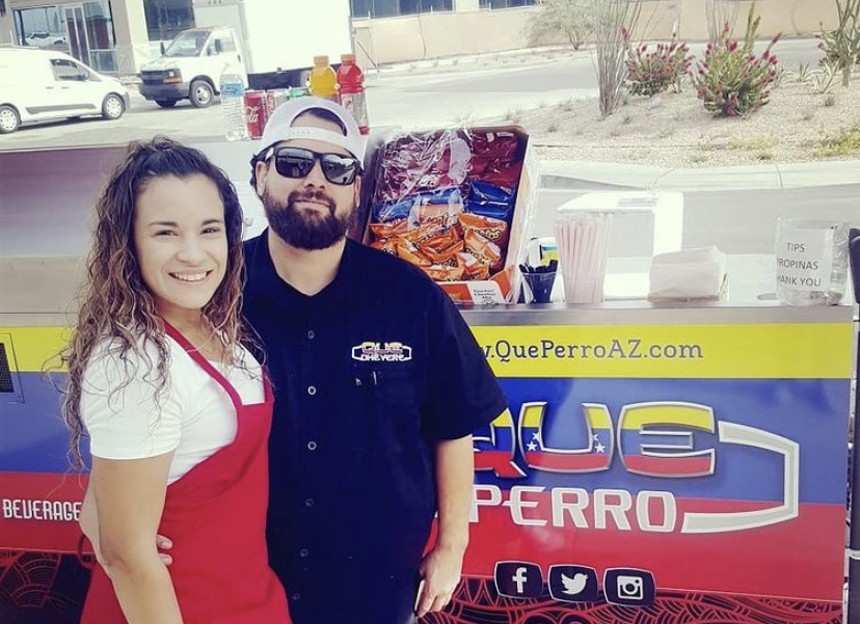 Maria Fernando and Orvid Cutler of Que Chevere.
Que Chevere
Que Chevere
Food Truck
480-474-4954
For delicious Venezuelan arepas, try Que Chevere. Owners Maria Fernando and Orvid Cutler bring a rich roster of Venezuelan food to the city. Their arepas rellenas (stuffed arepas) menu has something for everyone. We tried the most popular arepa, the Reina Pepiada, or “Curvy Queen,” named in honor of Susana Dujim, Miss World 1955; shredded chicken and creamy avocado with pops of herby cilantro offered a refreshing and filling bite. Que Chevere also has a brick-and-mortar location at 142 West Main Street in Mesa for those who wish to have a sit-down meal. There you'll find six different arepas on the menu.
click to enlarge

Owner Angelica Urrego with cheese-stuffed arepas at Arepa Babe.
Arepa Babe
Arepa Babe
Pop-Up
646-535-0442
You can find Arepa Babe at the Uptown Farmers’ Market on Wednesdays and the Downtown Farmers’ Market on Saturdays. Owner Angelica Urrego offers Colombian cheese-filled and vegan arepas, shaping and making them right in front of you on the griddle. Urrego used to purchase her masa from a supplier of Oaxacan heirloom corn, but now gets it closer to home. "Now I locally source my corn from someone in Yuma, thanks to [nonprofit] Local First, so the business stays in the state," she says. Don't miss Urrego's homemade hogao; you’ll want to buy a jar or two after enjoying your arepas at the market.
click to enlarge


Wow Que Rico
Food Truck
602-513-6041
Wow Que Rico (the name means "Delicious!") is a Colombian food truck owned by the Mateus Bustos family. Follow the family on Instagram to get the truck's whereabouts. Que Rico offers plain arepitas (little arepas about the size of silver-dollar pancakes) and arepas stuffed with gooey cheese, served with your choice of regular or spicy salsa. Try the combo plate to get a taste of several items (arepa, empanada, chorizo).
KEEP PHOENIX NEW TIMES FREE... Since we started Phoenix New Times, it has been defined as the free, independent voice of Phoenix, and we'd like to keep it that way. With local media under siege, it's more important than ever for us to rally support behind funding our local journalism. You can help by participating in our "I Support" program, allowing us to keep offering readers access to our incisive coverage of local news, food and culture with no paywalls.
Make a one-time donation today for as little as $1.