The restaurant will open Wednesday, October 23.

And if you're a mega fan, a ribbon-cutting ceremony will start at 8 a.m. 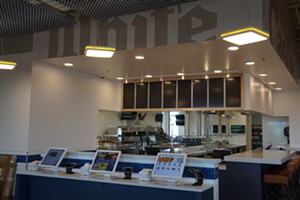 A look inside.
White Castle
The 24-hour burger joint has a pretty in-depth history, too. The first location was opened in 1921 during the Warren G. Harding presidency. Over the years, the burger joint spread across the country, earning its place in Beastie Boys songs, feature films, and in the hearts of college kids and burger buffs.

The official opening day, October 23, is a big day for the greater Phoenix area. It also happens to be the day Fry's Food Stores will be opening its latest location in downtown Phoenix.

For more information, visit the White Castle website.
KEEP PHOENIX NEW TIMES FREE... Since we started Phoenix New Times, it has been defined as the free, independent voice of Phoenix, and we'd like to keep it that way. With local media under siege, it's more important than ever for us to rally support behind funding our local journalism. You can help by participating in our "I Support" program, allowing us to keep offering readers access to our incisive coverage of local news, food and culture with no paywalls.
Make a one-time donation today for as little as $1.