Byblos in Tempe Has Closed, Grimaldi's Has a Ghost Kitchen, and More Phoenix Food News Fly Bye is here now. Fox Restaurant Concepts
It's Friday, and we have lots to catch you up on in the Phoenix food world. Let’s go.

Fly Bye Is Now Open at The Yard 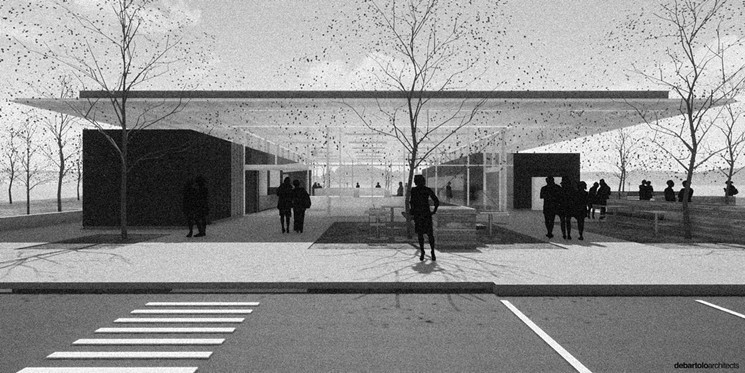 The Air Guitar Convenience Store is Back in Action

Remember Air Guitar, which was supposed to be opening next to the Epicenter at Agritopia in Gilbert in 2020? The project — a convenience store initiated by two couples (Craig and Kris DeMarco, the restaurateurs and co-founders of Upward Projects, and Eric and Elissa Seitz, “retail store gurus” of Bro Retail Group) — broke ground this week. The 5,000-square-foot store will sit under a floating 9,000-square-foot canopy, which will probably be a sight to see when it opens next summer/fall at the northwest corner of Higley and Ray roads (specifically 1566 South Higley Road in Gilbert). Air Guitar will serve coffee, tea, beer, wine, a healthy-leaning grab-and-go fare. Our rapidly growing local chain of Mediterranean restaurants is opening its 24th location in January 2021 at the Steelyard development, off Chandler Heights and Gilbert roads in Chandler. The new Pita Jungle location is now hiring for more than 50 positions, including chefs, servers, hosts, and more. Hiring managers will be at 5025 South Gilbert Road, Suite 8, in Chandler upcoming Tuesdays, Thursdays, and Saturdays, so job seekers may apply in person. You can also apply online at the Pita Jungle website.

Byblos Restaurant Has Closed in Tempe

Sad news for Tempe eaters this week. The family-owned, old-school Lebanese eatery Byblos Restaurant on lower Mill Avenue announced its closure via social media this week. Byblos had been in business for more than 30 years, serving Middle Eastern and Mediterranean fare. COVID was not cited as the main culprit; rather, it was the death of co-owner Samir Mirza in August. But the closure post did leave us with some small, vague hopes for more lamb dishes and Greek salads in our future: “Who knows, maybe someday there will be a Little Byblos Restaurant.”

Four Peaks and The Joy Bus have teamed up once again.
Four Peaks Brewing Co.

The local beer scene continues to burn it up with new beers. Four Peaks Brewing Co. has released The Joy Bus WOW Wheat Ale — a charitable brew in partnership with local meal-to-home delivery operation The Joy Bus. The latest release is “an American-style wheat ale brewed with sweet orange peel and fermented with Four Peaks’ house yeast,” according to a press release, and some proceeds from every bottle, can, and pint sold (found in stores throughout Arizona) goes toward the Bus.

See what Valley restaurants are offering takeout, delivery, and dine-in services with our Phoenix Restaurant Directory.
KEEP PHOENIX NEW TIMES FREE... Since we started Phoenix New Times, it has been defined as the free, independent voice of Phoenix, and we'd like to keep it that way. With local media under siege, it's more important than ever for us to rally support behind funding our local journalism. You can help by participating in our "I Support" program, allowing us to keep offering readers access to our incisive coverage of local news, food and culture with no paywalls.
Make a one-time donation today for as little as $1.