Downtown Phoenix's old Downtown Deli closed in 2015, but the owners of the new Deli Tavern have preserved the space's sign. Patricia Escarcega
When a new spot opens in town, we can't wait to check it out — and let you know our initial impressions, share a few photos, and dish about some menu items. First Taste, as the name implies, is not a full-blown review, but instead a peek inside restaurants that have just opened, sampling a few items, and satisfying curiosities (yours and ours).

A former mainstay of the downtown Phoenix power lunch scene is back — sort of.

The Deli Tavern — a collaboration between hospitality group Genuine Concepts and music venue owner Charlie Levy — debuted last month in the space that was formerly known as the Downtown Deli, a casual breakfast and lunch spot that served downtown Phoenix for more than 40 years.

The original Downtown Deli closed in 2015, with its former owners citing the rising costs of doing business in downtown Phoenix. Shortly after, Genuine Concepts, the team behind stylish neighborhood restaurants and bars like The Vig and The Womack, purchased the space, which has remained largely unoccupied for the past two years (a location of Short Leash Hot Dogs briefly operated out of the space in 2016).

Both Levy and the Genuine Concepts team have a knack for designing neighborhood spots that feel like they've been around for decades, and their reimagining of this classic downtown space is no exception.

The Deli Tavern has a new oak bar and vintage-inspired design features like checkered floors and exposed brick walls.
Patricia Escarcega
The restaurant's original exterior sign has been preserved, complete with an updated sidewalk patio with a front-row view onto Central Avenue and the light rail.

The interior, though, will be nearly unrecognizable to those who remember the old Downtown Deli. The space has been renovated extensively, outfitted with new checkered flooring; a long oak bar; leather booths and vintage-style industrial lighting; exposed brick walls; and cheeky flamingo-print wallpaper (flamingos are playfully integrated throughout the restaurant's interior design). Many of these components are new to the space, but they have a vintage, broken-in quality that makes them feel as if they've been here all along. A wall now closes off the area that used to be a cafeteria-style open kitchen, and a gallery wall is neatly adorned with black-and-white portraits of notable Phoenix residents.
Patricia Escarcega
The biggest change, however, is the restaurant's layout. If you were a regular at the old Downtown Deli, you probably remember that the restaurant featured a cafeteria-style open kitchen in the back. There's now a wall near the back of the space, effectively closing off the kitchen from view.

Another notable design element is a new gallery wall, which features black-and-white caricature portraits of well-known Phoenix scenesters and celebrities. The portraits were created by artist Jeremy Drysdale, and they help imbue the space with a sense of history and place. A visit to the Deli Tavern includes a complimentary basket of the restaurant's thick-cut potato chips.
Patricia Escarcega
The old Downtown Deli was a straightforward breakfast and lunch spot with no booze. The new Deli Tavern, however, has a full bar, complete with a classic cocktails, local beers on draft, and a small but thoughtful wine list that offers glasses in both six- and nine-ounce pours.

Of course, there's always coffee, which is available for 50 cents a cup for dine-in only (to-go orders are $1.50).

The Deli Tavern serves breakfast, lunch, and dinner, including late-night service. The kitchen stays open until midnight most days, and 2 a.m. on weekends.

The menu, which is described as "over-the-top comfort food," was designed by chef Justin Woodard, formerly of The Vig, and features a crowd-pleasing assortment of classic American comfort food. It should be noted that portions, in general, tend to be enormous — the Deli Tavern is already emerging as one of the better values in downtown Phoenix dining.

Service was friendly and fast on my recent visit, with a complimentary basket of homemade, thick-cut potato chips landing on the table moments after the menus arrived. 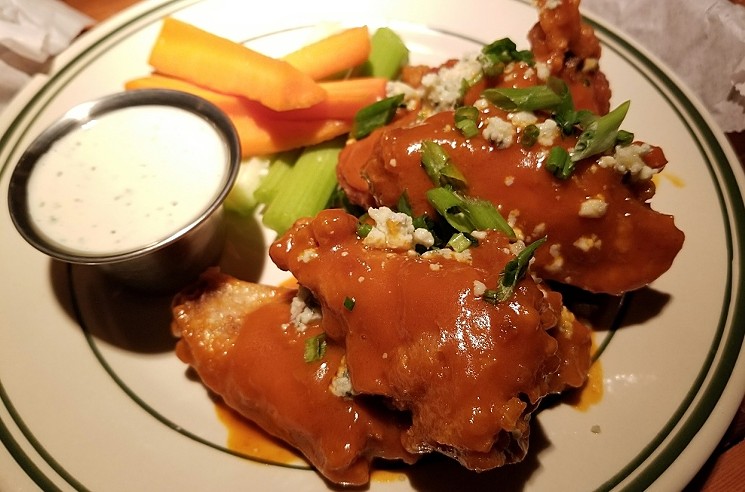 Deli Tavern's "crispiest wings" are both saucy and crispy.
Patricia Escarcega
The "Snacks" portion of the menu includes starters like smothered hash browns, shrimp and fries, and homemade turkey noodle soup. My server recommended the house wings, otherwise known as the "crispiest wings." The name, thankfully, isn't an empty boast. The wings were bathed in a hot, vinegary Buffalo sauce — some bleu cheese crumbles helped round out the sting — but they were mostly just tantalizingly meaty and crisp.

The entree menu is dominated by American comfort food (burgers, mac 'n' cheese, and deli sandwiches), with a smattering of midcentury nostalgia (meatloaf, steak and potatoes). There are also a few outrageously decadent specialties, including a fried peanut butter and jam sandwich, and an extra-cheesy "Sonoran Cheesesteak."

The Deli Burger at Deli Tavern is lush and juicy.
Patricia Escarcega
My server recommended the house Deli Burger, which comes with a side of the house chips. The patty was cooked to a lush, juicy medium-rare, and bolstered by extra-crispy strips of bacon, savory scraps of poblano chiles, plus a dense, oozing thicket of melted Swiss cheese. It was rich, drippy, and flavorful.

Naturally, deli sandwiches are well-represented on the menu. But don't overlook a slightly twisty house specialty like the Pig and Swiss. Crisped-up prosciutto, salami, tomato, Swiss cheese, and a slightly runny fried egg are meticulously layered in between thick slices of extra-buttery, toasted sourdough, with some chile-infused mustard adding a pleasant hint of spice. It's a luxuriantly rich and savory sandwich that also happens to be Instagram-friendly.

The Pig and Swiss sandwich at the Deli Tavern features crispy prosciutto, a fried egg, and spicy mustard.
Patricia Escarcega
For dessert, there's homemade apple pie, served a la mode. But if you're like me, you'll probably only have room for a Jimmy Cake, a thick, chocolate cookie sandwich with a sweet cream cheese filling. The cake was overly dense and a little tough on my visit, although the combination of salted chocolate and cream was nearly flawless.

Even with so many changes afoot — new owners, a new menu, and a big overhaul in design — the Deli Tavern so far feels very much like its predecessor in at least one meaningful way: It's a friendly and well-worn neighborhood haunt in a part of the city that could certainly use a few more of those. And with its appealing menu of polished comfort food and bar grub, plus its old-fashioned neighborhood tavern airs, this new-school spot will hopefully keep the old Downtown Deli sign lit up for years to come.

Dessert options at the Deli Tavern include Jimmy Cakes, chocolate cake sandwiches with a sweet cream filling.
Patricia Escarcega
KEEP PHOENIX NEW TIMES FREE... Since we started Phoenix New Times, it has been defined as the free, independent voice of Phoenix, and we'd like to keep it that way. With local media under siege, it's more important than ever for us to rally support behind funding our local journalism. You can help by participating in our "I Support" program, allowing us to keep offering readers access to our incisive coverage of local news, food and culture with no paywalls.
Make a one-time donation today for as little as $1.
Patricia Escárcega was Phoenix New Times' food critic.
Contact: Patricia Escárcega
Follow:
Twitter: @piescarcega