Farmboy in Chandler Is One Future of the Arizona Sandwich

The Friday and Saturday grass-fed brisket special from Farmboy. Chris Malloy
Nobody barbecues with Arizona beef. In any case, almost none of our esteemed barbecue joints do. Local beef is too inconsistent and too expensive, the thinking goes, and people don't want to pay a dollar or two more for brisket or short ribs. In a state with a proud foundation of “Five Cs,” one of them being cattle, the monopoly Midwestern beef has on our barbecue scene feels odd. But its grip may be loosening.

One Chandler shop, in reimagining how a neighborhood eatery can puzzle into local food sources and supply chains, has rejected the barbecue status quo. And, more broadly, it has elevated the sandwich shop.

That shop — Farmboy Market, Meats, Sandwiches — sources Arizona beef. Not only is its beef raised a drive north from Phoenix, it is 100 percent grass-fed, making it a barbecue unicorn for another reason. Most barbecue professionals skip grass-fed in favor of corn-fed or corn-finished beef. Though larded with flavor, 100 percent grass-fed beef is leaner, offering a slimmer margin for error and different zones of flavor. The eatery buys steers 5- to-7-years-old from Arizona Grass Raised Beef Co. (Cattle gains flavor as it grows old, but most commodity steers are swiftly fattened on corn and slaughtered at two years or younger.) Arizona Grass Raised's Chino Valley processing plant breaks down whole animals for Farmboy, then delivers them to the Chandler shop.

That leaves Oren Molovinsky — who co-owns Farmboy with his wife, Diana — with a lot of meat to smoke for sandwiches.

He smokes brisket for sandwiches, chuck for burgers, rib-eye and flatiron for a “Verde Valley” cheese steak. When he smokes pork, he doesn’t smoke a butt, shoulder, or belly, but a half-hog.

If a split pig goes into the smoker on Friday morning, Saturday’s diners can have ribs for breakfast. Crispy bits apart from the usual pork cuts find a home in preparations like a breakfast burrito, the tortilla made from white Sonora wheat, just like all the bread, cookies, and whoopie pies.

What sets Farmboy apart from your usual sandwich shop with great sandwiches, soup, salad, and breakfast is that Farmboy is plugged into premium local supply chains on an incredible, eco-conscious level.

The sandwich shop even has its own farm. 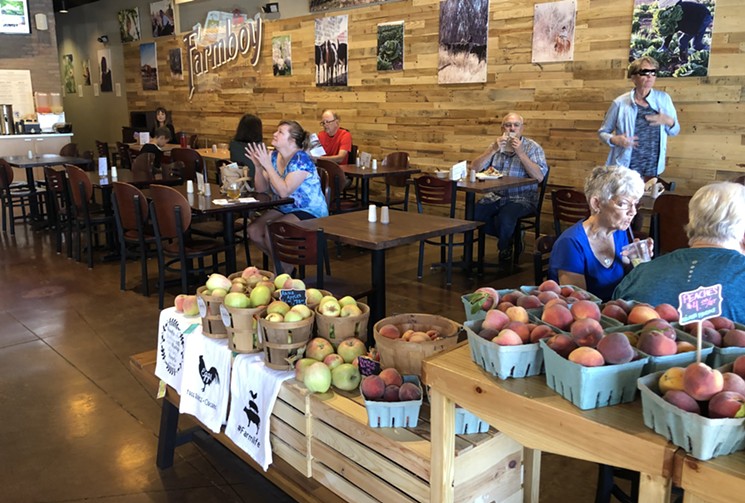 The market at Farmboy is part, "here’s what you’re eating."
Chris Malloy
“We approach it from the whole animal,” Oren says of sourcing. “Our menu is built around grass-fed beef, and a whole pig, and a whole chicken ... We made a commitment when we were developing this concept that we were going to work with farmers and ranchers, and not have them work for us.”

His forward-thinking idea is to take the best of what the local supply chain has to give. Oren works with the likes of Crooked Sky Farms, Hayden Flour Mills, Danzeisen Dairy, The Meat Shop, and Wilson Farms. You can see the produce on tables as you walk into the strip-mall shop: Roma tomatoes, mesquite honey, zucchini, black beans, heirloom onions from Crooked Sky, a fat rainbow of heirloom tomatoes from Yuma, and tiny purple-yellowish plums from Molovin Farms.

Molovin Farms, the Molovinsky family farm, is a three-and-a-half acre plot in Chandler. It furnishes Farmboy with produce, like fruit from its orchard, and chicken eggs, some the light brown of milky coffee, some a watercolor-blue. It also has goats.

You can buy this produce: whole to take home, or on your sandwich. Local produce and products at the Farmboy "market."
Chris Malloy
“We don’t do a booming business from our market,” Oren says. “But it’s kind of part, here’s what you’re eating. Because we take it right from the market and go prepare it. So the tomatoes on your sandwich were here [at the market] yesterday, and today we sliced them for sandwiches.”

This kind of thinking isn’t totally new to metro Phoenix. But considering how deeply Farmboy is immersed in local food systems, coupled with the fact this simple sandwich shop is unattached to a big chef name, there is something new and fresh at work here.

There’s an electricity for the future and present of food — and Farmboy’s is good. Bread is baked daily. Dough comes from a mixture of Bluebeard durum and white Sonora wheat developed with Jedi baker Don Guerra of Barrio Bread in Tucson, and blended using his decades-old dough mother. Guerra designed Farmboy's soft, minimally toasty rolls with barbecue in mind (as most of Farmboy’s meats are smoked).

Approaching Farmboy from the Chandler street, you would never expect to find a decent tortilla inside. But the pliant tortillas that tightly wrap breakfast burritos are a real surprise. Phoenix’s La Sonorense Tortilla Factory makes them, and from the same flour blend as the bread.

“When they come out and drop off a batch of tortillas, they pick up flour,” Oren says. “They make them to their specs and their recipe, but they use our grains in it.”

Available Fridays and Saturdays only, sliced brisket features strips of pink in the middle. They lack the dissolve that the brisket of a more conventional barbecue place may have, but retain the more mature, mineral-driven flavor of grass-fed meat. You feel good, rather than ready for a 100-year nap, after eating it — which counts for something.

Farmboy's cheese steak reps the attention to detail you can expect from Oren, who has varied food experience. (He oversaw operations at Chompie’s after moving to Arizona in 2011; he owns a Szechuan hot pot restaurant in Arlington, Virginia.)

For this cheese steak, Oren pulls grass-fed rib-eye or New York strip from the smoker when still rosy. He then chills the meat, slices it, and browns it over a flattop grill. It's often rib-eye, like in Philly, but from Arizona grass-fed cattle, smoked over wood salvaged from in-state pecan farmers’ trimmings, and folded onto heritage-grain bread carefully designed, by a master, for smoked meat.

Sadly, when at Farmboy, I didn’t hear about this cheese steak until after I had eaten a brisket sandwich and started on a breakfast burrito. But even the Philly kid in me — who has only had two or three cheese steaks outside my home state since the 1990s — plans to drive the 30 minutes to try one.

Farmboy Market, Meats, Sandwiches. 1075 West Queen Creek Road, #1, Chandler; 480-361-2153.
Hours: 8 a.m. to 5 p.m. Monday to Saturday; 8 a.m. to 3 p.m. Sunday
KEEP PHOENIX NEW TIMES FREE... Since we started Phoenix New Times, it has been defined as the free, independent voice of Phoenix, and we'd like to keep it that way. With local media under siege, it's more important than ever for us to rally support behind funding our local journalism. You can help by participating in our "I Support" program, allowing us to keep offering readers access to our incisive coverage of local news, food and culture with no paywalls.
Make a one-time donation today for as little as $1.
Chris Malloy, former food editor and current food critic at Phoenix New Times, has written for various local and national outlets. He has scrubbed pots in a restaurant kitchen, earned graduate credit for a class about cheese, harvested garlic in Le Marche, and rolled pastas like cappellacci stuffed with chicken liver. He writes reviews but also narrative stories on the food world's margins.
Contact: Chris Malloy
Follow:
Twitter: @yollamsirhc
Instagram: @malloy_chris/