"Goth waffles" made with activated charcoal and topped with fresh fruit. Sam McGee
Walk into Verdura and feel like you're at home, jamming out to your favorite '70s and '80s music, watching geeky cartoons, sipping on a beer and eating some delicious food. Plug your computer into one of the custom power packs at each table and stay awhile. This is Verdura, the new plant-based restaurant opening at Seventh Street and Missouri Avenue on March 1.

When folks enter the restaurant, they'll order at the counter and pick out a table to sit at where servers will bring out their food and attend to any other needs they may have throughout their stay. “It's a space for every type of person. If you want to get a fast bite to eat during lunch, you can do that, or if you want to hang out and do homework for four hours, go ahead," says co-owner Julia Chugerman. "We really want to hit every kind of person."

Verdura is taking over the space vacated by Pomegranate Cafe a few months ago, yet is similarly plant-based. Verdura means vegetable in both Spanish and Italian, and the goal is to make vegetables the star of every dish, not just the counterpart to a protein or starch.

"We got the idea based on our love of plant-based food. My family’s Italian, our investor is Italian, so we kind of wanted to go back to our roots a little bit," Chugerman says, "even though the menu is more globally inspired than just straight Italian." Co-owners chef Chris Gruebele and Julia Chugerman — also the front of the house/trend guru/everything else person.
Sam McGee
Chugerman is 100 percent vegan, although her co-owner, chef Chris Gruebele, is not. The two met while working at The Vig in Scottsdale and bonded over the vegan and vegetarian food Gruebele would make for Chugerman to snack on. When the opportunity came to open their own restaurant, they say they jumped at the chance and haven't looked back, imagining a place both vegans and non-vegans can equally enjoy.

“I know the vegan community is following us and they’re going to know that we’re here and come in and eat, but I want the friends and relationship partners of those vegans to come in and not be bummed," says Gruebele. "I want them to come in and be excited and still realize that it’s really good food.”

The worldly menu is expected to include items like carne asada nachos made with seitan — a pseudo meat product made from wheat. There's also a sushi burrito with carrot lox, a mushroom po'boy sandwich, and vegan clam chowder. Don't forget the "goth" waffles with activated charcoal for dessert, or a warm cookie topped with sorbet — thought to be the first vegan pizookie dish in Arizona.

“It’s out there in a good way. It’s not boring. It’s not your typical vegan food," Chugerman says of their eclectic style.

Gruebele has a tendency to cook with a Middle Eastern and Southwestern flare, but loves to experiment with different cuisines and flavors. Growing up in North Dakota, his grandparents had a farm and loved to garden, pickle, and preserve, so making the most of fresh and local ingredients was ingrained in Gruebele early on. 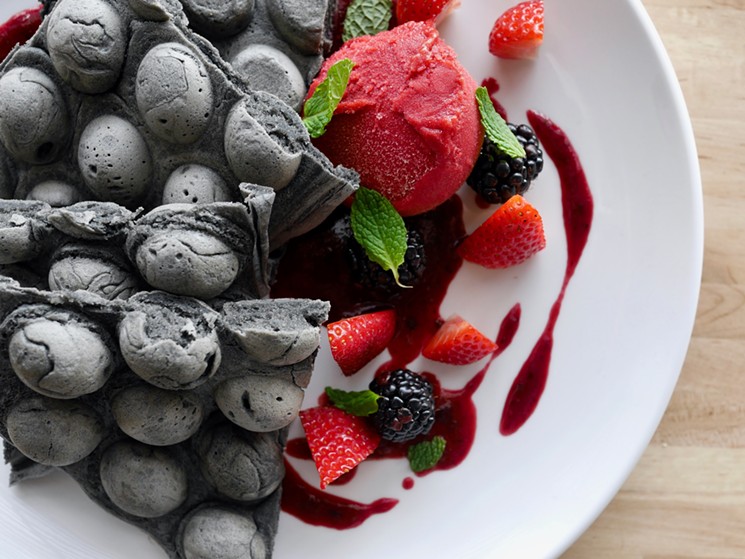 "Goth waffles" made with activated charcoal and topped with fresh fruit.
Sam McGee
To that end, Verdura will be going the local route whenever possible while supporting small business. Their kombucha supplier is from Arizona, and they're hoping to partner with Noble Bread for their bread — also based in Phoenix. Their coffee purveyor is Portland's beloved Stumptown brand, and they're using olive oil straight from Greece that's certified organic.

The other very important part about Verdura is its music theme. On a recent visit, hits from the Eagles, Fleetwood Mac, America, Seals and Crofts, and others were playing over the loudspeakers. One wall inside the restaurant features a display of colorful records made by Gruebele, who also has a background in graphic design. Classic movies and music videos will be projected on another wall. The pair are also planning a '70s, basement-style hangout area in the front complete with a comfy couch perfect for listening to music while waiting for to-go orders — or just relaxing with a comic book.

“Not everyone likes plant-based food, but everyone loves music, so it’s kind of an experience," says Chugerman, "an opportunity for every type of person, not just vegans."

And Verdura is way more than just a vegan eatery. It's the neighborhood hangout where people can plop down and listen to tunes, do their homework or take work calls, and grab some coffee or juice to go. Patrons are also encouraged to win big at trivia nights, meet up with friends for "Hipster Hour" held daily from 3 to 6 p.m., or drink a Bloody Mary or two during weekend brunch ("Band T-Shirt Brunch") on the dog-friendly patio. Gruebele and Chugerman want customers to have a space to both listen to tunes and try some tasty food.
Sam McGee
And it won't break the bank. “That's the idea to have it be affordable, first of all, because we don’t want people to only be able to come here once a month. We’d rather take a dollar off the price so people can come two, three times a month. Or a week!" says Gruebele. “If you do live down the street and you do come here numerous times a week, you can get different things. You definitely won’t get bored."

Verdura is opening officially on March 1, but in the meantime Chugerman and Gruebele are walking around and meeting their neighbors in the shopping center and dropping off samples of their dishes, introducing many to their first taste of vegan food.

"I’m not trying to make people vegan. A lot of people have a distaste for it. I'm trying to break the stereotype that vegan food is gross and not filling. And I’m not wearing Birkenstocks right now," jokes Gruebele.

Verdura. 5555 North Seventh Street, #108; 602.283-5168.
Monday through Thursday 11 a.m. to 9 p.m.; Friday 11 a.m. to 10 p.m.; Saturday 9 a.m. to 10 p.m.; Sunday 9 a.m. to 9 p.m.
KEEP PHOENIX NEW TIMES FREE... Since we started Phoenix New Times, it has been defined as the free, independent voice of Phoenix, and we'd like to keep it that way. With local media under siege, it's more important than ever for us to rally support behind funding our local journalism. You can help by participating in our "I Support" program, allowing us to keep offering readers access to our incisive coverage of local news, food and culture with no paywalls.
Make a one-time donation today for as little as $1.