The iconic spaghetti spot has been open since the 1970s, but the old historical building was originally built as two individual residences, The Baker House and the Cole Mansion. Both homes were constructed in 1921 and they were joined as one building in 1940, first to serve as a furniture store and later as the pasta restaurant.

And then there are the ghostly tales. The internet is ripe with stories of haunted happenings. People say a man was murdered while sleeping on the second floor and a woman was brutally murdered in the basement of the Baker House in the 1930s, and their spirits are still very present.

Rumor has it that staff have reported cold spots, strange sounds, flickering lights, furniture moving, and floating apparitions, not that the staff manning the host station would give me any specifics. None said they'd seen an actual ghost, still, they changed the subject pretty quickly which told me there might be truth to the tales.

But instead of spine-tingling, I was greeted with hordes of people, a Saturday night herd of hungry patrons. There were Gen Y-ers wearing sundresses and Converse sneakers, parents trying to wrangle rogue toddlers, and a mix of date-night couples in all ages and ranges of dress, all milling about in the lobby waiting for a table with hungry anticipation.

This was my first visit to this Old Spaghetti Factory, or any Spaghetti Factory for that matter. A chain without the chain feel, the first location opened in Portland in 1969 and became known for its unique décor, including an old-fashioned trolley car for guests to dine in at every location. They also offer affordable three-course meals, the most popular entrée being spaghetti with Mizithra cheese and browned butter. The Old Spaghetti Factory has plenty of private booths and private dining rooms.
Allison Young
I mostly knew it as the spot my next-door neighbors went on their first date back in August 1974.

He picked it because he’d been to the Denver location and saw the new franchise as “very cool,” a place you’d want to impress a date. She’d never been before, but was as impressed by her Mizithra cheese spaghetti as she was with her date.

Needless to say, the restaurant and the relationship worked. They go back once or twice a year and recently celebrated their 47-year anniversary there, this time dining among a throng of teens dressed up for prom. I saw them as they headed out the door, not in formal wear but fancy attire nonetheless, and they had that same teen gleam in their eyes. 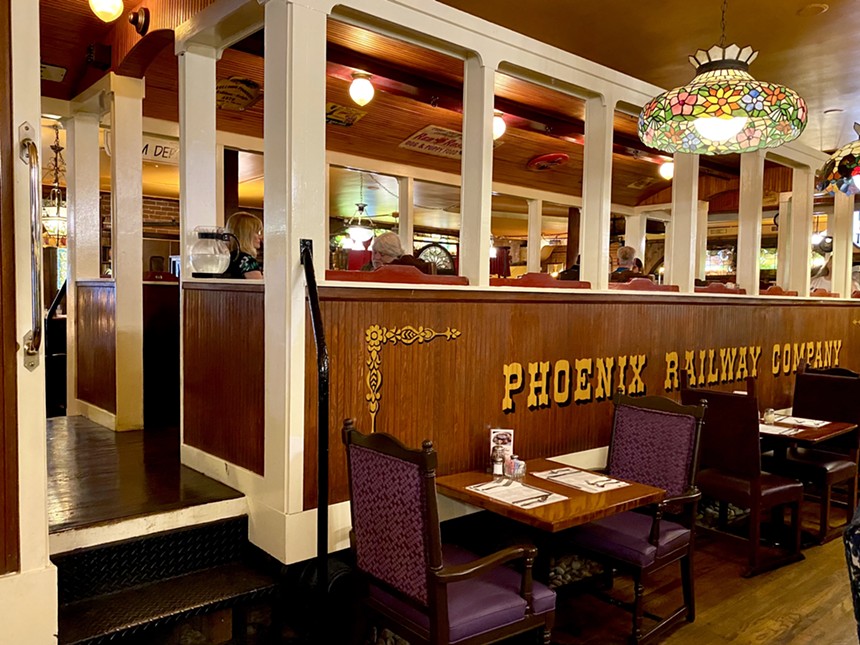 Dine in an old-fashioned trolley car at The Old Spaghetti Factory.
Allison Young
The décor hasn’t changed much from their first date, my neighbors said, and I can believe it. When my table was ready, I followed the hostess past the bar area and its candy cane-striped columns, past partitioned private booths lined with old books, private dining rooms accented with framed antique art, and the standout refurbished Phoenix Railway trolley car sitting at the center of it all.

Whether you believe in ghosts or not, these walls have seen some things, the storied history ingrained in the rich wood accents and antique furniture, and reflected in the stained glass windows and showpiece chandeliers. Other than an exterior facelift in 2015 that stripped the white layers of paint off the building, bringing it back to its original red brick glory, it was pretty much how it looked in the '70s.

My neighbors hadn't heard it was haunted, and neither had the girls standing around the lobby, in town for a volleyball tournament. Their parents had picked the restaurant because it worked for a crowd, offering ample seating for large groups and picky eater options like basic butter and noodles.

My server was all smiles and recommendations. Certainly not intimidated by any lurking spirits, she enthusiastically suggested the Italian cream soda, a fizzy sip topped with cream that comes in a take-home keepsake glass. As for food, she said a lot of people came in just for the Mizithra cheese and browned butter pasta, but her mom was a big fan of the chicken parmesan. For those looking for something a little spicy, she recommended the Spicy Spaghetti Vesuvius. I went with the Mizithra.

Now, I’d love to say the food was life-changing or even unforgettable, but that would be a lie. My starter salad was a little sad, a handful of lettuce with shredded carrots and croutons that mirrored the premixed stuff from the supermarket. The bread, although hot and a whole loaf, was dry and dense. I had hope for the pasta and its imported cheese from Greece, but it was little more than noodles in a bath of browned butter. The saving grace was sopping up the browned butter with the bread, but it was more about the indulgent act than the taste.
click to enlarge 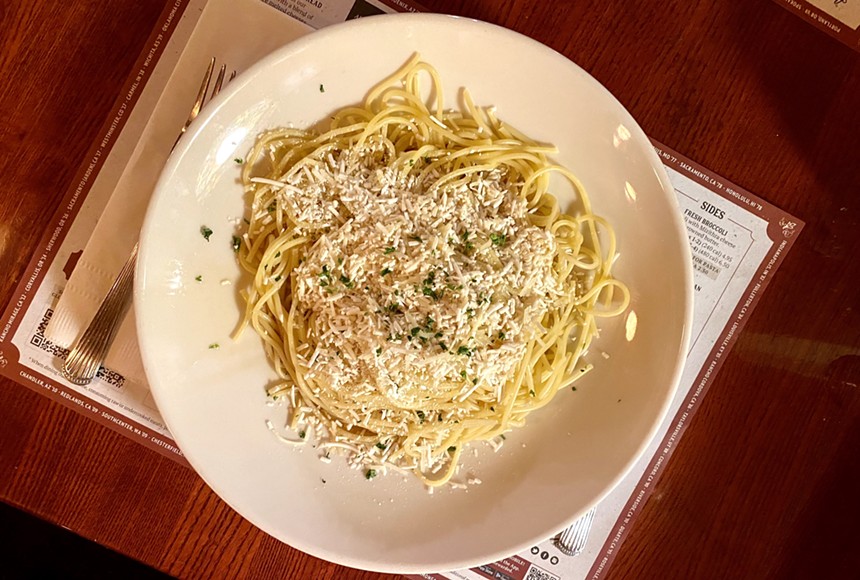 The Mizithra cheese and browned butter is a Factory favorite.
Allison Young
The food was a letdown, but the people watching wasn’t. At the next table was a teen celebrating her birthday with her grandparents. It was the birthday girl’s first time at the Spaghetti Factory and the grandparents’ first time in 35 years. They all smiled as the staff paraded out to sing happy birthday, delivering slabs of chocolate cake, cheesecake, and tiramisu.

I finished with my single scoop of spumoni, a Spaghetti Factory signature described as a mix of chocolate, pistachio, and cherry ice cream, that really tasted just like chocolate.

While I waited for the check, I scanned the place for spirits, but instead saw smiles. There was a dad happily diving into hefty meatballs, a couple dining in the trolley clinking wine glasses with flirty grins, and a large group celebrating a birthday at a table covered in presents and surrounded by balloons.

Still, when my server came by I couldn’t help but ask if she’d experienced anything unearthly. She swears she saw a plate move in the kitchen once, but she said it more with fervor than fright. 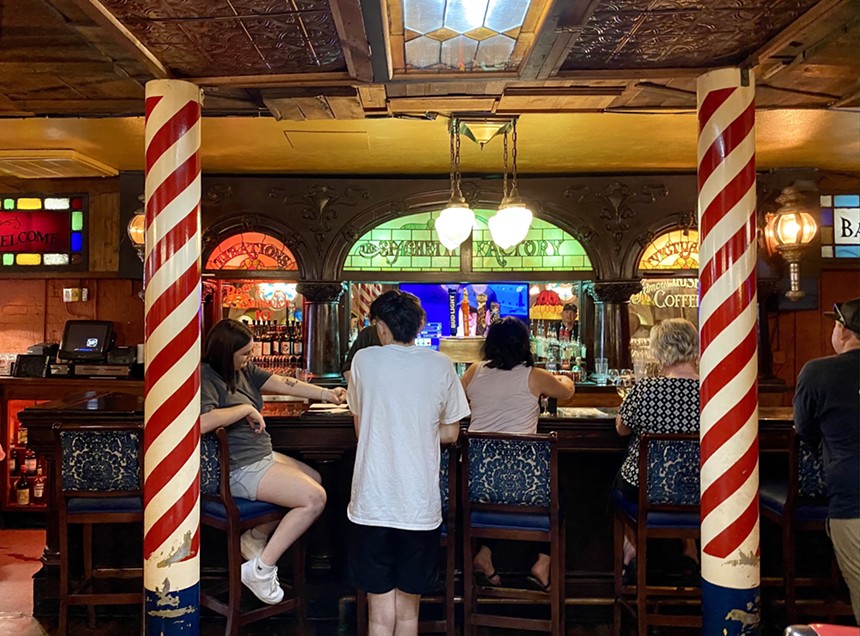 The bar area has wood accents and candy cane columns.
Allison Young
Ok, so if guests weren’t there for the ghosts, why were they there? Why had the grandparents chosen this restaurant to celebrate their granddaughter and why did my neighbors return year after year?

I looked around at the diners and décor, and couldn’t help but feel nostalgic, like I too was celebrating something special. Maybe it's the fact you could order the same meal for your 47th wedding anniversary as your first date in the storied setting that made you feel like you were stepping back to a simpler time, when an Italian soda and a plate of pasta could make you forget all the ails of the outside world. I could only guess that’s why the supposed spirits stuck around too.

https://www.osf.com/location/phoenix-az/
1418 North Central Avenue
602-257-0380
Hours: Sunday to Thursday 11 a.m. to 9:30 p.m.; Friday and Saturday 11 a.m. to 10 p.m.
KEEP PHOENIX NEW TIMES FREE... Since we started Phoenix New Times, it has been defined as the free, independent voice of Phoenix, and we'd like to keep it that way. With local media under siege, it's more important than ever for us to rally support behind funding our local journalism. You can help by participating in our "I Support" program, allowing us to keep offering readers access to our incisive coverage of local news, food and culture with no paywalls.
Make a one-time donation today for as little as $1.