Twisted and Delicious: The Salted Knot Fills a Pretzel-Shaped Hole in Metro Phoenix The Curbside Special from The Salted Knot. Maria Vassett
While many folks were busy carving flowers into focaccia and crafting sourdough starters during the pandemic, Maria Vassett and Chad Day had other plans for their flour: hot pretzels.

Their first attempt was good, Vassett says, but not perfect. “We tried one recipe, and that wasn’t it, so we tried changing some things, and we didn’t like the results as much as the first round, so we started messing around with the first recipe, adding and subtracting, until we got it just right.”

Once Vassett and Day finalized their secret recipe, they decided to give the pretzels out to friends and neighbors — and the response was tremendous. As people tore into the taut, crusty exteriors and reached the soft insides, they told the pair that they absolutely had to start selling the knots.

The two bakers have day jobs — Vassett in the behavioral health field, and Day at the writing center at Mesa Community College, where he taught English for years. In addition, Vassett is an acclaimed concert photographer for outlets from Phoenix New Times to Rolling Stone who watched as live-music events ground to a halt. The adventurous couple, who just celebrated their fourteenth anniversary, enjoy a multifaceted life, so they jumped on the idea of a side hustle. When people suggested that she and Day sell their pretzels, they thought, “Let’s try it. What’s the worst that can happen?”
click to enlarge 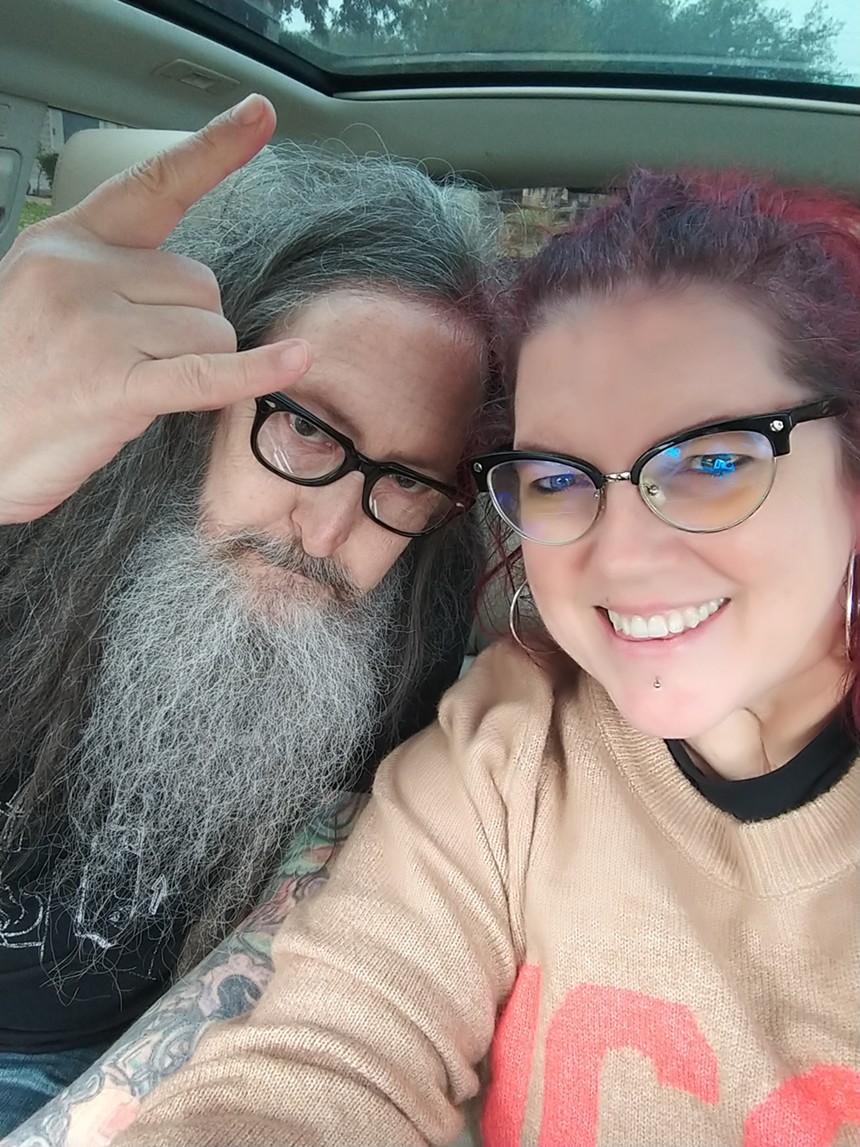 Chad Day and Maria Vassett of The Salted Knot.
Maria Vassett
They got all their licensing in place and turned their kitchen into pretzel central. They came up with a name, The Salted Knot, and used social media to let people know what they had to offer and how to order and pick up the handcrafted treats.

Day became a one-person baking machine, and Vassett handled the orders, strategically scheduling baking times with pick-ups so that each customer received hot, fresh, buttered and salted pretzels right from the oven.

The response was more than they could have hoped for. “People were spreading the word. We couldn’t believe how many people kept coming back and telling us how wonderful the pretzels were. It was exciting and motivating,” Vassett says.

The menu includes hearty-sized savory knots and individual buttered and salted bites. There are sweet knots and bites, too, topped with butter, sugar, and cinnamon. And if explosions are your thing, don't miss the Peanut Butter Bombs — bites stuffed with peanut butter.

All of the above come in vegan versions, as well. The only menu items without such an option are the nacho cheese and the proprietary Sweet Heaven Dip, a heady sweet and creamy mixture.
click to enlarge

Salted pretzel bites with cheese.
Maria Vassett
Making delicious pretzels is only part of the equation for Vassett and Day. Equally crucial for these self-proclaimed “pretzel pushers” is customer service. They love meeting and interacting with their customers. “We treat people the way we like to be treated, and have so much gratitude for the niceness we’re getting in return," Day says. "I feel like in this past year alone, I’ve had more positive interactions than I could have ever imagined.”

With the Salted Knot's growth over the past year, the mode of operations has evolved. Too big for the home kitchen, the business moved to a commercial kitchen in Tempe, where the baking is done alongside other food-based businesses. Day and Vassett were also able to hire some part-time staff.

No more home pick-up, either: You can now find the couple at the Uptown Farmers Market and the Downtown Chandler Farmers Market on Saturdays and during Second Sundays on Mill. And starting February 28, you'll find Salted Knot pretzels at Air Guitar, a stylish convenience store that serves “luxury” food and drink items. The company also offers catering services.

A peek inside the Salted Knot kitchen reveals a hardworking crew and palpable happy vibes, with mutual respect and a lot of laughter. Day is even willing to do a little clogging in the kitchen for some fun social media promotion. The company's motto, after all, is “Good Pretzels for Good People," and the positive energy is as addictive as the scrumptious product.

Vassett and Day are committed to maintaining that spirit, though running a business is not without its challenges. “We have a lot to do,” Vassett acknowledges, “but if I’m staying up late figuring something out or stamping boxes, I’m doing it with a smile, because I’m just so happy.”

“For me, it offers a sense of accomplishment every day,” Day adds. “I’ve found that to be something I like and need. Whether it’s great and fun interactions on social media or talking to customers at the farmers’ markets, you get to see the fruits of the labor regularly, and that’s a big deal.”

Keep up with the Salted Knot at thesaltedknotaz.com.
KEEP PHOENIX NEW TIMES FREE... Since we started Phoenix New Times, it has been defined as the free, independent voice of Phoenix, and we'd like to keep it that way. With local media under siege, it's more important than ever for us to rally support behind funding our local journalism. You can help by participating in our "I Support" program, allowing us to keep offering readers access to our incisive coverage of local news, food and culture with no paywalls.
Make a one-time donation today for as little as $1.