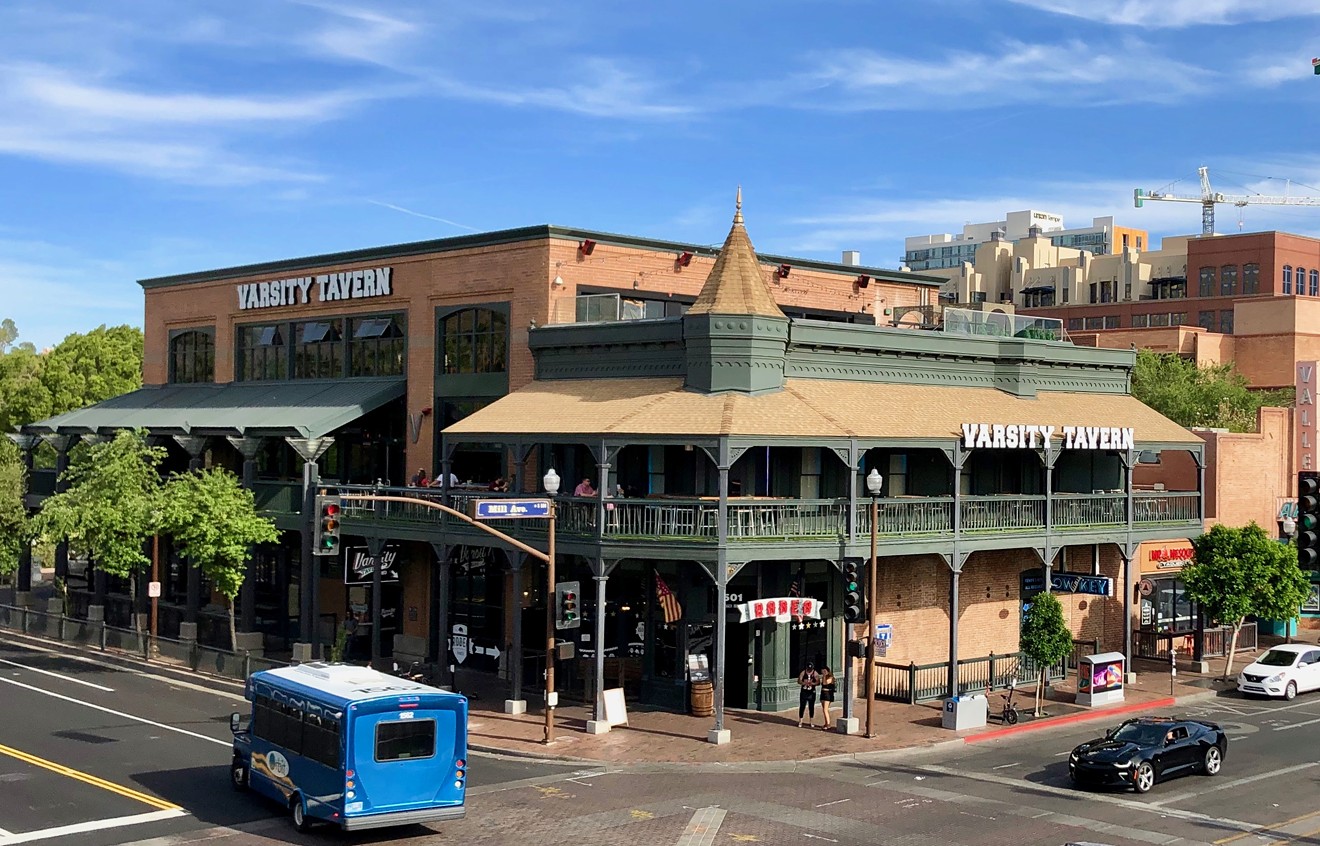 Varsity Tavern in downtown Tempe. Lauren Cusimano
Good news for fans of Varsity Tavern: It looks like the popular Tempe nightspot has reopened for business after closing for most of July. Ditto for its sister bars Rodeo Ranch and One One Bar.

The downtown Tempe establishments, which are located on separate floors of the Laird and Dines Building at Fifth Street and Mill Avenue, shut down on July 2 after Varsity Tavern's liquor license was suspended following the injury of a patron in June.

As of last weekend, all three bars, which are owned by Dallas-based hospitality company Reign Group, were open for business again. The Facebook pages for each bar touted nightlife events and dance parties that were happening on July 26. (Varsity Tavern hosted a dance party with DJ Shadez, for instance, while One One Bar featured a performance by techno DJ/producer Exos.)

According to the Arizona Department of Liquor Licenses and Control’s website, Varsity Tavern’s liquor license, which covers all three bars, has been reactivated.

The department indefinitely suspended the license after a Varsity Tavern patron broke his hip and elbow after falling from the bar’s balcony onto the sidewalk on June 29. (He either jumped or was pushed, according to conflicting sources.) The Tempe Police Department investigated the incident but reportedly found no wrongdoing.

Reign Group reportedly chose to close down Varsity Tavern, Rodeo Ranch, and One One Bar while the liquor license was suspended.

From all outward appearances, all three bars are only operating during weekend nights and have not resumed daytime hours.

Phoenix New Times reached out to both Reign Group and the Department of Liquor Licenses and Control for more information on the matter, but haven’t heard back as of this writing. Calls to Varsity Tavern have not been returned.

All three bars have nightlife events scheduled for this weekend, according to their Facebook pages. Varsity Tavern will have a Shark Week party on Friday, while One One Bar will host a local DJ night.
KEEP PHOENIX NEW TIMES FREE... Since we started Phoenix New Times, it has been defined as the free, independent voice of Phoenix, and we'd like to keep it that way. With local media under siege, it's more important than ever for us to rally support behind funding our local journalism. You can help by participating in our "I Support" program, allowing us to keep offering readers access to our incisive coverage of local news, food and culture with no paywalls.
Make a one-time donation today for as little as $1.