How Curator Tiffany Fairall Is Mixing It Up in Mesa Tiffany Fairall taking time to talk art in her new office. Lynn Trimble
Tiffany Fairall swung open the door to the men’s bathroom at Mesa Contemporary Arts Museum a few days ago, eager to show off a new art installation. The museum takes a summer hiatus each year to get ready for a new crop of fall exhibits, which means Fairall didn’t have to worry about museum visitors.

Instead, she was talking with Kristin Bauer about the concept behind the installation. It's designed to explore the difference between merely looking and truly seeing, and to call attention to glass ceilings in museum settings – for women and others who are marginalized.

“This museum has a long history of being run by women,” Fairall says. “We want to reframe areas of struggle as possible opportunities.” 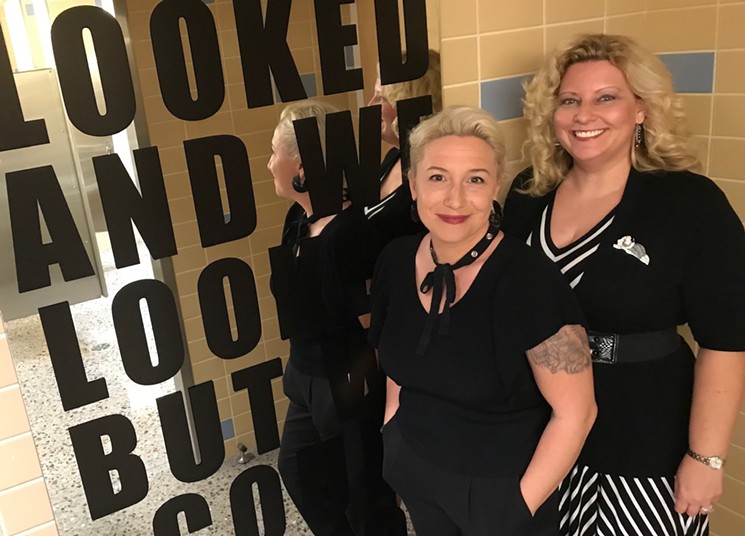 Kristin Bauer (left) and Tiffany Fairall, with work Bauer recently installed at the museum.
Lynn Trimble
Fairall has been part of the curatorial team since 2006, but lately, she's been settling into a new role. Fairall became the chief curator for Mesa Contemporary Arts Museum in March, following a national search to replace Patty Haberman, who retired earlier this year and now serves as chief curator emeritus for the museum.

Now, Fairall is the one driving the museum’s vision.

“We’re mixing it up a little bit,” she says. “We want to be socially conscious and tell stories of what’s happening in the social environment.”

The museum has been addressing societal issues for years.

Last year, it highlighted works by African-American artists, including Faith Ringgold, in exhibitions anchored around the theme of jazz – which referenced the struggle for civil rights that runs throughout the genre's history. A few years back, it showed artworks exploring culture.

Now, Fairall is working to expand the diversity of voices amplified by the museum.

“I really want to create a platform for people who are marginalized,” she says.

Next summer, the museum will focus on indigenous and Latino artists. That exhibition lineup already includes several Phoenix artists, including Thomas “Breeze” Marcus and the Fortoul Brothers.

“Most museums are Eurocentric,” Fairall says. “It’s important to do work that decolonizes those spaces.”

She’s also fascinated by lowbrow art, and eager to show more works by artists who create graffiti and tattoo art. Chief curator Tiffany Fairall inside a gallery at Mesa Contemporary Arts Museum.
Lynn Trimble
In 2017, the museum had a solo exhibition for Juxtapoz founder Robert Williams, a California artist credited with launching the lowbrow art movement. Recently, it had a solo exhibition for Shay Bredimus, who does both fine art and tattoo art. And the band Circa Survive did a small popup concert in a museum gallery featuring Esao Andrews, a California artist who was born and raised in Mesa.

Next fall, the museum will present exhibitions featuring the visionary art movement, whose works are often described as psychedelic. That lineup will include Alex Grey, an artist best known to many for creating album art for Tool.

Sitting at her desk inside the museum, Fairall is surrounded by evidence of her eclectic interests. There’s a floral settee that reminds her of Dutch paintings from the 18th century, small figurines collected during trips to see the Terracotta Warriors and Stonehenge, and postcards for art shows with myriad themes.

Born and raised in Phoenix, she didn’t set out to be a museum professional. She studied graphic design at ASU but caught the art bug after taking an art history class, so she has degrees in both fields. Before joining MCA Museum, Fairall served as a curatorial assistant and registrar for ASU Art Museum. As an art history student, she did summer internships with both Heard Museum and Phoenix Art Museum, two staples of the metro Phoenix arts scene.

Growing up in the Valley, she’s well-versed in local arts and culture.

In 2016, she was instrumental in bringing an exhibition of El Mac’s artwork to the museum. The artist grew up in Phoenix but now lives in California. That year, the museum also commissioned an El Mac mural for an exterior wall at the museum, which features the portrait of a woman who immigrated from Guatemala to Arizona.

“There’s so much local talent here,” she says.

Still, most people don’t think of Mesa as the place to go for art that tackles tough issues.

Fairall has a different perspective.

“Mesa is hipper than you think,” she says.

Flourish: The Art of Life on Earth, the free fall season-opening reception for Mesa Contemporary Arts Museum, 1 East Main Street in Mesa, is scheduled from 6 to 10 p.m. on Friday, September 13.
KEEP PHOENIX NEW TIMES FREE... Since we started Phoenix New Times, it has been defined as the free, independent voice of Phoenix, and we'd like to keep it that way. With local media under siege, it's more important than ever for us to rally support behind funding our local journalism. You can help by participating in our "I Support" program, allowing us to keep offering readers access to our incisive coverage of local news, food and culture with no paywalls.
Make a one-time donation today for as little as $1.