Why are pizzas in New York so insanely large? It's not like there's a lot of spare room in this crowded city. The typical Gotham City pie is so immense that even someone the size of the Statue of Liberty would have difficulty scarfing down more than a few slices.

But the real head-scratcher is why many of the pizzas found in the Valley are such dainty little numbers. This is the land of wide-open spaces, where tough-talking cowboys cuddle with rattlesnakes and keep company with scorpions. Yet here, thin crust rules, slices require just one hand, and many places top their pizzas with -- gasp! -- designer stuff like barbecue sauce, feta, goat cheese and shrimp.

When we're craving good, old-fashioned New York-style pie, we pick Pizzafarro's. There's nothing shy about these servings -- the 16-inch large is enough to feed a family of four. Pillowy-crusted slices are enormous. We can fold them for easier eating, but if we don't want delicious pizza oil dripping down our fronts, we're looking at using a knife and a fork.

Pizzafarro's doesn't believe in frou-frou, either. All our favorite toppings are there (even fresh anchovies), but the only nods to contemporary cuisine are artichokes and green chile.

Back up the SUV and fold down the seats. We're going to pick up a pie from Pizzafarro's.

At a time of night when other restaurants along Camelback's gourmet row have long since rolled up the kitchen, Barmouche sizzles with its first-rate, creative French cuisine. Midnight munchies include portobello lasagna with made-on-site mozzarella, ricotta, parmesan, goat cheese and spinach, an 18-ounce New York sirloin with choice of sides (Belgian frites and sweet-pea mashed potatoes are sublime) and a Scotch beef fall-apart steak in red wine gravy.

Even the sleepiest snacker will come wide awake with Barmouche's croque monsieur, combining hot ham, Gruyère cheese and Béchamel sauce in thick French bread. It's our pick, paired with a side of crisp, garden-fresh asparagus sautéed in butter.

Barmouche's restaurant is open until midnight seven days a week; the bar, which also serves food, remains open until 1 a.m.

You snooze, you lose.

This primo pie is not for wimps. The large pie (18 inches) is about two and a half inches thick, and weighs almost 20 pounds. The big and tall men among us may be able to wrestle the huge slice into their mouths, but the rest of us are forced to use utensils to avoid muscle strain in our elbows.

At Western, there's no skimping on toppings -- bubbly-crisp dough groans under the weight of barbecue chicken breast with pine nuts, or spinach, feta, olive, sun-dried tomato and pesto. The best seller is the Western Round-Up, with mushroom, pepperoni, salami, ham, peppers and onions (the meat is layered high and thin like a hoagie, then buried under a truckload of mozzarella).

And we like Western Pizza for its hours. It's not only open until 3 a.m. Thursdays through Saturdays (1 a.m. other days), it delivers until then, too. That's pretty macho.

After eating too many fair-to-middling versions of this Greek standard to remember, we were inclined to agree with Tina Turner when she sang. "We don't need another gyro."

Of course, that was before we discovered the Hellenic heroes served up at Super Gyros. A two-handed feast of Olympian proportions, the generous mound of pressed lamb and beef is so juicy, we actually forget there's a side container of wonderful yogurt dressing until we're halfway through.

But don't you make the same mistake: As the sauce succulently soaks into the hot pita bread, it lends a tangy kick to the feta-topped meat that's fit for the gods. Super Gyro? Don't myth it. 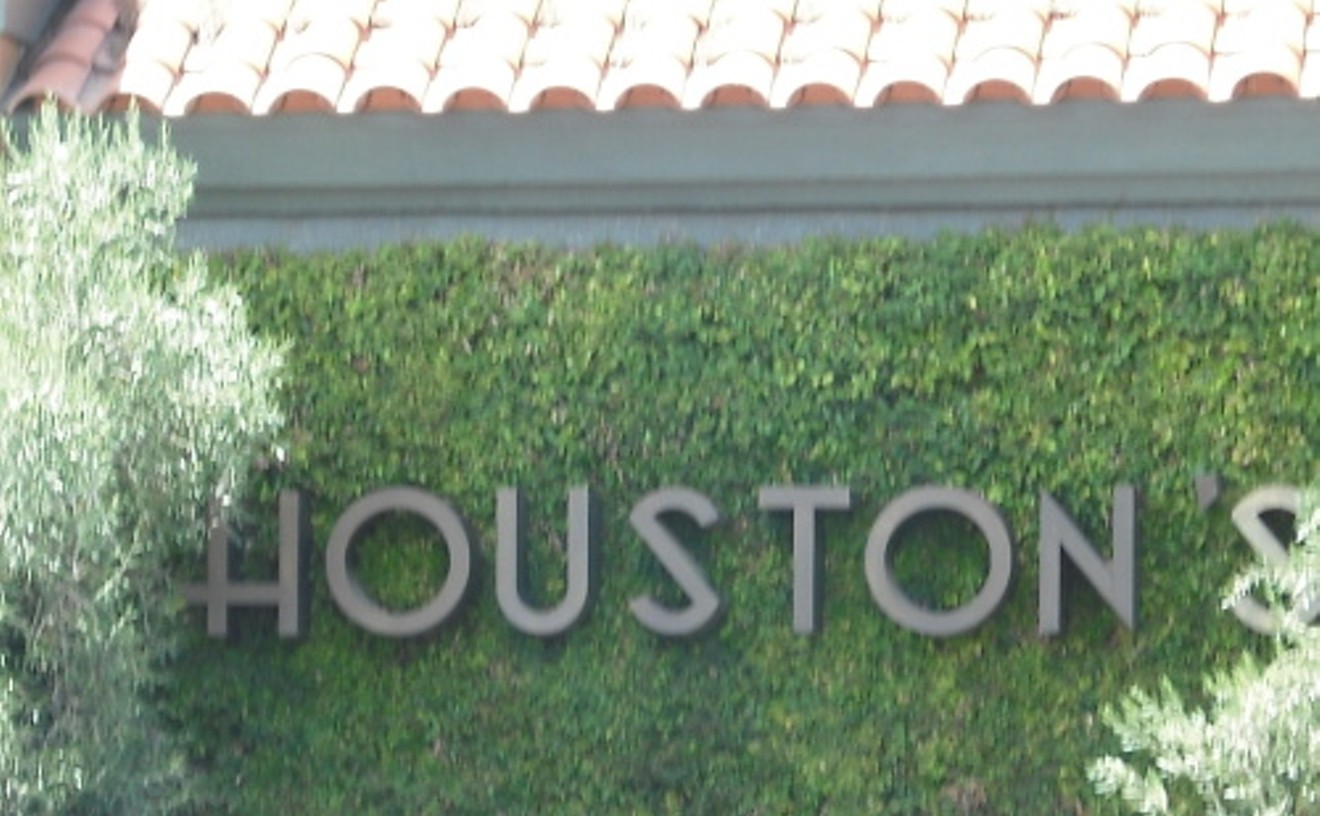 Last year, Houston's unceremoniously removed its signature smoked salmon appetizer from the menu for a trial period. The reaction from customers was not a pretty thing. Folks whined and ranted to the waiters. They e-mailed nasty-grams to the corporate powers that be. Some even threatened to boycott the restaurant. They mourned the loss of the silky, melt-in-your-mouth fish flesh Houston's elegantly pairs with toast points and a side of herbed mayo, a combo that, with a glass of good wine, makes a meal in itself.

Apparently, we weren't the only ones disappointed with Houston's wrong-headed marketing decision, so the salmon's back on the menu again in Phoenix. It's the best this side of Seattle.

Got a hankerin' for a real slice of sweet potato pie? Hightail it down to this cozy Cajun hole-in-the-wall where Chef Bubba Stephenson bakes a pie fit for Queen Ida herself.

Bubba lines a delicate homemade pie crust with a hearty, spicy filling made from fresh, not canned, sweet potatoes. Each generous slice (about a quarter of a pie) is served warm and slathered with plenty of whipped cream. After one bite, you'll feel as if you're back in the bayou. Sweet zydeco!

Mention "greens" in Scottsdale and most people will think you're talking about a golf course.

But that was before Marcella's opened for business, dishing out the verdant veggies that are a hallmark of any soul food menu. Kale, cabbage or collard, they're all prepared essentially the same way. Steamed with bacon or ham hocks until soft and tender, the leafy treats kick into high gear with the addition of garlic, and are then served in a steaming bowl of potent pot likker.

Forget chicken soup for the soul -- Marcella's greens will keep you in the pink. 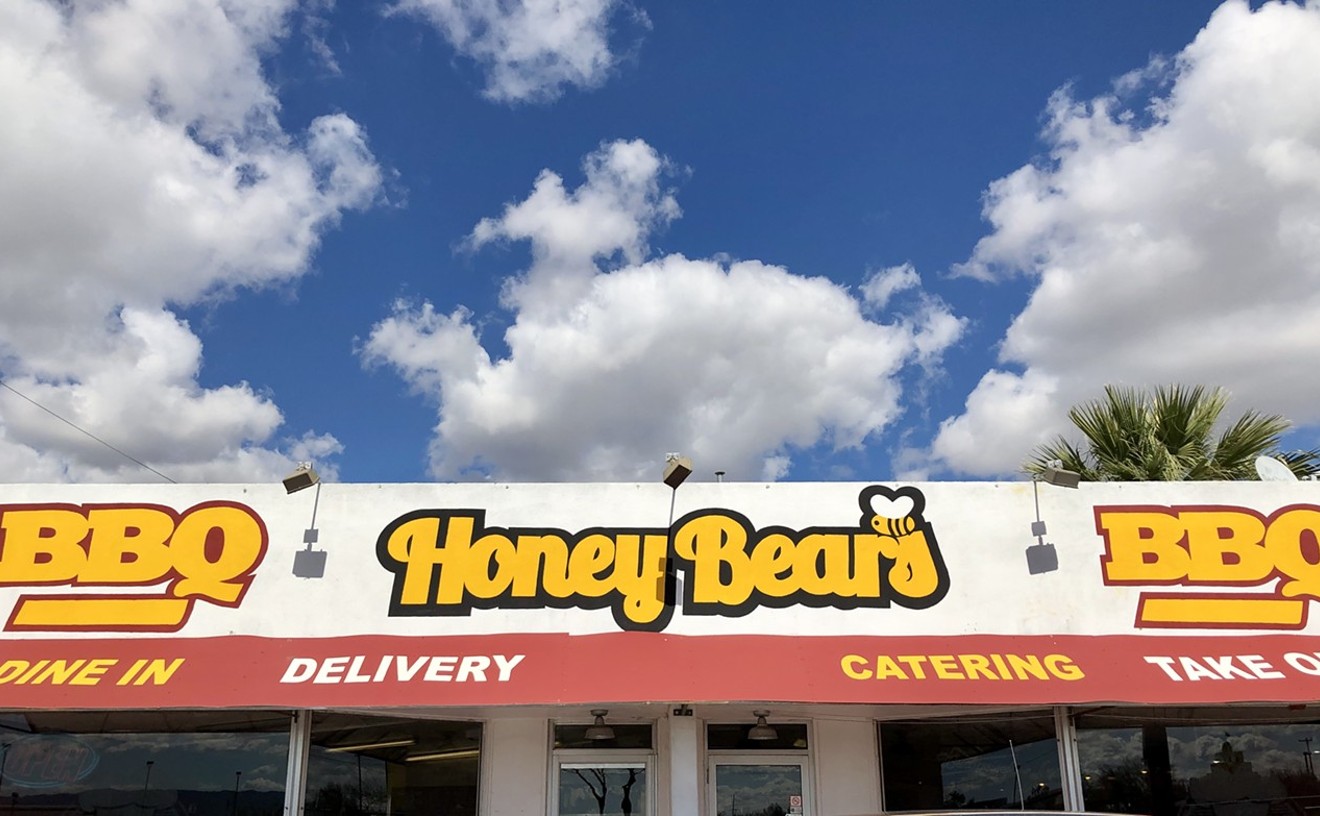 Lauren Cusimano
Honey Bear's owners Mark Smith and Gary Clark started cooking their mouth-watering barbecue out of their apartment almost two decades ago, based on recipes from their grandmother. Later, they moved to their dimly lighted, no-frills digs on Van Buren. A few years back, success led them to open a new location on Central Avenue.

Today, their Tennessee-style barbecue continues to draw in diners, lured by the smells of smoking meat and simmering sauces.

Their slogan: "You don't need no teeth to eat our meat." That's true. Pulled pork, beef and chicken positively collapse before we can gnaw them down. Pork ribs and whole or half-chickens slip from the bone. Hot links -- well, these take a tooth or two to snap their firm casing and get to the spicy sausage within.

Our honey of a meal is a large combo sandwich of pork and chicken. It's not on the menu, but always happily accommodated. The massive mound of meat comes tucked in a soft bun and wrapped in tin foil. The foil's important -- it seals in the heat, keeping the bun warm. Spicy sauce is served on the side.

It's a barbecue we could bear to eat every single day.

This is the Southwest. How could we not honor the region's unofficial steak-house side dish? Particularly when they're as seductive as the barbecue pit beauties served at Joe's?

Forget those canned baked beans of backyard weenie roasts of yore. This is a killer combination uniting kidney, lima and navy legumes thickened with shards of cooked-on-site sausage, chicken and beef. They're served blissfully hot, are inexplicably cheap, and are so very satisfying.

Bean there, done that? Not until you've tried Joe's.

Best Place for Coffee and Dessert Under the Stars 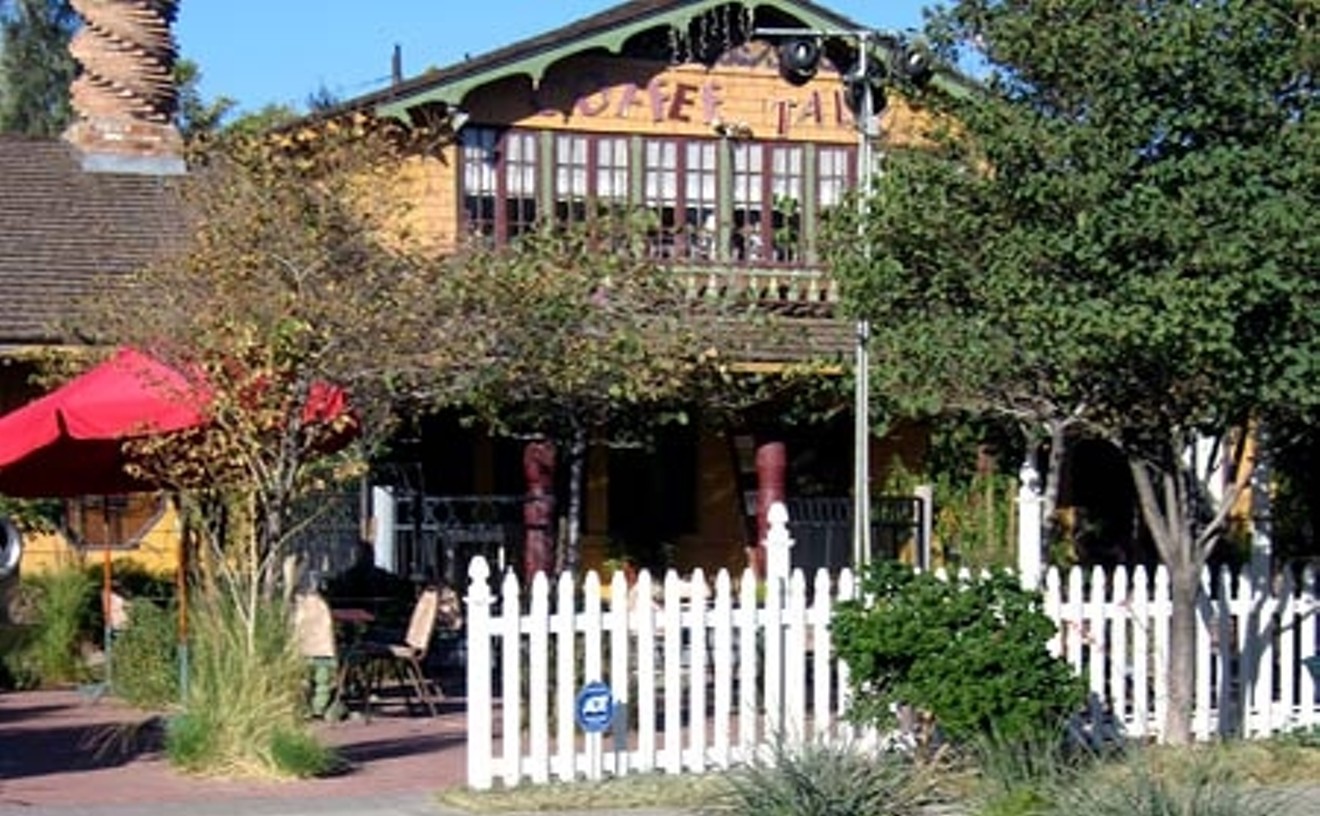 You can grab an after-dinner latte and biscotti just about anywhere these days. But you'll gladly drive past strip mall coffeeterias and shopping center java joints to relax in this charming little spot.

Located just north of Main Street in downtown Mesa, its sparkling white decorative lights will lure you in. A trellis, framed by fragrant vines and trees, leads you into the lush front yard of a restored turn-of-the-century home. Inside the Victorian-themed house, you will find the usual coffee and tea offerings, as well as homemade muffins, cakes, pies and other pastries. You can browse in the gift shop or enjoy the free entertainment -- singers, musicians and comedians.

But it's better to head outside. Whether you're in a large group or a party of two, there's a spot for you, on the porch or gazebo out front or beside a tinkling fountain among the backyard ficus trees. And as you banter over the biscotti, remember -- it's the coffee talking.