Best Place to Get Aroused While Waiting for Your Burro 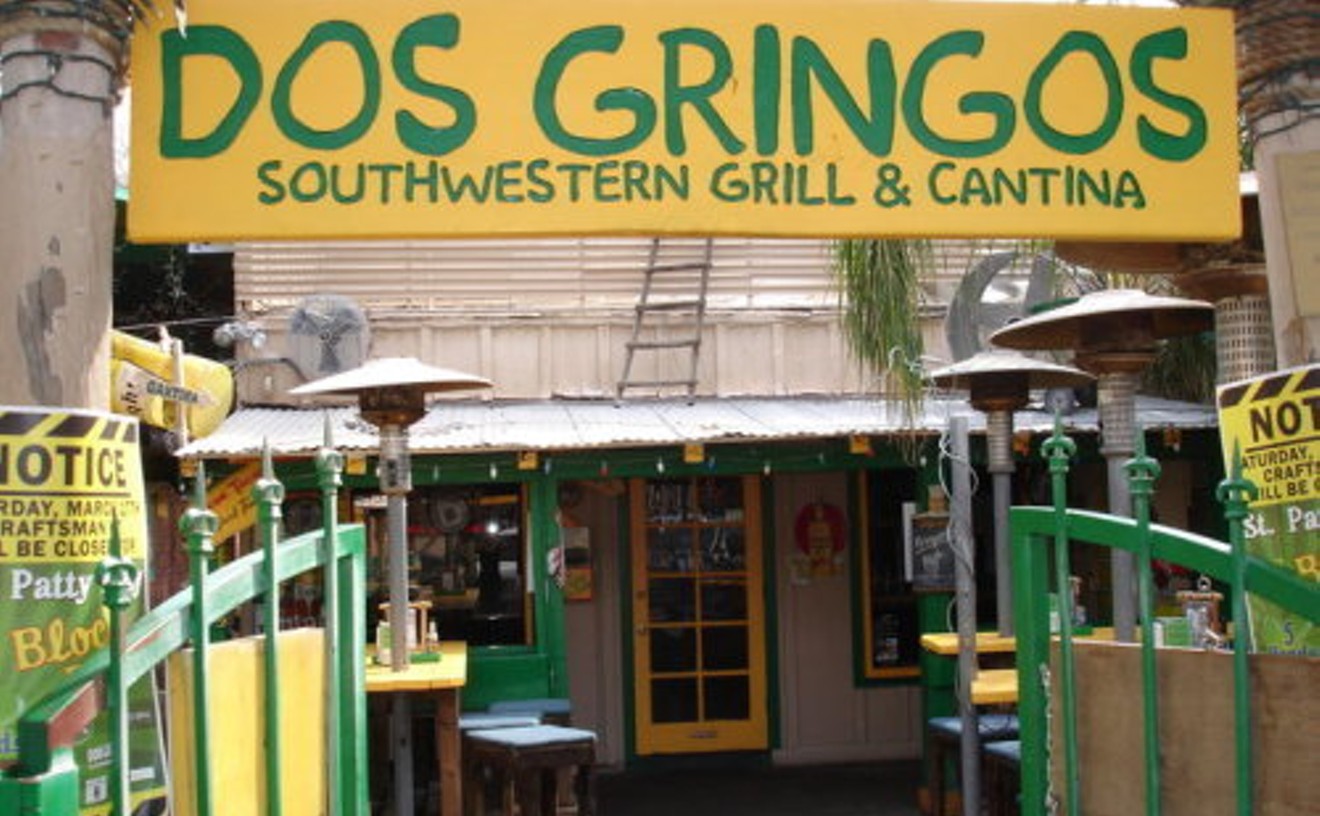 The consummate scene for Scottsdale's partypoids, this Rocky Point-themed taco joint offers several walls of shame with hundreds of patron photos. Many depict that most peculiar of modern mating rituals known as the Body Shot, which is always more about the body than the shot.

The bodies shown here belong to bronzed guys with "set clippers on two" haircuts and girls crammed into skimpy tube tops, the better to show off their sunless-tanning-cream glows. In Kodak moment after Kodak moment, the gals are seen lying on tables, their Victoria's Not-So-Secret pushed aside, while casting come-hither, "I'm soooo drunk" smiles at equally snockered frat boys sucking cheap tequila off their breasts.

Hey, somebody turn up Sugar Ray.

Looking for the best place in town to start the morning after? Then end your evening at Punky's after-hours breakfast bar, Phoenix night owls' noshery of choice. Open from midnight to 4 a.m. on Friday and Saturday, the all-you-can-eat $6.95 buffet offers a staggering array of tempting breakfast fare: eggs, bacon, sausage, pancakes, biscuits and gravy and hash browns.

The dimly lighted cafe offers more sophisticated ambiance than Denny's, and is the perfect place to slouch in a booth and chow down after a hard night of partying. Though the restaurant is also open during the week for traditional dining hours, Punky's shines brightest well after last call.

Best Place to Eat Burgers and Shoot Pool at Lunch 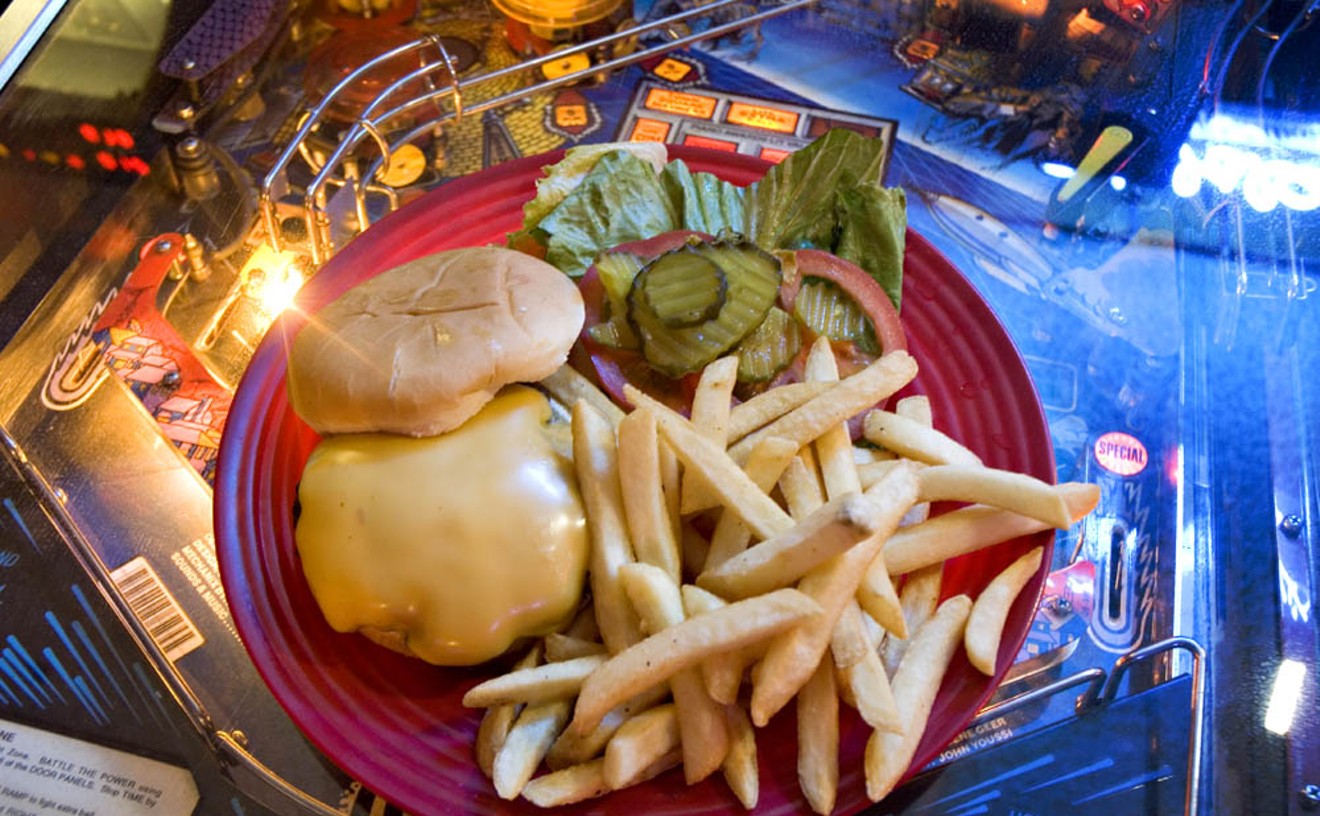 Jackie Mercandetti
Why go to a bar in the middle of the day when you can't down a few brews because you have to head back to work? At Harvey's, the burgers and a quick game of pool are reason enough.

Harvey's is small -- just a few booths, tables and a bar. Harvey's is dark -- most of the lighting comes from the glow of beer signs and a Twilight Zone pinball machine. Harvey's is run-down -- bare concrete floors, ratty walls and wires hanging from the ceiling. Harvey's is smoky -- neighborhood types crowd the bar, accustomed to popping their first brew at noon.

At Harvey's, there is a pair of pool tables off in a side room, where we can plop down a few bucks for a quick game. And between shots, we gorge ourselves on out-of-this-world wineburgers. The beef is flooded with Burgundy as it cooks on a special, extra-thick grill (to keep the wine from evaporating too fast), drenched four times, topped with cheese and drenched twice again.

So we go back to the office smelling of smoke and alcohol? Playing hooky at Harvey's makes us very, very happy.

The Desert Oasis makes a mockery of the term "starving student." This restaurant showcases the skills of students enrolled in Scottsdale Community College's Culinary Arts Program, and it offers complete five-course meals for a mind-boggling bargain of just $17.50 per diner.

So maybe the students aren't being treated to the multicourse feasts they prepare, but we'd bet there's a whole lot of tasting going on in the school's kitchen.

This is no cafeteria food. Faculty includes three full-time chefs and three part-time chefs. They take their work seriously, leading students through rigorous training on cooking, presentation and white-tablecloth service.

Hey, we're happy to help the kids with their homework. Especially when it means we get to gorge on dishes like mussels with mango citrus salsa, spinach vichyssoise, poached Seckel pears with prosciutto and wild rice, oriental petrale sole en papillote, daube of lamb, coffee cinnamon flan and pistachio citrus cheesecake.

The dog ate the homework? Hardly. It was us.

Best Place to Take Your Harley to Dinner

Harley-Davidson owners are a special breed. After spending multi-thousands to buy their bikes, and many thousands more customizing their wheels into nothing short of motorized art, it's understandable that they wouldn't want to be separated from their bicycle babies.

Even if it's more of a stripped-down warrior ride, a Harley becomes an extension of its owner on the road. Indeed, it's such a personal friend that most true Harley riders can pick out their bike while blindfolded, guided by their scooter's distinctive potato-potato-potato call. It's just as a mother knows her infant's cry from any other in the world.

The folks at The Hideaway know better than to come between such love. Open just two years, The Hideaway has become the place in town for serious bikers (and jealous gawkers) to gather. On weekend nights, in fact, it's often difficult to hear the piped-in Southern rock, the clicking of pool balls or your conversation with the always-friendly bartenders. That's because of the herd of thundering Harleys parked mere feet out the front door, cozied up like pampered pets to the railing of The Hideaway's wood plank porch.

The best seat in the bar is on this porch, sipping a good, honest pour, and snacking on country-style steaks, fish fry, burgers or sandwiches. Even if you're not lucky enough to own a bike, it's a kick to watch the blessed ones, cuddled up with their charges, caressing the chrome and planting baby kisses on the handlebars (grown men, no less).

Is it fancy? Are you kidding? It's a dirt parking lot, the bar dressed up with concrete floors and walls hung with posters of bra-busting bike rally queens.

Because there's no need for expensive decor -- all eyes are on the beautiful beasts parked outside.

Best Place to Get Sauced and Sloppy

Step up to the counter, order your choice of meat or poultry -- even prime rib and trout -- in whatever quantity you want. As Dusty's menu says, "by the pound or by the slice, how much you order determines the price."

The friendly gent behind the counter hacks off your selections with a glistening cleaver, weighs the meat and wraps it in white butcher paper. He tosses it on a tray with some buns -- plus lots of extra sauce, of course -- and sends you off to a checker-clothed picnic table.

Once settled, you assemble your sandwich or simply dig in. If you're craving sides, pluck beans, creamed corn, coleslaw, potato salad or macaroni salad from an iced-down watering trough near the cash registers.

Soon, you'll be groaning in delight at smoky, fall-off-the-bone baby backs, meticulously fat-trimmed prime rib and melt-in-your-mouth pulled pork. The excellent thin, peppery sauce gets on your face, your hands and usually all down the front of your shirt. But as long as most of it gets in your mouth, you won't be complaining.

Best Place to Have Dinner Pushed Through the Wall

Normally, having your meal slid through a small opening in the wall isn't a good thing. It reminds us of a brief time when we had a little, shall we say, less liberty than we do now. Of course, it was all a big misunderstanding, and as far as we know, our records were wiped clean years ago.

Still, there's a definite charm to the jailhouse-style food service, especially as it's practiced at Hart & Soul, a south Phoenix rib shack.

We know the routine well. Step up to the glassed-off ordering counter. Study a brief listing on the wall -- catfish, chicken, pork chops, maybe a barbecue special. Push a doorbell, and wait for a cook to slide open a tall, narrow security slot crossed with heavy black steel mesh. She takes our order, and the slot slams shut. When our food is ready, it's placed into a black kettle mounted in the wall -- the pot's back half is chopped off so that it spins like a revolving door to deliver our goodies.

Like a life sentence, Hart & Soul's initially daunting service will eventually grow on you. The food sure does -- our fave's a mighty fine fried catfish for less than $6, accompanied by two side dishes and a cornbread muffin.

Besides, this time we're on the right side of the wall. We get to walk away when we're done with dinner.

Best Place to Expect the Unexpected

How about top-quality, inexpensive Cuban chow?

Chary's is something special, situated unexpectedly in what's otherwise pretty much a culinary no man's land. From the lighthouse mural called Castillo del Morro La Habana Cuba that's painted on the west side of the building to the creative cooking dished out by owner Chary Castro, this is a treat on the downtown street.

Best Room With a View 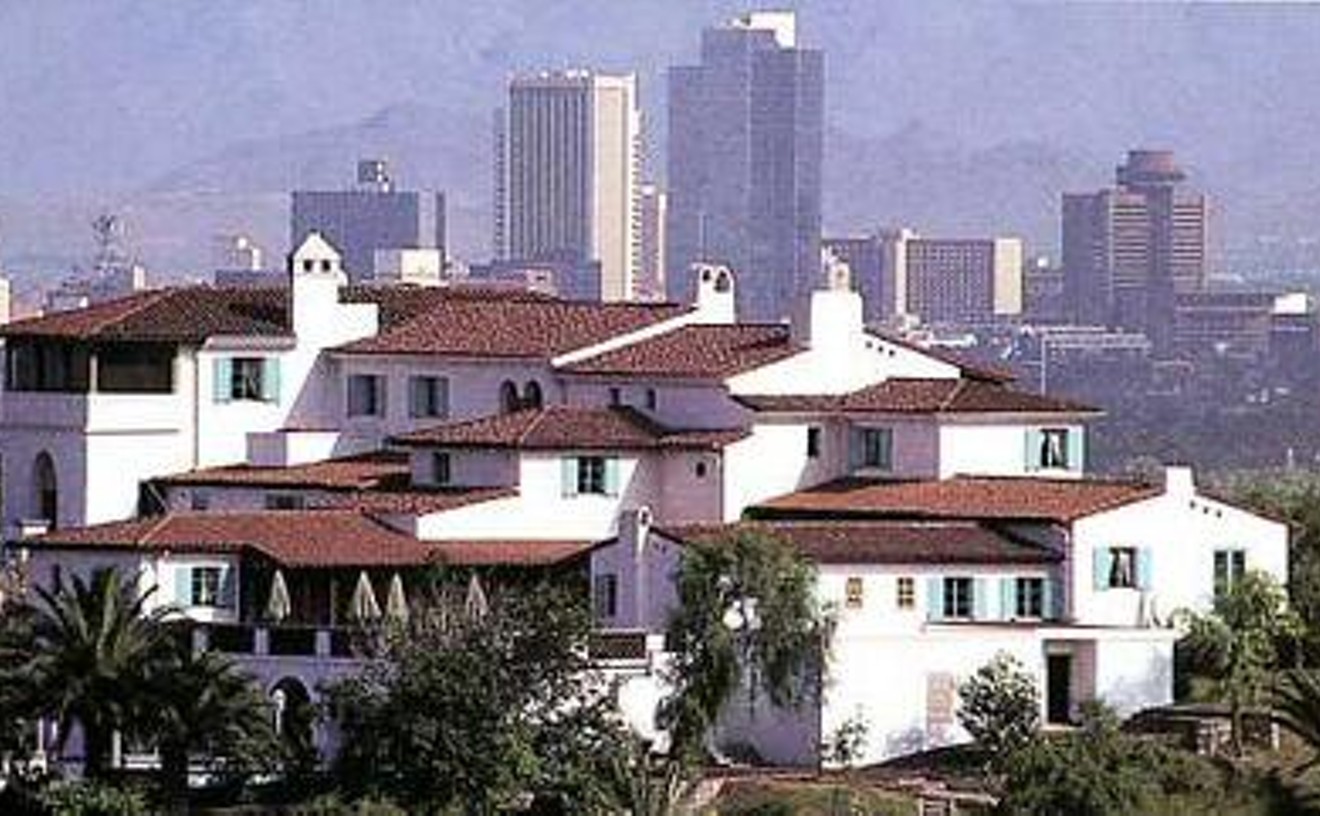 Must be nice to be rich. We've never gotten a 50th wedding anniversary gift like the one Ada Wrigley received from her husband, William, back in 1929. For his beloved bride, the chewing-gum magnate put a bow on a $1.2 million mansion, perched high atop a hill overlooking the Arizona Biltmore.

But we can pretend we're well-off, since current owner Geordie Hormel found a loophole in regulations that require the home be used as a private club only. Membership in Hormel's club costs only $10 a year (and he donates that to local charities).

Just as delicious, though, are the stunning views of this originally named "La Colina Solana" -- the sunny hill. We feel like old Ada must have felt when we dine, taking in the dramatic, 360-degree view of downtown Phoenix, Camelback Mountain, the Squaw Peak preserve and the Valley beyond.

Best Place to Eat If You're Starting a Diet Tomorrow

The choice of where to indulge in a final meal before bowing to Jenny Craig is simple: Mrs. White's.

The meal is chosen from a menu written on the wall, surrounded by celebrity graffiti. (The Phoenix Suns are said to love this place -- sure, they can work it off on the court.) When you're done, tell the friendly folks behind the counter what you had, and they'll ring you up. They trust you not to cheat.

Now, if you can only trust yourself not to cheat on your diet.