Best Place to Take a Foodie

Though not located in the crook of bustling downtown Phoenix or the reviving Melrose District, Cotton & Copper stands as a crown jewel of the dining destination that is the northeast corner of Rural and Warner roads. This 50-seat south Tempe restaurant and bar overseen by Chef Tamara Stanger serves New Arizona-style dishes and thoughtful cocktails. Food enthusiasts may be interested in knowing how many of the ingredients in Stanger's dishes are foraged from the surrounding Sonoran Desert. Heck, even the eatery's name ticks off two of Arizona's Five Cs. Aside from Cotton & Copper's progressive Arizonan cooking style, another draw is bartender Sean Traynor shaking up house cocktails in the saloon-style bar, including the must-try Agua Caliente.

Even through the fantastic river of high-end wine, beer, and sake that comes with the drink pairing, a meal at Binkley's is something you can see clearly in your memory long after the storied night goes down. Structured like a dinner party at a friend's, the meal begins on the patio for a few courses, moves into the bar room, and finishes in the cozy formal dining room. At any point during your meal, you can rise and wander around the bungalow where the magic steadily unfolds, the spell seamlessly cast by Kevin Binkley, Amy Binkley, and their highly capable staff. You can even go into the kitchen and watch the chefs cook, if you please. Binkley is an inspiring talent, plating the likes of micro lamb pastrami sliders, apples in chimichurri, Hokkaido scallops poached for 38 seconds, and a carnival of playful, perfectly executed small plates, some two dozen in all. A meal at Binkley's is like a trip to Willy Wonka's chocolate factory, but for adults who love food and appreciate living genius.

A lot of our Best of Phoenix categories are close calls. Not this one. Opened by Dom Ruggiero and Charles Barber in February, Hush Public House has been plating A-plus food since the very beginning. Barber has assembled a rock-solid drink program based on classic cocktails, and manages the front of the house with the bonhomie and familiarity of an old friend from college grown up and moved on to big things. Ruggiero has proven to a large audience what his followers already knew: He is a rare talent whose food overflows with heart and soul. On a nightly basis, he displays his mastery of plant and animal, land and sea, and giant, smoky, chile-driven flavor combinations as well as subtle balancing acts (pea, strawberry, salty cheese, pepper, olive oil). Just a half-year in, many dishes already feel like time-honored classics — oxtail "Italian beef" and chicken liver mousse most of all. The best thing about Hush is how young it is, and how great this already 10/10 restaurant could one day become.

Subash Yadav's food draws from both north India and Nepal, the countries of his parents, crossing the border as freely as his truck crosses the Valley. His most popular plate? The momo, a rarity in this part of the world. Yadav fills his Himalayan dumplings with chicken, beef, or vegetables. They are lavishly spiced with ginger, turmeric, and other warm flavorings. The sloping walls of these Nepali-style dumplings are thick and rich, and disclose hot, tender interiors, plus intense flavors lengthened by cilantro and chile sauce. Be sure you order these should you spot the blue-and-white truck, and be sure to round them out with Yadav's other memorable offerings, like mango lassi with cardamom and saffron. Yadav is just getting started. He's looking to expand his menu — and his momo styles.

In February, the two-day Devour Culinary Classic celebrated its 10th anniversary with a whirlwind of a weekend food festival. The Desert Botanical Garden continues to be the ideal setting for such a showcase of local food and drink, as attendees are able to weave through the garden's many sections and pathways, browsing vendors busy plating and pouring. Memorable offerings from the 2019 event included mega shrimp from Bourbon & Bones, wagyu brisket from Roka Akor, toasted head cheese from Welcome Diner, and jamon iberico ice cream from Talavera. Devour's complimentary wine glasses did not stay dry for long, especially when passing booths manned by Pillsbury Wine Company or The Shop Beer Company. Beloved chefs were also in the mix, including Silvana Salcido Esparza, Lori Hashimoto, and Christopher Gross. In addition, the weather was ideal — sunny and chilly, even for February. We're excited to see what organizers Kimber Lanning and Local First Arizona have in store for the 11th annual Devour Culinary Classic.

Many had high hopes for the first-ever Arizona Bao Fest, held on March 24 at Unexpected Art Gallery, so much so that people were lined up for samples of steamed buns, noodles, takoyaki, rice bowls, skewers, boba, and desserts from more than 10 local eateries. To stave off long waits, organizers implemented staggered admission, with half-hour entry times throughout the day. But lengthy delays ensued, as did sunburns. More than 3,000 people tried to attend, cramming into the parking lot on Polk Street. People complained on social media about the long lines, the lack of food, the number of actual bao vendors, the parking, the way tickets were presold, and so much more. However, we don't mean to be entirely bitchy. We sincerely mean it when we say better luck next year, because bao are the bomb. 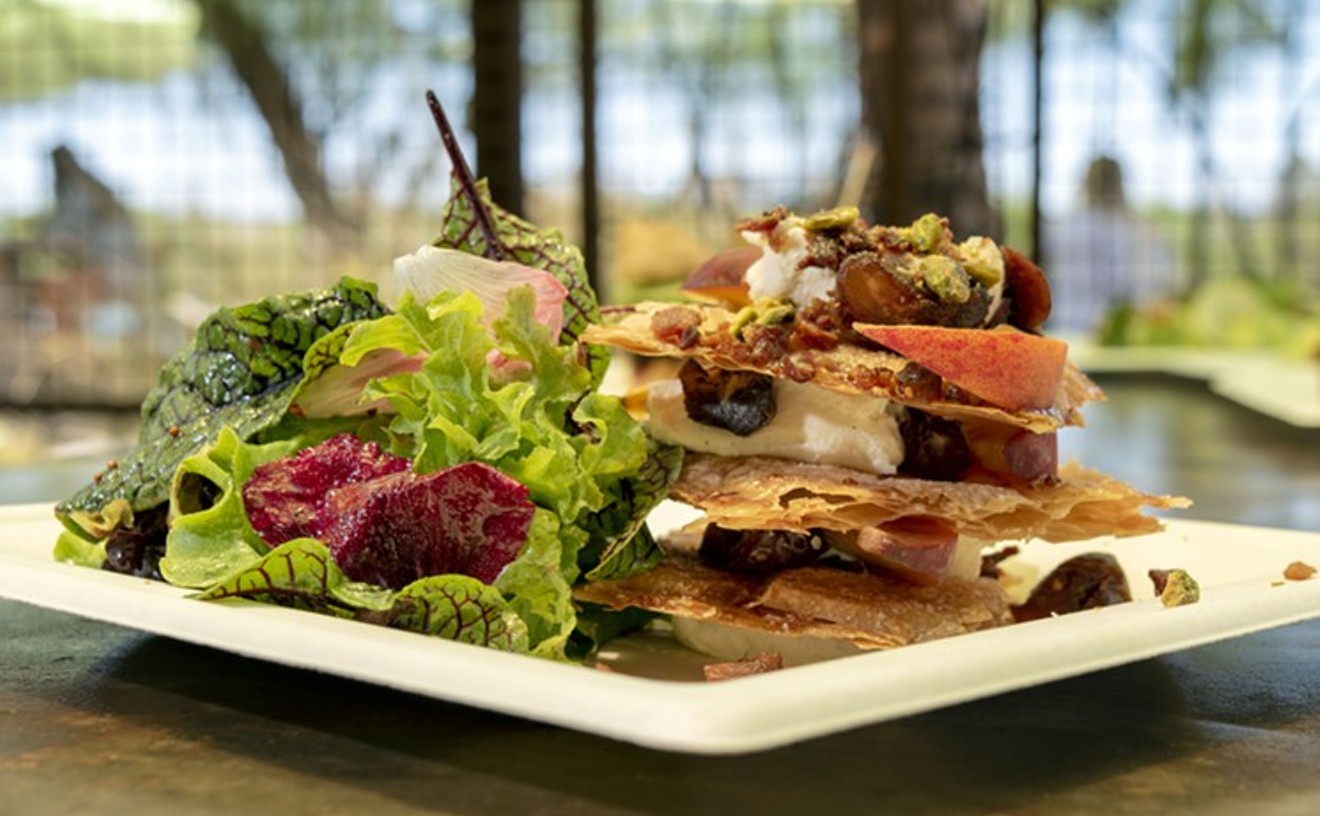 For a few seasons now, Sacha Levine has been translating the earth's bounty into some unforgettable food at Singh Meadows. She has used an orange blossom gastrique to sweeten a deconstructed Napoleon, teetering with layers of peak-season strawberries and whipped goat cheese. She fries herbaceous falafel for sandwiches, fritters charged with jalapeno, leeks, and green garlic. She imbues nuanced tang into a bowl of Anasazi, cranberry, and runner beans, the fine zap coming from pickled fennel and escabeche. Her menu rotates with the seasons like an out-of-control airport door. And that's a good thing, because if you've eaten at Singh Meadows even once since Levine took over, you know that you'll have to be back again in a few weeks, when half the menu has morphed into a new set of enchanting creations.

This year, we've tried our hardest to highlight how food waste is a big issue. And in the spirit of offering solutions along with problems, we've written about what regular folks can do — both at the restaurant and household level. Phoenicians may choose from a couple of new habits to reduce food waste, including smarter grocery shopping, practically ignoring expiration dates, and loving leftovers. These are all forms of waste diversion, and part of the Reimagine Phoenix initiative — a Phoenix Public Works Department program designed to increase the city's waste diversion rate to 40 percent by 2020, then, hopefully, to a big fat zero by 2050. The Reimagine Phoenix program hopes to do this through educational outreach on the five pillars of waste diversion (some of which may sound familiar) — reduce, reuse, recycle, reconsider, and reimagine.

You'd balk if your grandma told you she invented the apple pie or your cousin said he came up with the first bite of sushi. But Julio César Morales, curator of the Arizona State University Art Museum, takes his grandfather's accounts of helping to make the first Caesar salad, along with notorious gangster Al Capone and a chef at the Caesar's Hotel in Tijuana, Mexico, to heart. Family lore says the trio put the salad together one night during Prohibition, using what was left in a hotel restaurant kitchen after an onslaught of tourists practically wiped them out. He's visited the hotel, shared his family's oral history through art, and still makes the salad today for friends and family. Morales knows food lore can be tricky, but credits his grandfather's stories with helping to fuel his shared passion for art and culinary creations. Every family tale should be so inspiring. 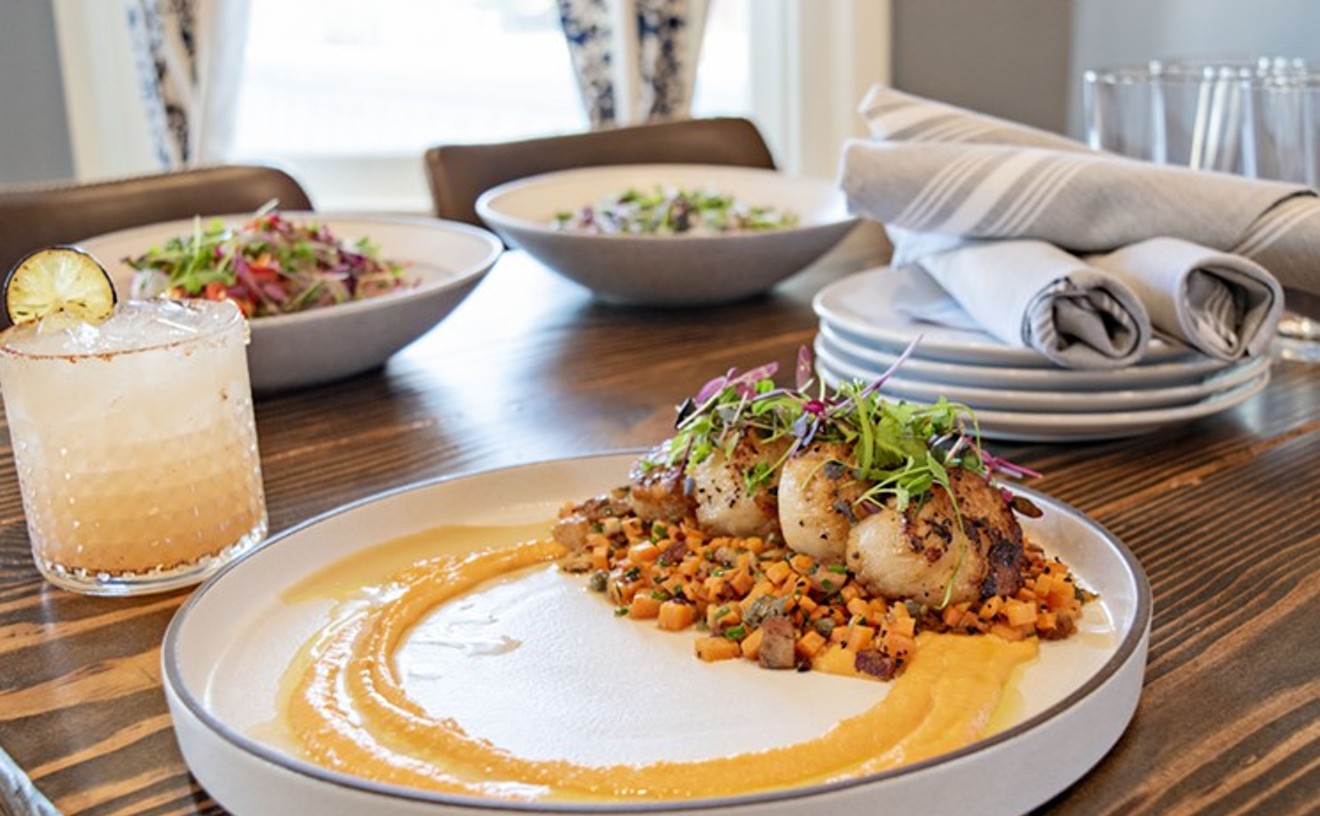 The old Rose & Crown building in Heritage Square recently morphed into Anhelo, a playful restaurant helmed by 28-year-old Chef Ivan Jacobo. Until he rewired the lighting and relaid the floors of this spot, refreshing the structure while preserving the old charm, Jacobo helmed a cult pop-up called Hidden Kitchen. The whimsical vibe of that bygone endeavor carries over to the space of the old building, made new by some of Jacobo's uncommon ideas. Giving to charity. Operating with almost no fridge space. Going way out of his way to compost. Plating a ceviche that features not marine life but cubes of watermelon. Coating Caesar salad in a blanket of cheese. Plating a cluster of scallops on one point of a sweet potato ring tracing the rim of the dish. And crafting some of the more surprising desserts you can find these days, like granitas and pavlovas with pickled strawberries, and a cold quenelle of salted caramel ice cream striped with honey surrounded with fixings to turn you into a kid again.