Call us particular, but we like it when meals are crafted to our exact specifications. Poke, the popular bowl-of-fish concept, gives us a custom dining experience every time. Our favorite place to have it our way is Koi Poke, an expanding local chain. Start with white rice, brown rice, or mixed greens, then choose from a wide selection of fresh seafood, such as spicy tuna, yellowtail, salmon, octopus, and our favorite, the marinated Hawaiian tuna. Add one of Koi's tasty sauces, and pile on toppings like cucumber, edamame, red onion, and kale, and you've got a healthy, delicious meal exactly the way you want it.

Forgive us, Lord, but there may be no better place in the Valley to be at 11 a.m. on a Sunday than Great Wall Cuisine, the best among a woefully small selection of dim sum spots in town. Inside this expansive west Phoenix establishment, servers cart around a seemingly endless supply of dumplings, steamed meat, and other Cantonese favorites. Steam rising from bamboo baskets and a cacophony of clanking dishes and Chinese chatter let you know you're in for the real deal. Expect to wait for a table, depending on the size of your party, but rest assured it'll be worth it. 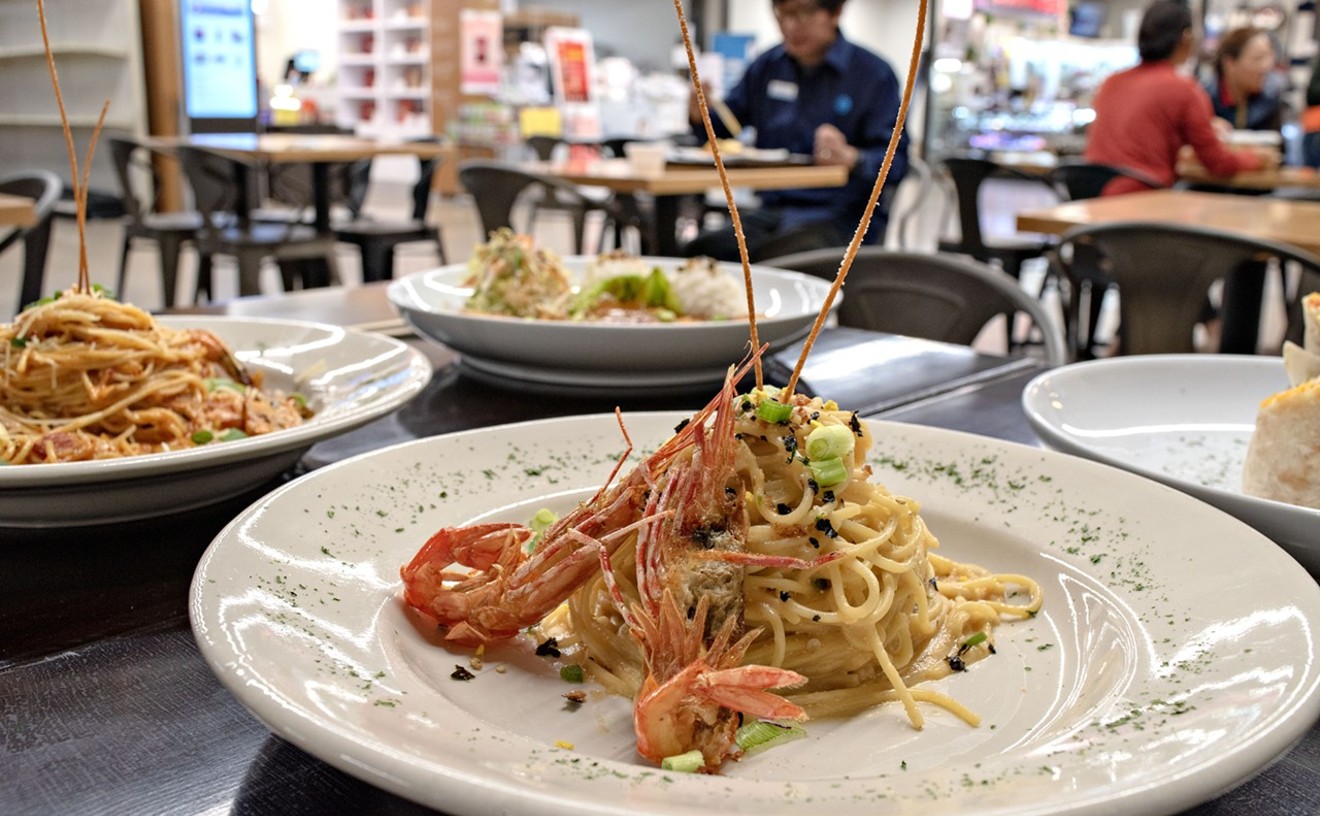 "Fusion" is like a four-letter word these days, but not at Katsu in Mesa's Asiana Market. Chef Danny Jeong spent time cooking in Italy and Los Angeles' Koreatown; he loops the two together in some astounding pastas. Creamy, velvety, dense, and edged with bacon's smoke and chile heat, kimchi pasta is a bowl of carbonara on vacation in Seoul. He also plates a wildly buttery and saline mentaiko pasta, a dish born in Japan, pollock roe clinging to every last strand of Italian spaghetti. Jeong plates a fine panko-sheathed katsu cutlet, a solid but mild rendition of the rice cake tteokbokki, and even a bursting bulgogi burrito. But the pasta dishes are what really kick open the door to your mind.

It seems like everyone we know these days is embracing a gluten-free or carb-free lifestyle. We support their decision, but we think baked goods are too wonderful to give up, especially the items we find at Lior the Baker. Make sure the place is open before you head to north Scottsdale to shop, because the hours are limited. But when you get there, you've got nothing but good options, from several varieties of challah bread to a rotating selection of desserts. If you can, pick up one of the shop's flat Moroccan breads, heavily spiced and baked on flat river stones. 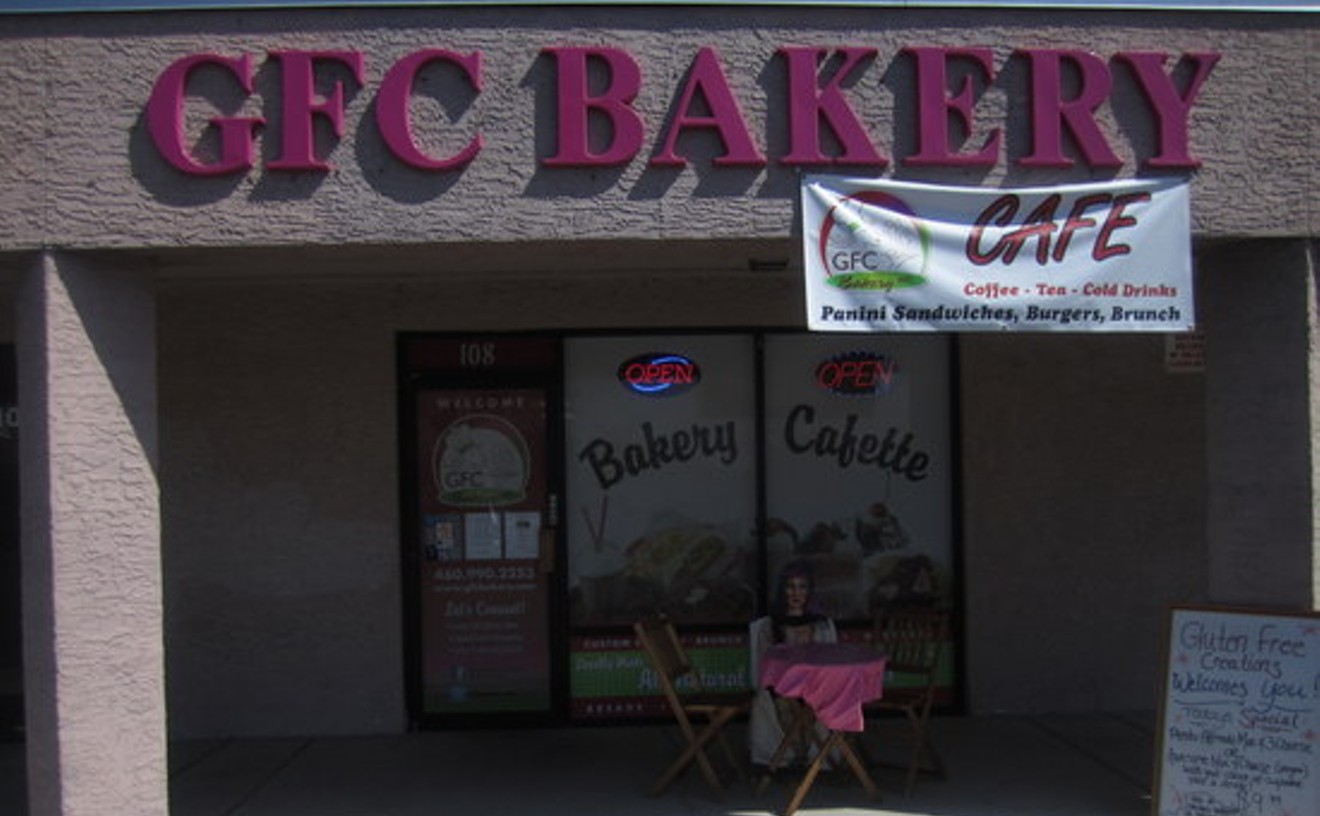 "Gluten-free baked goods" used to be an oxymoron, or at the very least, an unappetizing prospect. We're glad that's no longer true. Gluten-Free Creations is where we go to pick up treats that are both delicious and safe for our gluten-sensitive friends and family. There's plenty to choose from here, from cookies, cakes, and brownies to bagels, biscuits, and sandwich bread. We like the jalapeno cheese bagels, the snickerdoodles, and the triple-chocolate marble bundt cake. Both locations also serve a limited sit-down menu Wednesday through Saturday; think bagels with cream cheese, black bean burgers, grilled cheese sandwiches, and chicken strips.

Best Place to Eat and Be Scary

A combination gluten-free bakery/horror movie museum is not the most predictable mashup, but at Spooky's Swirls, it works. Open since July, Spooky's serves macabre and sci-fi-themed treats like "cereal killer" Fruity Pebbles marshmallow bars, mini mouse cheesecakes, and cupcakes topped with chocolates that look like Han Solo encased in carbonite. Before or after you order, feel free to browse the rotating selection of movie memorabilia from the Horror & SciFi Prop Preservation Association. On a recent visit, we saw a stunt machete from a Friday the 13th movie, toiletries from the Bates Motel TV show, and a Gizmo from Gremlins 2: The New Batch. Movies play on a flatscreen TV, and there are old issues of Fangoria and Starlog to peruse while you eat your gluten-free treats.

Everyone loves a good comeback story, and Nino McCurley's tale is as good as it gets. In 2010, the Valley resident broke his back while working as a local firefighter and lost his job. Four years later, a distracted driver plowed into his motorcycle, landing him in a wheelchair for 28 weeks and requiring him to learn how to walk again. Frustrated and destitute, McCurley started hustling to survive, first by selling his paintings at local art shows. Then, his cousin showed him "crazy-ass YouTube videos" of rolled ice cream being made by street-food carts in Thailand, which inspired McCurley. "I was like, 'I don't know what the fuck that is, but I'm gonna do it. I'm gonna be the best at it and bring it to Phoenix,'" McCurley says. He did just that. He bought the equipment, taught himself how to make the Thai-style frozen dessert, and debuted his food cart, Nomadic Ice Cream Rolls, in 2015. It was a big hit, leading McCurley to open a brick-and-mortar location in downtown Glendale in 2017. In July 2018, he transformed the spot next door into Lemoncade, a combination lemonade stand, art space, and retro arcade. Because that's just how he rolls.

Nathas Kraus, a baker without a bakery, sells a dazzling array of classically French pastries a few days a week at farmers markets such as Gilbert and Uptown. Though his cream-flavored "rhino" croissants and butter-saturated kouign-amann are showstopping, his simple breads are quietly excellent. If you get to his stand before everything sells out (hint: get there early and prepare to wait in line even then), be sure to walk away with La Parisienne. This long, lancing loaf is naturally leavened. It cuts into rounds or larger swaths (perfect for cheese) with a compact, crackly, almost hard shell and a light interior. This is Old World bread baked with skill and sweat, the kind of loaf that inspires trans-Atlantic trips.

Look hard enough, and a good bagel will turn up — even in Arizona, the land of bad water. Bagel-making is an art form and a really good spot comes along rarely, but Bagel Man is that spot. Found in the center of Ahwatukee near the Warner-Elliot circle, Bagel Man truly must have something in the water for its dough to turn out as tasty as it does. Plain, everything, salt — Bagel Man has it all. Order with cream cheese, and it's generously spread edge to edge. Order with nova lox, and each bite will taste of fresh smoked salmon on a pillowy piece of dough that doesn't need to be toasted; it's always ready to eat. Be prepared to wait in line on the weekends and maybe even on a random morning midweek, but you won't find anything better for miles and miles.

The Village Coffee and Crêperie

Almost good as this place itself was discovering it. What began as a Sunday lark for a short road trip in the northern reaches of the Valley turned into a treasure hunt we didn't realize we were on. There we were, a carful of hungry travelers, cruising through the boulders and nice homes of Carefree and Cave Creek, when we pulled into a town square-style shopping center off Cave Creek Road for an early lunch and found the Village Coffee and Crêperie. We could tell the place was special right off from the large menu of crepes written on a blackboard. We ordered the pesto crepe, a fruit bowl, the "original" breakfast crepe (scrambled eggs, red peppers, and other good stuff), and a Bumble Bee crepe with bananas and Nutella to share, plus a couple of espresso drinks. Russian immigrant Marina Matatov runs the place, and her grandmother shared some of the crepe recipes now served at the shop. We may not try all of them, but sampling more of these crepes is well worth the travel time.