5 of the Craziest Bloody Marys in Metro Phoenix 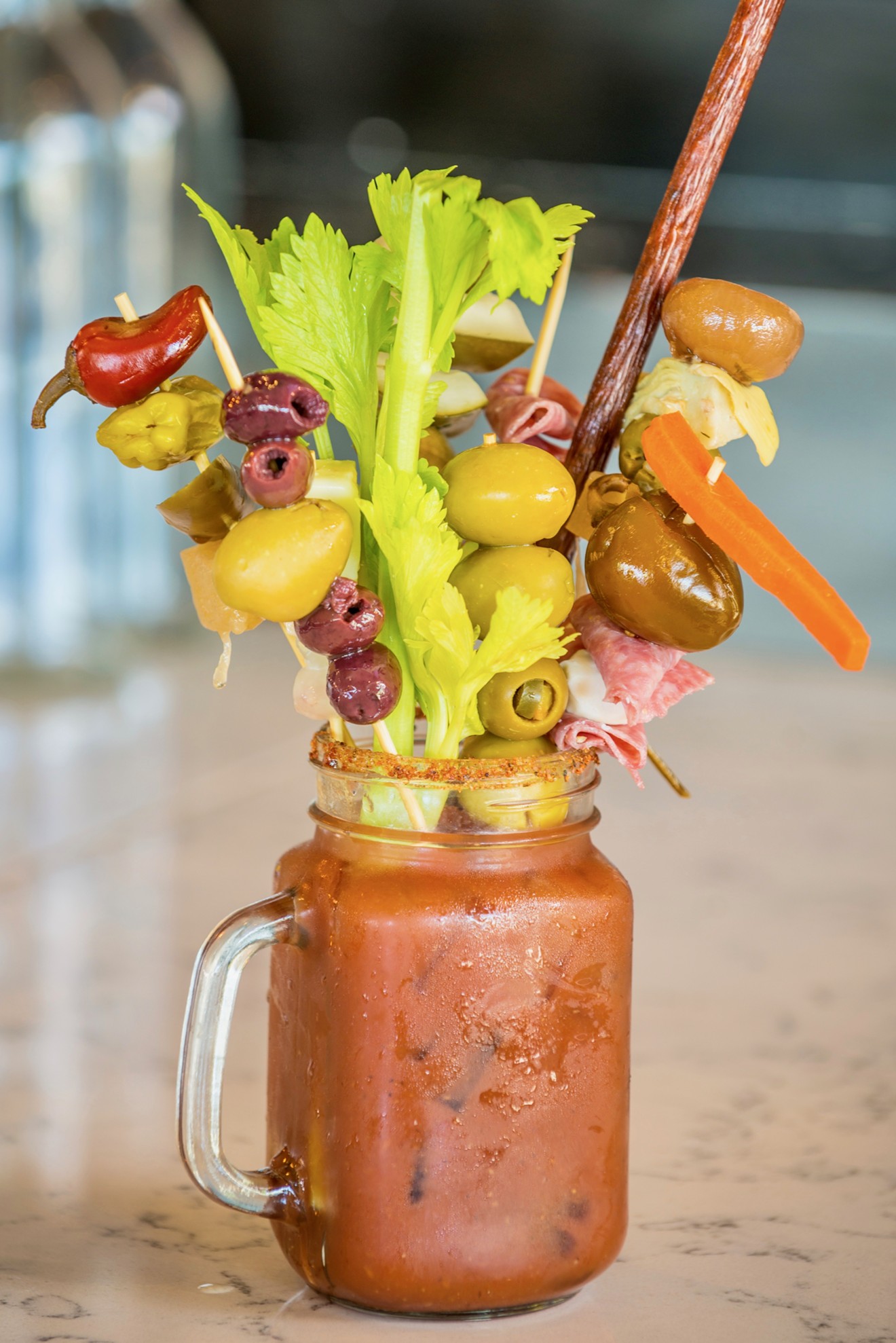 A crazy Bloody Mary? Here's where to find them in the Valley – including this one from Hash Kitchen. Tony Marinella
Aside from the salty, spicy, furiously red mix of a good Bloody Mary, the best thing about the a.m. cocktails may be the insane toppings some bars and restaurants will use to crown them. It’s almost a sport for some places to load bloodies with as many items as they can. Bloody Marys have gotten next-level. From Mexican street corn and deviled eggs to sticks of beef jerky and even a brownie on top, here are five of the more imaginative, over-the-top Bloody Marys in metro Phoenix. 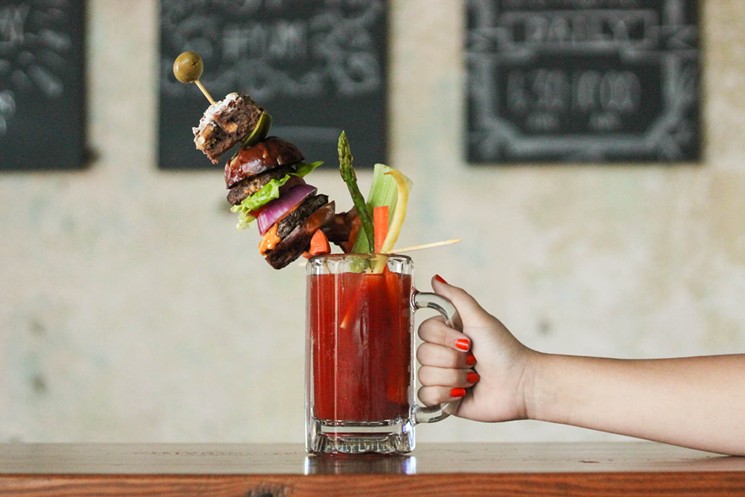 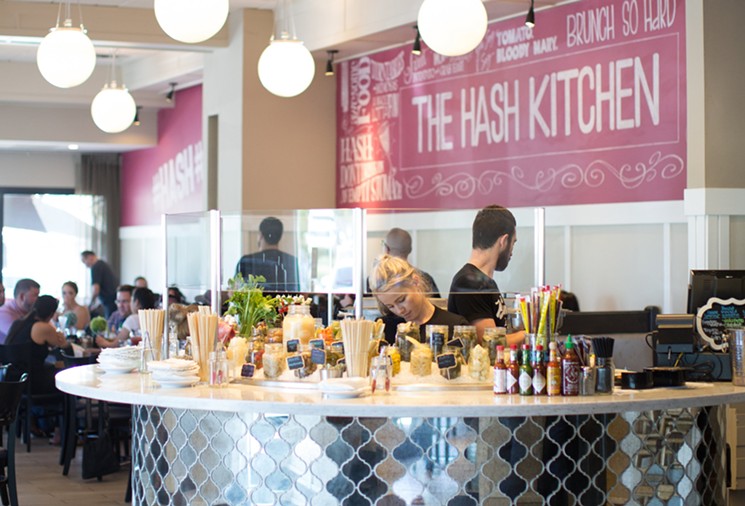 Take your time at the BYOB Bar at Hash Kitchen, as there are like, 40 ingredients.
Hash Kitchen
Hash Kitchen
Multiple Locations
An imaginative breakfast eatery and bar, Hash Kitchen is known for its zany brunch menu and – why we’re all here – its Build Your Own Bloody Mary bar. The BYOBM bar has more than 40 toppings for participants to mix and match and create the wildest Bloody Mary they can for $12. In addition to your vodka and house Mary mix, you can also add pickled mushrooms, pickled eggs, cherry tomatoes, mozzarella balls, your classic leafy celery stalk, and much more. Just get ready to wait for such a treat, or a table. 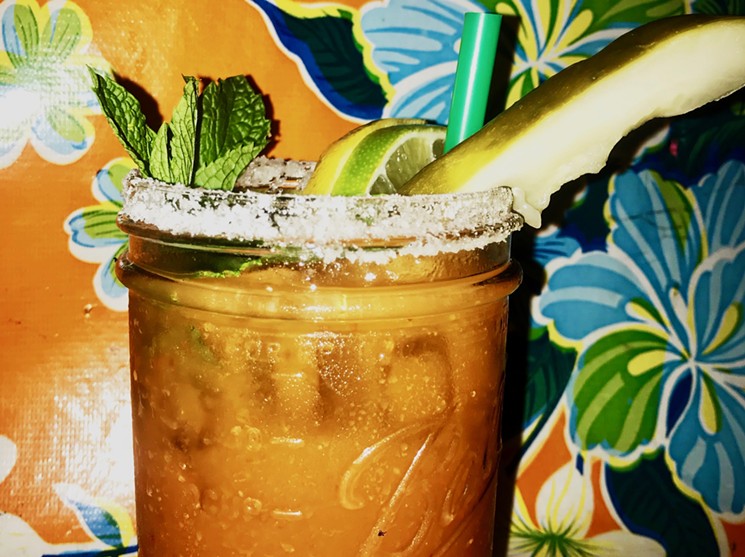 The Bloody Mary 1934 at The Duce is a beautiful thing to sip.
Courtesy of The Duce
The Duce
525 South Central Avenue
Everyone’s favorite wrestling-ring-turned-night-lounge has one mean cocktail menu. And of course, there's a Bloody Mary to be had. The Bloody Mary 1934 blends Prairie Organic Vodka with local homemade Bloody Mary mix, fresh-squeezed lime and lemon juice, and olives, and maybe even a pickle or mint. Enjoy your Bloody in the signature mason jar served with all cocktails at this unique spot. 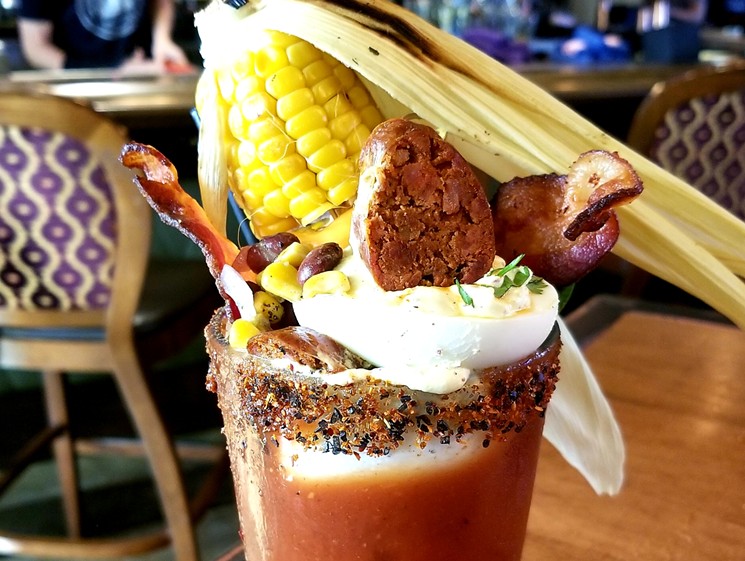 They get pretty inventive at Taco Guild with the Holy Mother Mary.
Taco Guild
Taco Guild
546 East Osborn Road
There might be no better place to enjoy an extremely imaginative Bloody Mary than within the historic walls of Taco Guild. The Holy Mother Mary is made with Tito’s vodka and pequin-pepper-infused Bloody Mary mix. Plus, this version is topped with Mexican street corn, deviled eggs, jalapeño-infused bacon, and longaniza sausage. This Mary goes south of the border, and we're happy for that.

Windsor
5223 North Central Avenue
Since its debut in 2012, the Bloody Mary bar at Windsor has been a smash hit. Start with the $5 traditional Bloody Mary with tomatoes, roasted vegetables, Fresno chiles, and fresh horseradish. The Sunday Bloody Sunday cart allows anyone to wander up and adorn their cocktail with a selection of spices, salts, pickles, and garnishes from the cart. The only thing better than a Bloody Mary bar is one that moves to you.
KEEP PHOENIX NEW TIMES FREE... Since we started Phoenix New Times, it has been defined as the free, independent voice of Phoenix, and we'd like to keep it that way. With local media under siege, it's more important than ever for us to rally support behind funding our local journalism. You can help by participating in our "I Support" program, allowing us to keep offering readers access to our incisive coverage of local news, food and culture with no paywalls.
Make a one-time donation today for as little as $1.