The design at Valentine is midcentury modern meets desert chic. Allison Young
Driving north on Seventh Avenue in midtown Phoenix, you'll notice a patio lined with terracotta planters and patrons lounging on tan upholstered chairs at tables lined up on the black asphalt. They sip lattes and nosh on southwestern fare like churro waffles and hush puppies made of corn meal at Valentine, a coffee, brunch, and dinner restaurant in the quirky and colorful Melrose District.

Esquire just named the popular spot one of the year's best new restaurants in America. In the list's 40th edition, the magazine celebrates 40 new eateries all over the country — and Valentine ranks at number 17.

"Valentine, an all-day restaurant in a former dry cleaners in Phoenix, is the closest thing the Grand Canyon State might get to a love song, but it’s a sweet one indeed. Its chef, Donald Hawk, turns out a menu as electric as the sun setting over Camelback Mountain, all while celebrating the vast horizon of southwestern cuisine," the article reads. 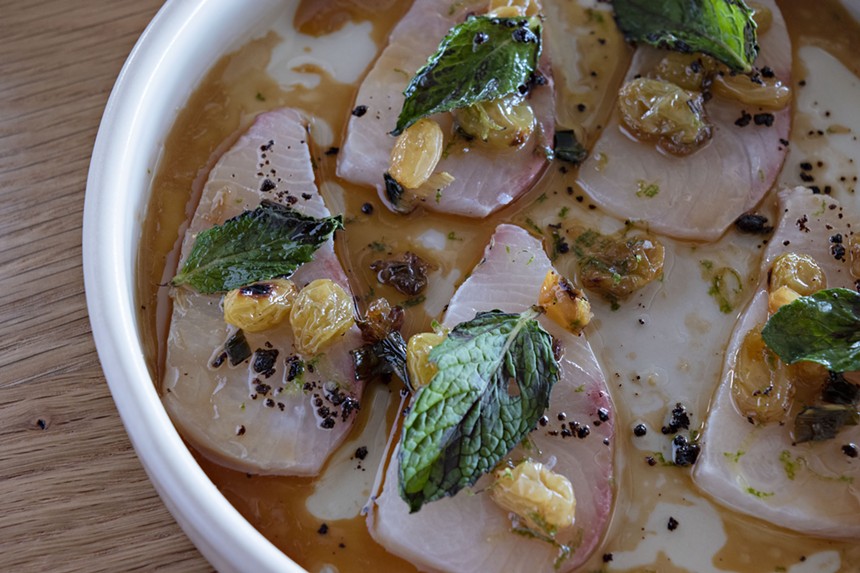 The Hiramasa crudo at Valentine.
Jackie Mercandetti Photo
It's an alluring and accurate way to describe the restaurant, which opened in December 2020. New Times subsequently named it Phoenix's best new restaurant in 2021. Valentine's appeal is perplexing to pinpoint exactly. Whether it's the midcentury-modern-meets-Southwest design, the native seeds that top its tater tots, or the boozy cocktails that accompany dishes like Elote Pasta, a swirl of house-made tagliarini, a silky, thinner version of its sister, tagliatelle. The crispy corn and dusting of arbol chiles are the cherries on top.The serving plates are another ode to the restaurant: modern, yet not overly fussy, beckoning guests to come as they are.

Among a burgeoning culinary culture in the Valley, Valentine is an iteration of Arizona all its own. The restaurant sits inside a building that also houses Modern Manor, a swanky vintage furniture dealer. The classic charm can be felt throughout the space. 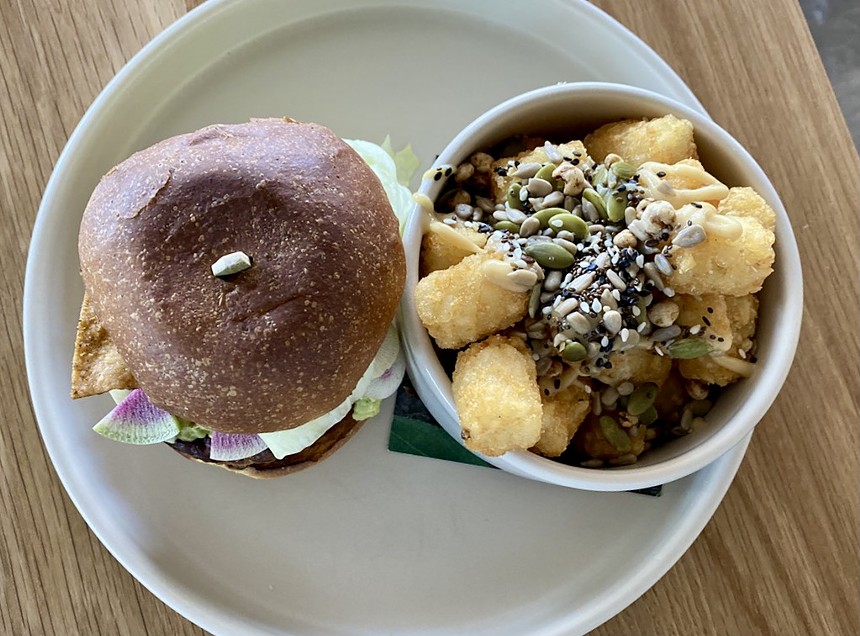 The Veg Burger is made with tepary beans and tempeh and served on a squash bun with tots on the side.
Natasha Yee
During the day, hipsters and remote workers type away on laptops while sitting atop leather swivel chairs and nibbling on Medjool date-filled sticky buns and flaky croissants that look too pretty to eat.

The space transforms into an elevated, candle-lit dining room by night.  And the cocktails could glean their own write-up. The Hatch Chili Margarita is made with mezcal, green chile vodka, and yuzu. It is at once spicy, smokey, and tangy. The espresso martini is filled to the brim with a mixture that includes house-made coffee liqueur. It's frothy on top, with just the right amount of caffeine to keep the evening going. Be sure to take a sip before you pick it up for your requisite Instagram post, because this one is worthy of the grid.

Reservations may be a bit harder to snag after Esquire's attention. But, if nothing else, coffee and pastries are first come, first served every morning beginning at 7 a.m. No advance plans needed.

4130 North Seventh Avenue
602-612-2961
valentinephx.com
KEEP PHOENIX NEW TIMES FREE... Since we started Phoenix New Times, it has been defined as the free, independent voice of Phoenix, and we'd like to keep it that way. With local media under siege, it's more important than ever for us to rally support behind funding our local journalism. You can help by participating in our "I Support" program, allowing us to keep offering readers access to our incisive coverage of local news, food and culture with no paywalls.
Make a one-time donation today for as little as $1.