A selection of dishes at Lom Wong in downtown Phoenix. Natasha Yee
When a new spot opens in town, we're eager to check it out, let you know our initial impressions, share a few photos, and dish about some menu items. First Taste, as the name implies, is not a full-blown review, but instead, a peek inside restaurants that have just opened — an occasion to sample a few items and satisfy curiosities (both yours and ours).

One of downtown Phoenix's buzziest new restaurants makes itself at home in a familiar black-painted bungalow on Second and Portland Streets.

What was once Peter Kasperski's fine dining restaurant Character and True North Studio's Josephine before that, both open for less than a year, is now Lom Wong.

The Thai restaurant debuted in March, serving the regional cuisines of its motherland from a cozy space with exposed brick and mustard velvet curtains. A smiling hostess greets customers as they enter the restaurant. Thankfully, cocktails came soon after, and the boozy concoctions made the balmy night a bit more bearable. The Thunder's Pina Colada is airy and light, made with rum and coconut cream. A dash of fish sauce is added for a savory finish, and the Eleven Tigers, a smoky bourbon cocktail with Campari, grenadine, and ya dong, a Thai sugarcane spirit infused with herbs, proved to be excellent selections. The Eleven Tigers, a smoky bourbon cocktail, and Thunder's Pina Colada which has a savory fish sauce finish.
Natasha Yee
Lom Wong's owners Yotaka "Sunny" Martin and Alex Martin have plenty of experience with Thai flavors. Yotaka grew up in a village in northern Thailand's Chiang Rai, planting herb and rice gardens and raising animals, then cooking them alongside her mother and grandmother.

Alex lived in Thailand for 12 years, learning to speak the language fluently while working in academia.

"In the most unromantic thing you can possibly explain while living in Thailand, of all the ways to meet, we met at a Starbucks," Alex says.

However, their adventurous spirits bonded and they were soon inseparable, traveling around different parts of the Chiang Mai province and hanging out in the kitchen with Yotaka's family in northern Thailand.

When Alex's dad convinced Yotaka to come stateside, the couple moved to Washington, hosting Thai barbecue pop-ups from their backyard. They eventually relocated to Phoenix, plans for Lom Wong in hand, and hosted their first pop-up here in June 2019. It's worth making a reservation at the new restaurant.
Natasha Yee
Now served at their brick and mortar restaurant, the menu is decidedly more unusual than those of the 1919-built bungalow's predecessors. Find Som Tum Gai Yaang, a green papaya salad with charcoal-grilled chicken thigh, and Tom Yum Haend Sen Yai, stir-fried wide rice noodles with straw mushrooms and head-on langoustine. 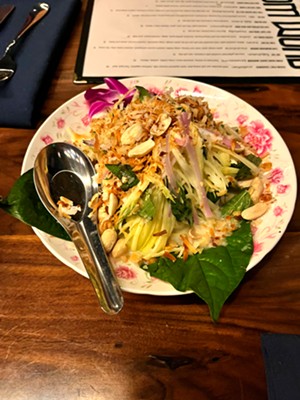 The Yam Mamuang Boran was a favorite.
Natasha Yee
The food comes as each dish is ready and they are meant to be shared: little plates with big flavors.

"We had a table on the patio last night that ordered one of everything on the menu," our server informed us. Quite the idea.

The Yam Mamuang Boran, a green mango salad with hand-torn shrimp, arrived to our table first. It was doused in fresh coconut cream, lime, and the distinct flavor of fish sauce. Toasted coconut, peanuts, and fried shallots gave the refreshing dish a nice crunch. The shrimp were sparse, so don't expect hearty protein.

A different take on protein, the Kaeng Hang Lay pork belly curry, came next. This dish is from Northern Thailand and the recipe lacks the often expected coconut milk that many Thai curries are known for. Tender pork belly adorned the aromatic stew, topped with ginger matchsticks, toasted peanuts, and a hint of tamarind. It's best poured generously over the accompanying jasmine rice. Bar seating is also available at Lom Wong.
Natasha Yee
As the evening drew on, the once-bustling dining room began to wind down. It's been a busy few months for the Martins, who hand-pound their curry paste and hand-squeeze their coconut milk. The two had their first born, baby Noah, just a few weeks after their March opening.

"Sunny was in the kitchen until the day before he was born," Alex said. "She's a badass."

She was probably cooking dishes like the Chu Bai Neung Boo Wak Now, lightly steamed squid in Thai chile, lime, and garlic sauce garnished with a generous portion of cilantro. It was just as refreshing, if not exactly as delicious, as the mango salad. Definitely sip the spicy juice afterward.

The Gai Tawt Won Pen, crispy fried chicken with Thai chile sauce, appeared last. It was a solid dish, crunchy and substantial, but it paled in comparison with the punchy flavors of its counterparts. The fried chicken is a solid plate, but not as good as the rest.
Natasha Yee
The plates at Lom Wong are mighty in flavor, but small. We enjoyed four prior to dessert. One or two more would have been welcome. It can be pricey to fill up, so go with a group to get more bang for your buck and sample seasonal menu items that you may not be able to snag next time.

Finally, it was time for dessert. The creme brulee kept it classic, though it was presented in two ways: the Tom Kha, a lemongrass and coconut version, close to the original, but with a twist, and the Roselle, named after a hibiscus species, was milky and sweet with a little bit of tang and a pale pink hue. Creme brulee two ways.
Natasha Yee
Lom Wong's menus are seasonal, so expect a new journey through Thailand, its flavors, and the Martins' experiences every time you visit.

"Food is more than what is on the plate in front of you. There are stories, people who cooked it, generations of heritage and expertise. It's a goal of ours to showcase and honor that," Alex says. "When people come into our restaurant, they're coming into our home and we're cooking for them like they're family."

www.lomwongaz.com
218 East Portland Street
360-622-9738
Wednesday and Thursday, 5 to 10 p.m.; Friday and Saturday 5 to 11 p.m., Sunday 10 a.m.to 3 p.m.
KEEP PHOENIX NEW TIMES FREE... Since we started Phoenix New Times, it has been defined as the free, independent voice of Phoenix, and we'd like to keep it that way. With local media under siege, it's more important than ever for us to rally support behind funding our local journalism. You can help by participating in our "I Support" program, allowing us to keep offering readers access to our incisive coverage of local news, food and culture with no paywalls.
Make a one-time donation today for as little as $1.