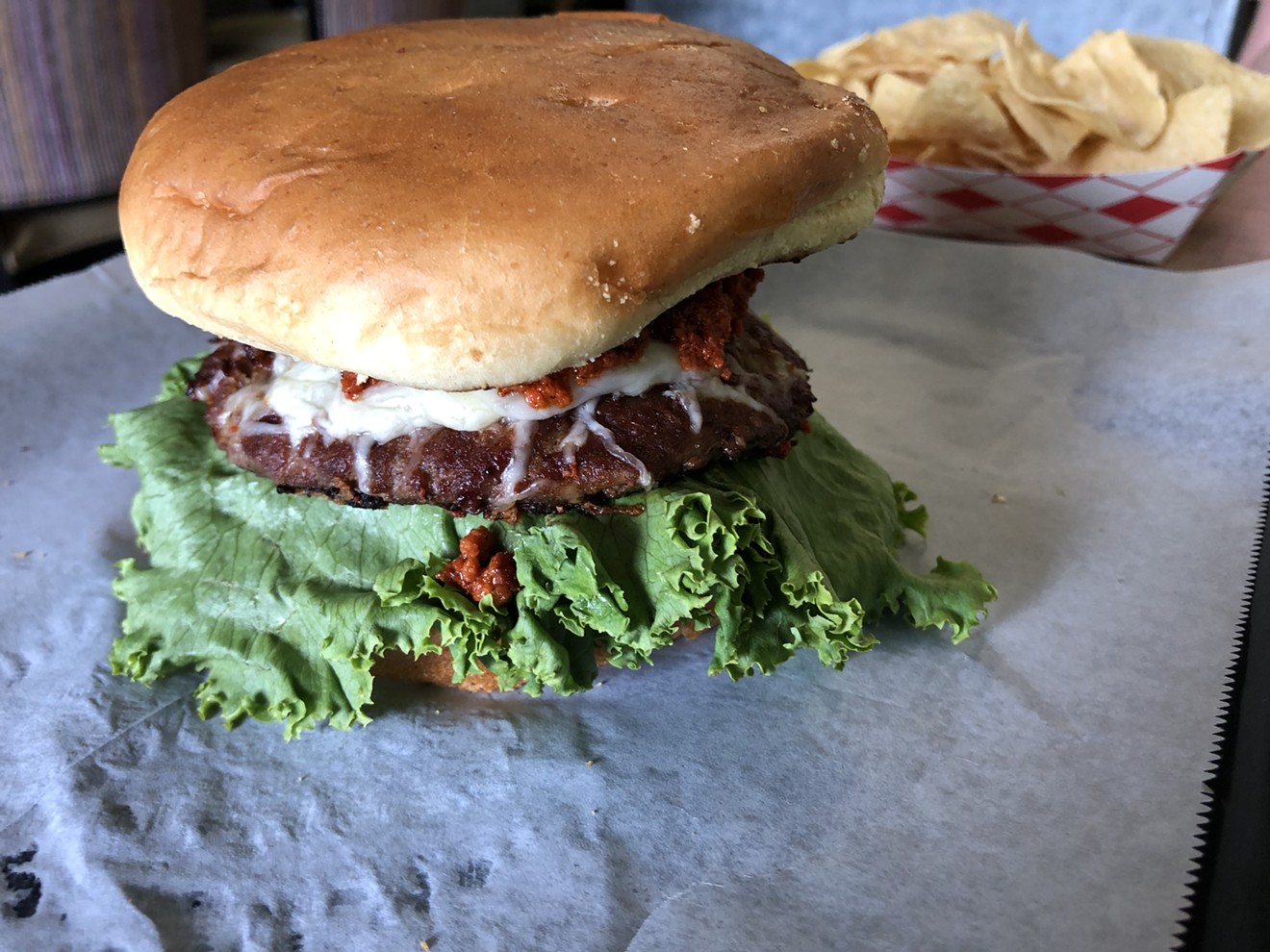 A cheeseburger with red chile Chimayo. Chris Malloy
Hatch chiles are about to blaze into season next month, but that won’t change menu items all that much at Hatch-It: Green Chile Burgers & Tacos — a new, cozy, family-run eatery on Seventh Avenue. That’s because at Hatch-It, the celebrated New Mexican peppers are recognized year-round.

They come from a fifth-generation Hatch, New Mexico, farm that sells 20 million pounds a year.

They come roasted — perhaps soon, roasted just outside the eatery.

Gary Emineth, co-owner of Hatch-It, compares Hatch chiles to coffee or grapes. When pinpointing what sets Hatch chiles apart from standard Anaheims (Hatch chiles are Anaheim chiles grown in the town of Hatch, New Mexico), Emineth sounds like a vintner or globetrotting coffee baron. “It’s the climate,” he says. “It’s the soil. It’s the length of the growing season — all that makes for unique flavors.” 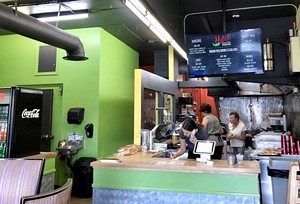 The Hatch-centric eatery is a family operation.
Chris Malloy
Emineth co-owns the eatery with his sister, Kathy Blackwell. His son, Austin, also works in the shop, having recently moved back to town from North Dakota to help with the family business.

Gary was part-owner of a burrito company in Las Cruces, New Mexico. for the better part of a decade. Earlier in life, he had no connection to New Mexican food. But after a few trips to the state east of Arizona, Gary found himself tasting chiles, mentally noting sauces, and planning.

“While I’m a North Dakota kid, I’ve got some 3 million miles traveling and eating around the world,” he says. “And New Mexico is at the top of my list.”

In a low-key room with an open grill area, burrito-rolling station, and some walls painted unripe-chile-green, the family focuses on a few simple plates. Burgers. Burritos. Tacos. Each in a few iterations, with a few sides like street corn and chips and salsa.

Burgers come in a few versions, two reveling in chile heat. A red chile Chimayo burger draws some spice from a blend of ancho and chorizo. A green chile burger highlights a New Mexican-style green chile and lots of house guacamole. Patties get a crispy toasting on the flattop.

Green chile burrito from Hatch-It, side of salsa at the ready.
Chris Malloy
There are a few burrito options. The green chile beef, a menu cornerstone, comes jammed with shreds of the stuff and just about nothing else inside the tortilla to distract from them. You’ll also see and taste soft, brown-skinned wedges of potatoes almost camouflaged among the pieces, a New World addition also made to the burritos in Las Cruces.

Tacos form the third menu pillar. You can choose from a few proteins for the tiny double tortillas, but if you’re looking to mash that green chile pedal, there are beef (ground) and pork (pulled) options.

Green chile beef and pork tacos from Hatch-It.
Chris Malloy
And so they simmer roasted Hatch chiles into a green chile sauce, right in the old Mucho Macho Taco spot. This green chile doesn’t have a ton of heat, but has a certain homespun quality to it, the kind of soupy comfort you want when you order a burger, beef tacos, or a meat-filled burrito the size of a flat football.

Hatch-It works with medium-spiced chiles. If you crave more heat, the option is covertly on the table. Gary and his family stock hotter Hatch specimens, available if you ask. Gary’s son Austin rolls with the standard medium Hatch chiles, which are almost too spicy for him.

"I would say I'm not a huge spicy person,” he says. “But I would say green chiles are an exception, they're something special."

Hatch-It: Green Chile Burgers & Tacos.
5341 North Seventh Avenue; 602-607-5036.
Monday to Saturday 11 a.m. to 8 p.m.; closed Sunday.
KEEP PHOENIX NEW TIMES FREE... Since we started Phoenix New Times, it has been defined as the free, independent voice of Phoenix, and we'd like to keep it that way. With local media under siege, it's more important than ever for us to rally support behind funding our local journalism. You can help by participating in our "I Support" program, allowing us to keep offering readers access to our incisive coverage of local news, food and culture with no paywalls.
Make a one-time donation today for as little as $1.
Chris Malloy, former food editor and current food critic at Phoenix New Times, has written for various local and national outlets. He has scrubbed pots in a restaurant kitchen, earned graduate credit for a class about cheese, harvested garlic in Le Marche, and rolled pastas like cappellacci stuffed with chicken liver. He writes reviews but also narrative stories on the food world's margins.
Contact: Chris Malloy
Follow:
Twitter: @yollamsirhc
Instagram: @malloy_chris/