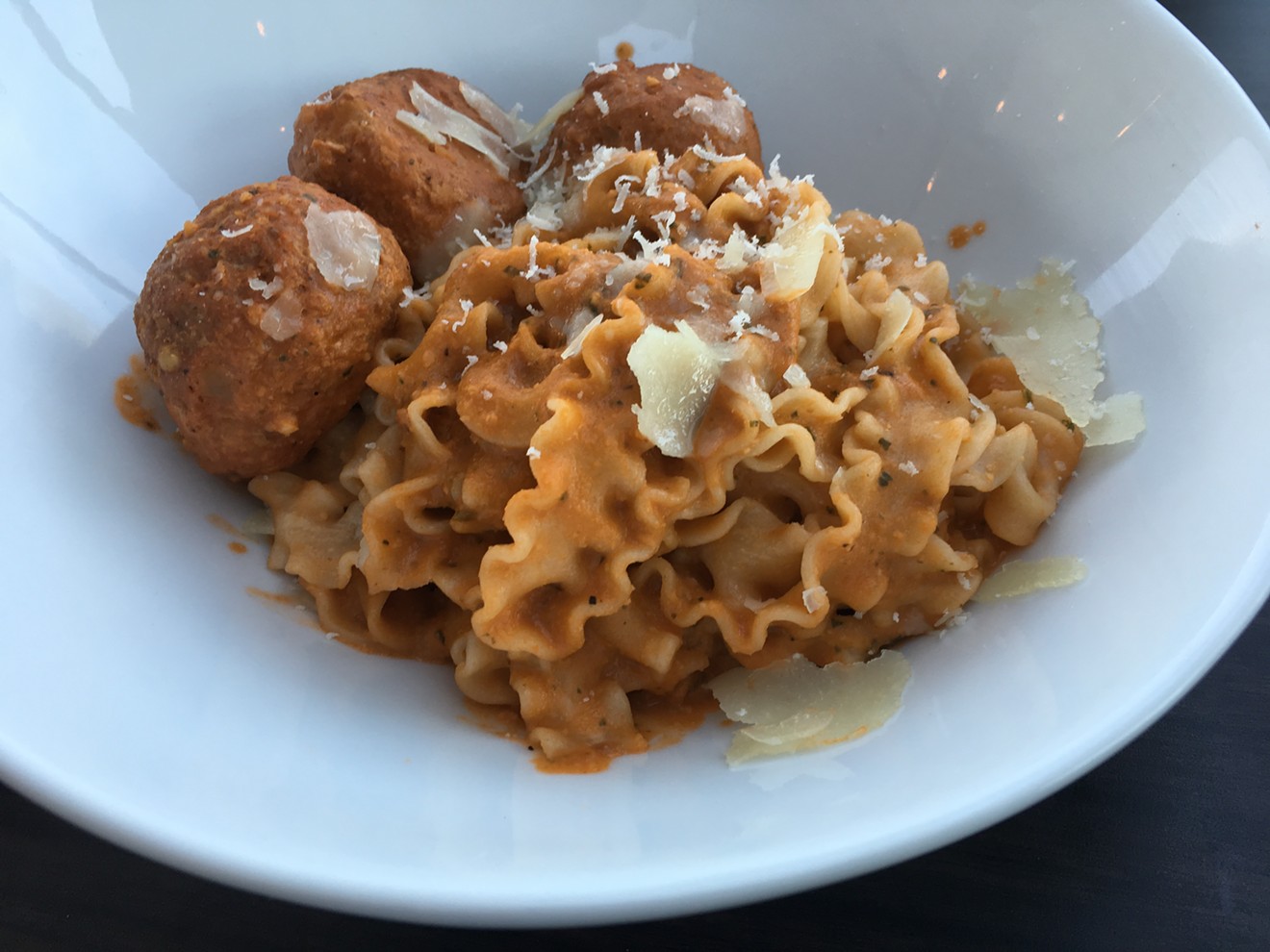 Mafalde pasta with tuna meatballs. Chris Malloy
When a new spot opens in town, we can't wait to check it out — and let you know our initial impressions, share a few photos, and dish about some menu items. First Taste, as the name implies, is not a full-blown review, but instead a peek inside restaurants that have just opened, sampling a few items, and satisfying curiosities (yours and ours).

My thoughts on eating meatballs outside one's home are well-documented, and they are not mild. The spirit of my last meatball-focused story together with my meatball-eating philosophy would seem to predict utter failure for all future meatball spots to come.

This one, though, promises to be different.

The Sicilian Butcher is the latest restaurant by The Maggiore Group. After decades of cooking in metro Phoenix at the Tomaso's line of restaurants and, lately, Hash Kitchen, The Maggiore Group would seem to have things figured out. It doesn't hurt that Tomaso Maggiore is from Sicily, and that Joey Maggiore, his son and the head chef at The Sicilian Butcher, grew up eating Sicilian food.

The Sicilian Butcher, which opened on December 1, is a Sicilian restaurant that specializes in "craft" meatballs.

What is a craft meatball? Aren't all meatballs craft meatballs, or at least the handmade ones? Given that these beloved meat spheres come from idiosyncratic blends of ground flesh and flavorings, I would argue so.

The Sicilian Butcher offers an unprecedented range of meatballs, one that will appeal to the child or stoner in everyone. You can order meatballs made from aged rib eye, turkey, lamb, crab and shrimp, and even eggplant Parmesan. More standard meatballs can be had, balls built from the likes of veal and beef.

That turfed patio is a wonderful place to be eating.

A starter of fried cuttlefish.
Chris Malloy
Heat lamps rain warmth onto diners as the sun lowers. The patio wraps around the corner restaurant. Between outside and in, a crowded bar hums. Happy hour is perpetually on the clock at the bar. The whole outdoor space is designed for now-popular bottle-and-board deals — which The Sicilian Butcher offers — or picking on starters and sipping something wet from the restaurant's 100 percent Sicilian wine list.

My wife and I went with cuttlefish. Curls of fish had been dusted with semolina, fried, and served in a miniature frying basket. They tasted great. Semolina made for more of a granular breading, one that pushes back on your eager bite almost imperceptibly before yielding. The cuttlefish had good salt. Zapped with a lemon squeeze or two, the morsels satisfied in a simple way and triggered visions of blue water and beaches.

Sfincione flatbread. This, too, comes on a board.
Chris Malloy
We also ordered sfincione, one of the restaurant's many flatbreads. The compact bread was about one-third the thickness of the ricotta dollops on top. Breadcrumbs were showered on so thickly that they browned out the ricotta in some places. Breadcrumbs are an ace in the old-school Southern Italian culinary deck, adding salt, toasty flavors, and crunch for little cost. And that's just what they did here. They made the sfincione, lending a shattering foil to the soft and creamy ricotta. Sautéed onions brought a sweet dimension. Colatura, an Italian fish sauce, could hardly be tasted.

Bianco negroni, clear as water and made with apple-cinnamon-infused vodka.
Chris Malloy
Cocktails at The Sicilian Butcher are by Sheldon Wiley, who has mixed drinks in New York. The Bianco negroni, an aggressive remix on the negroni, was powered by apple-cinnamon-infused vodka and as clear as Roman spring water. It was reserved but for the nibble of cold-weather flavors, and solid overall, but didn't quite match the gin-based original cocktail.

At The Sicilian Butcher, you pick what kind of meatball you want. (They are the only entrée.) You then pick a sauce (like vodka or carbonara) and a "bottom" for your meatballs (house-made pasta, bread, salad, gnocchi, and so on).

Our tuna meatballs came in almond pesto with wide ribbons of mafalde pasta. I absolutely wanted to like the meatballs, to have them smash my philosophy and change my approach. But they weren't the best. They were dry, and I couldn't find the pine nuts and raisins the menu had promised were inside. My mafalde, too, lacked the bite of good pasta. The sauce, blusher and creamier than expected for a pesto (even one without leaves), had congealed some by the time it got to me.

My guess is the pasta was hanging out for a while before the staff expedited and served my bowl. If my guess is right, then this is a fixable snafu.

At least, that's my hope. Because the other two dishes were great. And the concept of The Sicilian Butcher is a cool and fresh one — one that could not only turn the Valley on to some timeless Sicilian eats, but, maybe once the growing pains are done, change the way we see the humble meatball.