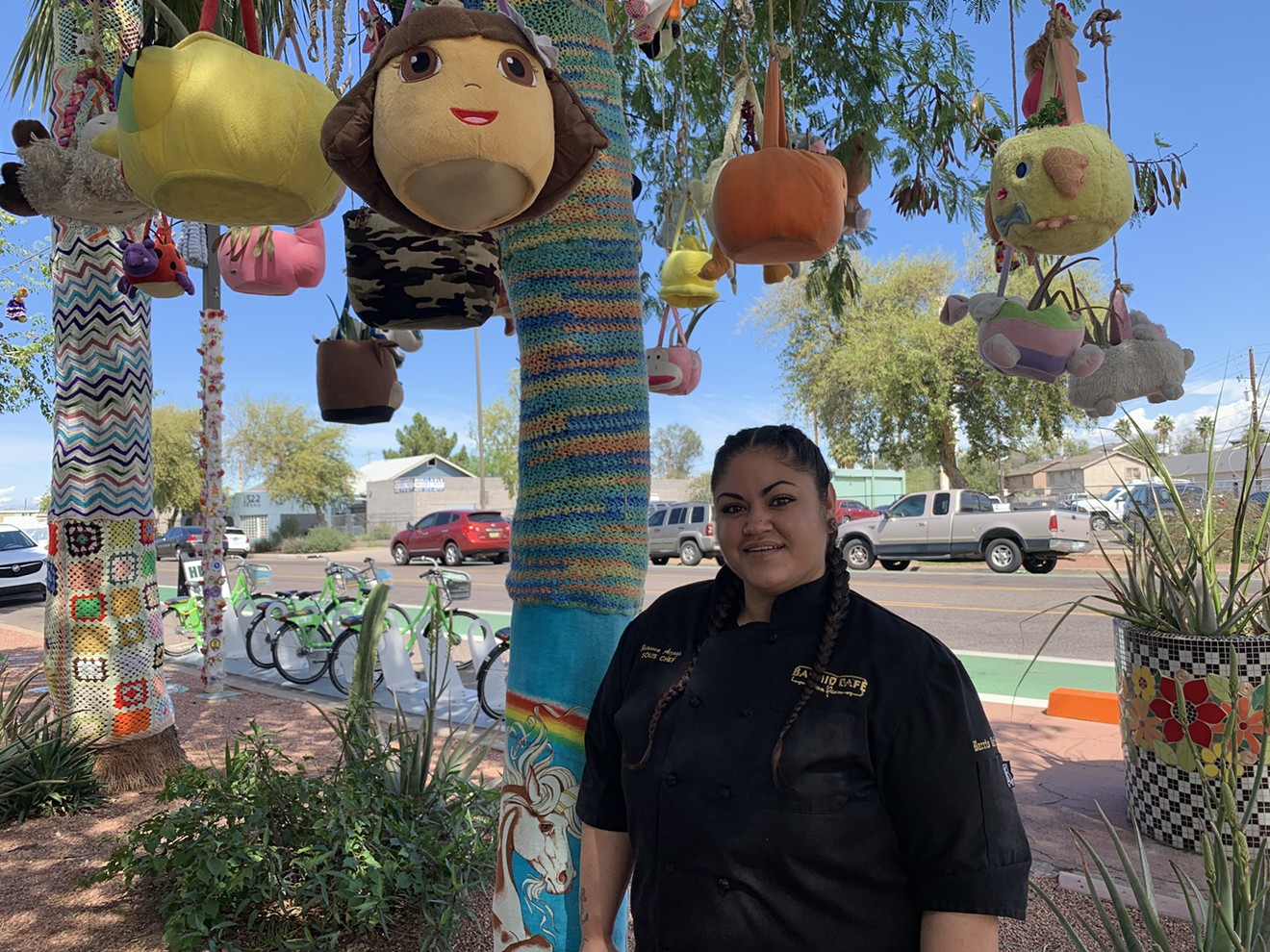 Sous chef Brianna Arzaga stands outside the unique entrance of Barrio Cafe Gran Reserva. Rudri Bhatt Patel
The welcome is unique, but warm. Several multicolored mini piñatas hang from the grey branches of a tree outside Barrio Café Gran Reserva. Even though the restaurant is closed during the day, as soon as sous chef Brianna Arzaga shakes my hand, it is clear: The personality of the entrance also extends to the woman who is the right-hand woman to James Beard Foundation Award-nominated chef Silvana Salcido Esparza.

Arzaga’s hair is pleated tight in neat braids and two prominent tattoos appear on her left forearm: bright red chilis and a molcajete — a mortar and pestle tool used in traditional Mexican cooking. “The tattoo of the molcajete is fresh,” Arzaga says proudly. “It represents where I come from and is a tribute to my culture."

As the oldest of eight siblings, Arzaga grew up in Tucson and Phoenix caring for her younger brothers and sisters. Some of that care meant cooking. “My first dish was over-easy eggs," she says. "It was a dish my cousin taught me.” Childcare came natural for Arzaga, as she often became the default caregiver while her mother battled addiction issues.

Growing up she juggled multiple jobs, which included working in a restaurant kitchen. For Arzaga, this development was unexpected. “It was surprising to me that working in the kitchen could actually be a profession,” she says.

“The tattoo of the molcajete is fresh,” Arzaga says proudly. “It represents where I come from and is a tribute to my culture."
Rudri Bhatt Patel
For several years, she worked under Samuel Murilla at the Vee Quiva Hotel and Casino in Laveen. “He took me under his wing and I developed a different appreciation for a variety of culinary skills,” Arzaga says. Not only did her perspective change under Murilla’s guidance, but Arzaga demonstrated early signs of a trailblazer. She liked the challenge and the push of the kitchen — “I was the only girl in a line full of men.”

Witnessing this gender bias fueled her perspective regarding women in the kitchen. “The kitchen is a woman’s place," she says. "They infuse their senses in cooking and nurture the ones they love with food.”

She wholeheartedly believes women invoke a compassion in their cooking that men aren’t able to match. “I know guests feel what I cook. While I am making my dishes, I am happy and dancing,” she says. Her warmth is direct as she relays her love for cooking, and there is a quiet swagger that accompanies her tone.

It is this granular, persistent approach that led to Arzaga’s earned designation as a sous chef of Barrio Café Gran Reserva. In her role, she's responsible for directing staff, teaching others the menu, and helping meet the standards of the restaurant. There are often long hours and sometimes she asks, “Is it worth it?”

Her answer, even after a 3 a.m. in the kitchen, is always yes.

Arzaga understands crisis, and perhaps this is why she knows what the sous chef title means to her personally. At her lowest point, Arzaga spent two months in a shelter with her daughter. Getting herself out of that situation meant persevering.

Some might be surprised to learn Arzaga began as a dishwasher at Barrio Café Gran Reserva. After spending a couple of hours talking with her, one learns she creates and claims her space for success. Within eight months she climbed the ranks and now, at 29, she is a sous chef in a wildly popular restaurant without any formal culinary training.

“Creating food naturally takes time. It is a dying art, but people need to understand it is important to know where food comes from.”
Rudri Bhatt Patel
Arzaga credits her rise to working in the Vee Quiva Casino prior to working with Esparza. “I had to learn how to cook a variety of cuisines, everything from Italian to American to Asian.” She say learning how to adjust and “hands-on experience” are some of the elements needed for versatility in the kitchen.

Another facet of Arzaga’s approach to cooking is using only natural ingredients. With a level of pride, Arzaga says, “We don’t use canned goods in this restaurant.” This fact is important to her. “Creating food naturally takes time. It is a dying art, but people need to understand it is important to know where food comes from.”

Knowing where food is born is another way to learn the culture. Arzaga returns to her roots by perfecting mole, something she refers to as “her thing.”

This transformation wasn’t immediate. As a young child, Arzaga says, “I’d wash off the mole from my food at school. The other kids would make fun of me because I was different.” She readily admits she carried shame in her childhood regarding her roots, but now, her arms are open in to embracing her heritage. “Mole is the mother sauce of my culture,” Arzaga says.

She likes to experiment with various ingredients in her mole, like blending rose petals and chili peppers. Her ability to use food as her muse is supported by Esparza. “Silvana is a genius and a smart woman. Our working relationship is supported by having a similar palate and cooking styles. We relate in so many ways.”

Chef Silvana Salcido Esparza
Jacob Tyler Dunn
Under Esparza's tutelage, Arzaga has learned to appreciate integrating smoking techniques into her repertoire. “Not many women are accustomed to handling meat and I love using the temperature controls and the natural elements of wood, the ground, and heat.” Arzaga’s tone and cadence quicken and she enthusiastically talks about this new passion.

A deep-seated love of the culture and Arzaga’s grit lend to her success. “I come from struggle, but I know I can overcome. I am here to show I am good enough and I enjoy every single day when I am learning in the kitchen.” Every perspective Arzaga adopts is rooted in story, whether from childhood, her struggles, her bond with her daughter. And it all lends to her compassionate, but direct, demeanor.

Arzaga says she doesn’t know what the future will offer, but she knows, she won’t take anything for granted. “I will continue to cook, teach, love," she says, "And lead others to help find their passion.”
KEEP PHOENIX NEW TIMES FREE... Since we started Phoenix New Times, it has been defined as the free, independent voice of Phoenix, and we'd like to keep it that way. With local media under siege, it's more important than ever for us to rally support behind funding our local journalism. You can help by participating in our "I Support" program, allowing us to keep offering readers access to our incisive coverage of local news, food and culture with no paywalls.
Make a one-time donation today for as little as $1.