7 Best Exhibits to See in Metro Phoenix This Month See works by Emily Ritter and additional artists at The Gallery at Tempe Center for the Arts. Emily Ritter/Tempe Center for the Arts
Art lovers never need an excuse to flock to local art spaces, but it's a tougher sell for people with other interests. Turns out, the summer exhibition lineup in metro Phoenix has a little something for everyone, from serious art history buffs to people whose passions tend toward history, technology, or science.

They're all interconnected, of course. And the artists featured in these exhibits, many of them based right here in metro Phoenix, do a brilliant job of making that clear. For starters, there's Emily Ritter, whose sculptures imagine a future filled with mutant plants spawned by environmental degradation.

Here's a look at where you can enjoy their work around town this month.

'In the Absence of Color'

See how 10 artists work in the absence of color, using variations of black and white as they explore themes such as the gap between the conscious and unconscious, sacred burial rituals, and biomorphic forms. The exhibition includes Denise Yaghmourian’s Bunny Rabbit created with black acrylic paint dripped onto white canvas, and Brian David Griffith’s Liminal 1510 created with carbon pigment from accumulated smoke on paper. The exhibit continues at Bentley Gallery through July 13. Admission is free. Los Angeles artist Esau Andrews was born and raised in Mesa, so his paintings are tinged with surrealism and reflect a deep connection to desert life, plus a childhood spent steeped in pop culture. The exhibit includes an entire wall of skate decks featuring Andrews' designs, a gallery wall transformed into a mural of hybridized animals, a display case filled with Andrews’ illustration work, and a wall with sketches that illuminate his artistic process. The exhibit continues at MCA Museum through August 4. Museum admission is free. The Gallery at Tempe Center for the Arts
700 West Rio Salado Parkway, Tempe

Three ironing boards painted with desert mirage imagery by Laura Spalding Best form a triptych on the back wall at The Gallery at TCA, where the “Water” exhibit explores water from multiple perspectives including history, mythology, sustainability, and more. Nearby, Kendra Sollars’ video installation contrasts serene, balletic underwater movements with a forceful plunge into deep waters. The exhibit features 10 artists, including three who will be working in gallery studio spaces through August 3. The exhibit runs through August 31, and admission is free. Just a small section of the "Color Riot!" exhibit at the Heard Museum.
Craig Smith/Heard Museum


There’s a dark history behind the brightly colored textiles on view in “Color Riot! How Color Changed Navajo History” at the Heard Museum, which makes seeing these works even more meaningful. They were created after the U.S. deported Navajos from their lands in 1864, imprisoning them in the Bosque Redondo before allowing them to return years later to lands located in what’s now Arizona and New Mexico. Weavers encountered new materials and techniques, which influenced their own designs. The exhibit continues through September 2. Museum admission is $18 for adults. Here in the Southwest, we tend to think of Georgia O’Keefe when it comes to American Modernism. But the artist Agnes Pelton made significant contributions as well, which are reflected in more than three dozen works featured in “Agnes Pelton: Desert Transcendentalist” at the Phoenix Art Museum. The exhibit explores Pelton’s fascination with transcendentalism, and traces the evolution of her work using a fascinating timeline and displays of books and other materials that influenced her work. The exhibit will travel to the Whitney Museum of American Art in New York, and other sites, after closing here on September 8. Museum admission is $23 for adults. 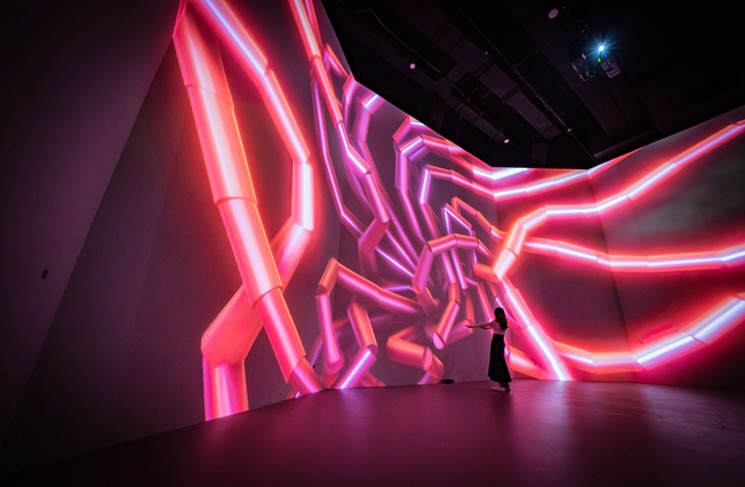 It’s difficult to know how history will judge the current interface of art with technology, or the emphasis in some quarters on art as interactive entertainment. But there’s no denying that artists are engaging with technology to intriguing effect, as evidenced by the works featured in “Mutual Reality: Art on the Edge of Technology” at SMoCA, which includes works by nine emerging and pioneering artists working with everything from tape to virtual reality technology. Featured artists include Marpi, Aakash Nihalani, and Purring Tiger. The exhibit continues through October 6, and museum admission is $10 for adults.
KEEP PHOENIX NEW TIMES FREE... Since we started Phoenix New Times, it has been defined as the free, independent voice of Phoenix, and we'd like to keep it that way. With local media under siege, it's more important than ever for us to rally support behind funding our local journalism. You can help by participating in our "I Support" program, allowing us to keep offering readers access to our incisive coverage of local news, food and culture with no paywalls.
Make a one-time donation today for as little as $1.