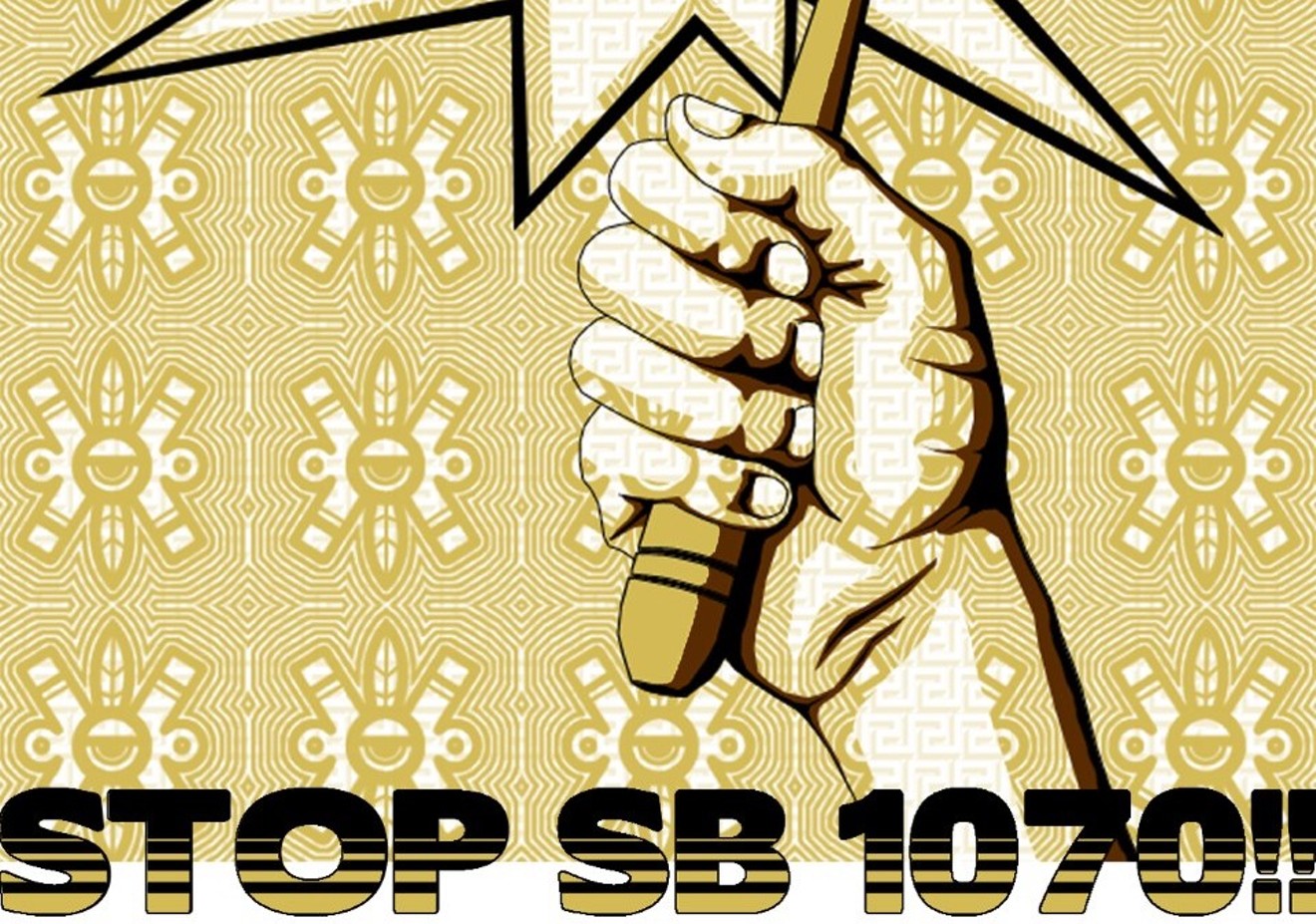 Checking out the detail in a work by Reggie Casillas. Reggie Casillas
A new art exhibit at the Arizona House of Representatives building is causing conflict between Democratic and Republican legislators. The “We Are Still Here” exhibit highlights the 10-year anniversary of Arizona’s SB 1070 legislation, which critics slammed for promoting racial profiling.

The exhibition was installed on January 9. It’s curated by Carmen Guerrero and Marco Albarran and includes works by several local artists who explore the effects of SB 1070 on Latino and indigenous community members.

That's a problem for House Majority Leader Russell Bowers, according to Andrew Wilder, the director of communications for the Republican Majority Caucus. In a January 9 email to Phoenix New Times, Wilder called the artwork “divisive” and said the exhibit includes “partisan political messages.”

The exhibit includes this work that was featured on a Phoenix New Times cover.
Martin Moreno
For Democratic House Representative Isela Blanc, the exhibit is a way to highlight the fact that it has been a decade since SB 1070 was passed. “This year is a pivotal year and represents an opportunity to highlight creative works by artists who were influenced and impacted by the passage of SB 1070,” she wrote in a January 12 email to New Times.

But Bowers has another concern.

Wilder’s email also states that the Democratic Caucus violated House rules by removing another exhibit consisting of on-loan artwork created by refugee children from Mexico. “Speaker Bowers intends to restore the children’s artwork to a prominent place in the House building,” Wilder wrote.

Blanc worked with the curators to bring the “We Are Still Here” exhibit to the House of Representatives building. Blanc represents District 26, which includes portions of Mesa, Phoenix, Scottsdale, and Tempe. She’s running for Senate in 2020.

Most of the exhibit is installed in a public third-floor hallway, adjacent to offices for Democratic House members. “We are using the democratic wing to bring attention to this moment in history and its influences, good and bad,” Blanc also stated in her January 12 email.

This work hangs inside a Democratic lawmaker's office.
Reggie Casillas
However, one work was installed inside an office rather than the hallway. Blanc says her staff shared several images of artworks with Bowers’ staff before the exhibit was installed, and was told that one particular work could not be placed in the public hallway. Bowers has not responded to our request for confirmation of that exchange or related details.

The artwork in question was created by Reggie Casillas. It features a raised hand holding a noisemaker and text that includes the phrase “Stop SB 1070.” That piece was installed inside the office for Democratic House Representative Diego Rodriguez, who represents District 27.

Blanc says she worked with a member of her own party. “I got permission from my leader, who is Charlene Fernandez, to update the artwork with a Latino theme,” she says. Fernandez heads the Democratic Caucus for the Arizona House of Representatives.

Even so, additional artworks are being relocated to offices, according to an email update Wilder sent to New Times on January 13. Wilder says that Bowers and Fernandez "met and agreed that the installation of artwork on the third floor is the Speaker's prerogative." 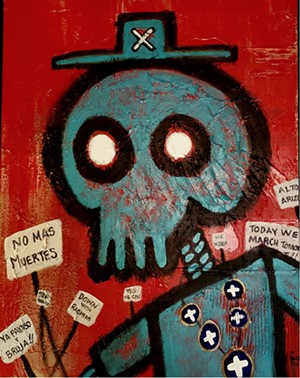 The exhibit includes this artwork by Marco Albarran.
Marco Albarran
The email also states that some artworks, namely those that are political in nature or reference a specific policy, were installed without approval. "The Democratic Caucus is working to find a more appropriate place for those specific pieces to be displayed, such as inside member offices," Wilder wrote.

As of this writing, neither Wilder nor Fernandez had replied to New Times' request for a list of the specific artworks that will be installed outside of public areas.

Moving forward, Bowers hopes the children’s artwork can be returned to the House of Representatives building.

“We Are Still Here” is scheduled to be up until June, according to Guerrero.

Meanwhile, several Democratic House members have co-sponsored a new piece of legislation called SB 1071, which is aimed at repealing SB 1070. And many local artists are continuing their activism, which Guerrero and Albarran reference in their curatorial statement for the show.

They wrote, “Ironically, this bill spawned an artistic movement for social justice that continues to this day.”
KEEP PHOENIX NEW TIMES FREE... Since we started Phoenix New Times, it has been defined as the free, independent voice of Phoenix, and we'd like to keep it that way. With local media under siege, it's more important than ever for us to rally support behind funding our local journalism. You can help by participating in our "I Support" program, allowing us to keep offering readers access to our incisive coverage of local news, food and culture with no paywalls.
Make a one-time donation today for as little as $1.