The Dressing Room's novel take on ceviche is just one of its many ways of tinkering with classics. Robert Isenberg

From Sam Fox's latest to the Melrose District's newest, check out these additions to the restaurant scene.

The Dressing Room on Roosevelt Row

The Dressing Room is a tiny new gastropub in the heart of Roosevelt Row. The dining room has only a few tables. The petite bar overlooks an open kitchen. Most of the action takes place outside, on a concise patio partially hidden from the street.

Tucked away at the end of an Old Town inlet, Nonna's puts the Old World smack in the middle of the Old West.
Melissa Campana
Nonna Urban Eatery in Scottsdale

You might not believe us when we say Nonna Urban Eatery has only been open for two months.

First of all, many of your fellow diners will be repeat customers. You’ll know this because they will be greeted with a huge hug at the door from Valentina, whose warm, Sonoran heart can be found firmly planted on her sleeve. With a shout of delight, she will guide her new best friends to one of a handful of tables, and point out what has changed on the menu since they were here last Tuesday. 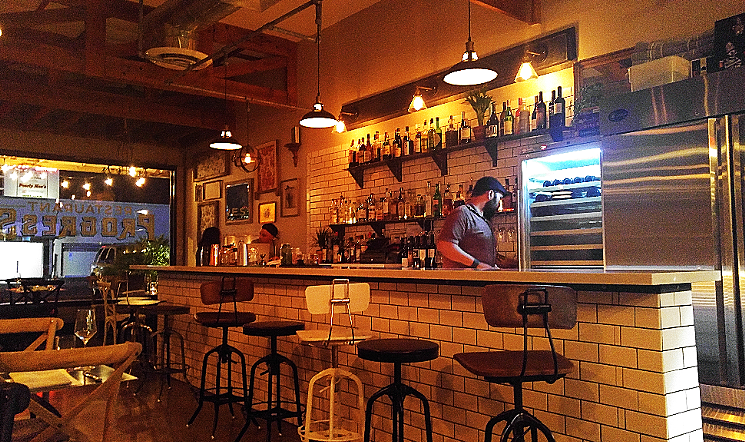 There are lots of places to eat and drink on Seventh Avenue, but Restaurant Progress feels a little different. The restaurant, open for dinner and late-night service only, is an intimate, well-lit spot with little more than 30 seats, and it brings seasonal, fine-dining airs to a commercial strip that's mostly known for casual diners and taco spots.

Modern Market in Scottsdale opened in late February, and will have two sister locations in metro Phoenix by September 2017. You can expect to see a lot of yogis fresh from Savasana, families taking advantage of the kids-eat-free-Sunday-and-Monday night deal, and loners who want to kick back with a book and a healthy meal in a bright, quiet place.

Ladera Taverna y Cocina has much going for it, including an energetic young executive chef, Jorge Gomez; a sprawling outdoor patio that already seems to be a neighborhood asset; and, of course, a strong, crowd-pleasing menu that feels like a well-honed, greatest hits of regional Mexican dishes, delivered with a refined eye and careful preparation.

Doughbird, which opened in March at the Arcadia Gateway plaza, is the first new Fox concept to open in the Valley since Flower Child debuted in 2014. The concept — pizza and rotisserie — might strike you as a bit unwieldy, or maybe even a little weird.

The pairing makes sense if you come to understand Doughbird as a sort of a big tent of a restaurant. The menu, credited to Sam Fox and longtime FRC chef Clint Woods, reflects a something-for-everyone philosophy, so that everyone from your vegetarian sister to your steak-loving dad to your pizza-obsessed friend will probably be appeased.

The Chopped Cheese sandwich has become a favorite in parts of New York City, and the Outta Bronx version might mark its first appearance in metro Phoenix.
Patricia Escarcega
Outta Bronx in Phoenix

"Don't come here if you're on a diet," Aziz Othman says with a laugh, when asked to describe the menu at his new restaurant, Outta Bronx.

The counter-service restaurant has been in business for only about two months now, but it already seems to be a neighborhood hub for locals with a weakness for meaty sandwiches and cheese-smothered fries.