Chefs for the Polls Hands Out Ceviche, Tonjiru, and Congratulations at the Camelback Center 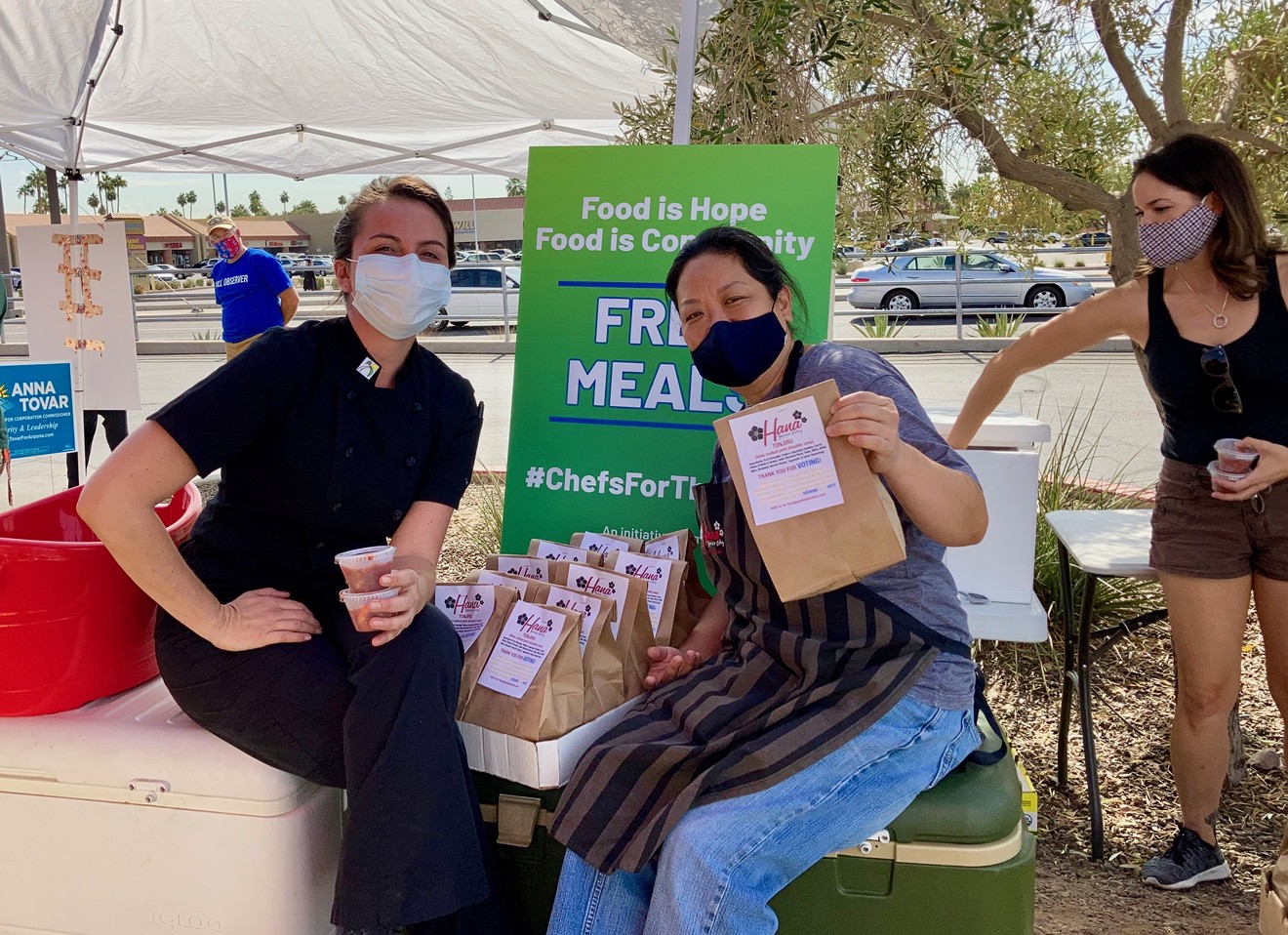 Hashimoto, Leoni, and their teams are part of Chefs for the Polls — a non-partisan effort initiated by World Central Kitchen. Chefs, restaurant staff, and volunteers were handing out food at eight polling locations, including from their tent at 17th Avenue and Camelback Road.

Across the country, chefs and restaurant staff are handing out free food to voters and members of the community.
Lauren Cusimano
The Washington, D.C.-based World Central Kitchen is a non-profit organization known for providing free food to communities in need. It was founded by a Spanish-American chef in 2010 following the earthquake in Haiti.

It was Leoni who was asked by World Central Kitchen to orchestrate the Phoenix chapter of Chefs for the Polls. She was clearly humbled.

“For chef Jose Andres to think that I’m capable, that Phoenix is capable, of doing what he does, that’s incredible,” she says.

And why was The Breadfruit is serving ceviche? In addition to funds provided by World Central Kitchen and the Walton Family Foundation to prepare and hand out free food, WCK got an anonymous donation of $12,000. It came with stipulations: It had to be used to offer sustainable seafood, and it was meant for Chef Leoni. That's when she roped in Arizona Desert Shrimp.

“I don’t know who did it!” Leoni says excitedly. “I want to scream about it it’s so awesome.”

Overall, Leoni hopes the initiative further welcomes people to vote in person. “It’s just encouraging them to express their opinion; That way people feel invested in their communities,” she says. “We’re handing out gratitude. Just, good will.”

Leoni says she been involved in the election process before, but never at this level. “I feel like all the progress that we’ve had in being kinder to each other and our planet, it’s being eroded, and I would like that to change,” she says. But, she says, she doesn’t care how people vote; she just wants an engaged community. “To cast your vote to be held accountable? That's huge,” she says.

“I’m about to hire me, and fire me, somebody,” says this man, who left with two cups of The Breadfruit's ceviche.
Lauren Cusimano
Sharing the same tent, Hashimoto, fellow Hana owner Lynn Becker, and a small group of staff, family members, and friends have been handing out food since Friday, averaging about four hours a day handing out soup.

“It's a stick-to-your-ribs meal,” she says. “Unfortunately, it’s going to be 97 degrees today.”

Though Chefs for the Polls is a non-partisan effort, Hashimoto, a third-generation Japanese American, says diversity issues are what drove her to participate personally. But she’s not pushing the conversation. She and her team are mostly shouting out to people that they have free food, only after congratulating them for voting.

“I think the main objective for doing this is for people to understand that right now, no matter what’s going on, no matter what they’re feeling, food is our common denominator,” Hashimoto says. “It’s not just about business. Food is about everybody; food is about community.”

Some voters even came back for seconds.
Lauren Cusimano
And there’s one other incentive. Both The Breadfruit and Hana have been closed since March, though Hana has been doing takeout and delivery. “It’s important to be able to meet the people who support you in the community,” she says. “It also helps to motivate us during this time; to get out of this really horrible 2020 funk.”

Some members of the small restaurant teams were running unlimited amounts of food over to people’s car windows. One familiar man pulled. He’d told his family about the food they were handing out here, maybe he let someone try a bite, and he was sent back for more. Becker brought over a half dozen of Hana’s meals in little brown lunch bags.

Becker says a woman she handed food to yesterday was moved to tears. “She said, ‘No one has ever given me anything before,’” Becker says. “I hope she comes back today.”
KEEP PHOENIX NEW TIMES FREE... Since we started Phoenix New Times, it has been defined as the free, independent voice of Phoenix, and we'd like to keep it that way. With local media under siege, it's more important than ever for us to rally support behind funding our local journalism. You can help by participating in our "I Support" program, allowing us to keep offering readers access to our incisive coverage of local news, food and culture with no paywalls.
Make a one-time donation today for as little as $1.