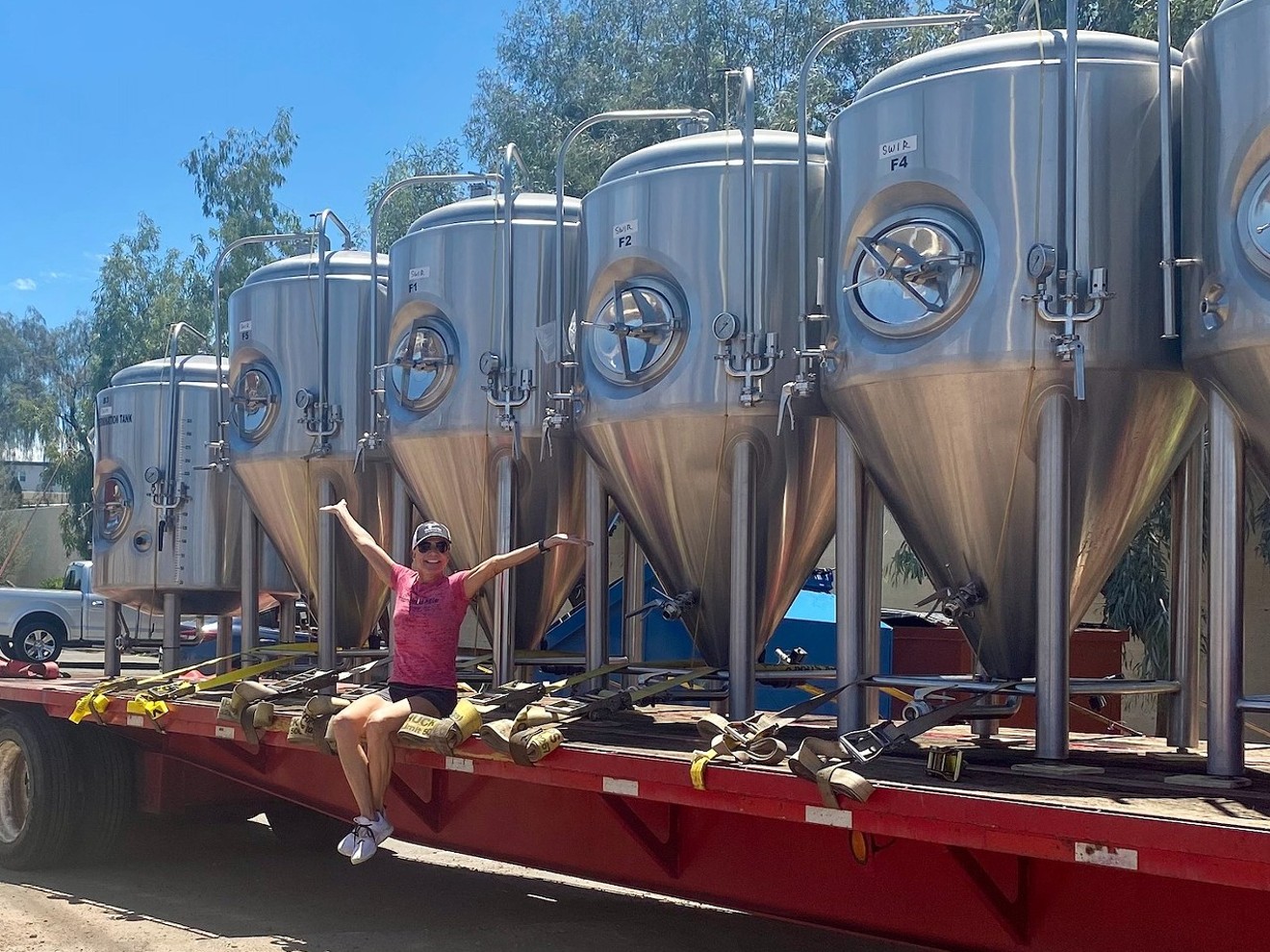 At the end of August, the Tempe brewhouse and taproom is set to open its doors on a plot tucked behind a hotel along Scottsdale Road. But decades ago, just steps from this spot, then-Arizona State University student Rigler spent hours at The Devil House, a popular bar that was all the rage.

Her connection to this specific Tempe neighborhood runs deep.

An accomplished Ironman athlete, Rigler has competed in the race at Tempe Town Lake, a short stroll from Hundred Mile. On a recent trip to visit her family in Iowa, she found a photo circa 1982, taken from her dorm room at Manzanita Hall. In it, she’s in front of her window pointing north, toward the site where her brewery sits today, 40 years later.

Some say it's a coincidence. Or luck. Rigler has a better word.

“Serendipity. That’s how my life works quite a bit,” Rigler says with a laugh.

But what she and head brewer Valerie Adee are doing is serious craft beer business.  Their small batch operation promises to deliver a lineup of hoppy brews, with Pilsners and West Coast IPAs — their personal preferences — as specialties of the house.

Hundred Mile Brewing Company will have a focus on hoppy beers with Pilsners and West Coast IPAs as house specialties among its 24 taps.
Photo courtesy of Hundred Mile Brewing Company
The succinct 10-barrel brewing capacity lends itself to a bevy of rotating recipes and fresh beer flowing from 24 taps. Adee assures everything will be true to style. The freshness is also highlighted in the name, as in the beer won’t travel for more than 100 miles.

“With our high tap capacity, I can play with seasonals and use local fruits, citrus, grapefruit, tangerines,” Adee says with the excitement of a kid about to embark on a hopefully successful experiment. “That’s part of the fun of being a brewer. Figuring out how to do each one right.”

Rigler's past experience will help in the process. After earning her microbiology degree, she moved to California and worked for a company that sold brewery equipment. She traveled around the West Coast doing professional beer research, which nurtured her passion and inspired her to complete the Certification Brewing Program at U.C. San Diego.

Opening her own craft brewery in Arizona was a dream that Rigler knew was within reach. Years ago she pledged that after her youngest of four kids graduated from high school, she would actively pursue it. Coincidentally, or rather serendipitously, that child is about to begin her senior year at ASU just as her mother’s vision becomes a brick-and-mortar reality.

Rigler saw the 10,000-square-foot building and imagined patrons drinking beers on a patio after strolling lakeside or attending a football game.

“I’m so excited I got this location," Rigler says. "I couldn’t imagine having my brewery anywhere else."

The building was built in the mid-1970s, when development on the block was nonexistent. In fact, Rigler doesn’t recall noticing it during her college years. It’s likely that when the Devil House became the dance hotspot Club Rio a decade later, regulars wouldn’t remember it either.

It was a print shop in its previous life, with a long rectangular frame, roll-up windows, and no interior walls. Rigler admits it was daunting to see so much open space to play with. But then the vision took over. Rigler enlisted the help of Xan Creative, responsible for designing Postino, for the interior details.

“This building has a bunch of character. It screams brewery,” Rigler says.

Event space and brewing equipment occupy about half of the building, with the remaining space housing the taproom and kitchen. One of two bars will be outside on the dog-friendly patio. The food menu will complement Adee’s handiwork with burgers, tacos, and other beer-friendly bites. Wine and spirits will be offered as well.

Also a former Sun Devil, Adee double majored in French and history before also moving to California where a passion for craft beer led to a spot on the Firestone Walker Brewing Company’s Research and Development team. Her award-winning career includes positions as brewer at Firestone and head brewer at Trademark Brewing in Long Beach, California.

Hundred Mile Brewing Company owner Sue Rigler (left) and head brewer Valerie Adee will open their craft brewery and taproom steps away from Tempe Town Lake at the end of August.
Photo courtesy of Hundred Mile Brewing Company
Adee and Rigler met through an event by the Pink Boots Society, an international non-profit that promotes women and non-binary individuals’ roles in the fermentable beverage industry. They clicked immediately and bonded over their love for West Coast IPAs and their Iowa connection, as Rigler’s from the state and Adee spent part of her childhood there. When Rigler needed someone to take the helm at the brewery, Adee was the obvious choice.

“Maybe it brings in more of a female demographic. Even if it piques people’s interest then I hope the beer speaks for itself when they get here,” Adee says.

This partnership was not deliberate but it was clearly serendipitous. In any case, it’s one more detail that makes for a great story. One of many that Rigler agrees would be best shared over sips with old friends and new ones who come together to celebrate great craft beer. She hopes that gathering spot will be Hundred Mile.

“You’re creating this space, and it’s not just about the beer and the food. And that’s what craft beer creates, a community and the engaging stories that come from it,” Rigler says. “And there’s a story in every pint.”

690 N. Scottsdale Road, Tempe
hundredmilebrewing.com
KEEP PHOENIX NEW TIMES FREE... Since we started Phoenix New Times, it has been defined as the free, independent voice of Phoenix, and we'd like to keep it that way. With local media under siege, it's more important than ever for us to rally support behind funding our local journalism. You can help by participating in our "I Support" program, allowing us to keep offering readers access to our incisive coverage of local news, food and culture with no paywalls.
Make a one-time donation today for as little as $1.