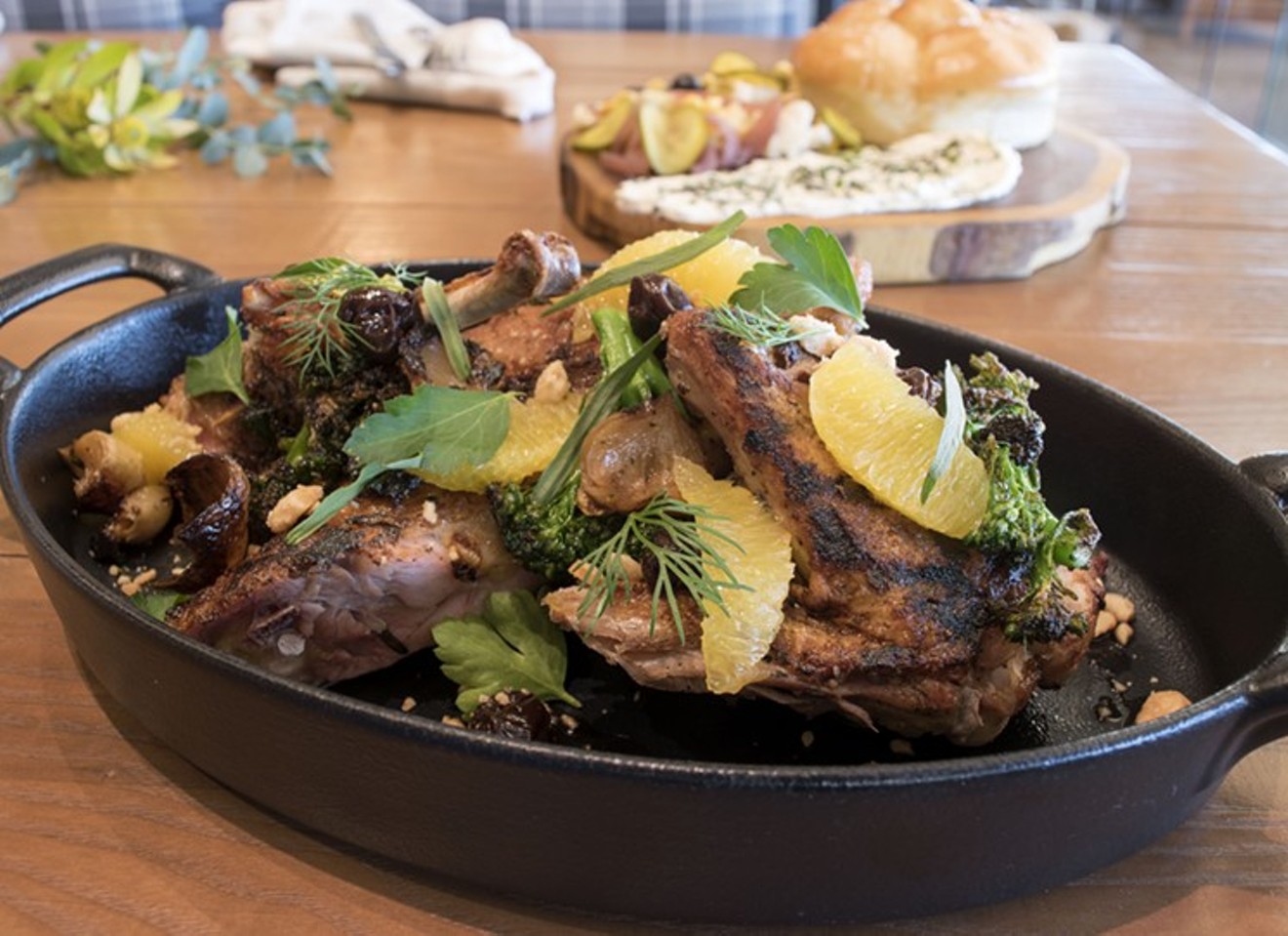 
We have been on something of a run with our cafe reviews — the last few weeks have featured restaurants with fascinating flavors. Even the restaurants that make a misstep here and there seem to have great potential. We have eaten good Mexican, border-hopping Asian, and modern American. Check out any one of the four restaurants below for a solid meal.

The Naco Torta at Gallo Blanco.
Jackie Mercandetti
Gallo Blanco in Phoenix
When Gallo Blanco at the Clarendon Hotel abruptly closed in early 2015, its departure left a notable gap in the Valley’s small constellation of modern, mid-range Mexican restaurants. Last year, after a two-year hiatus and much anticipation, Gallo Blanco reopened in downtown Phoenix’s Garfield neighborhood. The all-day antojitos (“little cravings”) menu, which will look familiar to fans of the old Gallo Blanco, is uniformly strong. Tacos are simple and exquisite: deftly marinated meats served on smooth, freshly pressed corn tortillas, designed to be demolished in a couple of bites. Carne asada, chopped into glistening, gorgeously charred cubes, is juicy and rich. But Gallo Blanco really shines as a torta joint. The restaurant’s Mexican sandwiches are better than ever, thanks to fresh, thick telera rolls, which are now baked in-house. And don't overlook bartender JT Taber’s cocktail menu, which includes playful concoctions like the Jamaica, made with Jamaica-infused tequila, or the crisp yet snappy Ancho Borracho, a gin cocktail featuring ancho verde and ginger.

Korean eats at Drunken Tiger.
Jackie Mercandetti
Drunken Tiger in Mesa
Here in metro Phoenix, the global reach of Korean culture is evident in our city’s flourishing Korean food scene. We have all-you-can-eat Korean barbecue parlors and local food trucks like Hibachibot that are bringing mashups like bulgogi tacos to the streets of metro Phoenix. Plus, we have spots like Drunken Tiger, a Korean restaurant and bar in Mesa that highlights the endlessly adaptable and eminently cool genre of Korean bar food. The drink menu boasts Korean beers like the oft-derided yet popular Cass beer, and there are plenty of soju cocktails, too. The appetizer menu includes highlights like ttoek kochi — crisp rice cakes smeared with lightly spicy chile sauce and peppered with crushed peanuts. Drunken Tiger’s signature chicken dish is buldak, also known as fire chicken: ultra-spicy, silky hunks of chicken bathed in a fiery hot sauce, and buried under lavish amounts of melted mozzarella cheese. There’s nothing subtle about this flavor-packed dish, which derives much of its appeal from the chicken’s supple texture, and the bold, red-hot properties of its gingery hot sauce.

Pastries and other good stuff
Jacob Tyler Dunn
New Wave Market in Old Town Scottsdale
Super Chunk Sweets & Treats — Country and Sergio Velador’s acclaimed Old Town Scottsdale sweets shop and bakery — has been carving out a niche as a quirky purveyor of creative treats since 2013. Starting about two years ago, Super Chunk began to introduce a few light, savory items to the menu, and last year the Veladors debuted their latest project: New Wave Market, a counter-service breakfast and lunch cafe. New Wave Market is located on Sixth Avenue, in a space adjacent to its sister shop, and it boasts a small, airy dining area and gourmet food market. Highlights include New Wave’s ghee-fried egg, which is served on a homemade sea salt bagel; New Wave Market’s Hawaiian Bread French toast, which is thick-cut, lightly sweetened, and boasts buttery, crisp edges that yield to a softly fluffy interior; and Dynamite Tuna, served on a tender and pleasantly chewy housemade ciabatta roll, the tuna beautifully complemented by the restaurant’s creamy, peppy dynamite aioli. Thanks to New Wave Market, the Veladors are now also purveyors of fine coffee and gourmet tea. 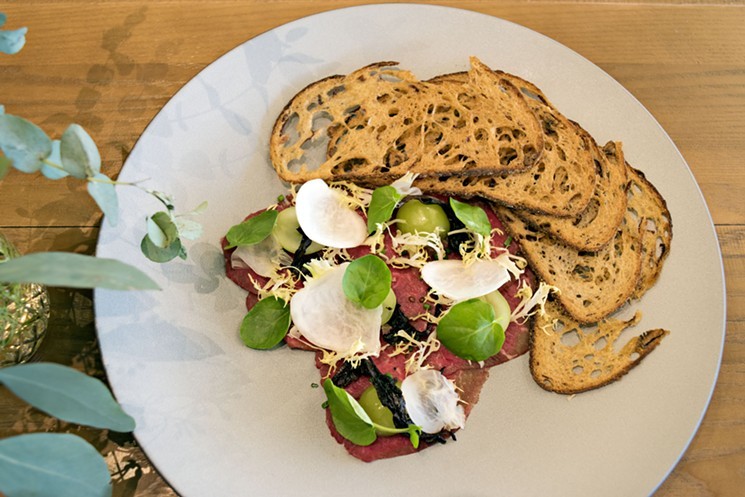 Bison carpaccio
Jackie Mercandetti
Mowry & Cotton at The Phoenician
Fine dining has traditionally been a staple of the Valley’s luxury resorts. But a new breed of restaurant — modern and sophisticated, yet also casual and approachable — is popping up at some of the swankiest resorts in town. Mowry & Cotton, which debuted at The Phoenician last fall, is part of this new generation of Valley resort restaurants. It takes over the sprawling, ground level space formerly occupied by Il Terrazzo, a fine dining Italian spot. The space has been refashioned into a crisp and airy modern American restaurant, faintly tinged with the airs of a modern Western farmhouse. Mowry & Cotton is all about shared plates, often seasonal ingredients cooked by fire, served around a communal table. Their fresh-out-of-the-oven buttermilk buns, flame-cured vegetables, and bison carpaccio are all highlights. The natural salty richness of the carpaccio dovetails beautifully with a lovely, crisp salad of radicchio, thinly-sliced turnips, and grapes.