Chef Claudio Urciuoli is all smiles fresh from a trip home to Italy and preparing to launch Source, his Mediterranean restaurant that will focus on organic ingredients and their producers. Courtesy of Source
Chef Claudio Urciuoli’s recent trip to visit his family in Italy sounds like something straight out of a travel show, complete with picturesque environs and tantalizing food.

He visited a friend who makes extra virgin olive oil in Umbria. And then another who grows farro and other varieties of legumes only found in Italy. Of course, a trip to see a pal who makes wine was a must.

“When I go home I spend the time with family. My mom, my sister," Urciuoli says, "and then I go all over to see friends."

This vacation included some business mixed with pleasure. It was a reunion of sorts for Urciuoli and the people who make his seed-to-table dishes possible. This connection is at the heart of his newest restaurant, Source.

In the Valley, the chef is known for his restaurant Pa'La, which has locations in downtown Phoenix and the Arcadia area. Now, he's focused on his latest project which allows him to bring the flavors and textures inspired by his home region to metro Phoenix. Urciuoli writing the day's menu.
Jackie Mercandetti
Source, a quick-service restaurant slated to open in Gilbert this September, will be built on all things Mediterranean, from the culture to food, Urciuoli says. Sandwiches made with artisan bread, hearty and creative salads, pizzas, small plates, and other wood-fired delights will have the spotlight. Many of the ingredients will come directly from purveyors Urciuoli knows well.

With a concept focusing on the root of where the dishes come from, Source isn’t just a clever name.

“I’m able to have my business because of a great connection with people who do farming, fishing… and that’s what’s most important to me. That’s why we created Source, to recognize the people who work very hard,” Urciuoli says.

The new restaurant will be located in Epicenter at Agritopia, a master-planned community and town center. Source will offer a similar style to Pa’La, with counter service in a manageable 2,000-square foot space - two characteristics Urciuoli prefers.

Some dishes the chef can't wait to share include an Albacore tuna sandwich made on whole grain panozzo filled with arugula, pickled green onions, and Pantelleria capers, a seasonal salad that flaunts avocado and Forum Cabernet vinegar, beet with Labneh and toasted pecans, the Coppa E Carciofini pizza with tomato, mozzarella, coppa, Taggiasche olives and artichoke “sotto olio,” and the Margherita with tomato, mozzarella, and wild oregano.

The restaurant's proximity to Agritopia means access to a plethora of local organic vegetables. Expect different kinds of rice, including sushi, brown, and black rice, and seafood dishes with shrimp and octopus.

Also on site will be a mini bakery and wine bar with tapas-style bites created to pair with a lineup of natural biodynamic wines. Customers on the go can visit the retail section and grab pantry goods, wines by the bottle, prepared foods, and other take-home-friendly items. Look for a wine club to launch in the near future. DJs and live musicians will round out the experience. 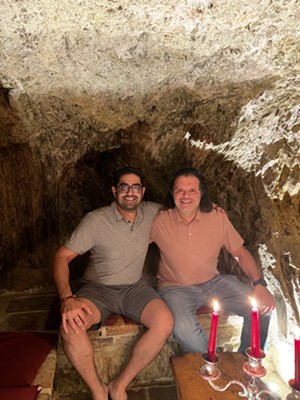 Sethi walked into the Arcadia Pa’La five years ago and was immediately blown away by the simplicity of the dishes and Urciuoli’s wood-fired concept. After talking, they realized they shared the same organic, ethical, food, and sustainability philosophies and sense of responsibility to their customers. A friendship formed.

Sethi lives in Gilbert and introduced Urciuoli, who lives in Arcadia, to his part of town. Urciuoli loved the energy and atmosphere and they both saw the possibilities. The seeds for Source were planted.

And, it didn’t take long for Urciuoli to bond with Agritopia visionary Joe Johnston over their mutual passion for Vespas.

Sethi says he would have never considered this venture with anyone else.

“Food is the most intimate relationship with somebody you can have because they are going to consume it. And it’s a stranger,” Sethi says. “It’s important to have a partnership with someone who speaks the same language, who understands it.”

Sethi accompanied Urciuoli on his trip to Italy this summer. After meeting his family and friends, everything he felt about his friend-turned-business partner was confirmed, Sethi says.

“I’m from India and Italian families are like Indian families, really tight. The warm feeling, authentic welcome, it confirmed everything I knew about him,” Sethi says, recalling their visit to the olive oil and farro farms.

“I have a new respect for farmers. We went to the source,” Sethi says, chuckling at the unintentional pun. 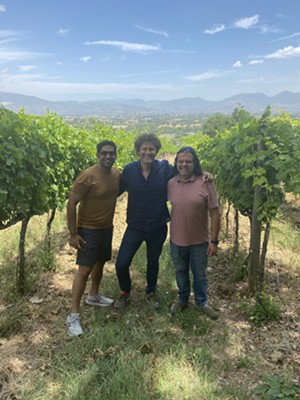 Source founders Akshat Sethi (left) and Claudio Urciuoli (right) visit Urciuoli's friend and winemaker Lorenzo Mattoni at his vineyard in Umbria. Source will carry a number of natural wines from Italy in the restaurant and retail shop.
Courtesy of Source
Urciuoli was raised in the Liguria region along the Mediterranean coastline and he travels home annually. However, his family visits were put on hold during the pandemic. This summer was his first time seeing his mother, sister, and extended family since strict policies were put in place to stop the spread of the coronavirus.

But the influence of his family and culture is part of everything the chef does. Growing up, Urciuoli’s grandmother had a grocery store. His father sold flour and the young chef often accompanied him on sales jobs.

“I was always excited to go to the bakeries because of the smell,” Urciuoli says.

Afternoons were spent doing homework in the kitchen while his mother, grandmother, or aunt prepared supper. He often helped with chopping and making gnocchi or pizza dough.

“I grew up with pretty good food. Cooking was second nature,” he says.

Urciuoli opted for vocational school, which gave him a formal cooking education and the opportunity to make money at a young age. Friends talked about good career options in the U.S. so he made the move at 19.

Landing a position at the Four Seasons in Newport Beach, California, was a huge turning point, the chef says. He started as a line cook and then moved up the ranks.

“I paid $325 for a studio apartment. There was no kitchen, it was tiny but enough for me. I was always excited to go to work,” Urciuoli says.

He went on to helm restaurants in luxury hotels across the country. That led him to Arizona in 2006, where Kimpton Hotels sent him to open the former Taggia at Firesky resort in Scottsdale. Then, the Montelucia enlisted his expertise in opening its fine dining signature Mediterranean restaurant Prado. The original location of Pa'La serves fresh sandwiches on a shade-dappled patio.
Tirion Morris
Marriage and children inspired him to adopt a less nomadic and work-consuming lifestyle. Opening his own restaurants became the right fit, he says.

“Having three kids and a family, for me, it’s the natural thing to do,” he says.

Urciuoli’s schedule grants him the time to create recipes, something he misses when daily operations demand his attention. He also likes spending time with his team, meeting people, and doing new things that spark new ideas.

“With cooking, you have to be very creative and look at the seasons and give something new to the guest,” he says.

But it’s not just about presenting a pretty plate. What drives Urciuoli is an intangible beauty that’s achieved through the best ingredients and reaching those who eat his food in a place beyond their palates.

“I like to let the ingredients speak, do their own things, and deliver that to the guests,” he says. “For me, food has always been about human connection.”

Scheduled to open in September
3150 E. Ray Road, Gilbert
eatatsource.com
KEEP PHOENIX NEW TIMES FREE... Since we started Phoenix New Times, it has been defined as the free, independent voice of Phoenix, and we'd like to keep it that way. With local media under siege, it's more important than ever for us to rally support behind funding our local journalism. You can help by participating in our "I Support" program, allowing us to keep offering readers access to our incisive coverage of local news, food and culture with no paywalls.
Make a one-time donation today for as little as $1.
Georgann Yara is a freelance writer and former newspaper reporter who's also a proud equal opportunity eater. She loves all things Arizona, including the professional sports teams that continue to break her heart. Food, cocktails and cats dominate her IG.
Contact: Georgann Yara
Follow:
Twitter: @georgannyara
Instagram: @georganny/