Three Phoenix chefs talk Anthony Bourdain, who died June 8, 2018. Craig Barritt/Getty Images
On June 8, 2018, the world woke to the news that Anthony Bourdain had died. Now, a year after Bourdain’s suicide, his fans are left with his profound words, his stirring television series, and some difficult questions that may forever remain unanswered.

Bourdain’s career shifted after the success of his first book, Kitchen Confidential, in 2000. His post-cooking career as a writing, wandering, culinary contrarian seemed like a natural progression. He veered toward sociology, politics, and history. He started stepping away from stories on a chef's life and the “culinary underbelly” to focus on people. Food, however, was always the vehicle, the key that let him through the door.

He found endless amounts of love radiating from dinner tables around the world. Watching Bourdain was a reminder of how food is synonymous with culture, representing the faces and legacies of the people who've prepared it for generations.

Vibber is head chef at Cartwright’s Modern Cuisine in Cave Creek, an Arizonan who spent years traveling and cooking in places like Italy and Panama City. Vibber has experienced the world as a food-obsessed wanderer — a perfect person with whom to talk Bourdain.

Sanz hails from Nogales, Mexico, and a family well-versed in the restaurant business. She grew up watching her grandmother cook in their family restaurant. Since, she's made an impression on the Valley's culinary scene thanks to her time at Sanctuary Camelback Mountain Resort and Virtu Honest Craft.

Nick LaRosa, fresh off a victory from Food Network's Chopped, is a partner and executive chef at Blueprint Hospitality Group — under which Nook Kitchen, The Bar, and Dilly Dally are run.

Via email, here's what they said about Bourdain's legacy.

Chef Samantha Sanz of Talavera
Talavera
What was Bourdain's greatest lesson to the world?

Vibber: Anthony Bourdain’s greatest lesson to the world was to be inclusive. In kitchens, we work with different cultures and races. Religion and sexual orientation do not play a role in our line of work. Best person for the job wins all the time. I have learned so much about others in kitchens. Never judge a book by its cover!

Sanz: To be fearless when it comes to trying cuisine of different cultures, opening [up] to not just the food itself [but] to the culture.

LaRosa: Anthony’s greatest lesson to the world was that passion, love, excellence, and dedication to the craft is present in the smallest pockets of the world and can’t be ignored. Seek them out and enjoy every moment you have in life. His outspoken manner, devilish sarcasm, and blunt approach to food and worldly issues paved the way for kitchen misfits everywhere.

Chef Nick LaRosa of Nook Kitchen
Blueprint Hospitality Group
If you had the chance to take Bourdain to any Phoenix restaurant, where would it be and why?

Vibber: If I were to take Anthony anywhere to eat I would hope he has already eaten at Cartwright’s! Otherwise I would have to take him to Cotton & Copper. Tamara Stanger is Arizona food culture. We have similar outlooks on wild and native cuisine.

Sanz: I would take him on a road trip to my grandma's restaurant in Nogales, but if we have to stay in Phoenix, I would say Ghost Ranch, FnB, Tratto, and Talavera. Talavera so I can cook for him. Ghost Ranch is a great interpretation of Southwestern cuisine, exploring the flavors of Sonora, Arizona, New Mexico, and Texas. FnB because Charleen Badman uses all local products and takes a lot of pride in Arizona — including the [Arizonan] wine list. Tratto makes you feel as if you [were] transported somewhere else. The simplicity of the food and design of the restaurant makes you feel like you’re eating at your Italian grandma’s house. Simple and delicious.

LaRosa: I would take Anthony to my restaurant, Nook Kitchen. I would want him to see what we do in the FOH and BOH, to appreciate the time and effort we put in without buying ratings. We are a true underdog striving for success! For him to see the passion and dedication we have for this industry, and the food and service we provide, would have meant the world to me.

If you'd had the chance to prepare one meal for Anthony, what would it have been and why?

Vibber: If I had the chance to cook one meal for Bourdain it would be our Arizona Omakase. My greatest hope is that our tasting menu tells not only the story of Arizona food but also of our past and current culture, and all the people who help us create such amazing food!

Sanz: Paella over an open fire or mole. They both represent my heritage and my culture, and I’d like for him to be immersed in who I am as a chef and where my family comes from.

LaRosa: To be honest, I don’t have a signature dish. I’m pretty versatile, I like clean simple flavors and let the food speak for itself. I would ask Anthony what he was in the mood for and go from there. I’ll tell you that it would have been epic!

Outside of the food world, what current issue would you be most interested to hear Bourdain comment on?

Vibber: I suppose it would have to center around our current state of affairs in America. I appreciate listening to anyone that is older than me and intelligent. Wisdom is a valuable tool. In this day and age I think we are too quick to try to find one problem to blame everything on. I think we have a lot of things we could change about ourselves if we listened more than we spoke.

Sanz: I would like to hear him talk not only about the great differences but also the commonalities of the American people and the current political climate.

LaRosa: I think the recent abortion laws passed in parts of this country would have struck a nerve with Anthony. One can only imagine what his comments would have been.

Vibber: I have been fortunate enough to have cooked professionally since I was a teenager. However, I do remember the moment that I decided this would be my life. I do not remember what show was on but it was the beginning of the Food Network and I remember standing in my girlfriend's apartment and people watching the show saying how amazing the chefs were.

I thought to myself that they all looked and sounded like total assholes. I was a better chef than they ever would be. They weren’t chasing the passion, they were chasing the bright lights and big paychecks. I vowed in that moment to become the best chef I could be. On my own terms. My own way.

It took a long time and nothing has ever come easy in this business. I wouldn’t trade it for anything, and I am going to keep kicking ass until the day I drop.

Sanz: It wasn’t just one moment. I was in high school, and I was baking and cooking a lot and having friends over to eat. I realized how happy it made me to cook for the people around me. That’s when I knew.

LaRosa: My story is not as cool as Anthony’s. I have always known I wanted to cook. As a child, I was told that I have a natural talent and should pursue it. In the kitchen is where I feel the most comfortable and can express my feelings.
KEEP PHOENIX NEW TIMES FREE... Since we started Phoenix New Times, it has been defined as the free, independent voice of Phoenix, and we'd like to keep it that way. With local media under siege, it's more important than ever for us to rally support behind funding our local journalism. You can help by participating in our "I Support" program, allowing us to keep offering readers access to our incisive coverage of local news, food and culture with no paywalls.
Make a one-time donation today for as little as $1. 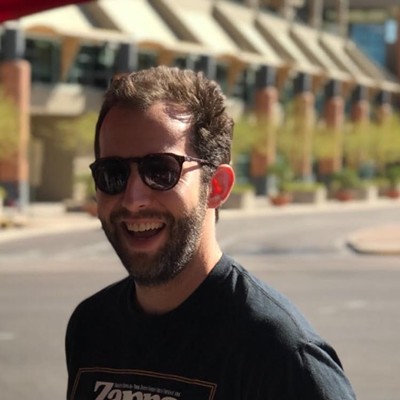