First Taste: The Uncommon is a Fun, Retro Restaurant with Serious Culinary Chops A lounge area with neon-lit corrugated metal pods and pinball machines set a vintage vibe. Geri Koeppel
When a new spot opens in town, we're eager to check it out, let you know our initial impressions, share a few photos, and dish about some menu items. First Taste, as the name implies, is not a full-blown review, but instead, a peek inside restaurants that have just opened — an occasion to sample a few items and satisfy curiosities (both yours and ours).

The Uncommon in downtown Chandler, which opened in July, is a retro paradise for anyone who grew up in the 1970s to '90s or loves the aesthetic.

Nostalgia abounds, from the neon Rubik’s Cube wall art when you enter to the vintage arcade games, old movie posters, and a DJ spinning everything from KISS to the Beastie Boys.

The menu is peppered with references like the sandwich named Sloane Peterson (she was Ferris Bueller’s girlfriend, of course). There’s even a bartender with his hair shaved above the ears in a sort of fauxhawk mullet, wearing a 1980s-vibe dangling earring. Love it.

But just as an old commercial asked, “Is it live, or is it Memorex?” the question here is: “Is it a gimmick, or is it bona fide?”

The Uncommon shares a building, kitchen, and bathrooms with adjacent boozy brunch eatery Tipsy Egg on the prominent corner of Arizona Avenue and Boston Street. It took the place of the former Modern Margarita and La Bocca, which suffered a kitchen fire in November 2017 and closed permanently. Pinball, Skee-Ball, foosball, video games, and retro music are part of the entertainment at The Uncommon.
Geri Koeppel
Like its sister restaurant, Recreo, on San Marcos Plaza across the street, The Uncommon is all about merging eating and entertainment. Three rooms house pinball, tabletop shuffleboard, video games, foosball, Skee-Ball, and a ton of memorabilia that will either take you back to your childhood or have you wondering, “What’s a Simon?” 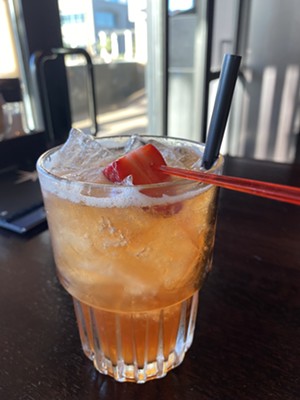 Itsa Meeee Mario is made with Bulleit Rye whiskey and strawberry.
Geri Koeppel
As fun as all this is, The Uncommon also comes through with some serious cocktails and culinary chops. A recent visit began with a couple of throwback-named drinks: the Itsa Meeee Mario, with Bulleit Rye whiskey, Amaro, strawberry, lemon juice, and soda water ($12), and the Wendy Peffercorn ($11), with Deep Eddy's lemon vodka, amaretto, and cranberry juice.

The Itsa Meeee Mario has luscious, caramel undertones gussied up with a fruity essence for a berry-filled drink that is both fun and still adult.

The Wendy Peffercorn is a golden-hued vixen in a coupe glass that’s reminiscent of a sweet Sidecar. Both are smooth and free of any alcohol bite, meaning they—like Tom Cruise’s Maverick—could easily take you right into the danger zone if you’re not careful.

What follows is an equally impressive adventure in culinary fusion. The server is enthusiastic about the beer cheese fonduta ($14), served with house-made naan, seasoned house-made potato chips, and a soft pretzel baguette. It also comes with a mini skewer with a cherry tomato and green apple wedges, so tiny it's basically a garnish.

The Swiss-meets-Rotel-inspired cheese dip quickly wipes out any disappointment in the skewer. It's creamy, mild, and smooth, and doesn’t turn off the non-beer lovers at the table. The only quibble is that the pretzel is tough and hardens quickly. The lamb meatballs are in a cumin-scented tomato sauce.
Geri Koeppel
Next up are the lamb meatballs ($15), three golf ball-sized spheres nestled in a slightly spicy tomato sauce with more than a hint of cumin. The dish is topped with gooey mozzarella, pistachios, and a whisper of cilantro, and comes with more of that delicate naan. These are far superior to most boring beef meatballs with marinara.

The “handhelds” section of the menu features burgers, fried chicken or fish sandwiches, a Reuben, Italian beef, and the like. A neighboring table ordered a couple, and the towering presentations looked promising.

The “notables,” or mains, include fish and chips, beef "strogie," and shrimp orecchiette. Porky’s Revenge ($20) is a breaded, deep-fried slab of pork tenderloin as big as your head topped with a perfectly poached egg—something any carnivorous Midwestern relatives will go bonkers over. The fryer oil might’ve needed changing because the breading was greasy and slightly hard, though the sauce alone is worth ordering this dish again. Porky's Revenge is a breaded pork tenderloin atop a decadent reduction.
Geri Koeppel
The menu says the pork tenderloin comes with “Japanese apple crisp curry,” but there were no detectable apple or curry flavors. Instead, the thick yet silky reduction is reminiscent of a classic pot roast dinner, complete with carrot chunks—a decadent, dark, deliciousness ideal for dredging.

The cauliflower tikka ($17), meanwhile, is ideal for vegetarians, anyone cutting back on meat, or anyone who simply loves a well-crafted curry.

The cauliflower tikka is buttery and fragrant.
Geri Koeppel
A buttery, fragrant sauce with tomato, onion, mushrooms and cashews hugged tender chunks of cauliflower dusted with chopped cilantro. The entree came with a side of Forbidden black rice which was a tad gummy, but not a deal-breaker, and even more naan, which never grew boring.

On top of the circus of spices, the service was impeccable. The manager, Nick Kadlec, stopped by to joke and banter throughout the meal, making sure to mention the selfie-friendly mirrored restroom.

Zoltar Speaks is part of the nostalgic memorabilia.
Geri Koeppel
When it all wound down, the bills came in old DVD cases featuring films like Porky's, Hercules, and The Mask.

The only major letdown of the evening was not saving room for something sweet. Right at the top, the menu urges diners to  “Dessert First," but our party failed to heed the call to action and was too full to try the chèvre cheesecake, OMFG brownies, or warm bread pudding.

On the upside, as one of everyone’s favorite movie lines from the ‘80s goes, “I’ll be back."

1 East Boston Street, Chandler
480-801-9901
uncommonchandler.com
KEEP PHOENIX NEW TIMES FREE... Since we started Phoenix New Times, it has been defined as the free, independent voice of Phoenix, and we'd like to keep it that way. With local media under siege, it's more important than ever for us to rally support behind funding our local journalism. You can help by participating in our "I Support" program, allowing us to keep offering readers access to our incisive coverage of local news, food and culture with no paywalls.
Make a one-time donation today for as little as $1.
Geri Koeppel is a professional writer, voracious reader, devoted traveler, and an amateur cook, wine drinker, birder and tennis player. She's lived and worked in Detroit, San Francisco, and Phoenix.
Contact: Geri Koeppel
Follow:
Twitter: @GeriKoeppel
Instagram: @gerikoeppel/