Bar Flies: How Drinks and Stories in Downtown Phoenix Turned Into a New Book

Katie Bravo (left) and Amy Silverman co-curate the Bar Flies storytelling series. Deanne Dent
The bar fell nearly silent the night Katie Bravo stood center stage at Crescent Ballroom, recounting the time her father suggested she jump off the rooftop into his arms. For some, it conjured memories of childhood adventures. For others, it teased out early trauma.

People take different things from stories, depending on their perspective and life experience. It’s a phenomenon that’s fueled the rise of storytelling in recent years, pulling diverse community members out of their digital isolationism into shared moments of memory and dreams.

Today, Bravo co-curates a storytelling series called Bar Flies with Amy Silverman. (Full disclosure: Silverman was managing editor for Phoenix New Times when they launched Bar Flies and is the spouse of the paper's interim editor, Ray Stern. Several of the people who’ve done Bar Flies readings are connected to the paper.)

More importantly, Bar Flies participants represent a broad swath of locals who share a keen interest in literature, stories, and community. Some, including more than a dozen people who’ll be reading their work during a December 17 holiday event called Bar Flies: Eating Christmas, like telling their stories.

Levy heads Stateside Presents, and operates a trio of venues where Bar Flies readings have been held in recent years. Eating Christmas started at Crescent Ballroom in 2012. Later, it gave rise to the monthly Bar Flies series. Today, Bar Flies packs in the crowds at Valley Bar, where Levy is one of its biggest fans.

“I was astonished the first time I saw Eating Christmas at Crescent Ballroom,” Levy says. “I was amazed at how great the stories were and how many talented writers live in this area.”

Bar Flies started back in 2015 after Tania Katan stopped doing her Lit Lounge at Scottsdale Museum of Contemporary Art. “She was in our first show,” recalls Bravo. Early on, Bravo and Silverman envisioned individual events, rather than a storytelling series. But a chance encounter changed all that. 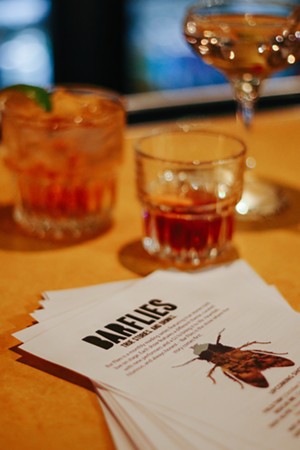 Drinks pair well with live storytelling.
Evie Carpenter
One day Levy ran into Bravo at Phoenix Public Market and suggested the series approach after they started chatting. “I was like, Katie, this should happen all the time — not once a year,” he recalls. Bravo ran the idea past Silverman, and they were off and running.

It’s one of several storytelling events in the Valley. Each one has a different feel, Bravo says. And the organizers are supportive of each other’s work. “Bar Flies isn’t improv, poetry, or open mic,” she says. That’s part of what makes it unique.

Every Bar Flies features five people sharing stories they’ve written ahead of time. Some are experienced writers. More often, they’re people who simply have something to say and want a welcoming place to say it. The pieces run about 1,500 words each.

Levy has a long list of memorable Bar Flies moments, including the time he was heading out the door, running late for something. “I remember listening to Jennifer Longdon’s story, and I just couldn’t leave.” He calls Laurie Notaro one of the funniest people in the house. “Every time Laurie tells a story, there’s a party in the house.” As for Bravo’s stories of her dad? Levy calls them “jaw-dropping moments.”

For Levy, part of the appeal is the way the series reaches people across different generations. “My parents go, and I go, and people younger than me go,” he says.

Periodically, Bar Flies holds all-day, page-to-stage workshops at Changing Hands Bookstore. It’s a way for people to craft and workshop their ideas in a group setting, then tell their stories that same night on the Bar Flies stage. People pay to take the workshop, but it’s not required for Bar Flies readers.

The release party happens December 17 at The Van Buren.
Amy Silverman/Katie Bravo
Silverman and Bravo are taking storytelling to a whole new level this month with the launch of a book called Bar Flies: True Stories from the Early Years. It’s being released during the Bar Flies: Eating Christmas event at The Van Buren. Everyone who buys an event ticket gets a book, which includes 60 stories told during the first four seasons of Bar Flies.

Most are experienced Bar Flies readers, and they’ll be telling fresh tales that top out at 500 words. Some tackle Christmas, but other holidays are also part of the mix. Topics range from implants to evangelical babysitters. Even Peeps and deviled eggs will get their five minutes of fame.

If they arrive early, ticketholders can mingle with storytellers featured in the book. Several will be on hand to sign copies that night.

Levy had a hand in birthing the book, as well. “Charlie suggested we do the book, and he’s supported us through the whole process,” Bravo says.

Essays are organized by topic, with sections dedicated to love, music, family, belief, adventure, self, holidays, and goodbye.

Several of the authors are well-known creatives — such as Kathy Cano-Murillo, Cindy Dach, Julie Fournier, Robert Isenberg, and Papay Solomon.

Silverman and Bravo have their own creative impulses, which they’re channeling in some new ways. Recently, they launched an enterprise called Fly Paper with Sussman, which will bring several creative projects under one umbrella.

Even so, it’s the stories that Levy finds most intriguing.

Odds are, he’ll never join the lineup. “I never go on stage,” he says. “I’m terrified on stage.” Instead, he praises the people who’ve been making it all happen.

“It’s all about Katie and Amy just going out there and doing really good work,” he says. “Move over, David Sedaris.”

Bar Flies: Eating Christmas is scheduled for Tuesday, December 17, at 7 p.m. at The Van Buren. Tickets are $20 in advance or $23 at the door. Every ticket includes a copy of the Bar Flies book and admission to the preshow Paper Mart at 5 p.m. Visit barflies.org.

Editor's note: This article has been update to show that Deborah Sussman is also with Fly Paper.
KEEP PHOENIX NEW TIMES FREE... Since we started Phoenix New Times, it has been defined as the free, independent voice of Phoenix, and we'd like to keep it that way. With local media under siege, it's more important than ever for us to rally support behind funding our local journalism. You can help by participating in our "I Support" program, allowing us to keep offering readers access to our incisive coverage of local news, food and culture with no paywalls.
Make a one-time donation today for as little as $1.