All smiles at The Blunt Club Benjamin Leatherman
The weekend has arrived. This weekend, you can celebrate ska music during a screening of Pick It Up! Ska in the ’90s, drink up at The Van Beer’n Indoor Beer Festival, inky your body at the Hell City Tattoo Fest, or stuff your face with stacks of pancakes during Joseph and Stacy’s Third Annual Pancake Breakfast. For more things to do, visit New Times’ calendar. 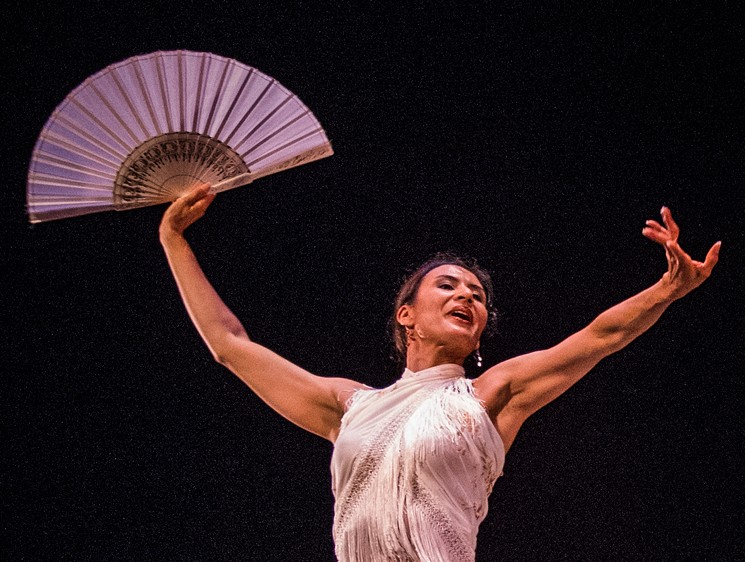 If dance styles were beverages, flamenco would be the energy drink. It’s a stunning marriage of music and movement, as evidenced by musician Chris Jácome and choreographer Lena Jácome. Based here in the Valley, Jácome Flamenco have performed on national and international stages. But you can see them right here, at Chandler Center for the Arts, 250 North Arizona Avenue, Chandler. The creative couple’s Sol y Luna, featuring flamenco dancers performing to live music and song, is part of the center’s free summer concert series. Check it out at 7:30 p.m. on Friday, August 23. Doors open one hour before showtime, so arrive early to snag the best seat. Lynn Trimble

So much ska.
Courtesy of the film

Ska was the unsung hero of the ’90s. Bands like The Mighty Mighty Bosstones made their way into the Top 40 and even had a cameo in Clueless. The genre is as underappreciated as Tai being her authentic self. Pick It Up! Ska in the ’90s celebrates the third wave of ska with bands like Reel Big Fish, Streetlight Manifesto, and Catch 22. The documentary focuses on the do-it-yourself nature of the genre and features interviews with all the aforementioned bands as well as Blink-182 and No Doubt. Get ready for some skanking, because the movie will be shown at FilmBar, 815 North Second Street on Friday, August 23 at 8 p.m. Tickets are $10. Melissa Fossum

Get ready for a good time.
QueerGirl

Phoenix is a great spot for LGBTQ nightlife, but it’s a bit of a boy’s club. Those who are female-identifying are welcome in the hot spots that fall under the large, all-encompassing umbrella of “gay bar” in Phoenix, but it would be nice to have more spaces that are specifically tailored to them.

Fortunately, QueerGirl is changing that up by touring the nation and hosting high-energy events that are specifically tailored toward queer women. Javin, of Power 98.3 and Pitbull’s Globalization Radio on Sirius XM fame, is the DJ selected for the event. Dance the night away during the QueerGirl Summer Party. The fun goes from 9 p.m. to 2 a.m on Friday, August 23, at The Rock, 4129 North Seventh Avenue. This 21-and-over event is $15. Melissa Fossum

Getting a great tattoo vibe from this art spotted at Lulubell Toy Bodega.
Lynn Trimble

Odds are, you associate the Arizona Biltmore, 2400 East Missouri Avenue, with traditional afternoon tea or playing a game of giant chess on a lush green lawn. Turns out, it’s also home to tattoo culture, for those who attend the Hell City Tattoo Fest. The three-day event kicks off on Friday, August 23. A one-day pass for Friday costs $25. The festival line-up includes tattoo competitions, live music, burlesque, comedy, and more. Organizers expect hundreds of tattoo artists from around the world to descend on the event, which means you can finally drink that cup of tea without having to worry about extending your pinky while you sip. Lynn Trimble

A word to the wise: Don’t sleep on Phoenix Rising Football Club, the Valley’s United Soccer League team. The squad is currently in the home stretch of its biggest season ever and is sitting atop the USL’s western conference standings after riding a lengthy winning streak this year (13 games, to be exact, as of this writing).

The Rising have also attracted a substantial number of fans and followers who pack the stands at Casino Arizona Field, 751 North McClintock Drive in Scottsdale, during every home game. And they’re likely to be out in droves on Friday, August 23, when Phoenix Rising FC battle Sacramento Republic FC in what should be an action-packed game. Kickoff is at 7:30 p.m. and admission is $20-$43. Benjamin Leatherman

Most kids will lament that they can’t wait to grow up at one point or another. Being a grownup has its perks, but ultimately, things get a lot more complicated once you reach adulthood. Whether you’re a responsible adult or one in age only, we all have to deal with growing pains. The Storyline SLAM will tackle the theme of adulting with 10 pre-selected storytellers telling short stories before a panel of judges.

The highest scoring storyteller wins a $30 prize. Listen up, The Storyline SLAM returns to The Newton, 300 West Camelback Road, on Friday, August 23, at 7 p.m. Tickets are $6 online and $8 at the door. Melissa Fossum

Enter here for the Phoenix Center for the Arts open house.
Lynn Trimble

Phoenix Center for the Arts

You’ve probably passed by Phoenix Center for the Arts countless times on your way to festivals at Hance Park or First Fridays in Roosevelt Row. If you’ve never popped in to see what the center has to offer, stop by during the free open house happening from 9 a.m. to 1 p.m. on Saturday, August 24. The center is located at 1202 North Third Street, and it’s easy to spot — thanks to a colorful mural that raises awareness about poverty. The center is offering free art and dance workshops for family members of all ages. Talk about rolling out the welcome mat. Lynn Trimble Ever feel like your friends or family don’t fully appreciate your massive brain power when it comes to video games? It’s game on at Bookmans Entertainment Exchange Mesa, 1056 South Country Club Drive in Mesa, where geeks will rule during the Video Game Game Show happening from 2 to 4 p.m. on Saturday, August 24. Teams of four will be competing, answering trivia questions with a hefty dose of audio and visual clues. The family-friendly event includes three rounds, and each round likely will last 20 to 40 minutes. You don’t know what you don’t know, so this is a fun way to up your video game I.Q. while meeting fellow game connoisseurs. Lynn Trimble

Hip-Hop has exploded in popularity over the last few years, and its influence is everywhere, from Kendrick Lamar winning the Pulitzer Prize to Beyoncé and Donald Glover starring in The Lion King reboot (well, their voices, but you get our point). Yeezy’s sneakers are still a hot commodity that sell out in minutes. The rest of the world may (finally) be catching on to hip-hop’s awesomeness, but it’s nothing new for the Valley’s longest running hip-hop night, The Blunt Club.

Get into the groove during The Blunt Club’s 17-Year Anniversary at Crescent Ballroom, 308 North Second Avenue, on Saturday, August 24, from 10 p.m. to 2 a.m. This free 21-and-over event includes a live performance by The Stakes and resident DJs Pickster One, M2, Tricky T, Fact135 and Melo. Melissa Fossum

Beer me.
The Van Buren

The heat and craft beer are woven into Arizona’s cultural history like a delicious, hoppy refreshment. Thankfully, The Van Beer’n Indoor Beer Festival removes the heat from the equation with a two-day celebration that features over 30 breweries, including Modern Times Beer, Odell Brewing Company, Deschutes Brewery, and Elysian Brewing Company. Saturday features live music from Oh Allen The DJ and Kim E. Fresh, with Dr. Delicious and Hi-Dreams Collective rounding out the Sunday lineup.

Summertime favorites will be grilled up during the patio BBQ. Drink up at The Van Buren, 401 West Van Buren Street, on Saturday, August 24 from 7 p.m. to 12 a.m., and Sunday, August 25 from noon to 5 p.m. Admission to this 21-and-over event is free, and tasting tickets start at $12. Melissa Fossum

If you think ballet is all about tutus and floating across the stage, you’re not spending enough time at Ballet Arizona performances blending artistry with athleticism. Get to know your local ballet company by attending the free Ballet Arizona Fan Fest, taking place from 1 to 4 p.m. on Sunday, August 25. It’s happening at 2836 East Washington Street, where you can meet the dancers, take mini dance classes, try a freeze-dance competition, tour the facility, and check out the selfie station. If all that dance makes you hungry, hit a selection of local food trucks. Register in advance if you want to get a better place in line. Lynn Trimble

Admit it. Eating stacks of pancakes is one of your superpowers, right? You’ll fit right in at Stacy’s at Melrose, 4343 North Seventh Avenue. That’s where Joseph and Stacy’s Third Annual Pancake Breakfast takes place from 10 a.m. to 1 p.m. on Sunday, August 25. For $25, you get all-you-can-eat pancakes and sausage, plus BoSa donuts and other treats.

Bring money for the Bloody Mary bar and the auction. Proceeds benefit the Phoenix Pride Fund, which makes grants to various nonprofits focused on LGBTQ community members. You have to be at least 21 to attend, and buy your tickets online in advance. Lynn Trimble

They have a full tank of gas, half a pack of cigarettes, and they’re wearing sunglasses. Hit it, because the legendary duo of John Belushi and Dan Aykroyd are on a mission from God to save their boarding school in The Blues Brothers. In this iconic flick, the duo is fresh out of prison and gets their band back together to pay the school’s $5,000 back property taxes. The Blues Brothers Lagunitas Beer Dinner features unique menu items such as “The Soup is Fucking Ten Dollars,” “Fried Chicken & Rubber Biscuit,” and “Orange Whip? Orange Whip? Orange Whip?” Take a ride in the Bluesmobile at Alamo Drafthouse at 1140 East Baseline Road in Tempe on Sunday, August 25, at 3 p.m. Melissa Fossum
KEEP PHOENIX NEW TIMES FREE... Since we started Phoenix New Times, it has been defined as the free, independent voice of Phoenix, and we'd like to keep it that way. With local media under siege, it's more important than ever for us to rally support behind funding our local journalism. You can help by participating in our "I Support" program, allowing us to keep offering readers access to our incisive coverage of local news, food and culture with no paywalls.
Make a one-time donation today for as little as $1.
Melissa Fossum
Contact: Melissa Fossum