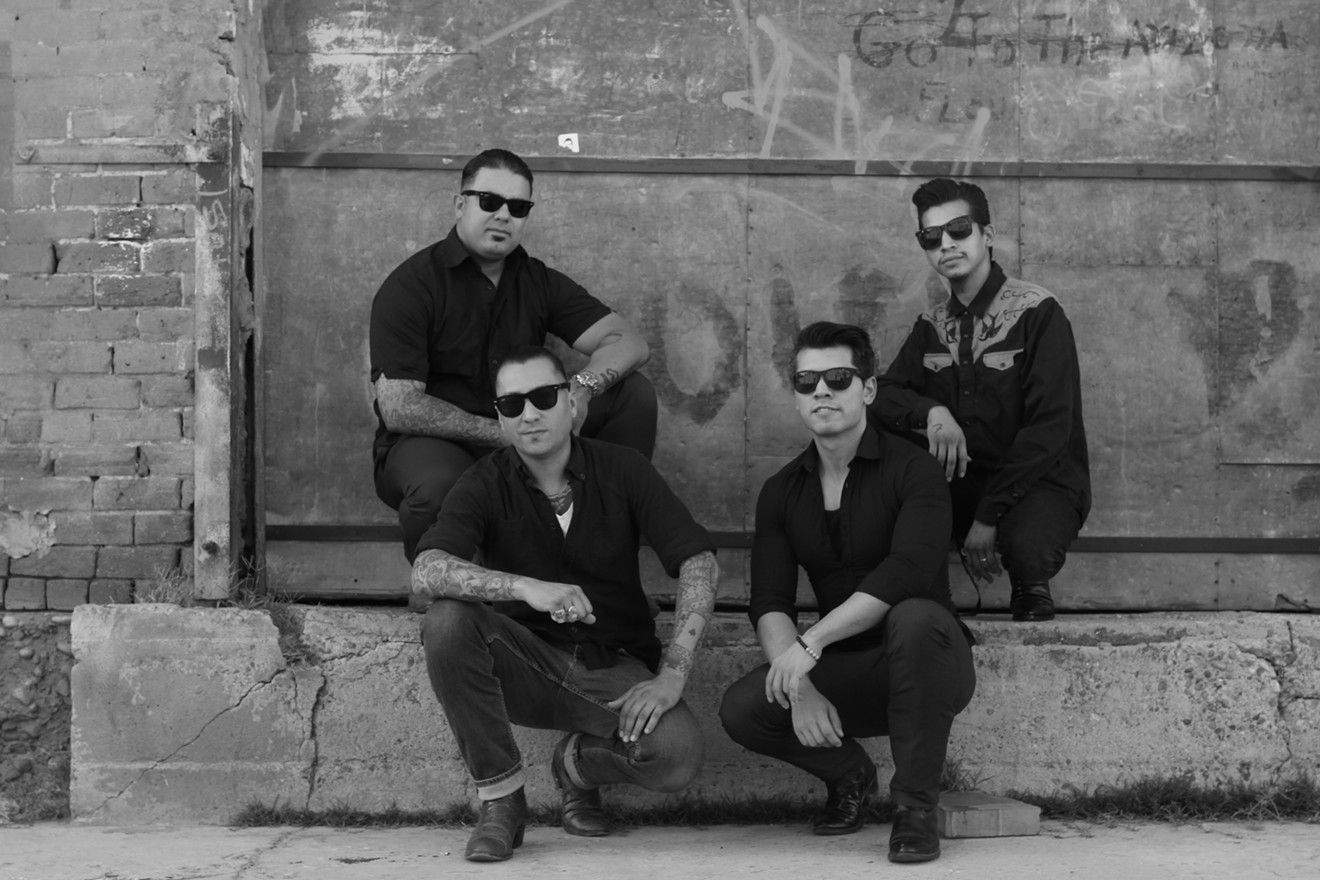 In June, the quartet played a set at Crescent Ballroom during a semi-regular event for the local Rockstar Wrestling Alliance. Between all the arm drags and DDTs, the band played its hybrid blend of cumbia, spinning in snarling punk and breezy reggae for a different kind of dance music beast.

Given their sheer passion and precision, I was left floored — not unlike after receiving a brainbuster — when drummer/leader Rafa Calaka told me recently how long they'd been together.

"It'll be a year in September," he says. "We just rehearse five or six days out of the week, usually for five or six hours."

Calaka has always maintained that strong work ethic. He learned drums at the age of 9 from his father, who played in several regional Mexican bands. Calaka says he came up with this "new" sound a few years back, but never got support from his collaborators.

"Nobody really saw it," he says. "Most guys are more interested in making money playing casinos. [In cumbia], people who try new things get their hands slapped and say, 'You can't do that.' Like, you're not supposed to hear snares, so I turned mine on."

To help bring his sound to life, Calaka recruited a few friends. First came his "brother" Cisco Carballo, who Calaka convinced to switch from guitar to bass. Then came singer Javi Pimental, who worked mostly as a photographer before Calaka persuaded him to serve as charismatic frontman. Finally, there was guitarist Vic Tellez, who had zero experience in cumbia before Calaka pulled him away from a series of punk and rockabilly bands.

"My dad's always been like this," Calaka says of their shared persuasive skills. "He's always been able to say to people, 'You should try and do this.'"

If he sounds like a taskmaster, Calaka says he's much more the "middleman." He's trying to foster a deeply collaborative spirit.


So far, the approach has worked, and Las Calakas has been steadily playing shows statewide over the last year or so. Much of that success is in how crowds react to their music, something Calaka feels is more elemental than technical.

"My family first heard this and they were like, 'What the hell is that?'" he says. "But then, they heard the drums and they liked it. If I broke down what I was doing on a technical level, no one might get it. But it's just dance music. We're breaking a million rules, but what we do is organic, it's the way we feel."

Ultimately, Calaka says they're trying to use their music to reach out to other Latino artists, those bands who may be afraid to break new barriers in fear of losing paying gigs.

"Whatever happens, I hope we inspire people," Calaka says. "There are some really great musicians [in Arizona] who have spent years practicing just to step into the shoes of someone else. They need a reason and a purpose to create something new."

That means Las Calakas will keep on playing, including the next lucha libre event on August 23 at The Van Buren. That night, the band will unveil their music video for "Baile De Las Calakas," which was shot downtown and celebrates "Chicano culture and all we represent in Arizona." That includes the lucha libre angle, which Calaka insists is quite fitting for the band.

"Lucha libre and our music go perfect together," he says. "Luchadores aren't much different from artists, and they have to put in practice. I've (also) spent many years fighting."

Las Calakas are scheduled to perform Friday, August 23, at The Van Buren. Tickets are $15 to $27 via TicketWeb.
KEEP PHOENIX NEW TIMES FREE... Since we started Phoenix New Times, it has been defined as the free, independent voice of Phoenix, and we'd like to keep it that way. With local media under siege, it's more important than ever for us to rally support behind funding our local journalism. You can help by participating in our "I Support" program, allowing us to keep offering readers access to our incisive coverage of local news, food and culture with no paywalls.
Make a one-time donation today for as little as $1.
Chris Coplan has been a professional writer since the 2010s, having started his professional career at Consequence of Sound. Since then, he's also been published with TIME, Complex, and other outlets. He lives in Central Phoenix with his fiancee, a dumb but lovable dog, and two bossy cats.
Contact: Chris Coplan
Follow:
Twitter: @CCoplan