These Are the 10 Best Breweries in Metro Phoenix Try Greenwood Brewing's seasonal brews, like fall's Harvest Diem Spiced Ale served with a honey and cinnamon sugar rim. Tirion Morris
Whether you crack open a can or saddle up to a bar and order a pint, there’s nothing quite like enjoying a cold beer after a long day. And it's even better when that beer was made right in your neighborhood.

Arizona is home to around 100 breweries across the state, and the number of destinations where local homebrewers-turned-tastemakers are creating top-notch beers continues to grow. Shiny fermentation tanks, bready aromas, and seasonal sips abound at craft beer destinations around the Valley. Here are our top 10 picks for the best breweries in metro Phoenix.

1611 West Whispering Wind Drive, #7
623-277-0526
Walking into Front Pourch Brewing feels something like stepping onto a modern country-western movie set. A large wooden facade rises like a storefront behind the bar. Walls are covered in corrugated metal. Wooden barrels serve as light shades, patio lights are strung overhead, and a white picket fence edges the room. It’s a large warehouselike space that, since opening in 2019, has been transformed successfully by its owners into a cozy and welcoming spot. Not to mention the beers here are delicious. In the summer, beat the heat with Chime Time, a blonde ale made with cherries and key limes. Come winter, try the S’mores Stout, made with a specialty graham cracker grain and cacao nibs. Food trucks often park outside to complete the experience at this family-run spot.

3608 North Scottsdale Road, Scottsdale
480-350-7305
5942 East Longbow Parkway, #105, Mesa
480-590-3215
Amid the hustle and bustle of Old Town Scottsdale, Goldwater Brewing Co. provides the perfect spot to slow down and sip on an expertly made craft beer. The original location debuted in Old Town in 2015. Then in 2020, the father-and-sons-owned business opened a second taproom in East Mesa, and now, it has a South Tempe spot in the works. That’s good news for many metro Phoenix beer drinkers, as the brewery’s hoppy IPAs, rich stouts, and refreshing lagers will soon be closer to home. For a true taste of Arizona, order the Desert Rose, a Kolsch-style beer brewed with bright pink Arizona prickly pear fruits, which impart a rosy hue on the sweet and satisfying sip. 1205 West Pierce Street
602-666-1617
Smoked baked potatoes may not be the first thing that comes to mind when thinking about craft beer. But at Grand Avenue Brewing Co., the owners know they’ve got something special on the menu. Now pair the dish with great beer, the eclectic vibe of Grand Avenue, and a 1940s-era warehouse, and you’ve got something truly unique. Try the Happy Jack Cream Ale for a smooth, creamy brew, or taste one of Grand Avenue's unique barrel-aged brews, strong ales, or barley wines. Funky art adorns the walls, live bands often fill the space with music, and there are plenty of board games to keep everyone happy at this welcoming and chill spot. 922 North Fifth Street
602-875-8577
Two large dog-friendly patios; a modern, chic taproom; and a location right on trendy Roosevelt Row: What more could you ask for? Great beer? It's got that too. Megan Greenwood opened her namesake Greenwood Brewing in Phoenix in 2020, and the craft beer destination quickly became celebrated as one of the few women-owned breweries to ever operate in the Valley. Over the past few years, it’s become a staple of the downtown drinking scene, in an area where concepts turn over frequently. Seasonal brews often appear on the menu. In the fall, be sure to try the Harvest Diem Spiced Ale, served with a honey and cinnamon sugar rim. The Rosemary IPA is a year-round offering that brings herbal notes to the table, or stick with the classic brew that helped this spot get off the ground, the Herstory Pale Ale, a crisp and refreshing sip. Multiple Locations
Husband and wife team Jeff and Leah Huss are possibly the most qualified craft-beer couple in the Valley. Leah graduated from the Scottsdale Culinary Institute and was a managing partner at Papago Brewing Co. for 14 years. Brewmaster Jeff holds a degree from the Siebel Institute of Technology, recognized as the top brewing school in the world, and previously worked as the head brewer at BJ’s Restaurant and Brewhouse in Chandler. The duo combined their years of craft beer knowledge to open Huss Brewing Co. in 2013. Now, cans of Huss beer are some of the most recognizable symbols of Arizona brewing. This craft brewery is one of the largest in the state, and the magic is made in a warehouse in Tempe before it's distributed in cans and kegs to grocery and liquor stores, taprooms, and restaurants around Arizona. In metro Phoenix, fans can sip on Papago Orange Blossom or Koffee Kolsh from a taproom at the Tempe brewery or at outposts in uptown and downtown Phoenix.

15651 West Roosevelt Street, Goodyear
623-249-5520
Whether you live in the West Valley or not, Saddle Mountain Brewing Co. and its award-winning beer are worth the drive. This Goodyear destination is both a brewery and full-service restaurant with pub classics like pretzels and wings and Southwest favorites such as Pork Chili Verde and fajitas. All pair well with the brewery’s craft beer creations, including Sun Scorched Kolsch and Moon Landing Milk Stout. Taildragger Clan-Destine, a Scottish-style ale, is the proud winner of five Great American Beer Festival medals, making this brew a must-try for beer fans in the Valley. 701 West Deer Valley Road #1
623-469-9199
Marshall Norris made a name for himself in the Arizona craft brewing scene as the head brewer at popular Tucson spot Borderlands Brewing Co. When he moved to Phoenix, he brought with him a passion for beer and an expertise for making it. Norris partnered with fellow Borderlands alum Matt Wright to open Simple Machine Brewing Co. in North Phoenix in 2019. The duo took a chance on an underserved area close to the Deer Valley Airport and have spearheaded a revitalization of the area, which is now home to multiple breweries. The sleek, modern taproom is the right amount of industrial yet cozy. It invites customers to come in, order a Laze West Coast IPA or a Cherry Vanilla Stout served on nitro, and enjoy the bright and comfortable space. Live music and food trucks rotate throughout the week, keeping the options fresh. 4056 East Washington Street
602-368-8402
East of downtown Phoenix, right along the light rail tracks, sits an old fire station. But instead of fire trucks and hoses, this brick building is packed with fermentation tanks and cans of beer. At Walter Station Brewery, pick a seat inside the high-ceilinged bar or outside on the patio and sip on a Baja Girl Blonde or a Just Be Nice American Amber. If it’s match day, this soccer-focused bar and restaurant brings it home with Winston’s British Bitter, and for those looking for a coffee boost, the Coffee & Cream Ale is smooth, creamy, and best served on tap. Pair a brew or a flight of beers with some of the excellent food options available. The meatball sub is hard to beat. 2125 North 24th Street
602-244-9184
Ask anyone in town about their favorite brewery, and you’ll probably hear the name Wren House Brewing Co. thrown around. This cult-favorite spot has a large following, and for good reason. It’s tucked into a cozy cottage on 24th Street that feels like a friend's living room. Tiny plastic dinosaurs dot the back of the bar. There’s a brewery cat named Gravy, and last but not least, the beer is excellent. Keep an eye out for rotating specials and seasonal drops that sell out quick, or saddle up to the wood-topped bar for a staple brew, such as the refreshing Valley Beer lager or the multi-award-winning IPA Spellbinder. 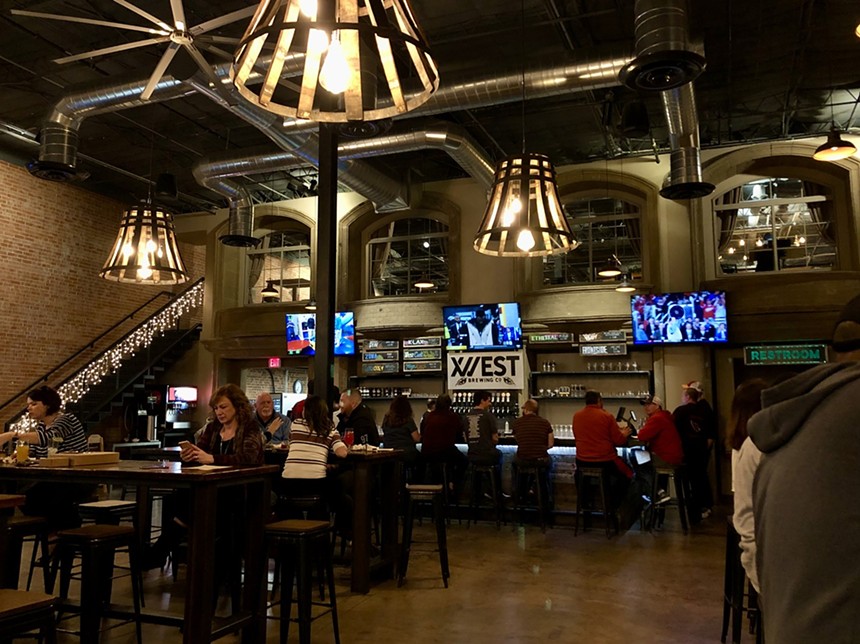 12 West Brewing in Mesa is a multilevel restaurant and bar.
Lauren Cusimano

From the outside, this storefront along Main Street in Mesa looks like a restaurant with a patio. What's unexpected is the cavernous space that opens up just inside the doors at 12 West Brewing Co. This two-story brewery feels reminiscent of an old-school beer hall, a space where the community gathers and slides steins down the bar. Service here is a little more refined than that, but the vibe is fun, casual, and craft. The space is a full-service restaurant, taproom, cocktail bar, and bottle shop all rolled into one. Order a BBQ Burger, fries, and a pint of Zona Pils for a classic brewery dinner, or switch things up a bit with an order of crispy fried pollack served with a dill and cucumber sauce and a Blap! Blap! blood orange brew. The Main Street restaurant opened in 2019 and is the second location of 12 West; the first is a small taproom, which opened in 2016, inside of Barnone at Agritopia in Gilbert.
KEEP PHOENIX NEW TIMES FREE... Since we started Phoenix New Times, it has been defined as the free, independent voice of Phoenix, and we'd like to keep it that way. With local media under siege, it's more important than ever for us to rally support behind funding our local journalism. You can help by participating in our "I Support" program, allowing us to keep offering readers access to our incisive coverage of local news, food and culture with no paywalls.
Make a one-time donation today for as little as $1.

Tirion Morris is the Food Editor at Phoenix New Times. Find her digging into all of the best restaurants and dishes in the Valley, from new spots to hidden gems. Food tip? Get in touch at [email protected]
Contact: Tirion Morris
Follow:
Twitter: @tirionmorris
Instagram: @tirionrose