The exterior of Medieval Times in Scottsdale. Benjamin Leatherman
We don't have to tell you it was a wild year in the metro Phoenix food and drink world, because you were clearly paying attention. We food writers hit the streets, and you readers hit the screens, following along as we announced restaurant openings and closings, ranked some White Claw, and called out a Burger King.

With that, here are the 10 most-read stories covering the Valley food scene in 2019.

"Now Open: Medieval Times in Scottsdale — Here's Everything You Need to Know"

By Benjamin Leatherman
Everything you need to know about the Valley's location of the Middle Ages-themed dinner theater, including showtimes, ticket info, birthday discounts, and more.

By Lauren Cusimano
Your good pals have the White Claw Hard Seltzer flavors power-ranked for your absolute convenience, just in time for the remainder of pool season.

By Steven Hsieh
A Burger King in Buckeye, Arizona, served a customer a raw chicken sandwich, a manager at the fast-food restaurant confirmed.

"Dining Guide: Where to Eat and Drink in Downtown Phoenix"

By Natasha Yee
A thorough rundown of dining and drinking options in downtown Phoenix, from morning brew to breakfast, lunch, afternoon pick-me-up, and late into the night.

"21 Bygone Restaurants in Greater Phoenix: Then and Now"

By Lauren Cusimano
The Phoenix area has had some fascinating restaurants. Here’s a look at 21 favorite Valley restaurants that have closed, and what those same spots look like now.

By Lauren Cusimano
Labeled as an inventive Mexican eatery, Mochilero Kitchen is set to open this fall at 67th Avenue and Happy Valley Road in northern Peoria on Phoenix's west side.

By Benjamin Leatherman
Everything you need to know about the newly opened David Bowie-inspired pizzeria next to The Van Buren, including its menu and prices.

By Lynn Trimble
Checking out the MAGA controversy at Jobot Coffee & Bar. 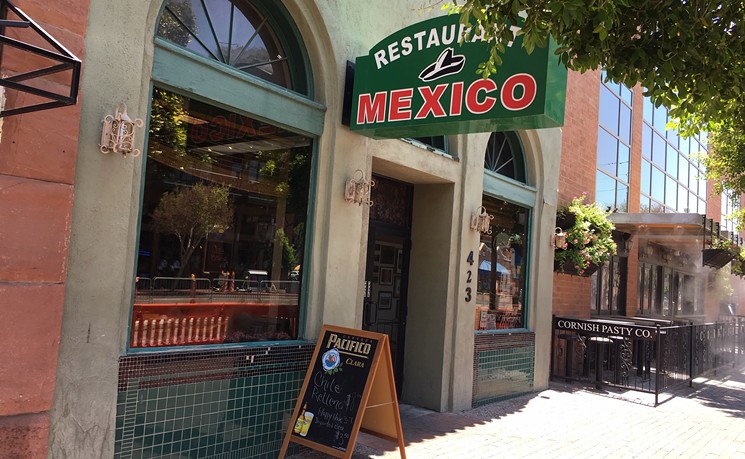 By Robrt L. Pela
Restaurant Mexico, long a Mill Avenue mainstay, is closing next month. “Everyone is sad about it,” a waitress named Lydia agreed when she came with a plastic basket of chips. “Our last day is August 15. It’s very sad. We’ve been around for 42 years. Twelve years at this location.”

By Lauren Cusimano
An opening date was released for Arizona's first White Castle near Scottsdale — Wednesday, October 23.
KEEP PHOENIX NEW TIMES FREE... Since we started Phoenix New Times, it has been defined as the free, independent voice of Phoenix, and we'd like to keep it that way. With local media under siege, it's more important than ever for us to rally support behind funding our local journalism. You can help by participating in our "I Support" program, allowing us to keep offering readers access to our incisive coverage of local news, food and culture with no paywalls.
Make a one-time donation today for as little as $1.