Three Food Stories From Phoenix That You Need to Read

The Colossal Loaded Fries & Rings is just one of the new menu items at Talking Stick Resort Arena. Courtesy of Phoenix Suns
The Phoenix Suns may not be winning yet, but the new menu at Talking Stick Resort Arena is undefeated this season. And we have two other stories from this past week to whet your future appetite and both of them involve Silvana Salcido Esparza. The Barrio Cafe owner will be one of the featured chefs at the the Devour 2019 Culinary Classic; in the meantime, she's continuing to scour the earth in search of the perfect barbecue to bring back to Phoenix. We'll stay tuned for that. 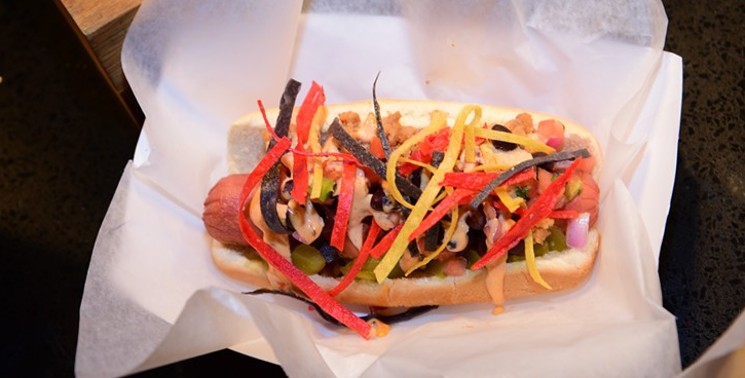 A main course from Kai at the Devour Culinary Classic in 2018.
Melissa Fossum
Devour Culinary Classic Announces 2019 Chefs Lineup
Devour Culinary Classic, our Best of Phoenix 2018 winner for Best Culinary Festival, will be returning to the Desert Botanical Garden on Saturday, February 23, and Sunday, February 24, 2019. The festival just released the lineup for its 10th anniversary celebration, and it's a doozy. The 2019 Devour will bring Tamara Stanger (Cotton & Copper), Silvana Salcido Esparza (Barrio Cafe), and Jeff Smedstad (Elote Cafe) as the three VIP chefs, plus a real who's who of other local talent. Devour will also bring chefs from Aioli Gourmet Burgers, Otro Cafe, Cafe Lalibela, Gallo Blanco, Beckett's Table, Southern Rail, Clever Koi, The Larder + The Delta, Hula's Modern Tiki, Sweet Republic, and more. To see the full list of talent, head to Devour's website. Tickets to the popular festival will go on pre-sale to members on Thursday, November 1, and to the general public on November 9. Set your calendars, because these tickets tend to sell out fast.

Esparza checking on meat and vegetables in her new upright smoker.
Chris Malloy
Barrio Cafe's Silvana Salcido Esparza Dreams of Barbecue, Part Two
Silvana Salcido Esparza, the pioneering chef at Barrio Cafe, is trailblazing again. She recently had a smoker custom-made for use at Barrio Cafe. A year ago, the first time we reported on Silvana’s dreams of barbecue, she was testing recipes for a barbecue joint she wanted to open in the distant future. Following a three-month journey to barbecue stands and shacks from California to Carolina, the future has clarified, the dream become more concrete. Esparza believes that barbecue came to America when the Chichimeca, the native people of northern Mexico, shared the secrets of pit barbecue with “the American cowboy.” “The Chichimecas were all the way up to Utah,” she says. “And so they were doing that technique [pit barbecue], as well as in New Mexico.” Now, at Barrio Café, Esparza is using wisdom from the road. She is experimenting, honing a progressive American-Mexican style that fits a chef who serves bread and olive tapenade — not chips and salsa — to open meals at her landmark Mexican restaurant.
KEEP PHOENIX NEW TIMES FREE... Since we started Phoenix New Times, it has been defined as the free, independent voice of Phoenix, and we'd like to keep it that way. With local media under siege, it's more important than ever for us to rally support behind funding our local journalism. You can help by participating in our "I Support" program, allowing us to keep offering readers access to our incisive coverage of local news, food and culture with no paywalls.
Make a one-time donation today for as little as $1.
Chow Bella