The annual screening event, which celebrated its 20th anniversary last year, returns with a collection of films from Western Europe and greater Los Angeles, spanning generations and emotions with productions telling stories of life after Auschwitz or during Israeli independence, to films about finding love and forging your own way.

The 18 featured films from Academy Award-winners and accomplished actors, writers, and producers include foreign dramas and documentaries, political thrillers, coming-of-age stories, and love stories alongside feel-good comedies about octogenarians and preteens alike. While the film festival offers something for everyone, here are six movies you won’t want to miss.

On The Map screens during the festival's opening day and will play at all three participating Harkins Theatres.
Courtesy of Greater Phoenix Jewish Film Festival
On The Map
This English-language documentary about a David-and-Goliath like sports match-up tells the story of the 1977 European Basketball Championship, in which the Israeli team defeated the Russians (then Soviets), who were four-time winners and defending champions. Directed by Dani Menkin and produced by Nancy Spielberg (sister to Steven), this underdog story is set in the aftermath of the Munich massacre at the 1972 Summer Olympics, and the 1976 hijacking of an Air France flight from Tel Aviv — during the throes of the Cold War.

Menkin, an Israeli Academy Award-winning filmmaker and instructor, will speak about the film and host a Q&A session after the opening day screening at Shea 14 on Sunday, February 12. Rabbi Jason Bonder, who played in the first (and only) season of professional baseball in Israel, will participate in a conversation with the audience after a showing at Chandler Fashion 20 the following Sunday.

Rosenwald
This 95-minute American documentary tells the story of Sears CEO Julius Rosenwald, who dedicated much of his wealth and life to abolishing segregation in schools. Rosenwald partnered with African-American communities throughout the South, building more than 5,300 schools and housing developments, and establishing the Rosenwald Fund in support of African-American artists and intellectuals. Rosenwald tells the story of the life and motivation behind this successful businessman, who was driven by the Jewish idea of tzedakah, or charity, to make a tangible difference.

The Rev. Ozetta Kirby, a Kentucky native who attended a Rosenwald school, will speak about her experiences following the film’s festival debut Sunday, February 12, at Chandler Fashion 20. Kirby, a retired educator, is the senior pastor of Holy Trinity Community AME Church. Warren Stewart Jr., the founder and leader pastor of the Church of the Remnant, will speak following a screening at Shea 14 the following Sunday.

Baba Joon tells the story of generational divide through the lens of the immigrant experience and personal passion.
Courtesy of Greater Phoenix Jewish Film Festival
Baba Joon
This coming-of-age drama follows a familiar premise of familial in-fighting, against the backdrop of generational disagreements and real-world conflicts. Set in Southern Israel, the film centers on an Iranian-Jewish family who has long been proud to own and operate a turkey farm. But while Yitzhak, the father, expects Moti, his son, to take up the practice as he had, the young boy has his own ideas and passions: Fixing cars. The film explores the growing tension between father and son, and is sure to resonate with any audience member who has staged their own parental rebellion. Written and directed by Yuval Delshad, Baba Joon is the first Israeli full-length film entirely in Farsi. (English subtitles.) 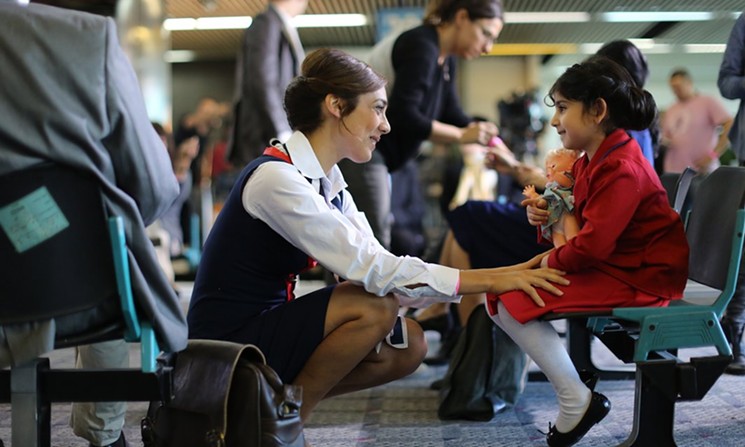 Sabena Hijacking is a docu-drama that recounts the previously untold story of Sabena Flight 571.
Courtesy of Greater Phoenix Jewish Film Festival
Sabena Hijacking: My Version
This docu-drama tells the story of the hijacking of Sabena Flight 571 in 1972. The flight was traveling to Tel Aviv when four members of Black September, the armed wing of the Palestine Liberation Organization, stormed the cockpit, demanding the release of more than 300 convicted Palestinian terrorists who were being held in Israel. Sabena Hijacking: My Version is told from the perspective of Captain Reginald Levy, the English pilot, chronicling the story of the crew’s 30 hours in captivity and the rescue mission to save the plane and its passengers.

Time To Say Goodbye is a German coming-of-age comedy (with English subtitles) about navigating through love and hormones.
Courtesy of Greater Phoenix Jewish Film Festival
Time To Say Goodbye
Viviane Andereggen’s German comedy follows 12-year-old Simon Grünberg as he navigates through puberty, puppy love, and his parents’ divorce. Simon finds himself in the middle of a parental tug-of-war, being shuttled between two homes while reconciling religious differences between a newly-observant father and a liberal-leaning mother. And amidst all the in-fighting and bar mitzvah preparation, Simon also finds himself in love — with a beautiful, young rabbi named Rebecca, who’s 20 years his senior.

Natalie Portman stars in A Tale of Love and Darkenss, which doubles as her directorial debut.
Courtesy of Greater Phoenix Jewish Film Festival
A Tale of Love and Darkness
Academy Award-winning actress Natalie Portman (Black Swan) makes her directorial debut with this 2015 drama based on the best-selling memoir from Israeli author Amos Oz. Set during the eve of Israel’s independence and its early years as a country, the film stars Portman as Fania, a woman struggling with marriage and motherhood, and Amir Tessler as Amos, her young child navigating life in Jerusalem. The film explores this moment in history through a deeply intimate portrait of family, depression, and loss.

Showtimes vary by film and theater. Individual, advance tickets are $11 plus fees. Film festival passes, which allow unlimited viewings at any venue, any time, are $150 each. For a full schedule, film details, and advance tickets, visit www.gpjff.org or call 602-753-9366 for more information.