After Outcry on Coronado Message Board, an Artist Paints Over Her George Floyd Mural 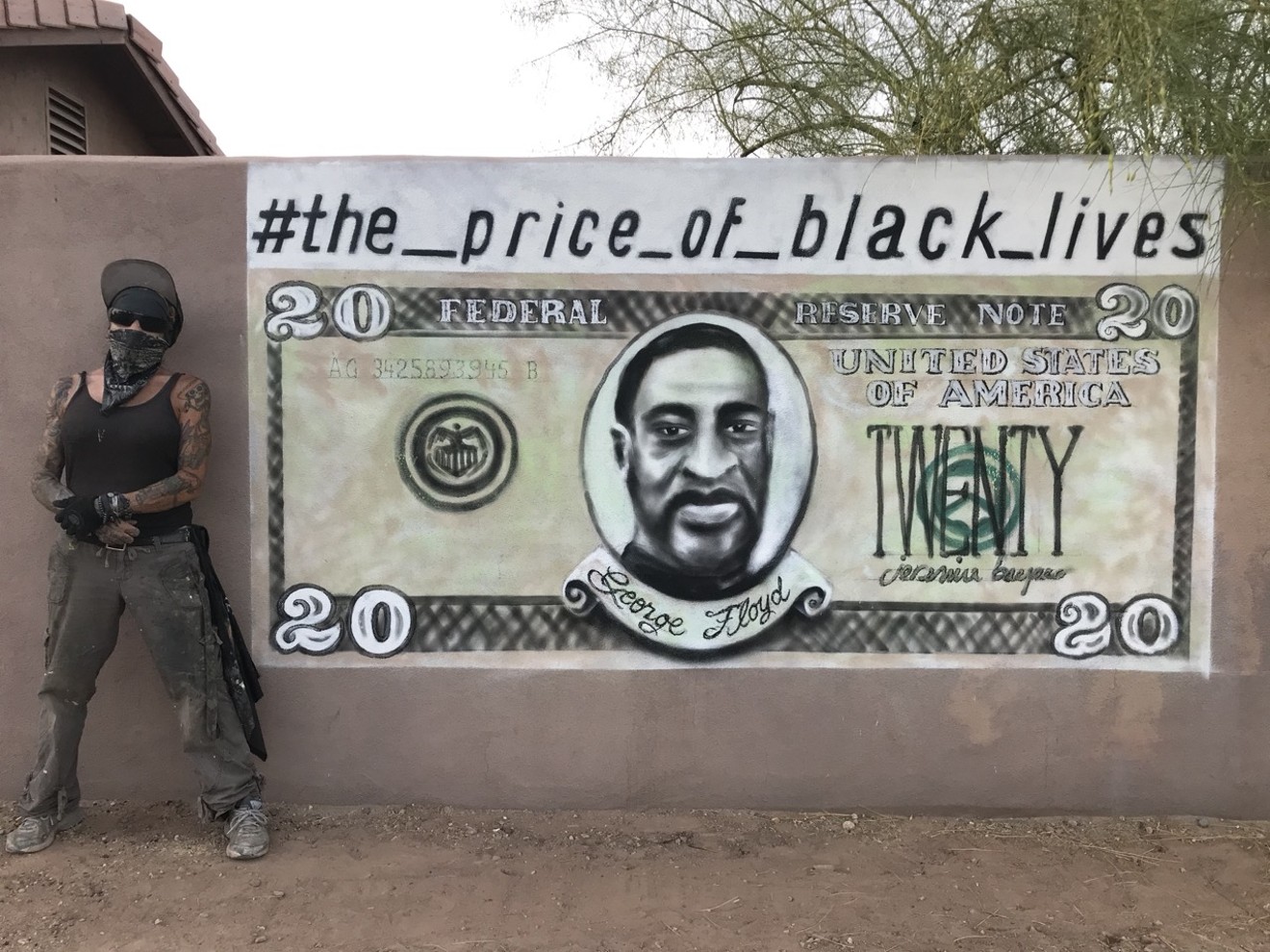 Franko created the mural in 2020, just days after a video of Floyd’s fatal May 25 encounter with Minneapolis police officers was widely broadcast and sparked nationwide protests. It’s titled The Price of Black Lives.

Her design set Floyd’s face in the center of a $20 bill, referencing the fact that police detained Floyd because a convenience store clerk alleged that he’d used a counterfeit $20 bill to make a purchase. She painted the mural on the corner of an alleyway at 15th and Oak streets.

After the mural was defaced in late March this year, several community members weighed in on the Coronado Message Board, a private Facebook group with about 2,700 members. Some expressed outrage about the vandalism, but others took issue with the artwork.

Kelvin West called for the mural to come down.

“This entire mural needs to be redone or removed,” he posted on March 29 on the message board. West shared the comment, and other parts of the mural-related thread, during the April 27 episode of his podcast 81 Degrees Kelvin. The video for his podcast is posted on YouTube.

During the podcast, West discussed the mural in the wider context of white violence and Black trauma, and his experiences as a Black man living in this particular area — topics he also addressed with Phoenix New Times.

“This neighborhood is not a safe space for black people,” he told New Times in a written message on May 2. “I have been combatting racism for five years as a homeowner in this neighborhood.”

For West, the mural is an example of Black voices not being heard. His March 29 post also included the following: “If you are going to do a mural like this I thinks [sic] important that the black people in the community have at least a say of the look and the artist.”

Artist Jeremie "bacpac" Franko painted over her George Floyd mural Phoenix.
Jeremie "bacpac" Franko
Franko says it was never her intention to speak for Black people. Instead, she considers the mural an expression of her own reaction to Floyd’s death. “I painted it because I had empathy with one particular person,” she told New Times by phone on May 2. In an email to New Times, she referenced the fact that some people have called her "a white woke hero."

"I never did this art to be a white hero, and I did it because that was what I wanted to express. I didn't need to go to the black community to ask what I was feeling. I have compassion towards human beings. I have plenty of incidents with police to have enough of my own anger of what I saw coming out of the newsreels from George Floyd's death. I don't have to ask permission to feel empathy for any man being brutally murdered."

But despite her embrace of artistic freedom, Franko removed the mural on April 30.

"I painted over it because I create public murals to have conversations, and I do hope they provoke debate, but I do not create them to make any one individual uncomfortable, hateful, or angry."

Franko covered the mural with tan paint matching the wall where it was located, which is part of a larger informal arts space called Oak Street Alley. Dozens of muralists have been painting small works in the alley just east of 14th Street for many years, and the George Floyd mural was always intended as a temporary piece.

Of course, this isn’t the first time mural art has caused controversy in Phoenix.

In 2018, some residents of the Willo Historic Neighborhood, which runs from Thomas to McDowell roads between First and Seventh avenues, objected to artwork created during a mural festival. Months later, the city held a public meeting to discuss murals in historic neighborhoods, which drew more than 200 people.

Now, West is hoping that conversations about the George Floyd mural will help to highlight Black voices in the community. “What I would like to see happen is what has happened, that Black voices be elevated and repeated and heard.”
KEEP PHOENIX NEW TIMES FREE... Since we started Phoenix New Times, it has been defined as the free, independent voice of Phoenix, and we'd like to keep it that way. With local media under siege, it's more important than ever for us to rally support behind funding our local journalism. You can help by participating in our "I Support" program, allowing us to keep offering readers access to our incisive coverage of local news, food and culture with no paywalls.
Make a one-time donation today for as little as $1.