Partying during Labor Day weekend at the W Scottsdale. Benjamin Leatherman
There are a few activities that are the hallmark of every Labor Day weekend, such as parades, barbecues, staycation specials at resorts, and fun runs. Oh yeah, there are also pool parties. Lots of pool parties, be they of both the backyard or more public variety. As a matter of fact, many high-end hotels around the Valley will be hosting swim soirees during the three-day weekend, as well as venues that feature an on-site pool.

They won’t be the only sort of celebrations happening during LDW 2018, and numerous club and nightlife events are also planned. A few even feature celebrities.

Here’s a complete rundown of the Labor Day weekend party scene in the Valley of the Sun. 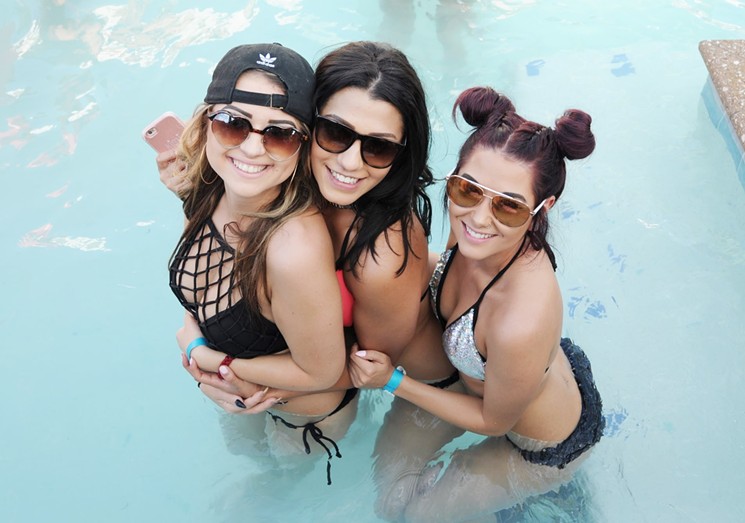 LDW shenanigans at Maya in Scottsdale.
Benjamin Leatherman
Maya Day & Nightclub in Scottsdale
The indoor nightclub at Maya will host Bingo Players on Friday, August 31. Doors are at 10 p.m. Tickets are $10. The latter half of Labor Day weekend at the club will be dominated by pool parties in the . Tritonal will headline on the first one on Sunday, September 2. Gates open at noon and admission is $10. An event bigger celebration happens on Labor Day when EDM trio Cash Cash and R&B artist Nelly hold it down. Tickets are $20 and the event starts at noon.

The Saguaro Hotel in Scottsdale
This posh boutique hotel in Scottsdale will serve up fun in the sun during two separate pool parties over Labor Day weekend. A special edition of the ongoing Swim Meet party series takes place on Saturday, September 1, and will feature local DJs Trill Tone, Lick, Soloman, and Convince in the mix. The following day, the Sun Dream party takes over and offers a mix of DJs, drinks, and other fun. Both events run from 1 to 5 p.m. and have a $20 admission.

Monarch Theatre
Electronic dance music will bump from the sound system at the Monarch on Saturday, September 1, as DJ/producers Eptic and Kompany blast out bass-heavy sounds. The 18-plus event starts at 9 p.m. Admission is $20-$35.

Salt in Glendale
This Westgate tacos and tequila joint will host three straight nights of dance parties this weekend, each with its own guest DJ. Brooke Evers will perform on Friday, Politik will take over on Saturday, and the DJ duo of Deux wraps things up on Sunday. Each party starts at 9 p.m. and has a $10 cover (you can get in free before 11 p.m. if you RSVP online).

Hi-Fi Kitchen & Cocktails in Scottsdale
Jersey Shore may have faded in the mists of pop-culture history, but the show's over-the-top mixmaster DJ Pauly D is still a thing. He'll be at Hi-Fi in Scottsdale on Sunday, hosting and performing at their Labor Day weekend shindig. The gig starts at 8 p.m. and tickets are available at the door.

Kick it at the W during LDW.
Benjamin Leatherman
W Scottsdale Hotel
Festivities of the posh variety will take over the W for three straight days from Saturday, September 1, to Monday, September 3. In addition to its usual brand of high-end cocktails and high-style amenities, different DJs will fill the air with dance music at various points throughout the weekend. The W’s resident DJs will be in the mix during the day followed by after dark performances by local musicians in the Living Room lounge. The parties start at noon each day. Tickets are $20 per person and various room and amenity packages are available.

The Van Buren
You can get a sneak peek of next month’s Goldrush Music Festival on Sunday, September 2, at The Van Buren. EDM artists Chris Lake, Walker and Royce, Dateless, and Lucati (all of whom are scheduled to play the festival) will perform at the Goldrush Expeditions party, which kicks off at 9 p.m. Tickets are $29.

Yucca Tap Room in Tempe
If you're in the mood for live music, particularly of the local variety, swing by the Yucca Tap Room on Sunday, September 2. for this multi-band show. The lineup will include sets from Dr. Delicious, Aunt B, the Will From Brazil Band, Manic Monkeys, Page the Village Idiot, and Marc Norman. Start time is 6 p.m. and there’s no cover.

Cobra Arcade Bar
Get both your game on and drink on during Cobra's pre-Labor Day party on Sunday, September 2, which will feature spin sessions by DJ Chris Villa and Meanmugg. They'll be serving drink special, too. Level up starting at 8 p.m. Admission is free.

Harold’s Cave Creek Corral
Were you bummed out by the fact the Fourth of July fireworks over Cave Creek were ? The folks at Harold's will make up for it during the Labor Day Fireworks Show on Sunday, September 2. The family-friendly event will kick off at 5 p.m. and include live music, food and drinks, games, and more. Admission is free. Living it up at Lustre Rooftop Bar.
Benjamin Leatherman
Lustre Rooftop Bar
The Hotel Palomar’s outdoor lounge will serve up four straight days on poolside celebrations from Friday, August 31, to Monday, September 3. Each will offer specialty cocktails, barbecue, and DJs like Stoneypie and Nate G. laying down the sound. Doors open at 11 a.m. each day and the events go until midnight. Admission is free.

FOUND Phoenix Hotel
This stylish downtown destination will do its best Catalina Wine Mixer impression with their Summer Overboard Pool Parties, which happen on both Saturday, September 1, and Sunday, September 2. The affairs will offer $8 Yacht Club vodka drinks and music from DJ Craig Conrad. Per the theme, yacht attire is encouraged. Both parties run from 11:30 a.m. to 5:30 p.m.

Old Town Gringos in Scottsdale
A three-day fiesta featuring live music, DJ drink specials, and other distractions will take place at OTG over LDW from Friday, August 31, to Sunday, September 2. Wear stars and stripes and you can score $2 margaritas. Bartenders will also serve $7 Red Bull slushies and $5 pina . Hours are from 11 a.m. to 2 a.m. each day. Admission is free.

Q-Lounge
Light up your Labor Day weekend at Q-Lounge's Labor Day Glow Party on Sunday, September 2. Tons of glow toys will be given away to patrons and DJ Nicaso will get the dance floor moving with Top 40, R&B, and Latin dance jams. Doors are at 9 p.m. Cover charges will vary.
KEEP PHOENIX NEW TIMES FREE... Since we started Phoenix New Times, it has been defined as the free, independent voice of Phoenix, and we'd like to keep it that way. With local media under siege, it's more important than ever for us to rally support behind funding our local journalism. You can help by participating in our "I Support" program, allowing us to keep offering readers access to our incisive coverage of local news, food and culture with no paywalls.
Make a one-time donation today for as little as $1.